Clair, Slim, Dali and Me

MARCH 17, 2010
Many years ago I was doing drawings for a novel by Hollywood screenwriter Clair Huffaker. The Cowboy and the Cossack was a kind of Red River Meets Doctor Zhivago, the story of a cattle drive from deep in the heart of Texas to the steppes of central Asia. I did pencil sketches for the book, the author loved them and asked for more. I did more. Then he called one day and asked to meet me. He didn’t say why. 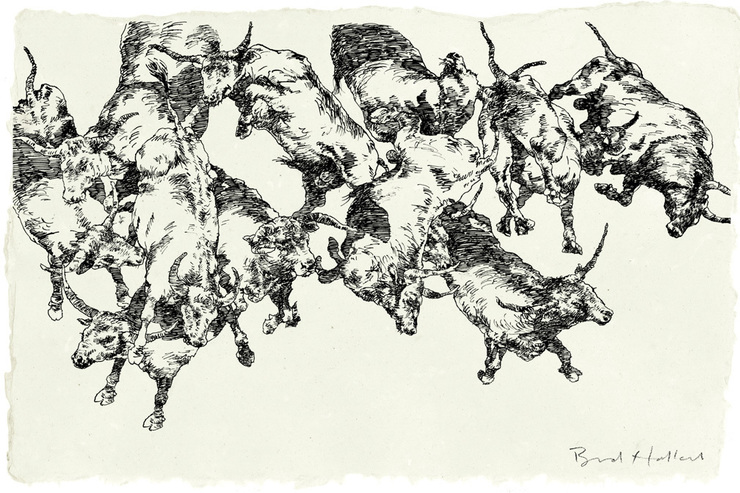 A few days later, he called again to say that he and Slim Pickens, the cowboy actor, had flown in from Hollywood and wanted to talk with me. They were staying at a suite at the St. Regis.

He said he had brought Slim along because Slim was a cowboy artist of sorts and had been a rodeo rider before he became an actor. He said Slim would be just the guy to give me some tips on the details in my sketches. He said he did love the drawings I had done for the book, but he said I had gotten some of the details wrong: cowboy gear – chaps and hats, spurs and saddles. Besides, he said, he wanted the cowboys to be more manly than I had drawn them. That was the most important thing, he said: they had to be more manly.

He told me Slim could explain why the characters in the drawings should all look like the Marlboro Man. 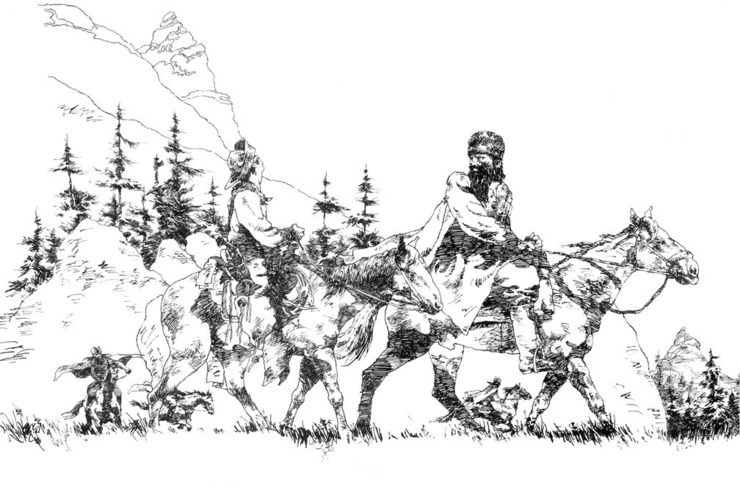 Well, I was in no mood to be drawing Marlboro Men, but one of my favorite movies was Dr. Strangelove, where Slim Pickens plays a B-52 pilot who rides a Hydrogen bomb like a bucking bronco down into Russia and sets off a thermonuclear war. How could I pass up a chance to spend the afternoon talking cowboy talk with him? So I bundled up and headed for Fifty fifth and Fifth. 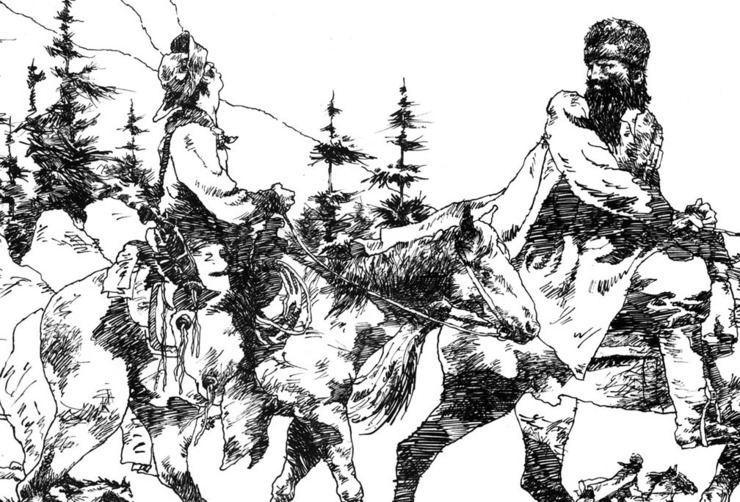 Now this was St. Patrick’s Day and by the time I got to the St. Regis, the Pickens suite was like a clubhouse of sorts, crawling with celebrities and authors of Clair's acquaintance.

One of the visitors was an editor for Trident Press, a division of Simon and Schuster, Clair’s publisher. He was an old newspaper veteran who blew in, mid-afternoon, wearing one of those big green cardboard hats that drunks wear on St. Patrick’s Day. He spent the whole afternoon with the hat on, telling stories and dirty jokes and keeping a limousine waiting downstairs.

I told him I got his drift and he went back to telling me wife jokes, all of which I’ve forgotten.

Well, by five o’clock or so, I’d been drinking Wild Turkey with these characters for hours. Somebody began turning on the lights and I suddenly realized that it was getting dark outside.

Then I noticed that the editor was gone and somehow I had inherited his cardboard hat. I still can’t remember how I ended up with that.

But there I was, sitting on the sofa with Slim Pickens, wearing a big shiny green hat, talking about Frederic Remington and Charlie Russell and the old west, and doodling cowboys, cows and horses with a ball point pen on the big manila envelope I had brought my drawings in. 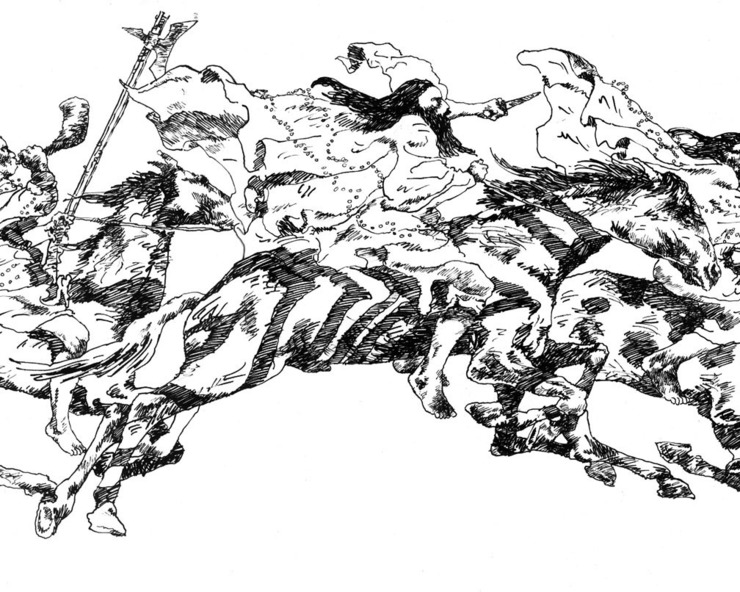 Slim didn’t think much of Frederic Remington he said - and he could tell that I had used Remington’s paintings as source material for how cowboys dressed. I said I liked Remington. 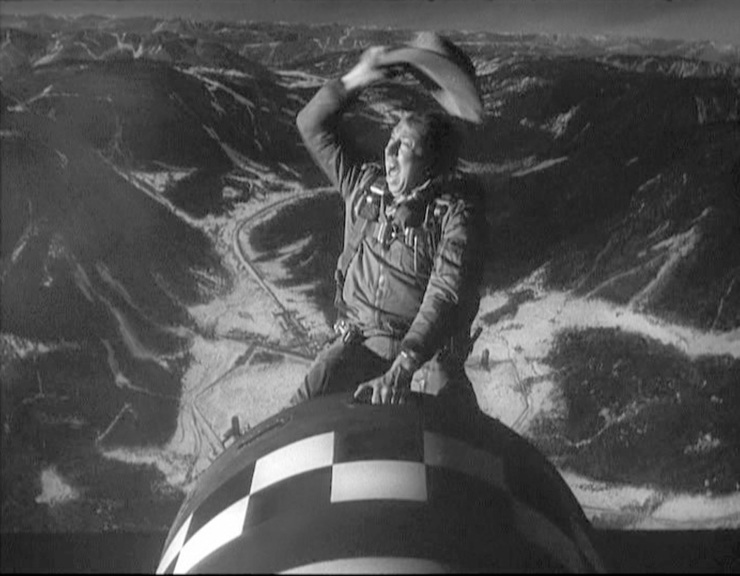 I told him my favorite film of his was Dr. Strangelove: “That scene where you ride the bomb down is one of the great movie scenes of all time,” I said.

He seemed pleased to hear that, but he said, “Hell, did you know that movie was supposed to be a comedy? I didn’t.”

He told me they had filmed the movie on a set in London. He was hung over from a night of drinking. He had met some B52 pilots at a bar the night before and he brought them along to watch him shoot the scene. They were “real impressed” he said, with the mockup of the B52. “They wondered how Stanley had got all the details in the cockpit right. ”That was supposed to be classified information.”

Suddenly, the phone rang in the suite. Clair answered it and took the call in one of the bedrooms – he had pretty well rid the place of celebrities by then. Then he came back a few minutes later to tell Slim that “the stewardesses are on their way.”

I took the hint and volunteered that it was time for me to hit the road.

It took another few minutes for Slim to wrap up his story – about how the suits at Columbia Pictures had walked out of the first screening of Strangelove, stunned and speechless, certain that Kubrick had laid an egg. But Clair cut into the story to say he needed to have a word with me, privately.

He led me into the adjoning bedroom and we sat there on opposite beds, facing each other with the lights off. If you had walked by the open door right then and looked in, you would have seen two shadows talking. 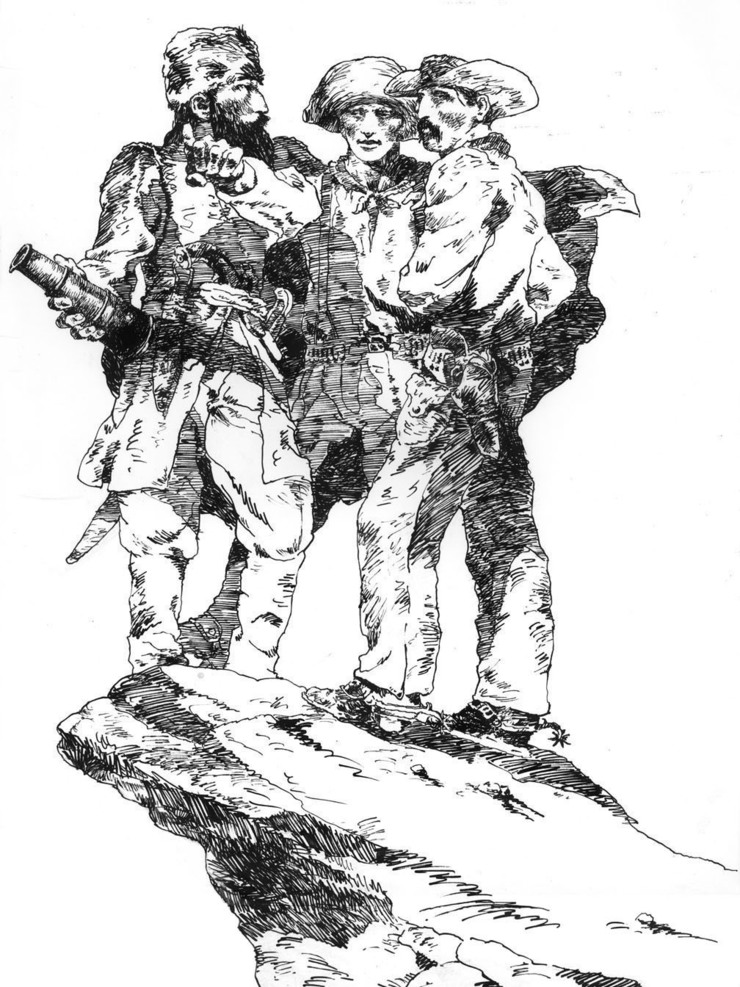 Clair told me this book was very important to him. He had written his first novel just after graduating from Columbia – he’d “studied there under Van Dorne" – and although he was from “out west,” he said, he wrote that first book in the New York Public Library. Hollywood scooped it up and with a little tinkering it became Flaming Star, an Elvis Presley flick. 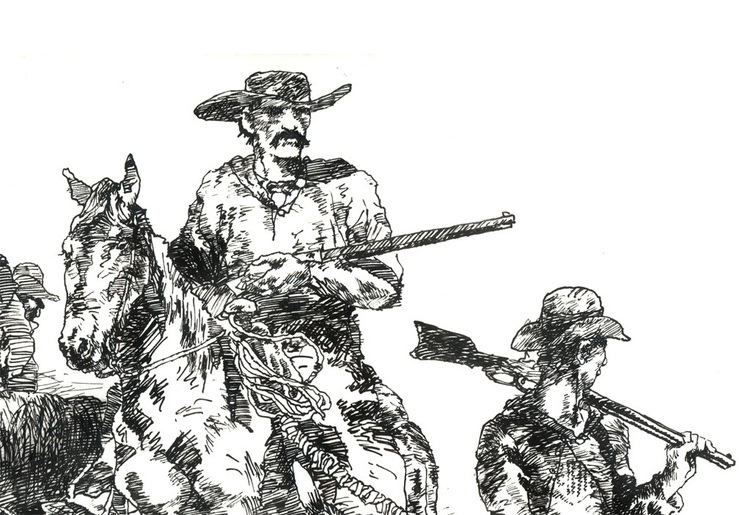 Ok, so now he was a successful screenwriter. But in his mind novelists were still the real deal. He mentioned Irwin Shaw, James Michener. Their work was big in the movies but they were still recognized as big shot novelists. He wanted The Cowboy and the Cossack to be a best seller. He wanted to see it turned into a hit movie. He saId my drawings were great, but the cowboys weren't manly enough. Think John Wayne, he told me. Think Red River. Think Marlboro Man. 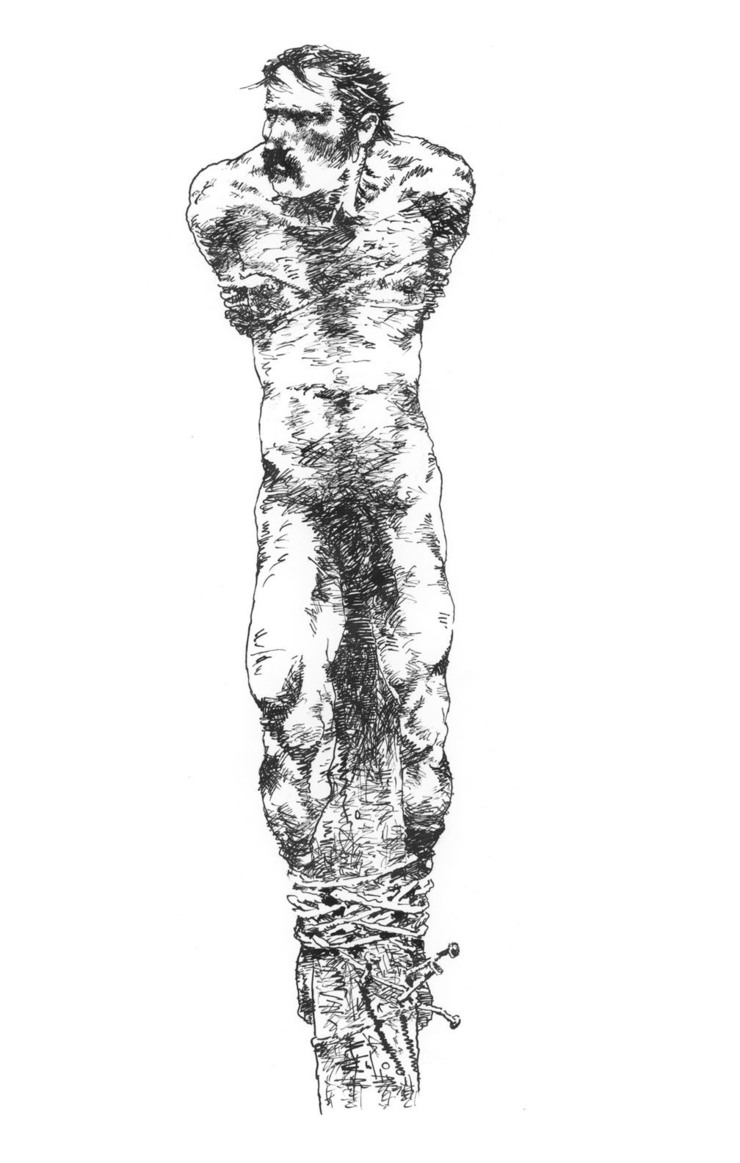 When I got back to the front room, the stewardesses had arrived and were settling in with their drinks. Slim was charming them with movie stories. I tipped my cardboard hat to everyone, said hello-I-must-be-going, and took my leave. 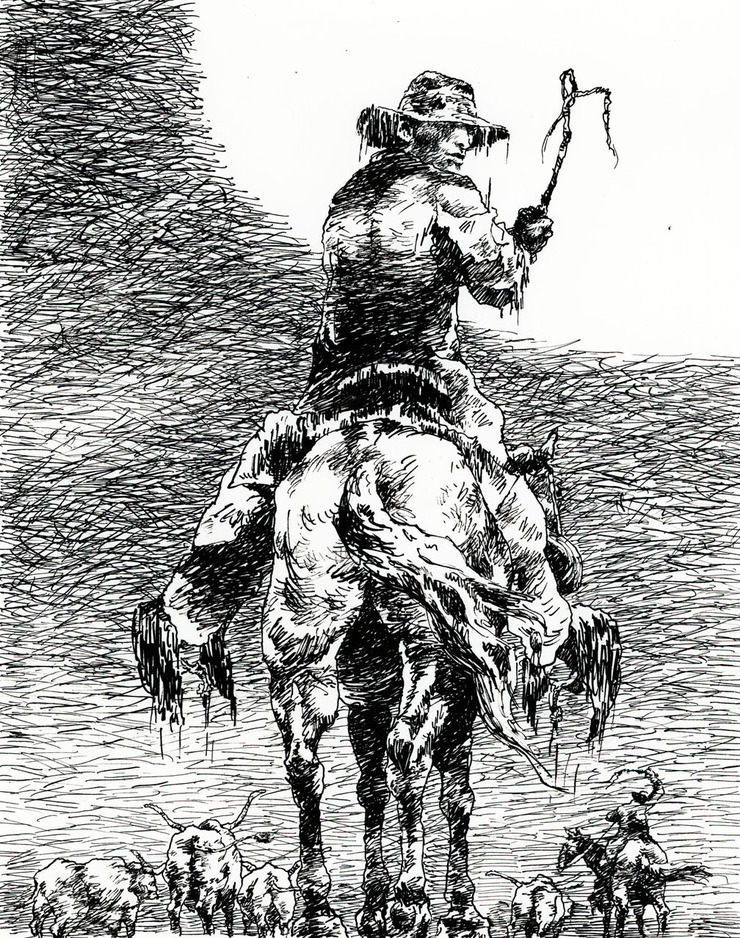 Outside I roamed the halls of the St. Regis looking for the elevators amidst all the various other doors.

The St. Regis is a legendary hotel. It’s the home of the King Cole Bar and the Maxfield Parrish mural that gave the bar its name.

It’s the birthplace of the Bloody Mary, the hotel where Bernie Schwartz shined shoes before moving to Hollywood and becoming Tony Curtis.

It’s the hotel where Marilyn Monroe stayed while she filmed The Seven Year Itch, the place where the papers said Joe DiMaggio had beat her up and ended their marriage.

I’d been downstairs in the bar before, but never up here. Now here I was, drunk and happy, roaming the halls of this legendary hotel, looking for a way out. Finally I found the row of elevator doors. Steadying myself, I pushed the down button and waited. Everything around me was a blur.

Then the elevator came, the door opened and there was Salvador Dali.

Perfect, I thought. Who else should I expect to find in an elevator on a day like this? 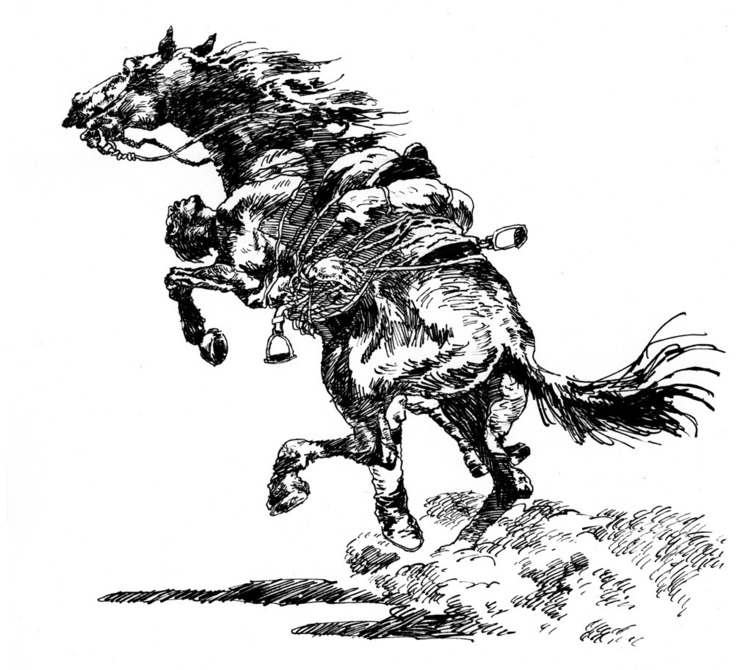 Dali was just a little shorter than me and dressed for a night on the town. He was wearing an ankle-length fur coat and black horn rimmed glasses. Beside him was his wife, Gala, dressed in a matching fur coat and glasses. The two of them together looked almost like twins, nearly identical, except that Dali’s mustache was waxed.

As for me, I still had the shiny green cardboard hat on my head and the big manila envelope with cowboy drawings on it tucked under my arm. 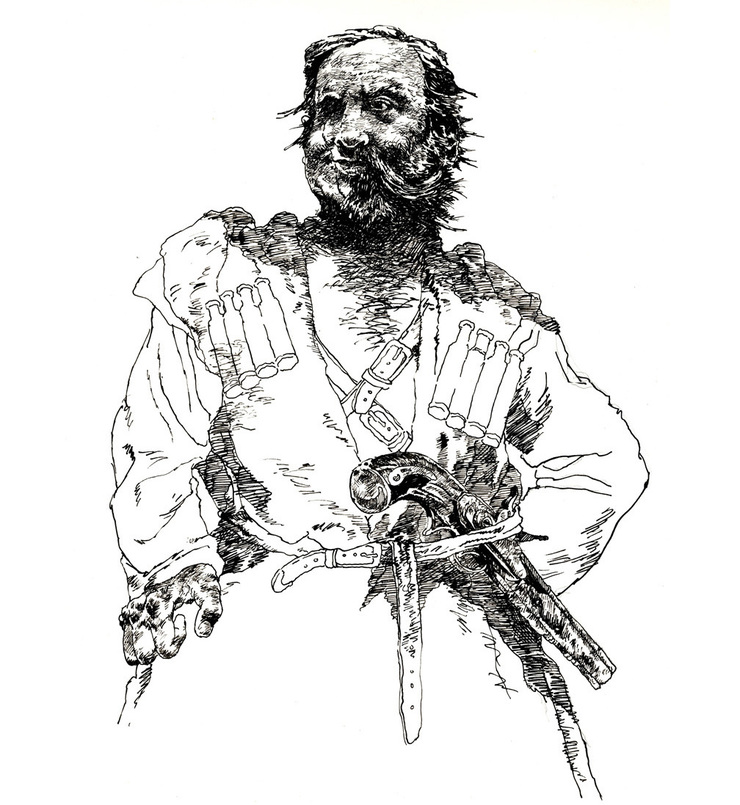 Well, how do you say hello to Salvador Dali? Luckily I was dressed for the moment. I tipped my big green hat to him and stepped inside. We stood shoulder to shoulder. Besides Dali and the Missus there were several other people packed in around us, all dressed like Fred Astaire and Ginger Rogers  – Dali’s posse, I imagined – but nobody was speaking.

In the awkward silence, I turned to look at Dali and saw that he was cocking his head like a puppy, looking sideways at the ballpoint pen doodles of cows and cowboys on my big yellow envelope. 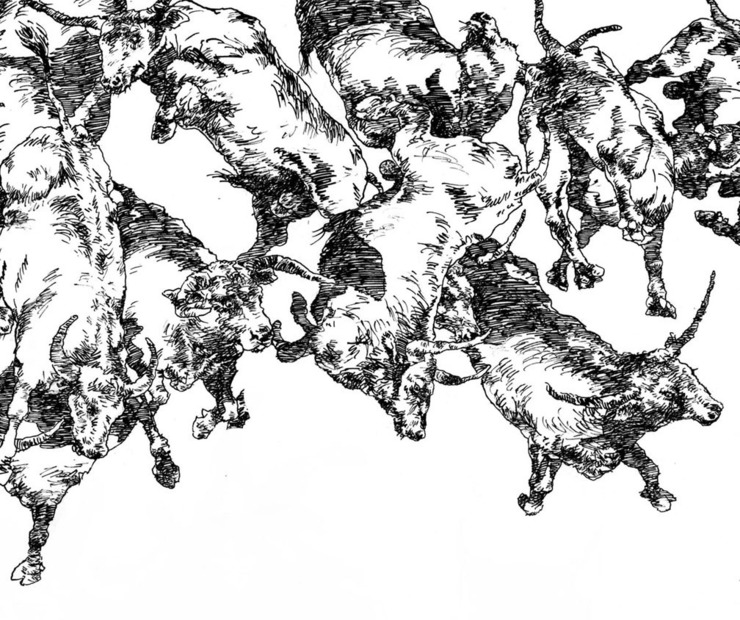 Finally Dali looked me in the eye. “Are you an artist?” he asked. I was surprised that he spoke such fluent English.

“Where are you from?” he asked.

“Ohio!’ he exclaimed. ”Cleveland! Everybody loves Dali in Cleveland. He seemed proud to demonstrate that he knew his way around the American Midwest.

“Well, they may love Dali in Cleveland,” I said. “But I come from a little town called Fremont, where they think Dali is crazy as shit.” 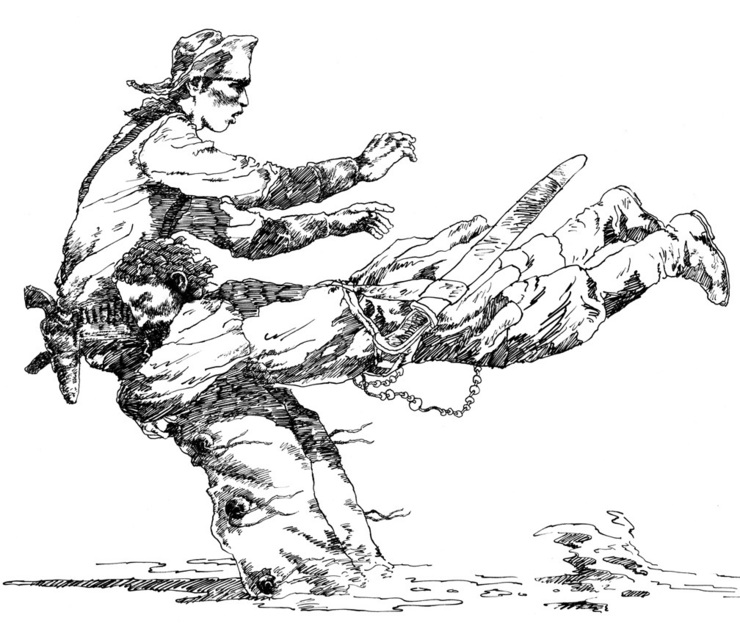 For a split second, there was stunned silence all around. Then Dali burst out laughing. The posse took their cue and laughed too. But not Gala. She froze.

I had seen her face in Dali’s paintings since I was 17. But she didn’t look like the holy Madonna this day or Leda making love to a swan. She glared at me with a face like Medusa’s, then turned the same icy stare on her husband as if to say: “Look at yourself! You’re Dali! And you’re talking to a jerk in a cardboard hat!” 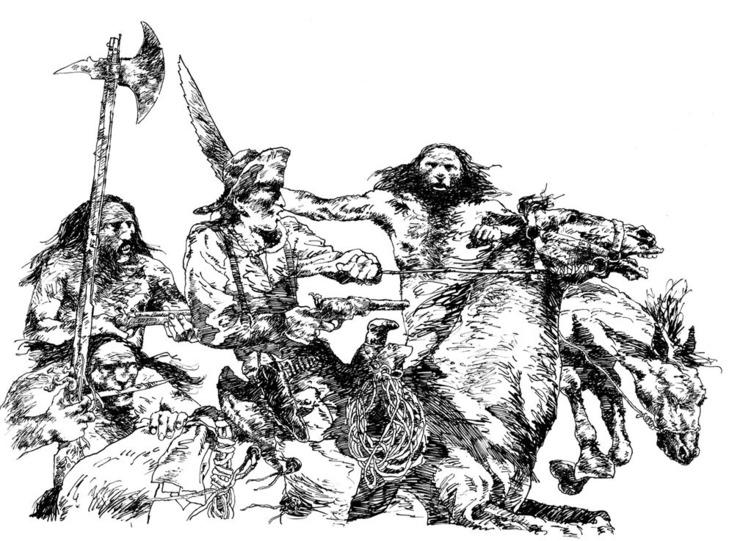 Well, it was a short ride to the lobby. Salvador and I – we were on a first name basis by then - wished each other a good life and went our separate ways. I never saw any of these characters ever again. Later, I learned from Art Paul at Playboy that Dali lived at the St. Regis and often used the King Cole Bar as a sort of office. Art had met him there on occasion to commission paintings for the magazine. 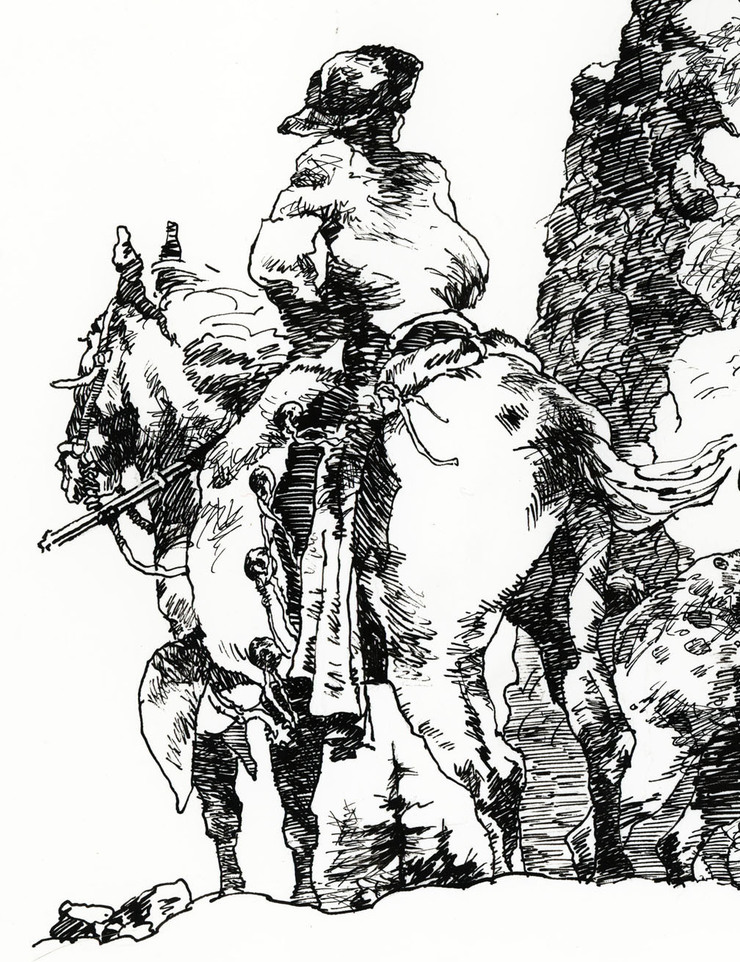 Unfortunately, The Cowboy and the Cossack never made it to the big screen. That’s a pity, I think. I’d come to like Clair. As for Slim, when I did the finished drawings, I made him one of the characters. In case they ever did make the movie, I thought, at least he’d have first crack at the custom designed part. 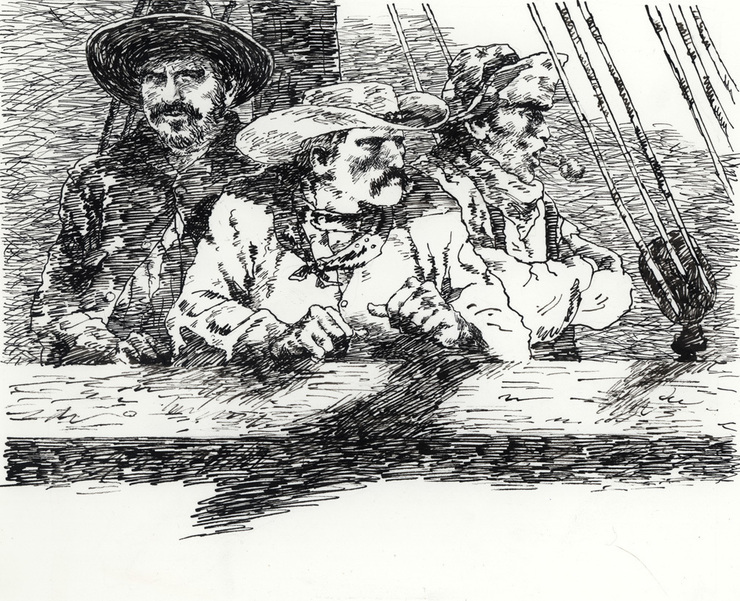 A few years ago, some guy emailed me, asking for a complete set of 18 prints from the book. After he got them, he wrote to ask if there were any anecdotes behind the drawings. I said I’d try to write up something and send it to him, but I never got around to it.

Maybe I should send him a link to this article. 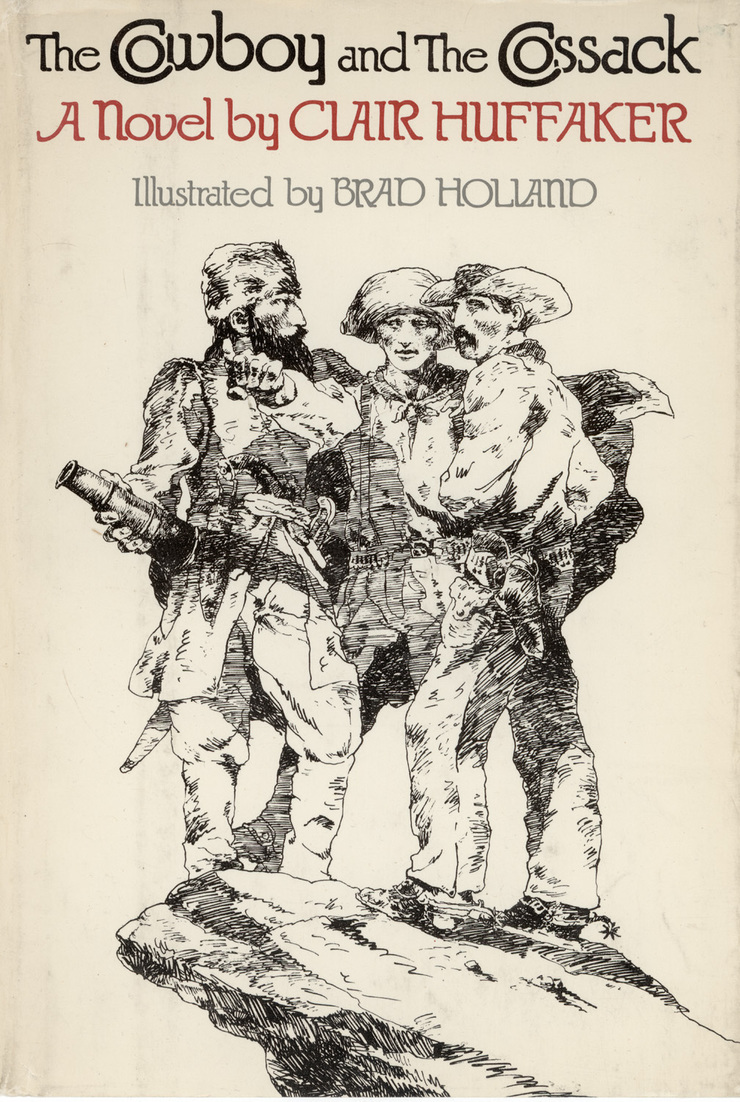 Text © 2010 Brad Holland / Drawings © 1973 Brad Holland. The Cowboy and the Cossack by Clair Huffaker was published by Trident Press, New York, 1973. The Art Director was Frank Metz. Book jacket typography was by Wendell Minor. This article is excerpted from a 2009 interview conducted by Irene Gallo, Art Director of Tor Books. The image of Slim Pickens riding a Hydrogen bomb is, of course, a still from the movie Dr. Strangelove, directed by Stanley Kubrick.