MAY 17, 2018
Print Online has just published a short conversation Steve Heller and I had last week about the hand lettered posters I've been doing over the last few years, drawing pictures to go with quotes from articles I've written and lettering the quotes to match the drawings.

As Steve explains in his introduction, he and I met 50 years ago this month. I had just started doing monthly assignments for Playboy and Steve had just begun his career as art director of The New York Free Press, a dying local weekly that quickly morphed into the sex paper Screw and its spin-off The New York Review of Sex and Politics. It was Steve's gift of the editorial page at the Review of Sex that gave me a second venue (Playboy was the first) to develop the conceptual approach to picture making that we took to the New York Times two years later when they created the Op-Ed page. As I explained in our little exchange, the genesis of these posters was a rookie attempt at this kind of thing in my first portfolio. This is a slightly extended version of the piece in Print. 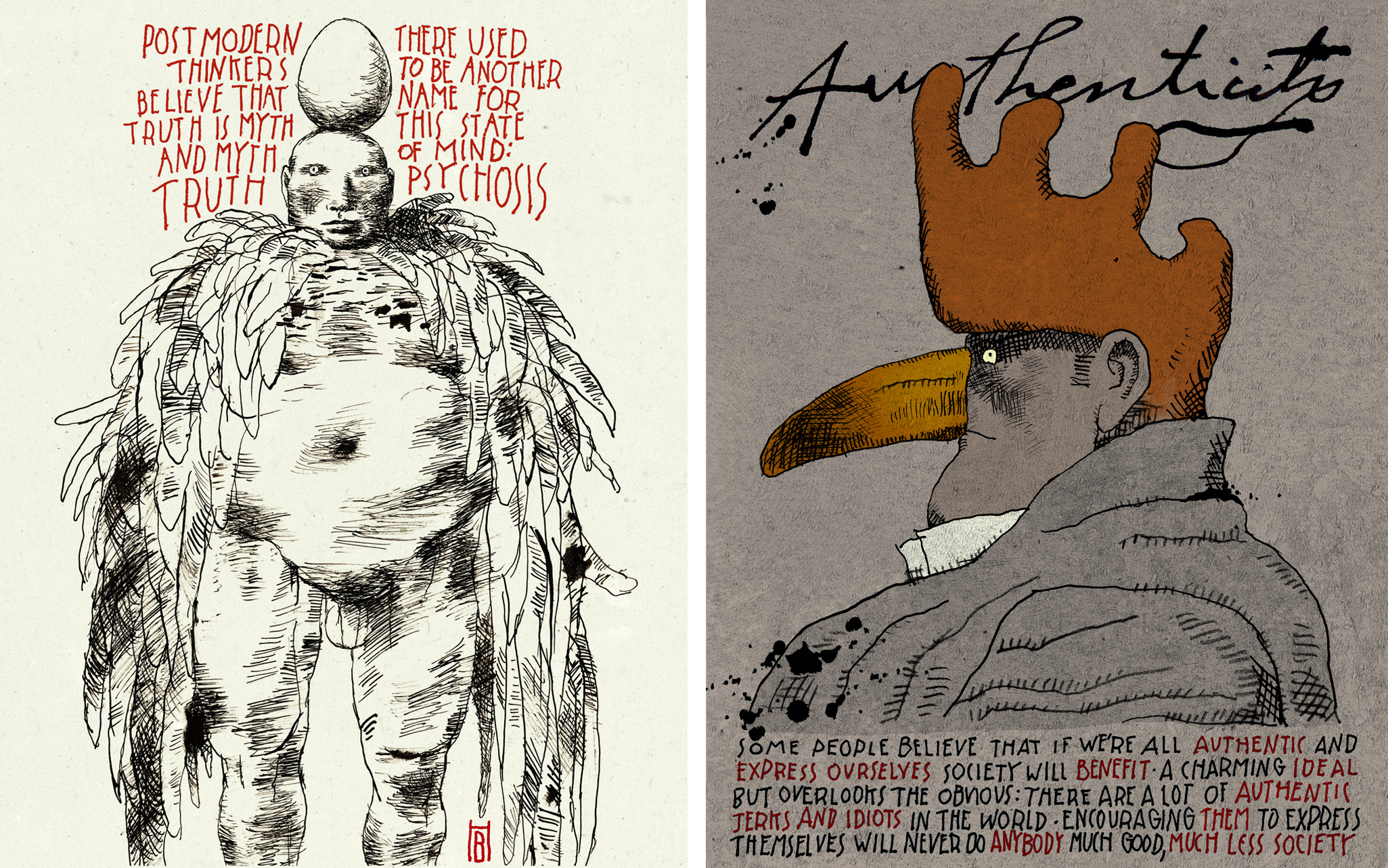 Q: You once said that your pictures needed no words. But these are words? Why?
A: Well, actually, this whole project began back in 1967, on my first day in New York. It just took me a long time to get around to it. 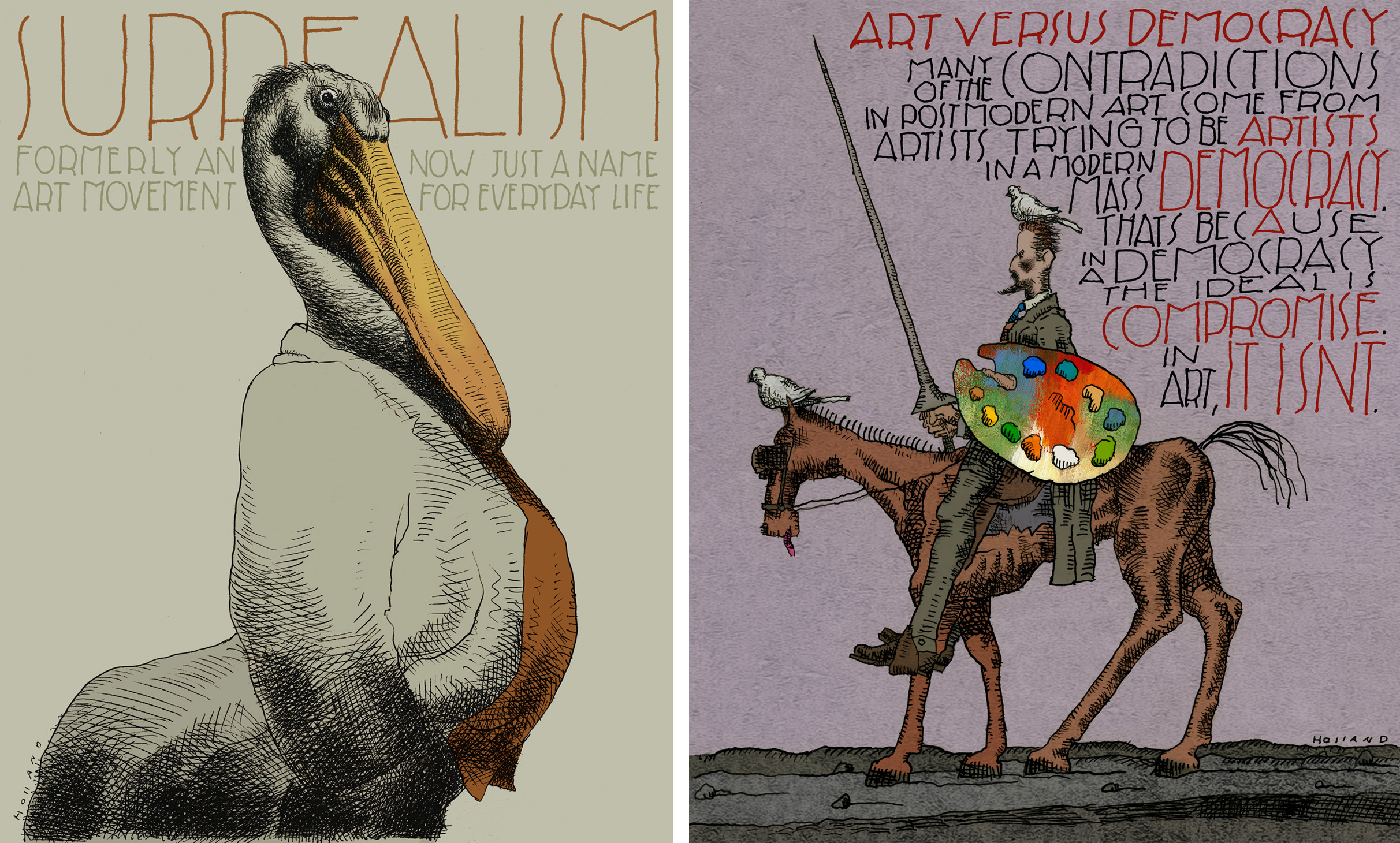 Q: I'll say! So how did it begin in 1967?
A: Well, as you know, I showed my portfolio to Herb Lubalin that first day and he gave me an instant assignment for Avant Garde. But he also suggested publishing a portfolio of my drawings in a later issue. He just said we'd have to find an editorial hook to hang the pictures on. So he gave me the publisher's address and phone number and told me to call him. 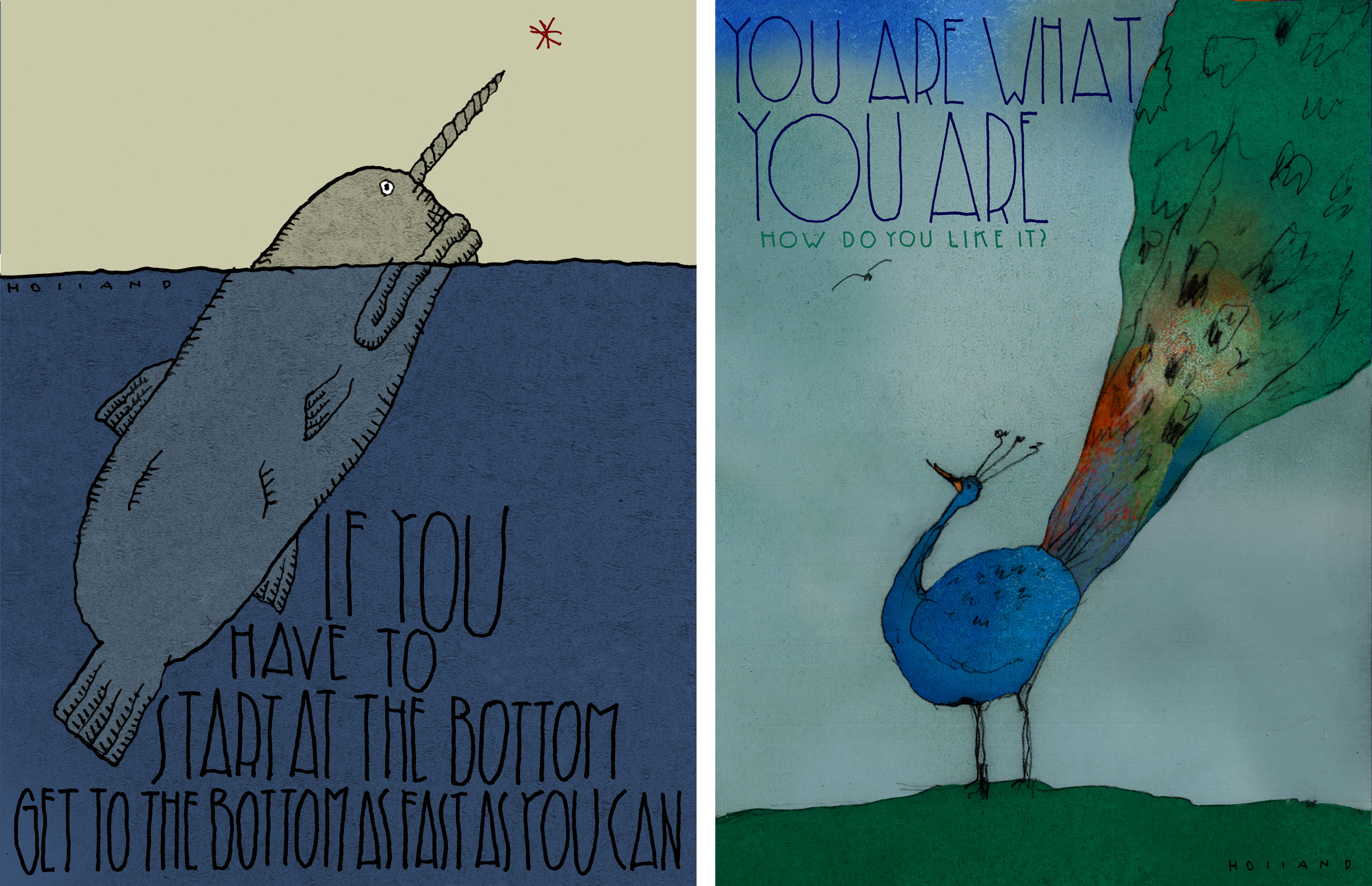 Q: Ralph Ginzburg. So did you call?
A: Yep, as soon as I finished the piece for that first issue. Ginzburg had an office right behind Bryant Park and I met him there. He was gracious and spent half an hour with me. But he had just lost an appeal for a pornography conviction and was scheduled to report to Allenwood in two weeks. So he was preoccupied with finding somebody to edit the magazine while he was in the clink. He suggested I look him up again when he got out. 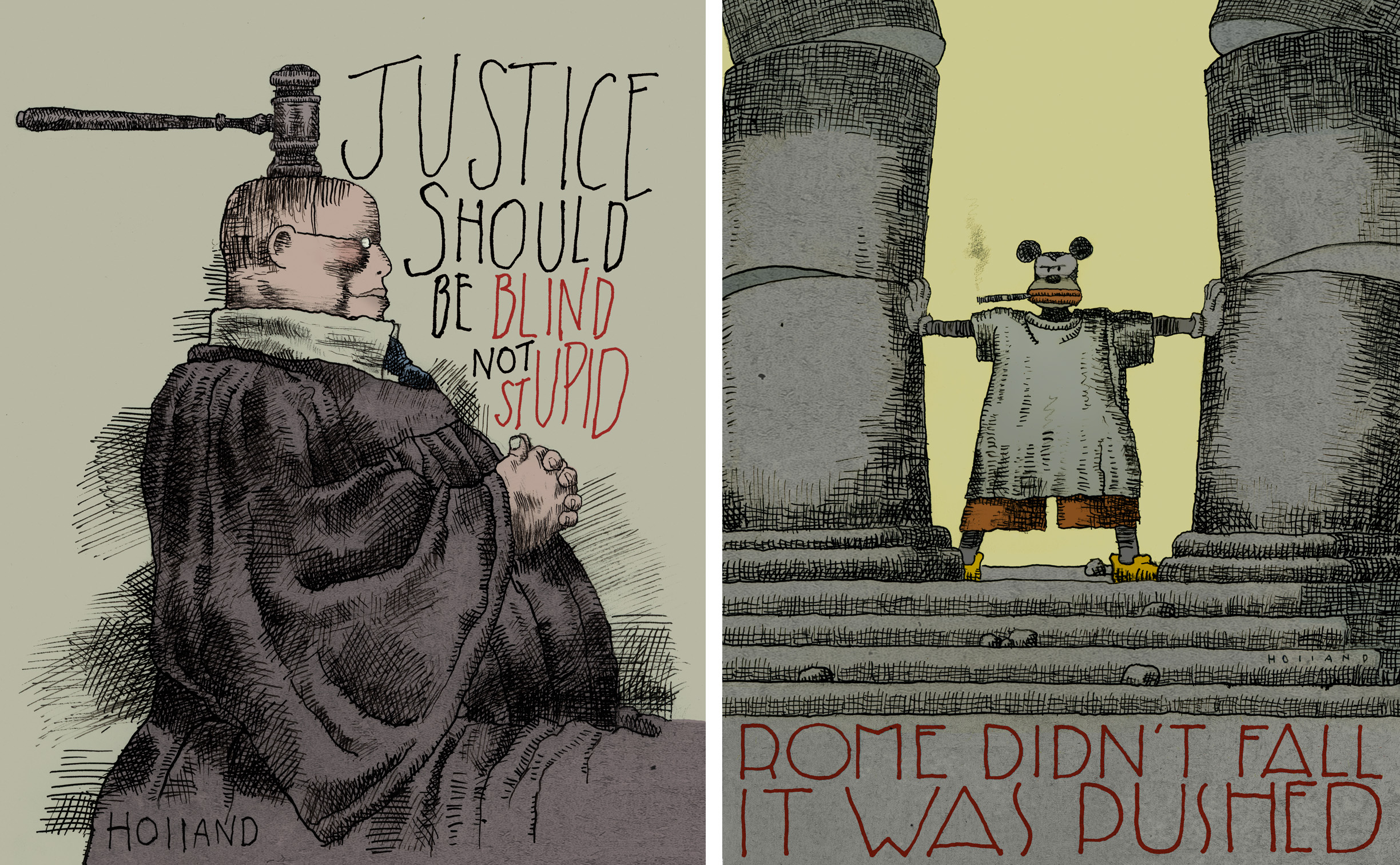 Q: So how did that lead to these hand lettered drawings all these years later?
A: Well, one of the suggestions Lubalin had made was that we find famous quotations to go with my drawings. Either using them with his typography, or maybe having me hand letter the quotes myself. I had a sample like that in my portfolio. But we never discussed the matter further. 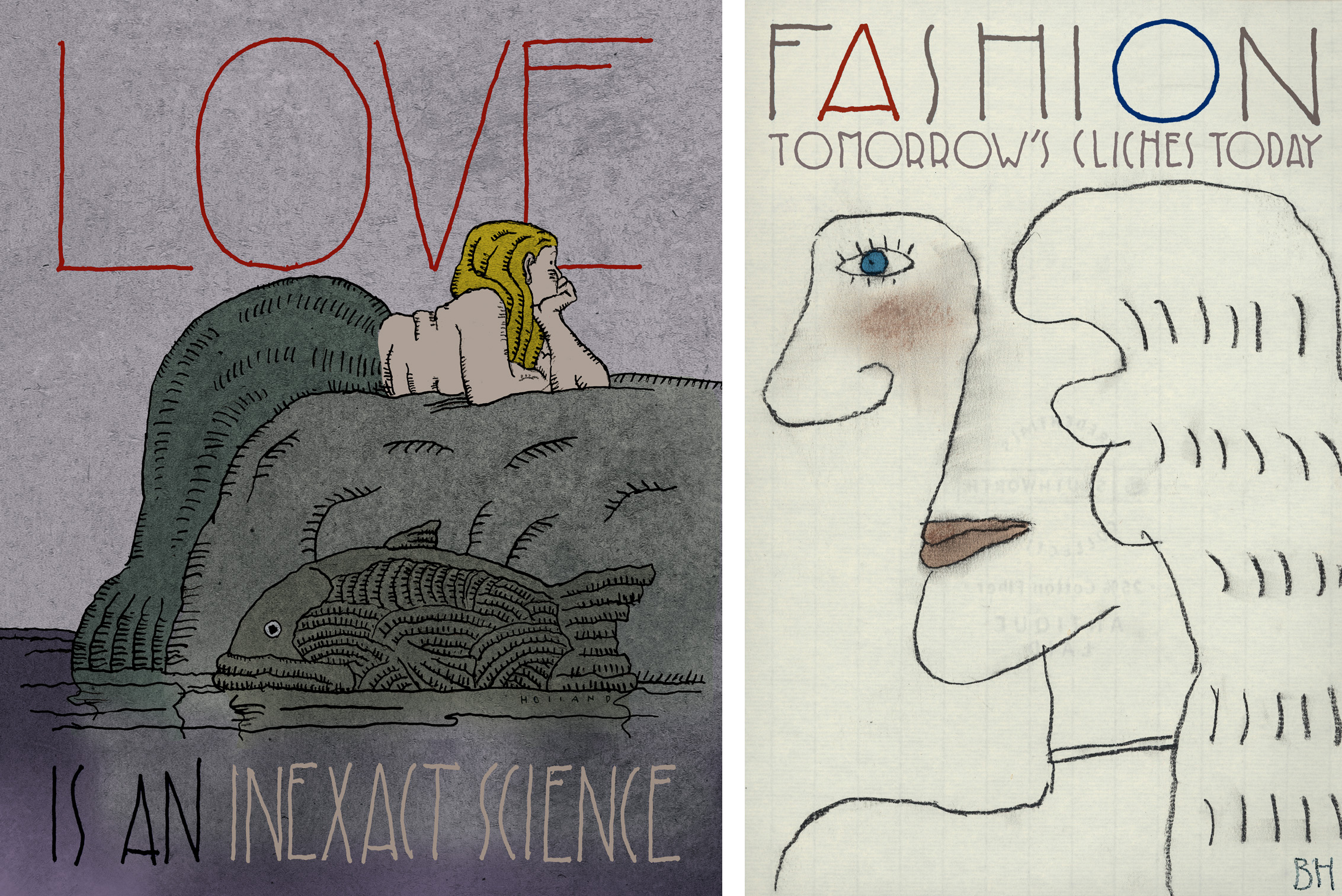 Q: Why not?
A: Lots of reasons. To begin with, I didn't want to just illustrate a lot of quotes from famous people. I wanted it to be more personal. I tried coming up with thoughts of my own, but they always sounded contrived. In the meantime, I showed my work to Playboy and Evergreen Review and a lot of other places and started getting work from all of them. And then you and I met and started work on your little magazine... 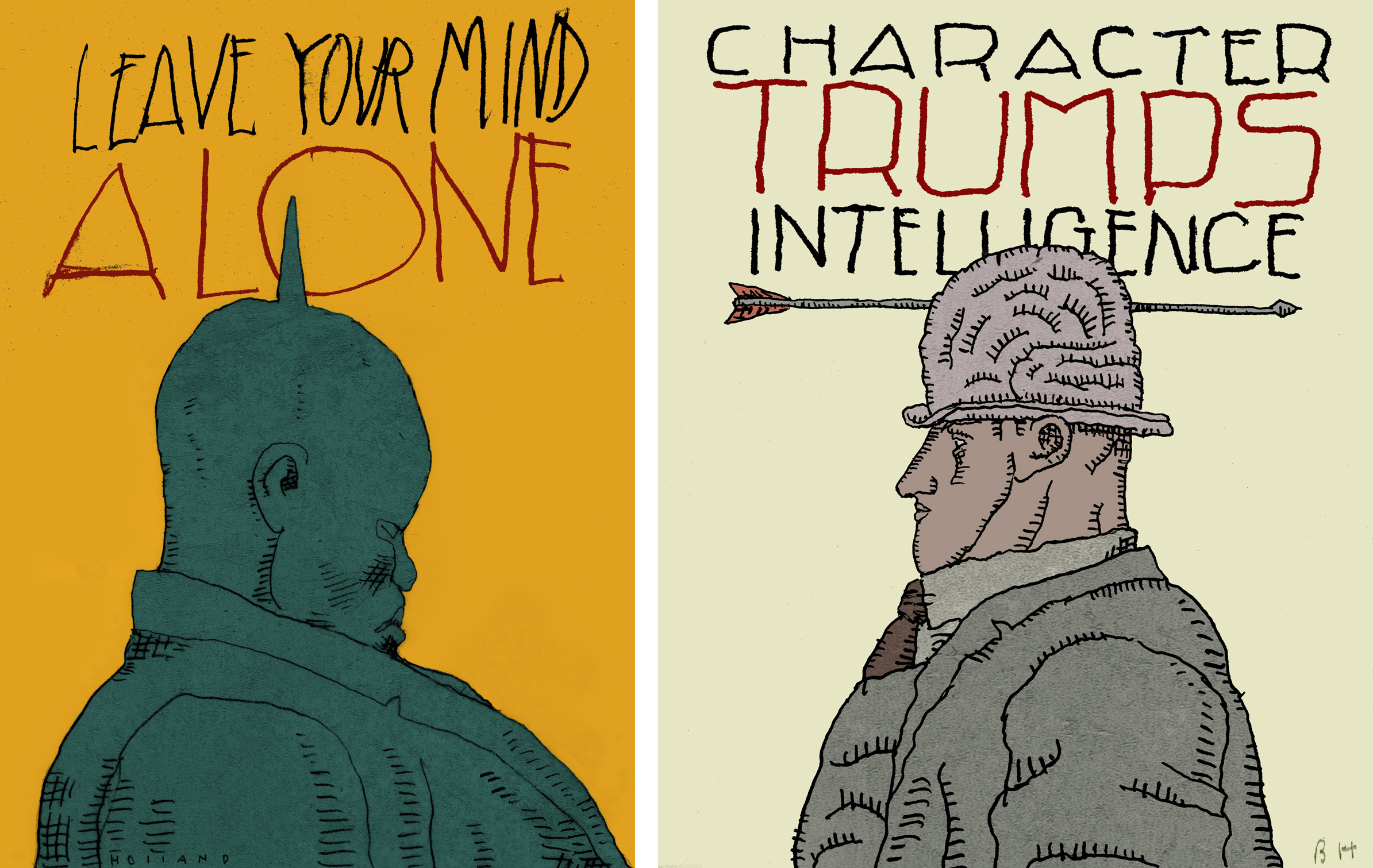 Q: Borrowed Time…
A: And after that, all the hippie publications we worked on together. So the idea of doing quotations for Avant Garde just disappeared into the mist. Then one day about ten years ago, I was looking for a quote from Albert Camus and found it on a website called BrainyQuote. Then when I started looking around to see what else they had, I found a page of quotes from myself. Suddenly the light bulb went off. I wanted to call up Lubalin and say "Guess what?  I've finally got quotes for the feature," but of course Herb was gone, Avant Garde was gone. But I wasn't, so I started fooling around with various combinations of words and pictures. 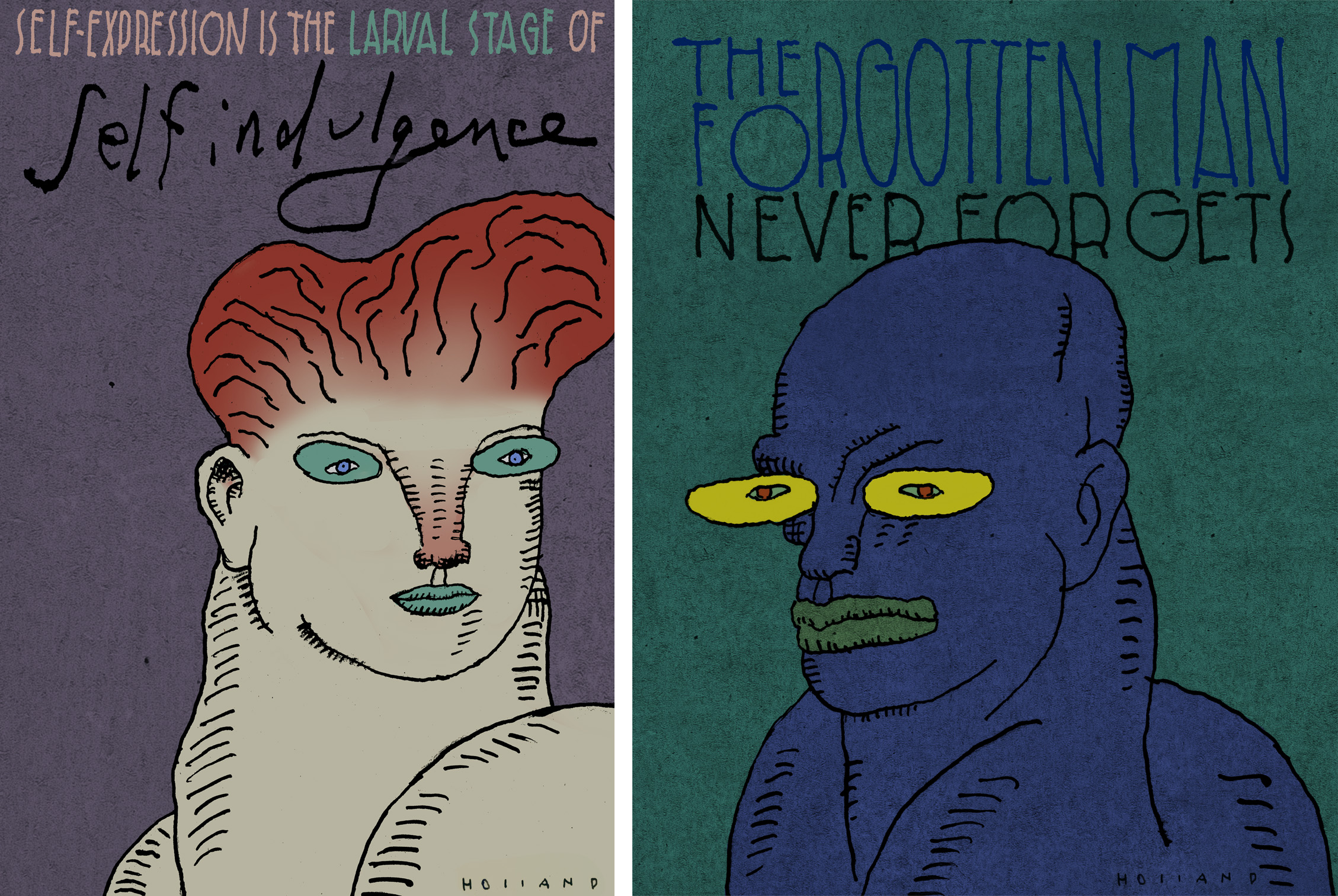 Q: What comes first? Word or image?
A: Well, most of the quotes come from articles I've written, so they're already there. And that gives them a natural feel, more like everyday speech, not the stilted things I was trying to come up with way-back-when. And as for the drawings, I'm not really trying to illustrate the thoughts. I just want the pictures to extend the thoughts. 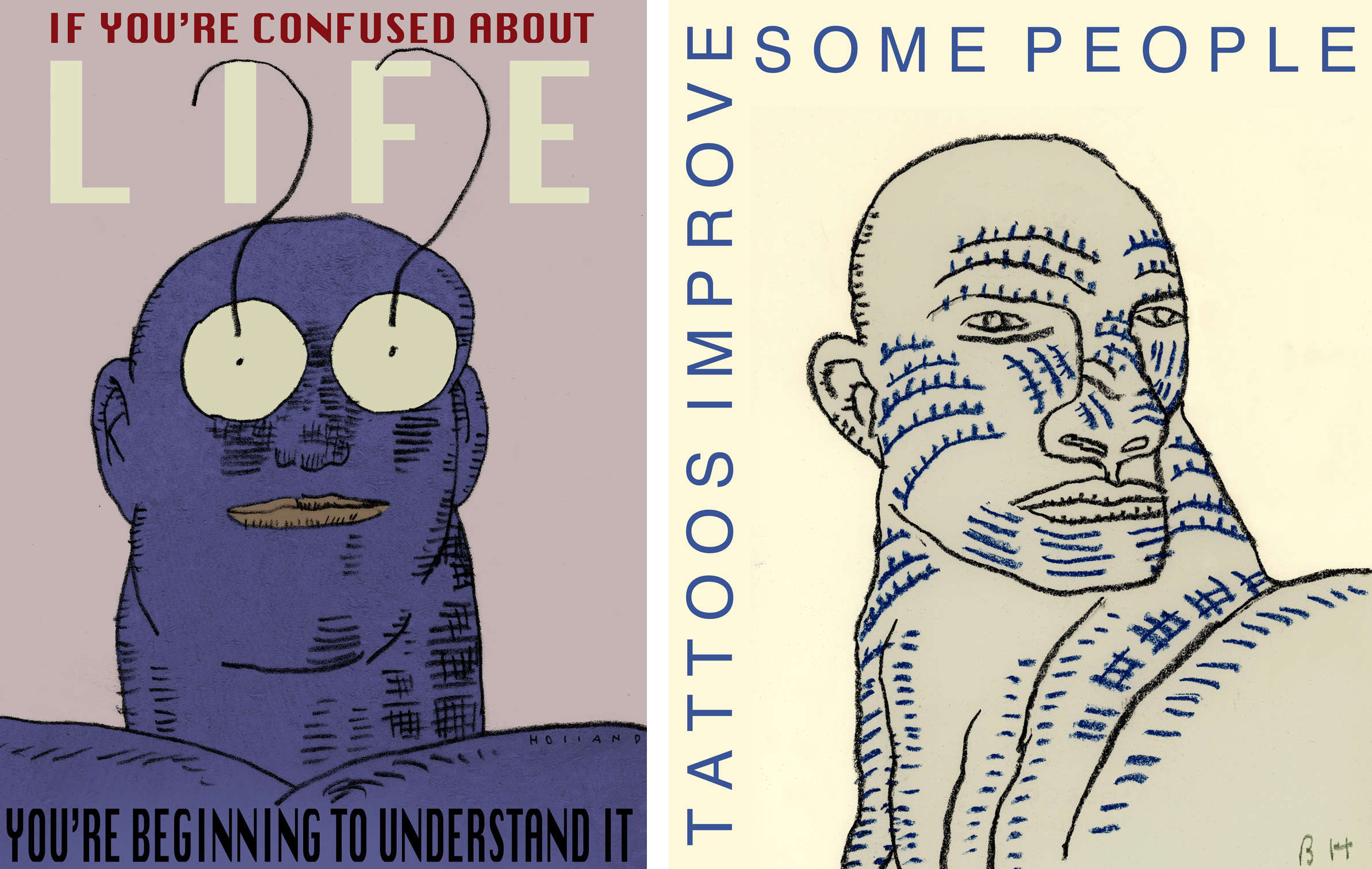 Q: Why do you use lettering and not type?
A: I have used type in a couple of cases. But in general I want these things – both words and pictures – to have a colloquial feel. Like the kinds of illustrated letters I've sent people over the years. 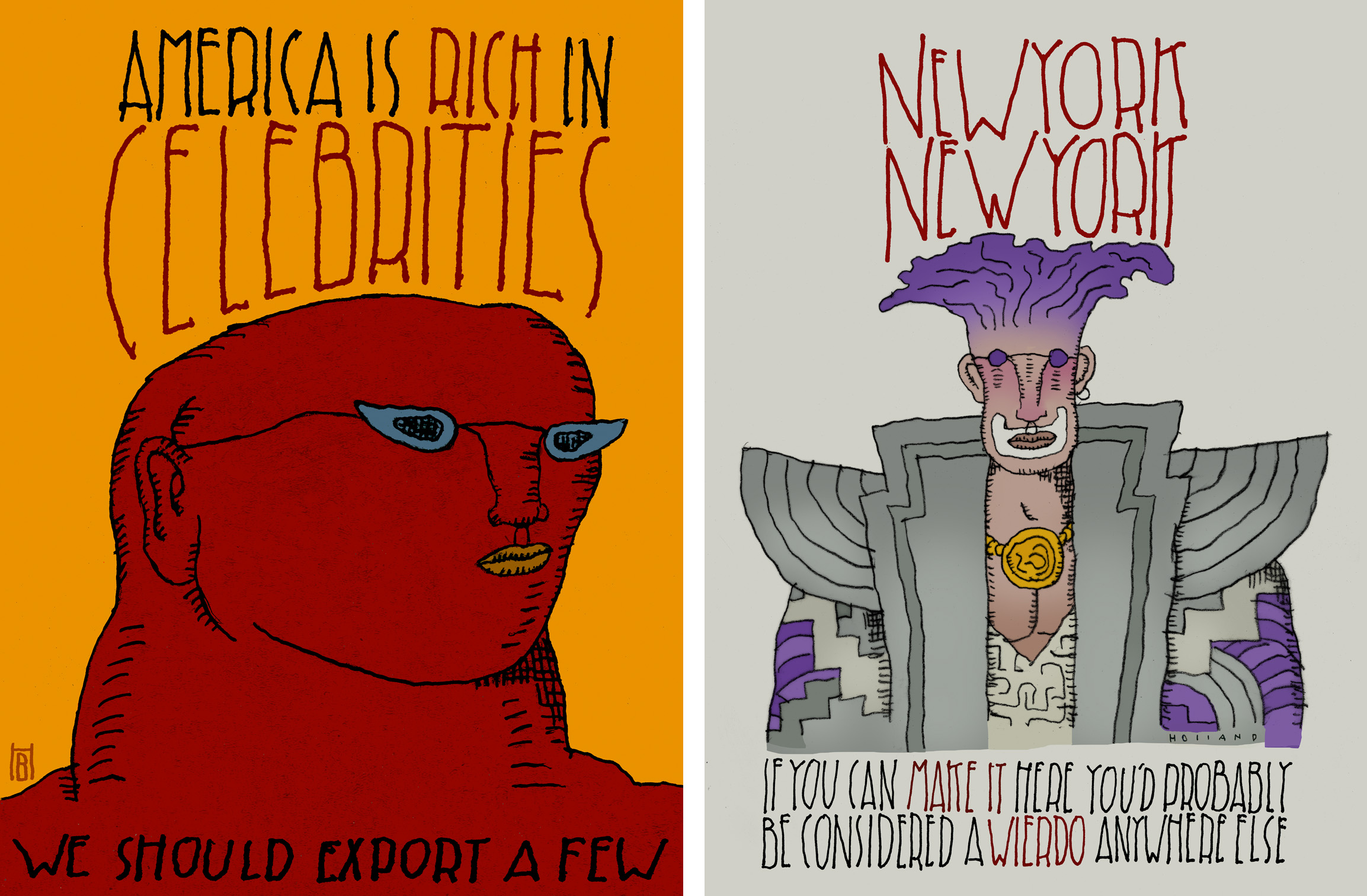 Q: What influenced your lettering style?
A: The basic letter forms I acquired in 4th grade when my father taught me to send and receive Morse Code. In the army they used a simplified script of capital letters, made with the fewest possible strokes; you know, a capital E made with two strokes instead of four, for speed; that kind of thing. Over the years, doing ordinary things like addressing letters and packages, that just turned into a personal lettering style for me. Where influence came in was where I had a lot of text to arrange around a drawing, and there I had three or four influences. 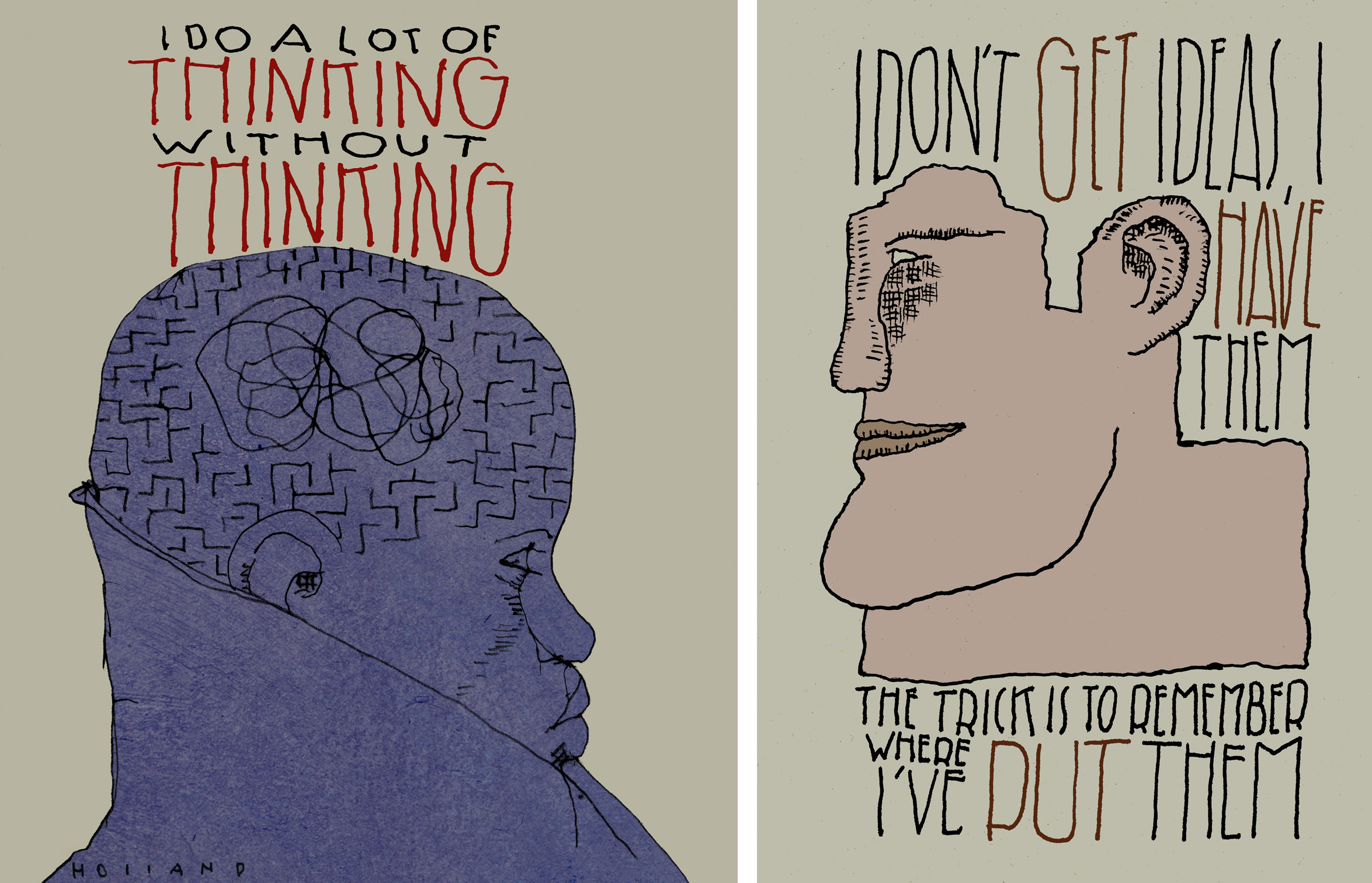 The first was Ben Shahn's use of folk lettering on his drawings and paintings. He adopted these letter forms from signs at barbershops and restaurants and adapted them to his drawing and painting style. The way he made the lettering and the art work together was very instructive, but his use of the style was so distinctive as to be proprietary and anybody who was "influenced" by his lettering ended up looking like an imitator. 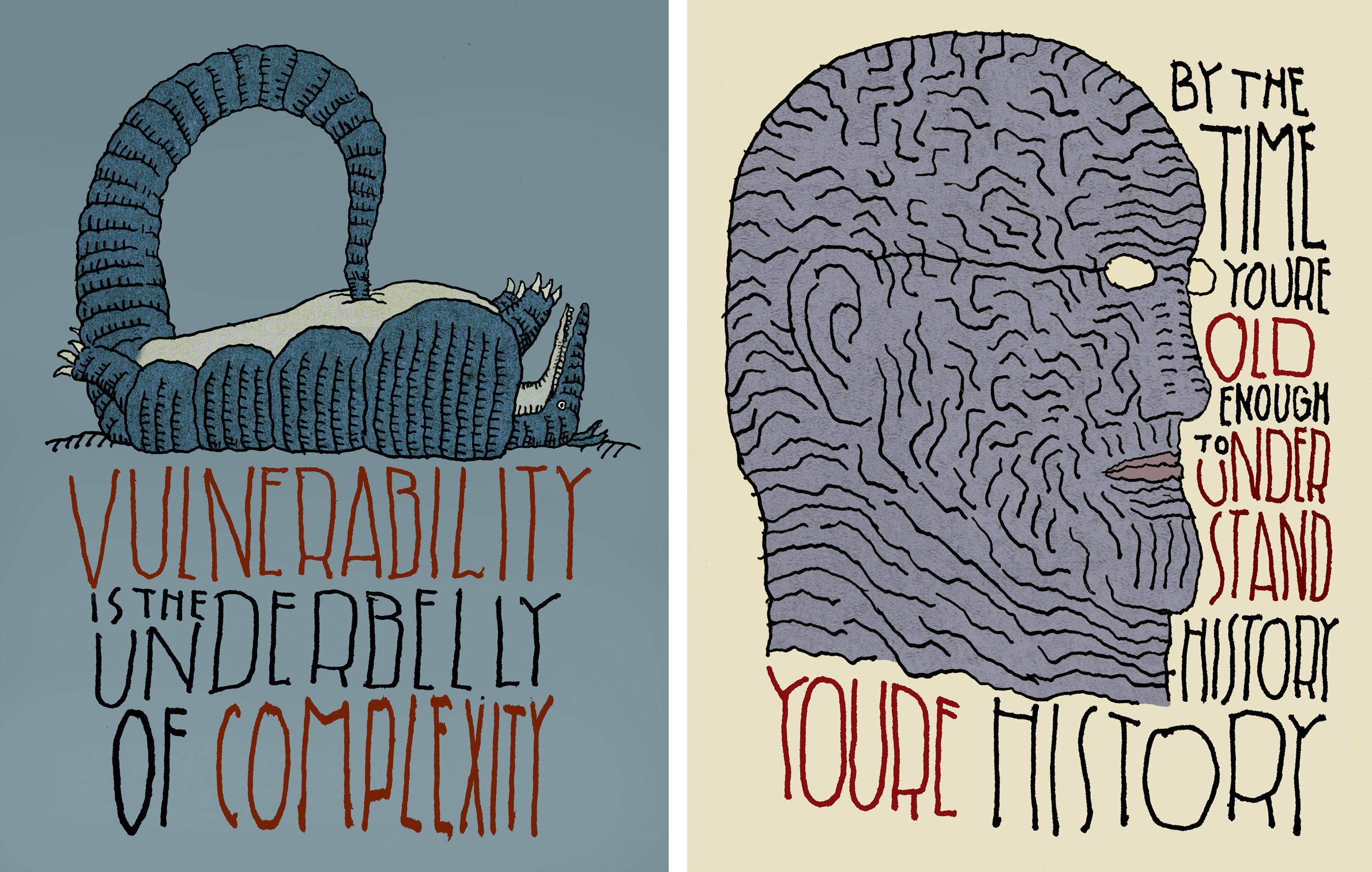 I used Shahn's lettering once on a drawing for my first portfolio, along with something I had written. That was the picture Lubalin saw that suggested the idea to him. I used Shahn's lettering style as if it were a ready-made alphabet. It worked for that drawing because the letters had a decorative quality and my drawings back then had decorative elements. But almost as soon as I got to New York I started trying to strip everything out of my pictures that was merely picturesque and I never used that lettering style again. 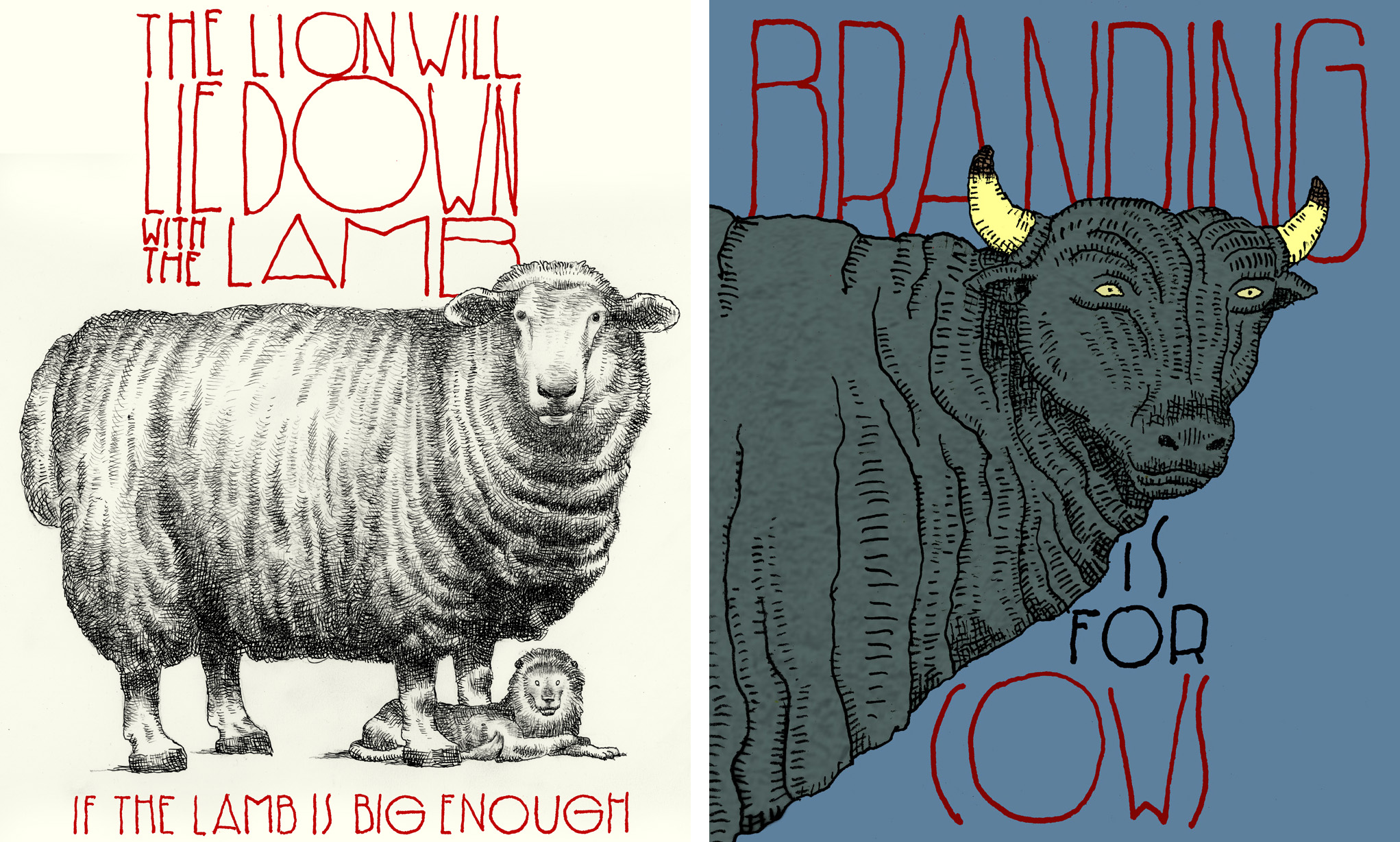 Another influence was Kenneth Patchen's illustrated poems: very eccentric and kind of goofy but very passionate. People tend to think of Patchen as a Beat poet, but he was there years before the Beats; he wrote his novel The Journal of Albion Moonlight during World War II.

And finally there was Pablo Whats-his Name, who did the credits for Dr. Strangelove… 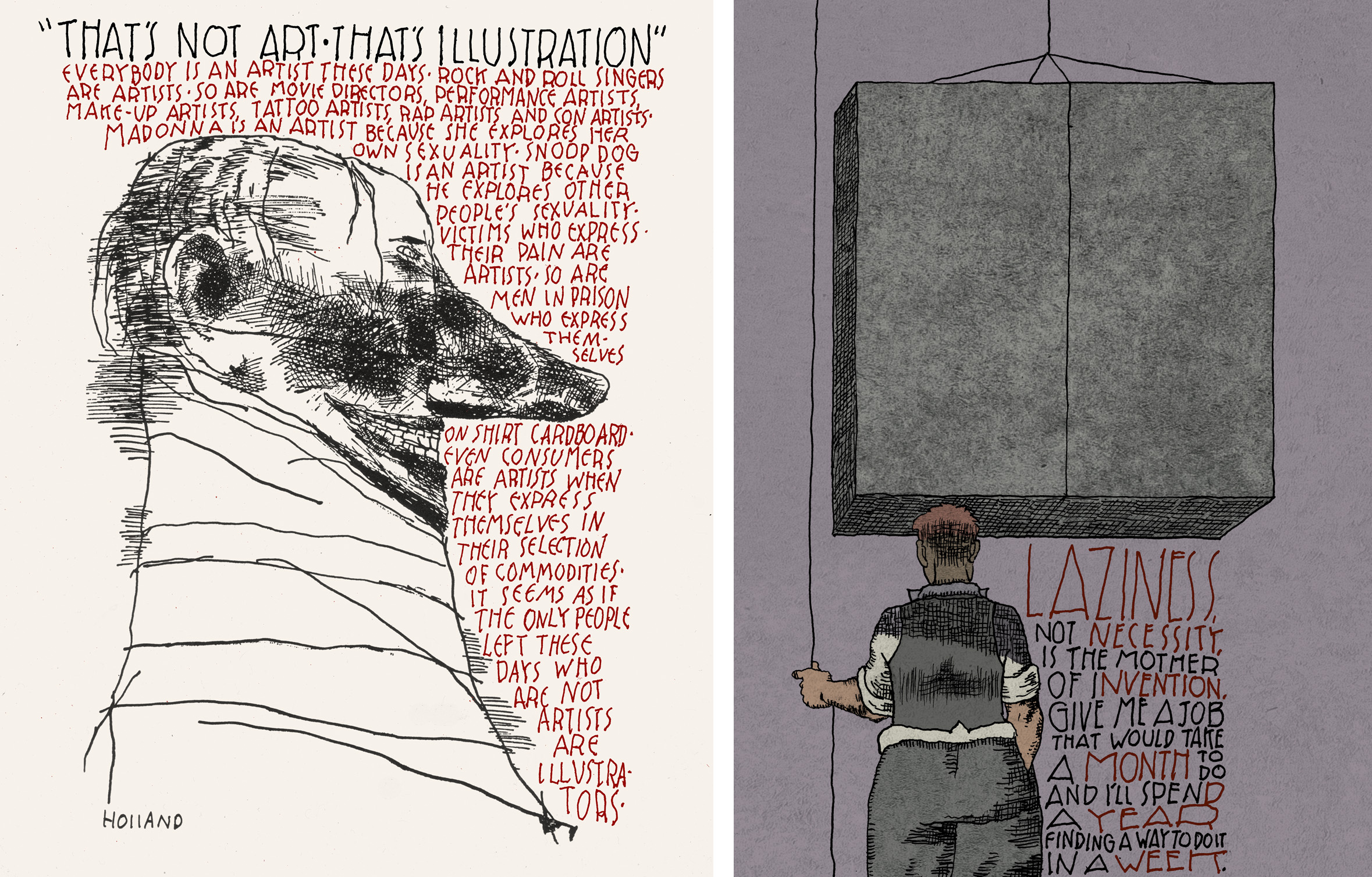 Q:  You mean Pablo Ferro.
A: Right. One of my favorite movies and I loved the credits: the way he arranged the letters to make the spacing of the lines work out. Those were all abstract influences. And then there were four people – at least four – whose influence was personal and direct. The first, of course, was Herb Lubalin: the way he used a Typositor to stretch letters and to harmonize the way they fit together within a block of type; I began emulating that back when I was doing book jackets. In those days we did the art, designed the jackets and did the type ourselves.

Then there are two clients: Erwin  Piplits in Vienna, who's commissioned me to do posters for his productions at the Odeon Theater for nearly 30 years; that was the first place where I began doing hand lettering for titles... 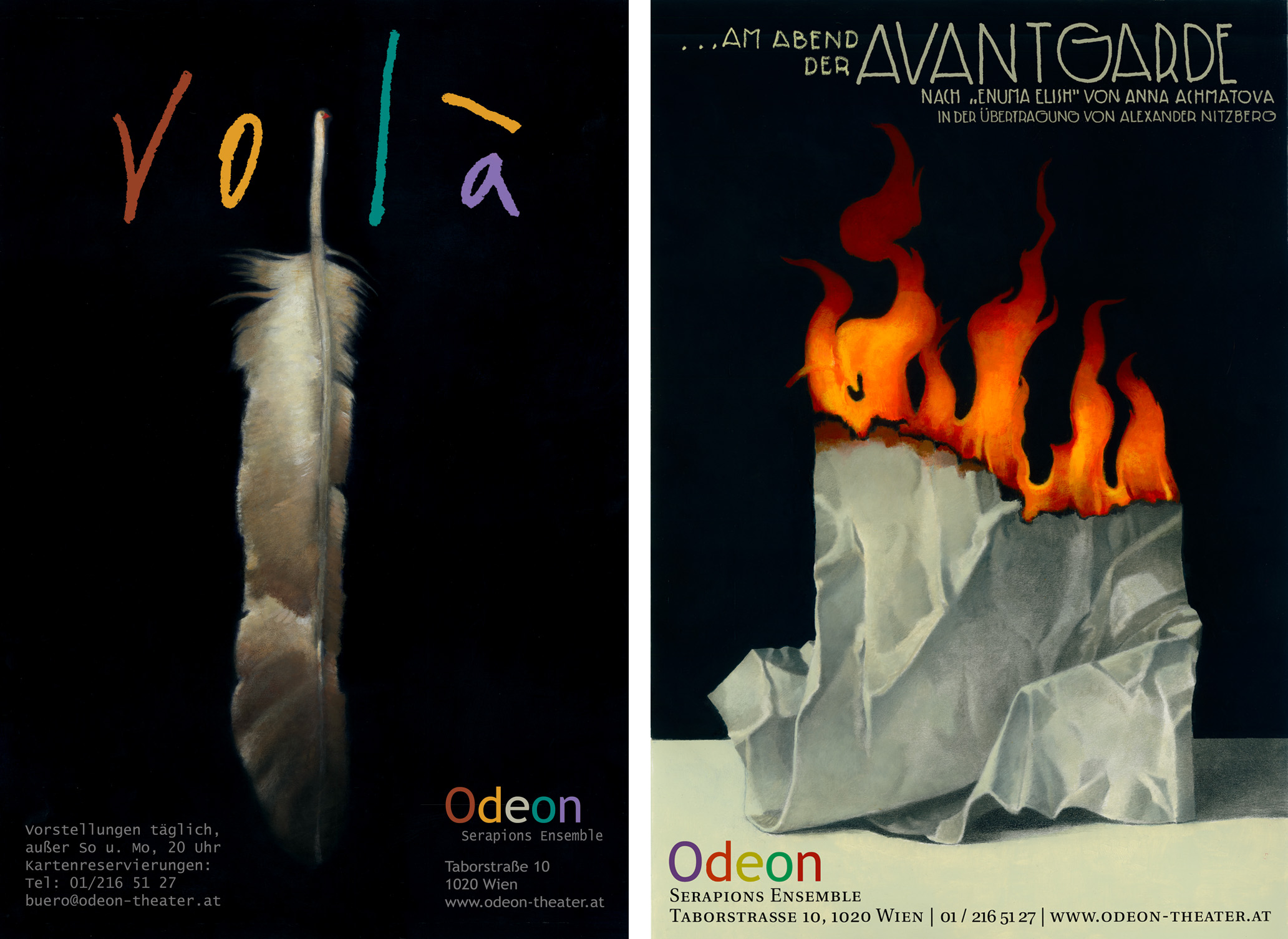 ...and Anthony Padilla, who's also hired me to do posters; he saw the things I was doing for myself and commissioned me to do some very text-heavy posters like the ones for Chester College. 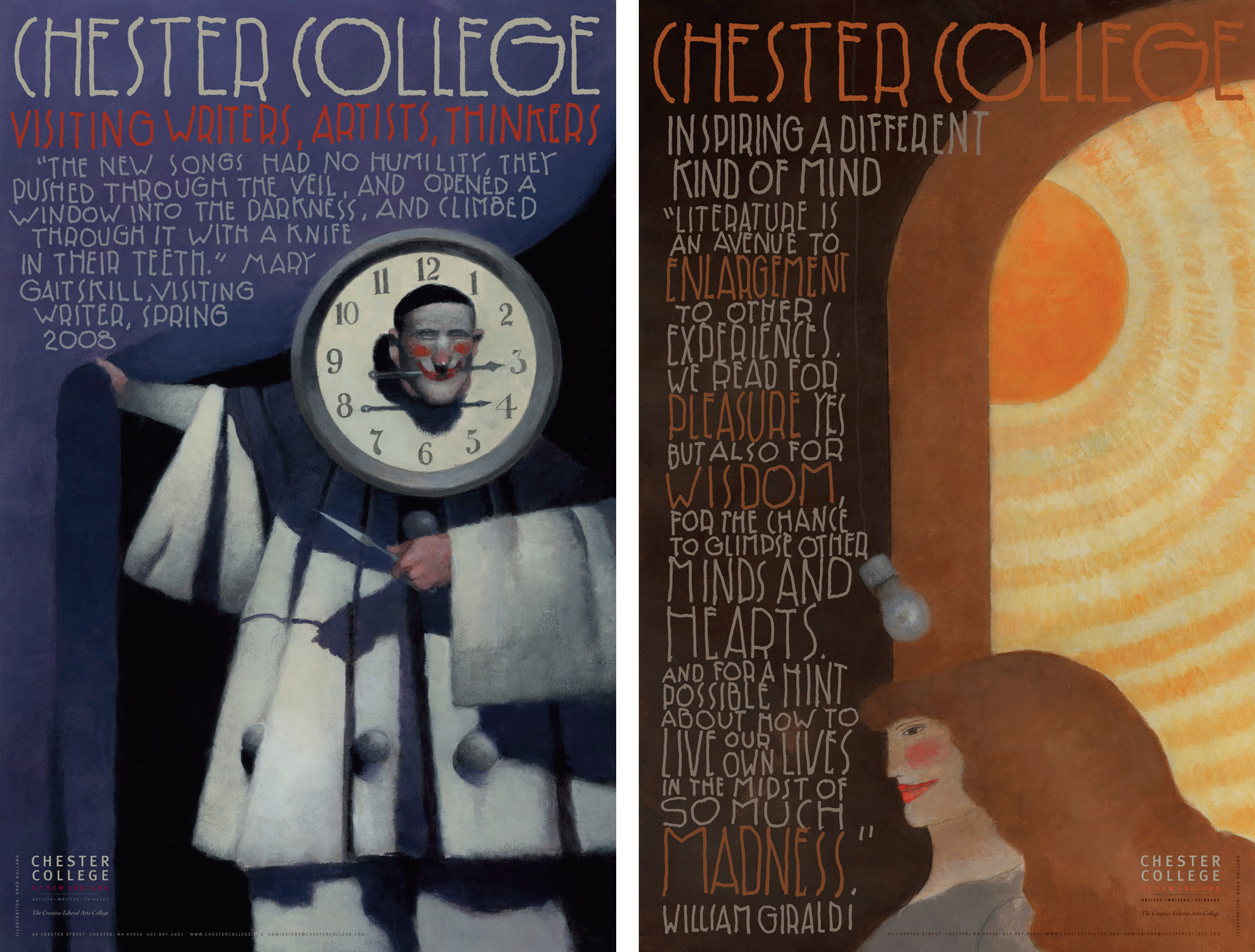 And my first big influence: my old friend, Jim Parkinson out in Oakland. We met in Kansas City when we were both working there. Jim had just bought a platen press and a big mess of Bookman type and we started to print a book in our spare time. He taught me to use a California job case and to set and lead type. He's gone on, of course, to become one of the best type designers in the business and does these beautiful oil paintings – I guess they're oil – of everyday scenes with signage. But back when I was 22, he spent an hour one evening giving me a basic primer in typography. I've always been able to do a lot with a little, and Jim's brief explanation of letter forms was enough that I've been able to build on it for my own purposes ever since. 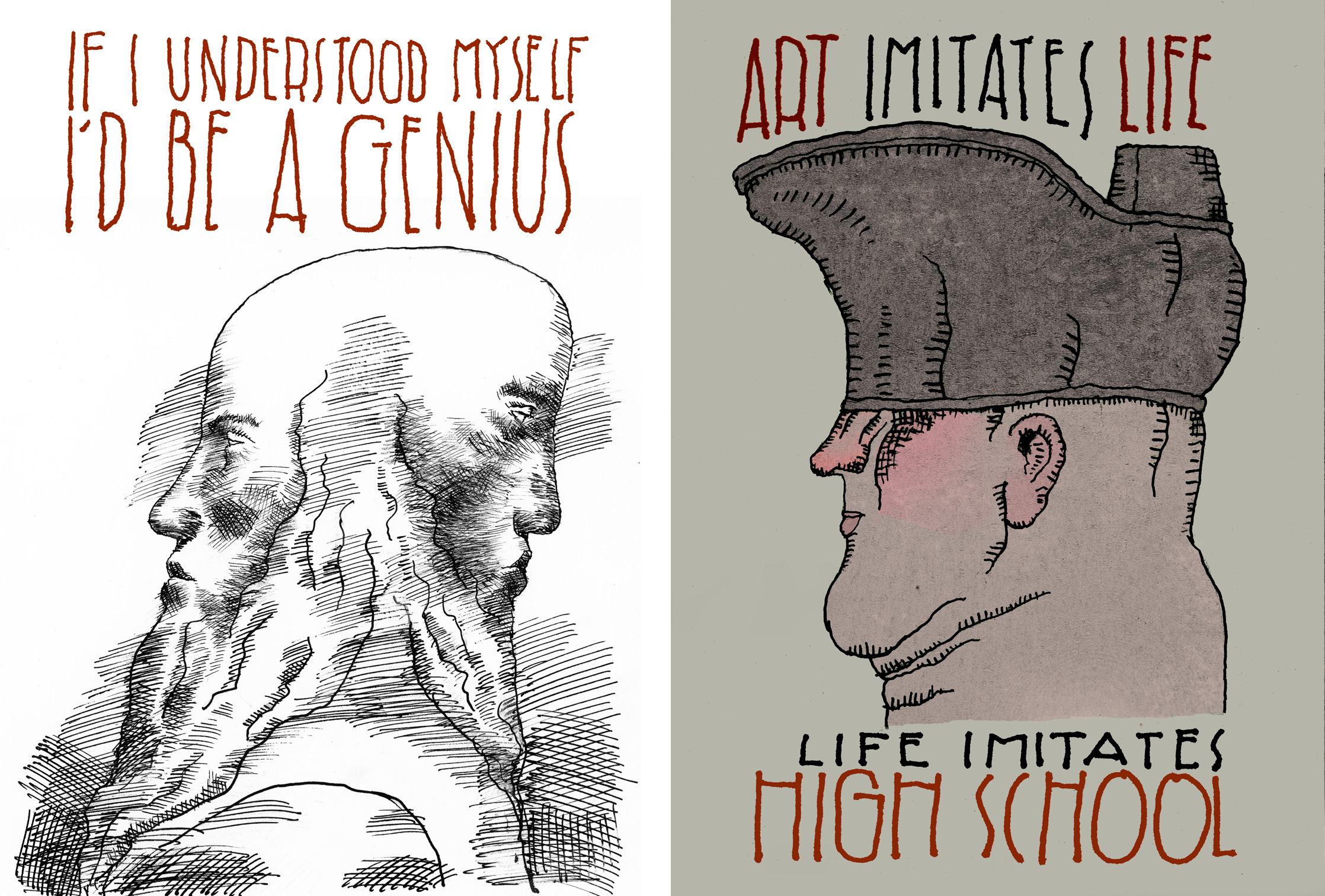