MARCH 9, 2010
The Society of Illustrators annual show of advertising and institutional category just opened last week here in New York (runs up to March 20).
I have two pieces in the show, both of which were album covers created for a British music magazine The Word. They have supplement CD filled with new music every month.

To have two of my favorite covers out of 33 covers I created monthly, was a good finale for the project. The project that started close to three years ago, recently ended with the magazine redesign as of February issue of this year.

This monthly gig came during their last redesign. Matthew Ball, a Scottish freelance art director and former Rolling Stone AD who I used to work with often, kindly pulled me into this project. What I thought would only last for a short period, ended up as accumulation of 33 images. I think I got some good pieces out of them which lead to some other jobs and projects. 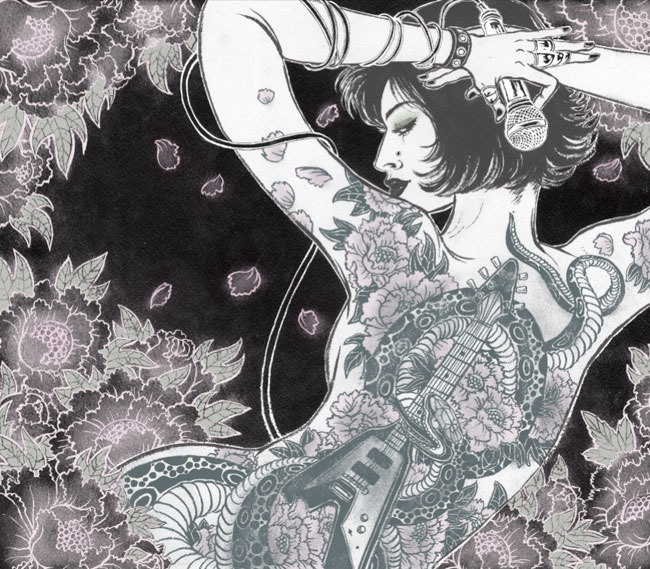 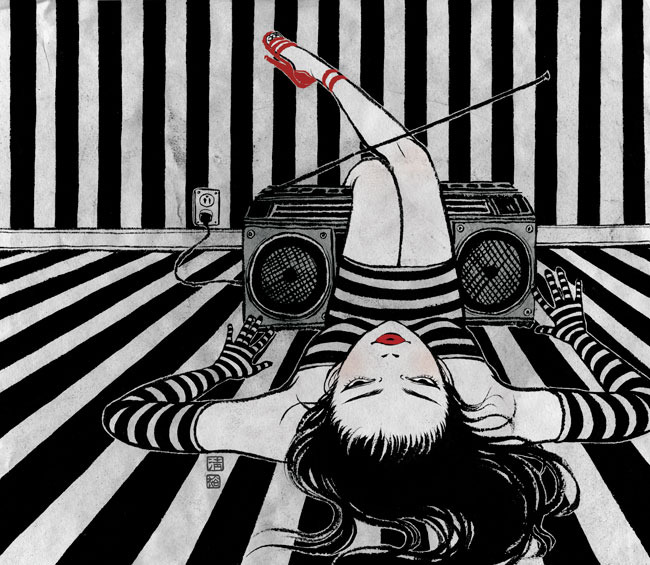 above are two images accepted into The Society of Illustrators advertising and institutional show. They were both created for The Word magazine supplement CD Now Hear This!
Readership of the magazine is mainly young men, so the only art direction they gave me was to have "sexy girl with music instruments". I had a lot of fun with this lighthearted project every month. I think I did pretty much every variation I think of in the theme within that 32 covers. Things do end when they need to end.  It was time for a change.
In this occasion, I decided to post some of the covers I was happy with. You can also see cover image archive here.

Big thank you to Matthew Ball, editor Mark Ellen, AD Jonathan Sellers, production editor Mike Johnson, and last but not least Jerry Parkins who made sure my payments don't get delayed every month.
The new The Word looks really good with illustrated covers by André Carrilho. Take a look when you are at (international) newsstands. 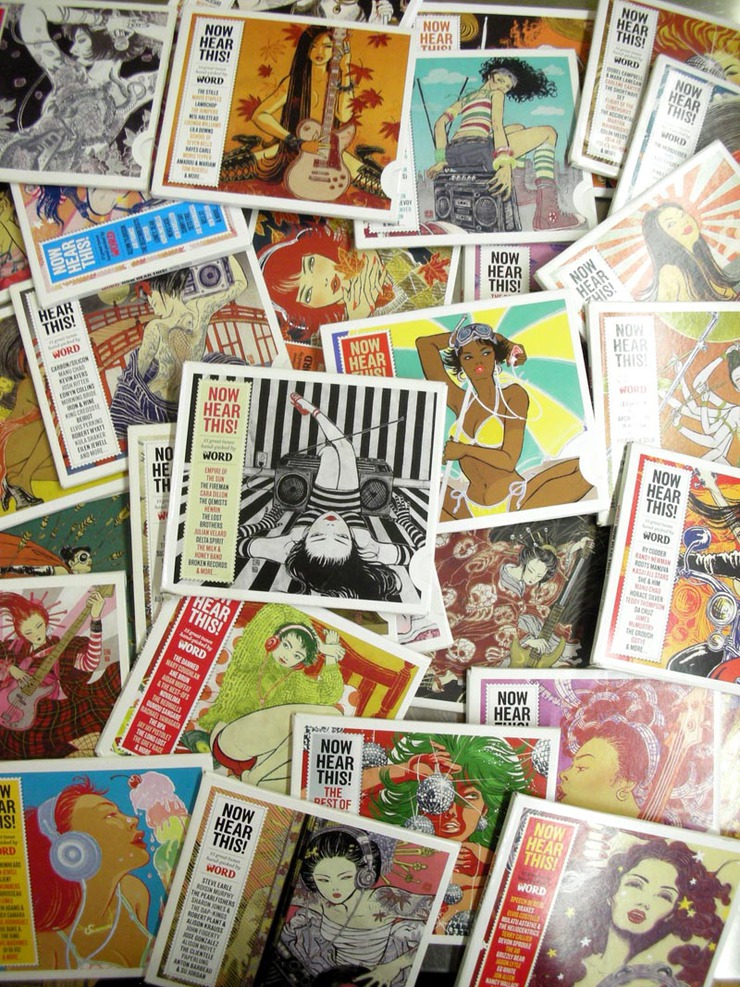 I decided to put all the past covers out and take a photo. Wow, I made so many in less than three years... 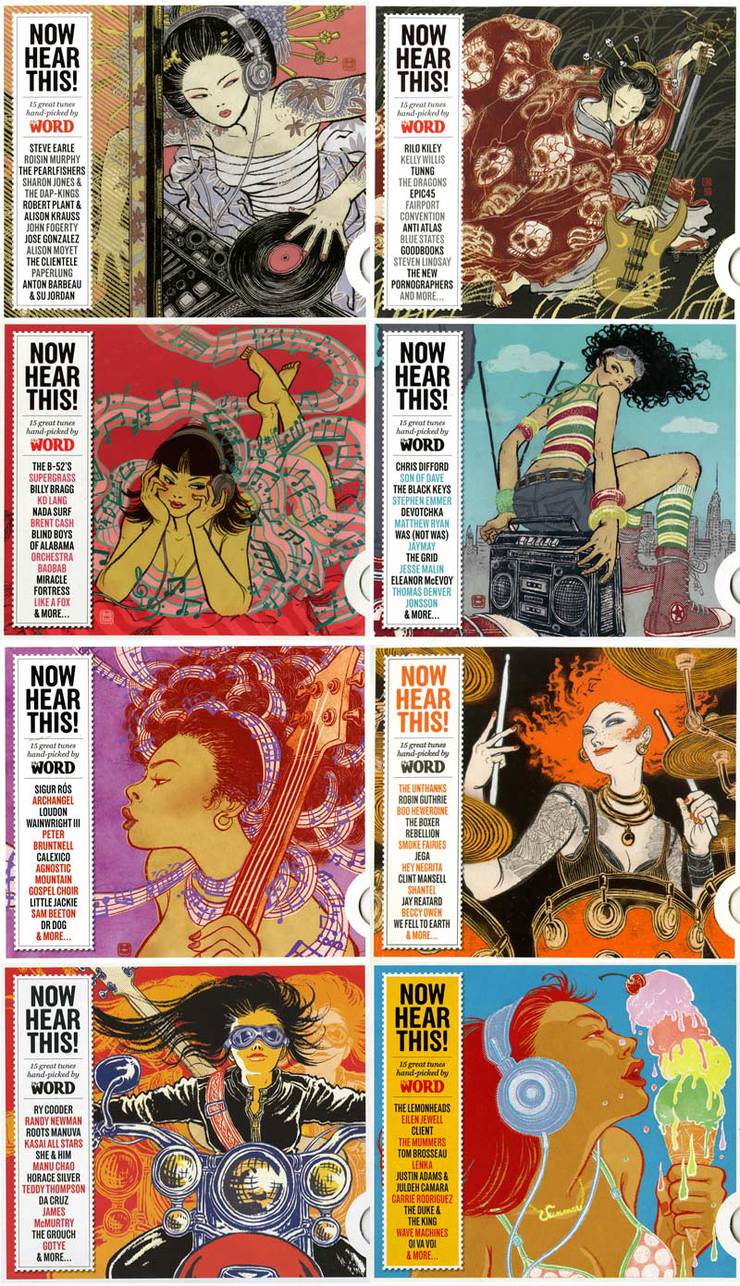 above are some of my favorite coverss. Many of them ended up reused in different projects later.

We were so used to working together, most of the month, our process got very simple: one sketch, one final. This, of course, does not happen often with other clients.
Topical: shows and events  illustration process
Latest
Whether you make it or not is never about talent. message to the aspiring artists art doesn't save people's lives (but it can do other things instead) Merry Christmas, Happy Holidays. 26 illustrators for Zatoichi box set life after art school, now what? conversation on JUXTAPOZ attack of the 80 foot octopus (mural) Why I think day job is good for you. (for aspiring artists out there) location drawing (virtually) on Google Map 15 influences, that stick with you, FOREVER. free event at Apple Store NY
Topics
Topics
advice for young artists art for good cause! awards and recognitions business practice and ethics DC Comics Vertigo illustration process inspirations interviews products random thoughts shows and events sketchbook special projects teaching etc. travels
Archive
© 2023 Yuko Shimizu