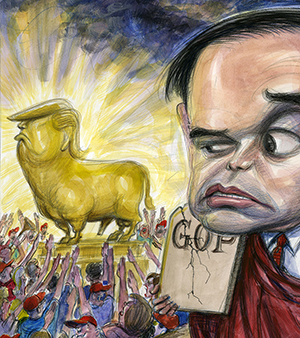 All illustrators steal (relax- it’s not a pejorative term as used here), and good illustrators steal from the best sources. I’m not saying I’m a good illustrator but I do like to steal from the best sources, those iconic images created by great artists and illustrators- mostly of the past, a few from the present- especially when serving the purpose of satire. You can tweak them, play, and spoof them to make a point. Most people- well, most till recent times it seems- recognize the image and consequently can make the connection, understand the reference and whatever punchline you’ve applied to the image. Michelangelo’s “Creation of Adam”, Botticelli’s “Birth of Venus”, Leonardo’s “Last Supper”, Rembrandt’s “Aristotle Contemplating the Head of Plato”, Daumier’s Don Quixote, Rodin’s “The Thinker”, Thomas Nast’s innumerable editorial cartoons, J.M. Flagg’s Uncle Sam ‘I Want You’. Ed Sorel is a master of brilliant take offs of vintage movie posters to hammer home funny and satirical observations and opinions.

I’ve had great fun in my career playing with images from the archives of Norman Rockwell, finding his Stephen Spielberg-ish vision of America rich material to upend, respectfully, with some bite. Gustave Dore influenced me even before I was aware of him specifically, as many a weekend I went to the library in my little blue collar town of Roselle to look through David Levine’s caricatures for The New York Review of Books. Levine’s drawings were steeped in the tradition of Dore, Grandville, and that period of satirical art.

This is a long way round intro getting to the illustration for the current ROLLING STONE, “Marco Rubio- What Went Wrong?”.  Art director Mark Maltais emailed me with little copy but a general theme addressing Rubio’s collapse as a great GOP hope and antidote to Trump’s ascendancy in the Republican primaries. Normally I can wait for more copy to come in before getting started but I was heading out to Wyoming for a week of receptions and presentations at the Brinton Museum the day after deadline, and felt that some proactive sketching of ideas would assist my mission not to be working up to the 12th hour before heading to the airport. Well, it didn’t work out quite as hoped for; there were many rethinks and adjustments as more copy from the writer, Janet Reitman, started drifting in. He was less a GOP Don Quixote and more a Moses carrying the establishment tablets down from the mountain rejected by the folks below worshiping their golden calf. I drew Marco so many times had there been time I might have tried doing the finish with my eyes closed. Thankfully, in retrospect, that option was out of the question and, as he seems to be political toast- an empty suit containing little substance but a tired sales pitch story- may never be put to the test. Frequent redraws can sometimes create a visual exhaustion with the subject. In this circumstance that was not the case; the caricature just had more time to marinate and get better (IMHO). The approved sketch, based on a classic Dore engraving from his illustrations for the Bible, of Moses coming down the mountain, was a very satisfying solution. I’ve always loved the illustration and have spoofed it many times- it can address any number of topics because it is such a solid image with gravity that can be satirized to whatever degree necessary. This was probably the first time, however, that I portrayed the Moses character delivering an unwanted message. 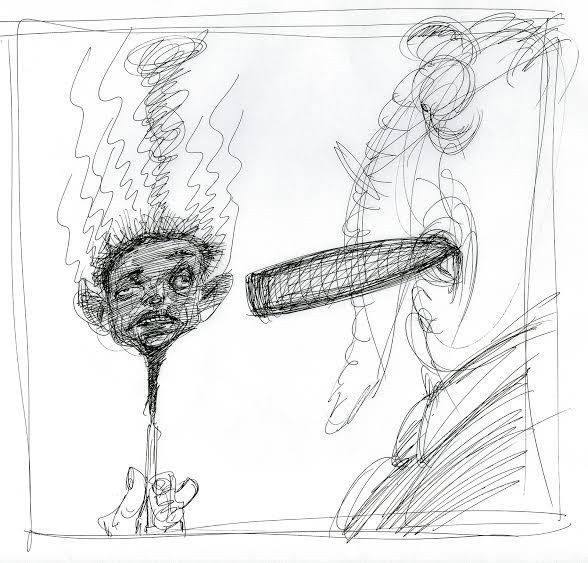 It seemed at first, without the copy, that I could approach Marco as a match that burned out before the GOP elite could light up. 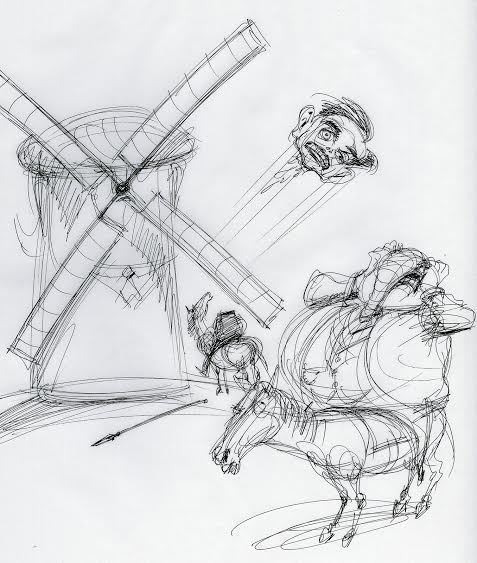 Or maybe a Don Quixote getting his head lopped off by a Trump windmill. 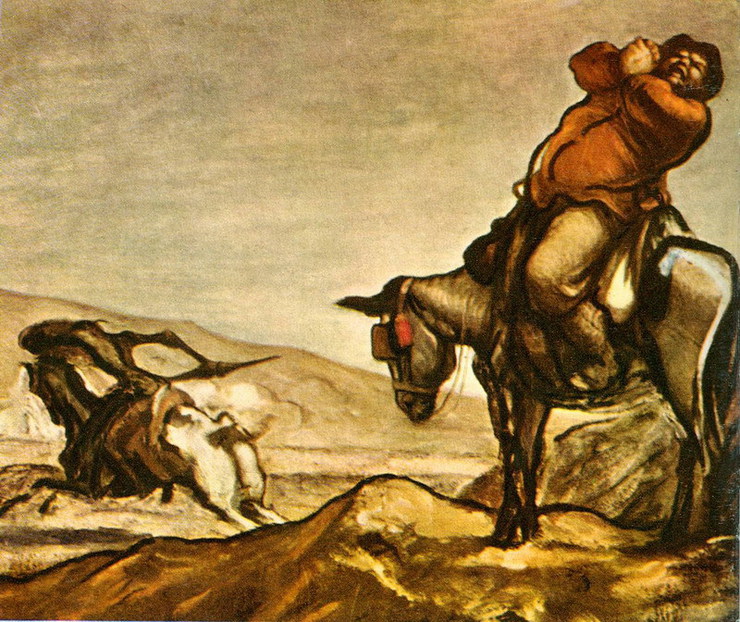 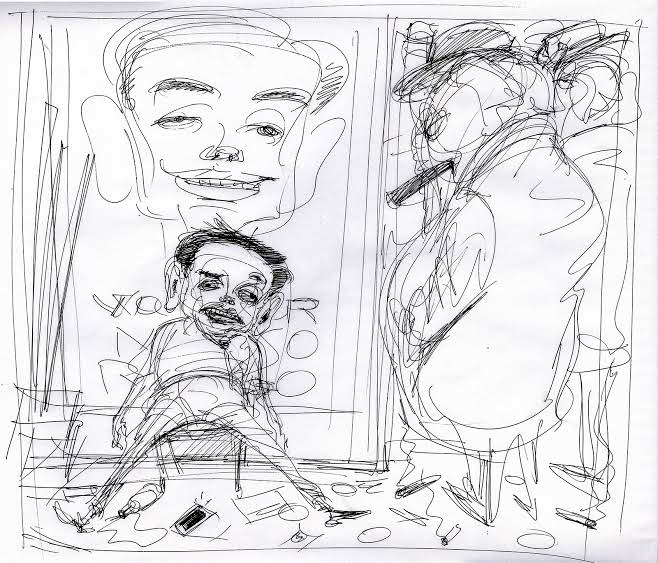 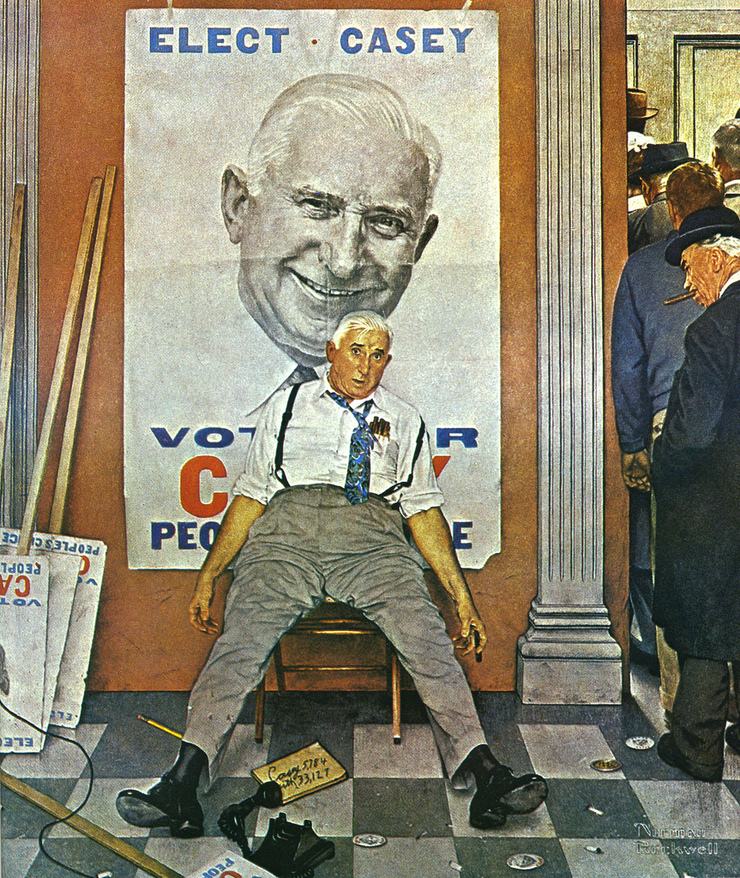 Thank you, Norman Rockwell, for a great comedic image. 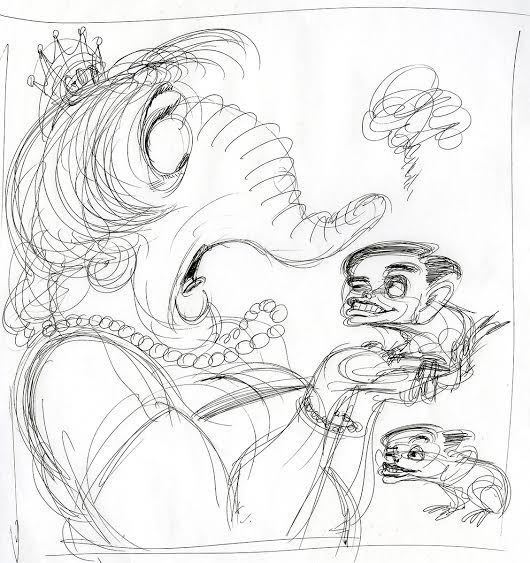 Maybe Marco was the frog that didn't turn into the prince. I scribbled him a second time in the sketch as he looked too much like a creepy dog in the palms of the GOP princess instead of the amphibian of fairy tales. 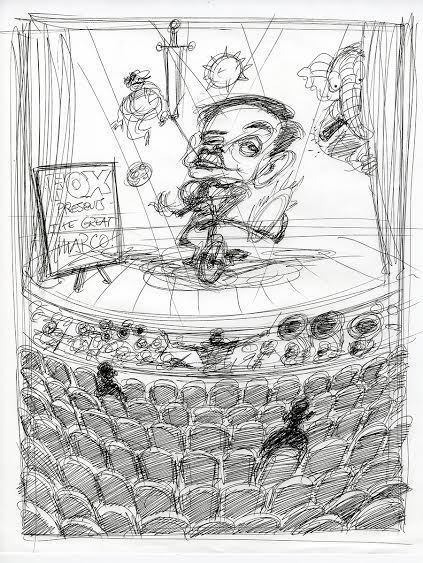 Marco as the FOX promoted main attraction. Unfortunately, there's no one in the audience. Another one I thought would make a good image. Ummm, nope. 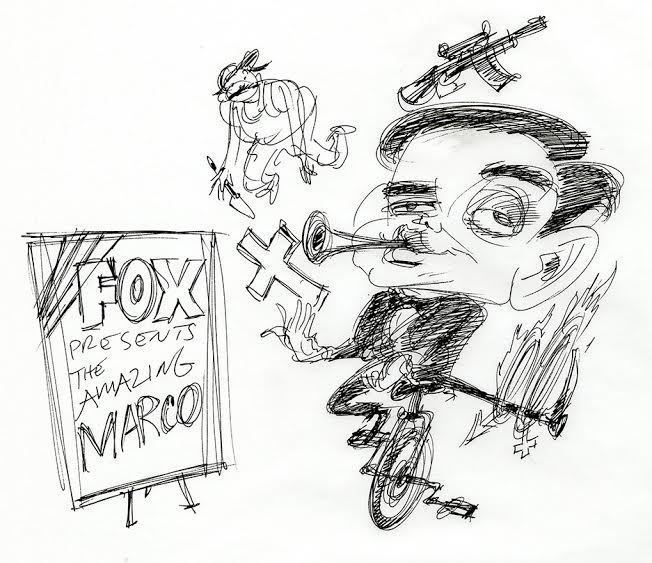 Another sketch to clarify what I hoped to put around the juggling. 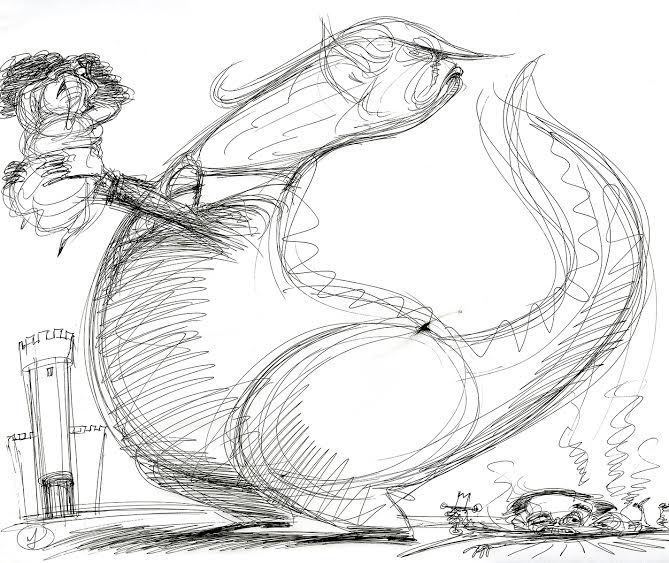 While we're exploring fairy tales, it was suggested why not try the knight who doesn't quite succeed in his rescue. I thought this was funny and imagined a Warner Brothers style tail pounding as I scribbled. But once seen and with more details of the story we were heading to more religious metaphors. 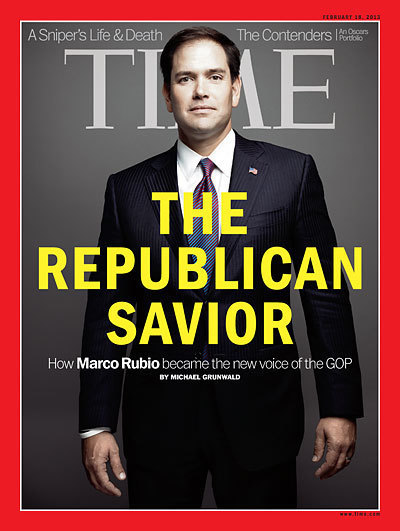 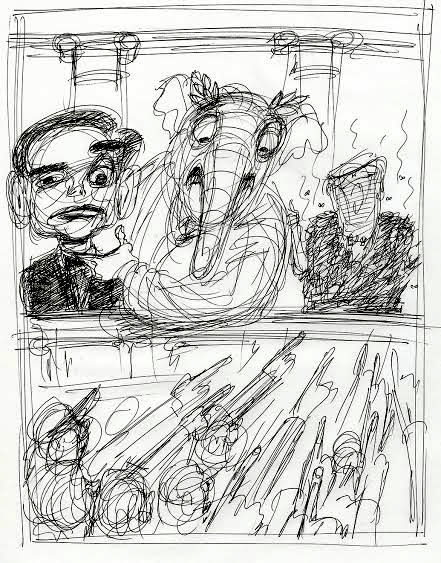 Saviors- in this case a Republican establishment Pilate looking to present the savior to the crowd, but they'd be asking for Bar-Trumpus. 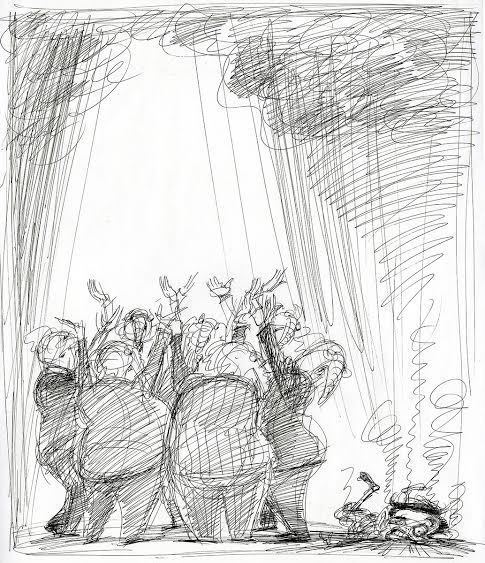 Or the elite looking to Heaven for the savior to appear. Looney Tunes solution- drop the Marco a la Wiley Coyote. 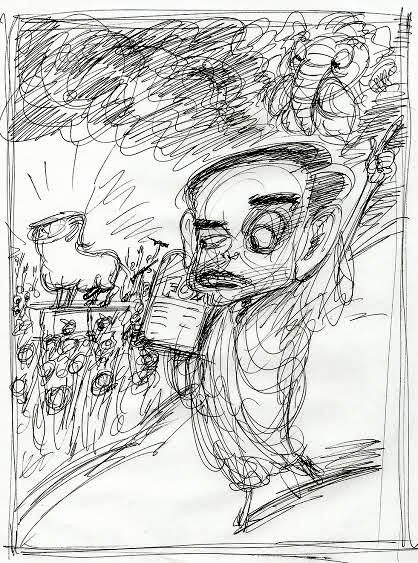 Finally. Marco as Moses carrying the message. The crowd below has found their golden calf, thank you, now get lost. 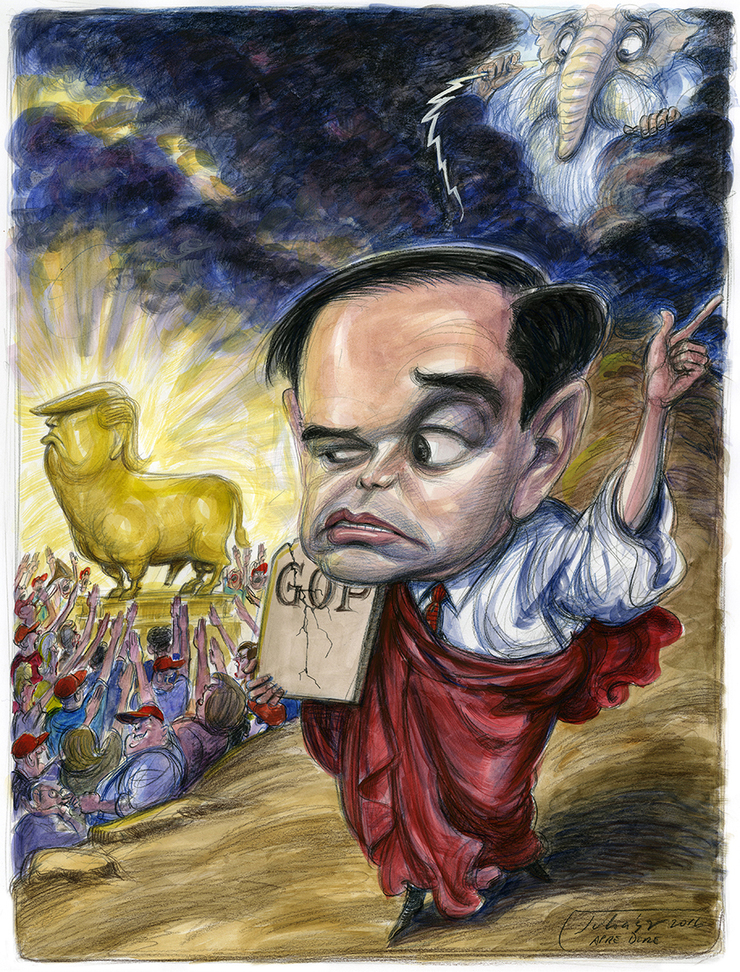 The finish. I added the limp lightning bolt in the hand of god as a nice touch. 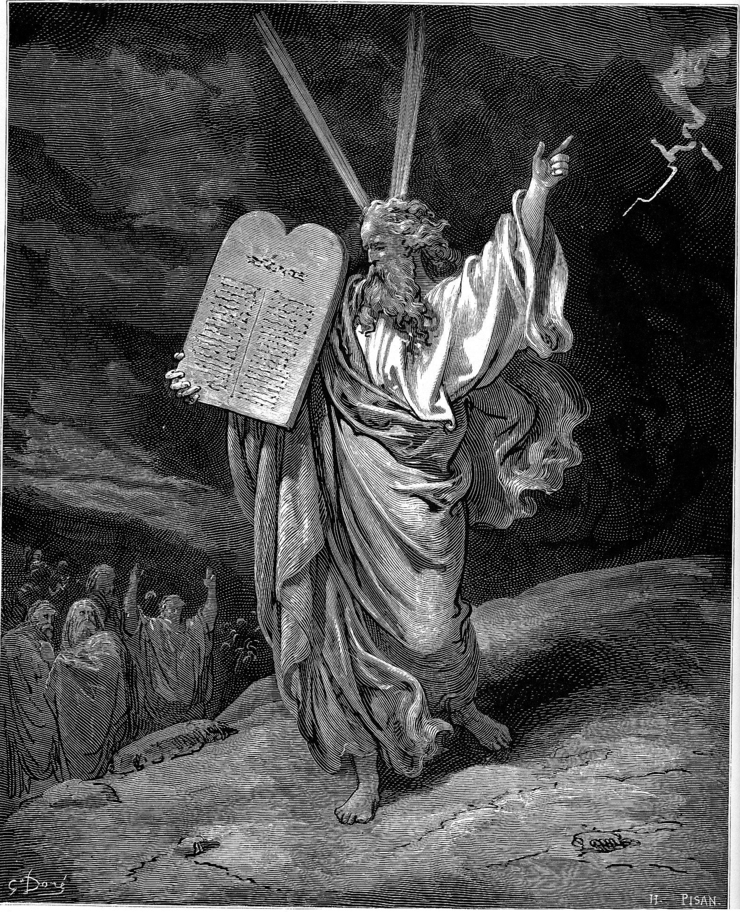 Thank you, Gustave Dore.
Latest
The Girl Who Would Be Free by Ryan Holiday THE BOY WHO WOULD BE KING by Ryan Holiday In the Company of Marines continues Invested in Portraits Three for John Bolton The Bigly Rolling Stone Cover The Prodigal Son Returns- In the Company of Marines- Part 1 The Prodigal Son Returns- Part 2- On the Bataan with the 24MEU Keeping Busy- Part 9 Good News and Bad News Goin' Down, Moses- Keeping Busy Part 8
Topics
Topics
AT YOUR STANDS NOW
Archive
© 2022 Victor Juhasz