USAF Art Program at the Society of Illustrators 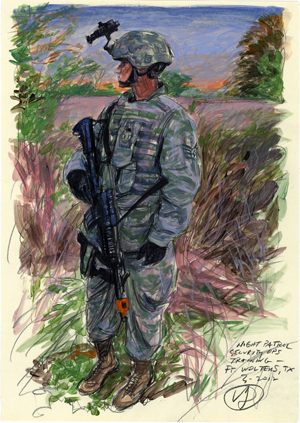 The USAF Art Program which has in its permanent collection, many from members of the Society of Illustrators, somewhere in the neighborhood of 10,000 pieces of art, has suffered from the belt tightening of the past couple years.  With limited resources artists from the Society and other organizations have been sent to continue the work of documenting the activities of the USAF, which are many.  My strong suit is people; I am not the brilliant painter of jets and planes like any number of its contributors.  Consequently my assingments have been t document the training of the boots on the ground.  Special ops, Combat Control units, the PJs (pararescue jumpers), urban and security force exercises.  I had the opportunity earlier this year to spend a fistful of days at Fort Wolters, TX, drawing and taking pictures of troops conducting security operations exercises.  These are the pieces I am submitting to the exhibition at the Society of Illustrators which will be open to the public in September.  Please stop by and take a look at some really great artwork.

One of two large scale paintings. This one on 24"x48" panel. Late afternoon patrol. The soldiers above are keeping their eyes focused further down the road at the people in the mock village. The trainers made sure nothing ever got too comfortable or, worse, predictable. Because nothing in reality is predictable. 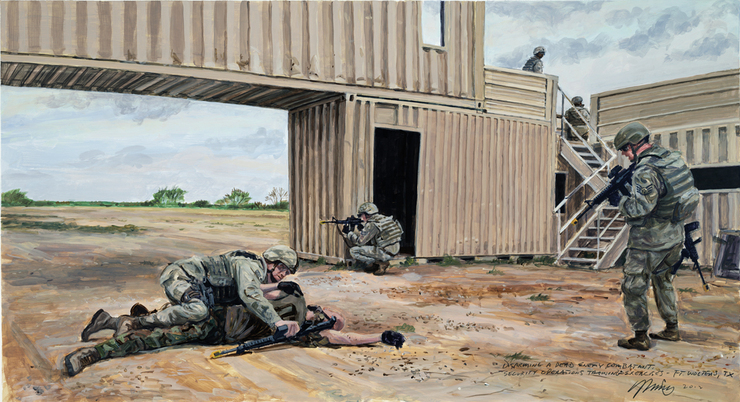 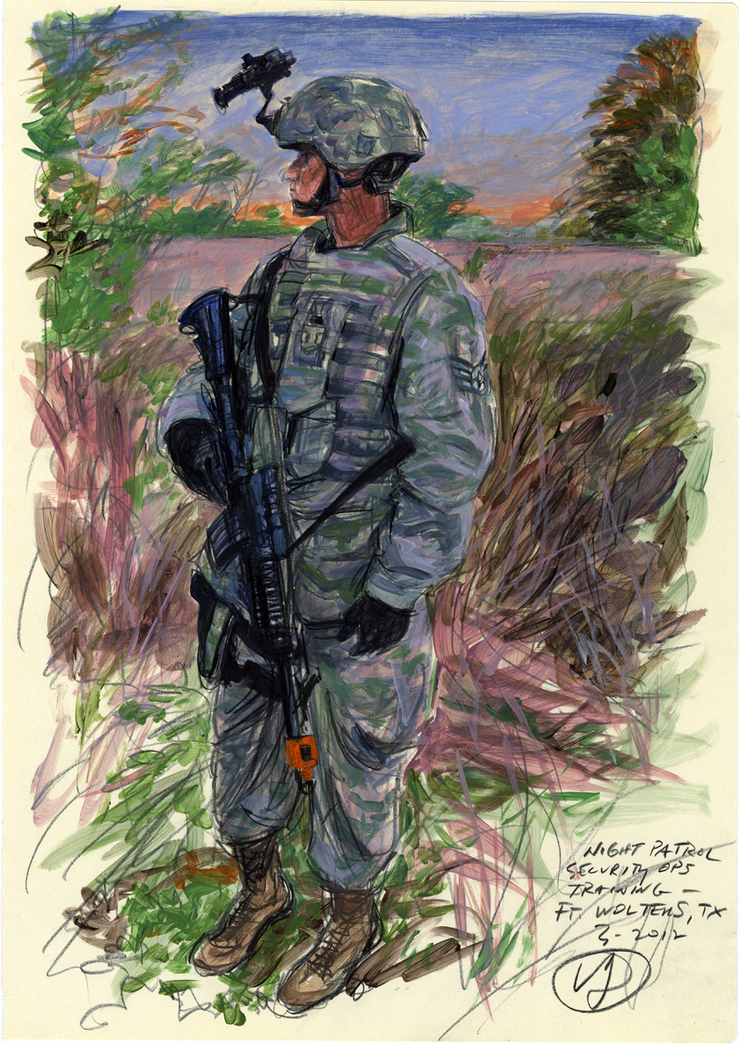 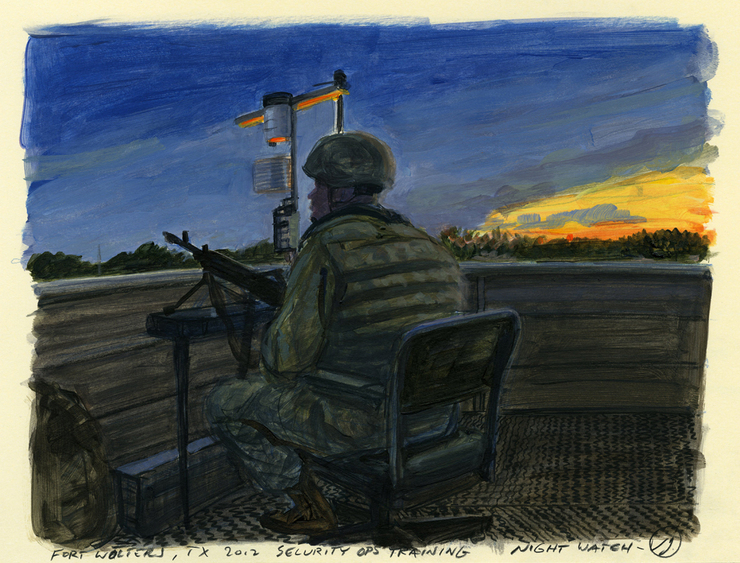 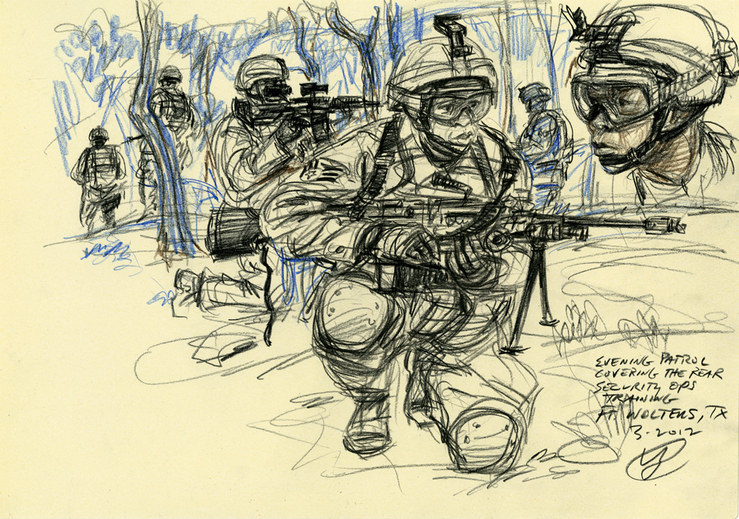 Went on a night patrol that soon became real dark, too dark to draw. I did what I could, relied on the photos to back me up. This soldier was very focused as she covered the rear during the patrol. It was difficult not to be caught up in her attention to her role. 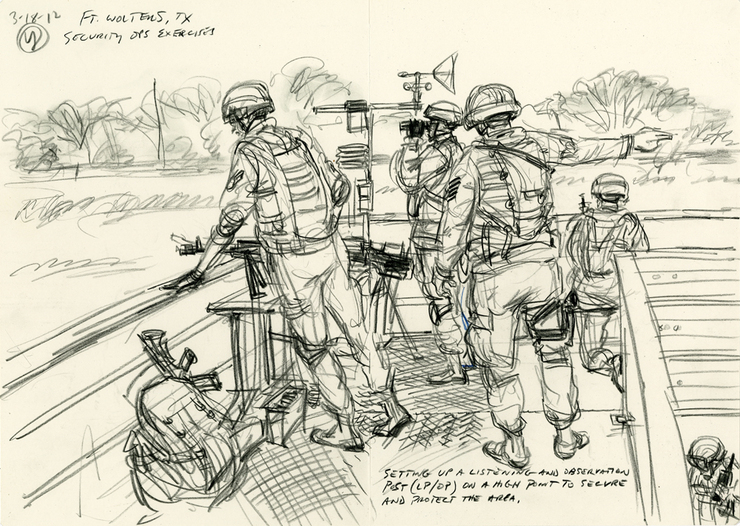 When you are attempting to cover hundreds of trainees undergoing exercises, the wise thing to do is accept that you will not be able to capture the chaos of the constant movement. It wasn't often that I could just plop myself and draw once the settling in started. These soldiers weren't all in the image at the same time. But as they came in and out I dropped them in. Here the trainees are setting up a listening and observation position on an elevated level of a captured village. As SMSgt William Brown explained to me in an email when I sent him the drawing: " What is happening in your drawing is that after/while they are clearing their base of operations they are setting up a listening and observation post (LP/OP) on a high point to secure and protect the area. The elevated position gives them better and further visibility of the surrounding area but also exposes them more to hostile fire because they themselves are more visible. As you continue to build your base you harden those positions to better protect the airmen posted there but they are never completely safe but it is a necessary risk to protect the masses." 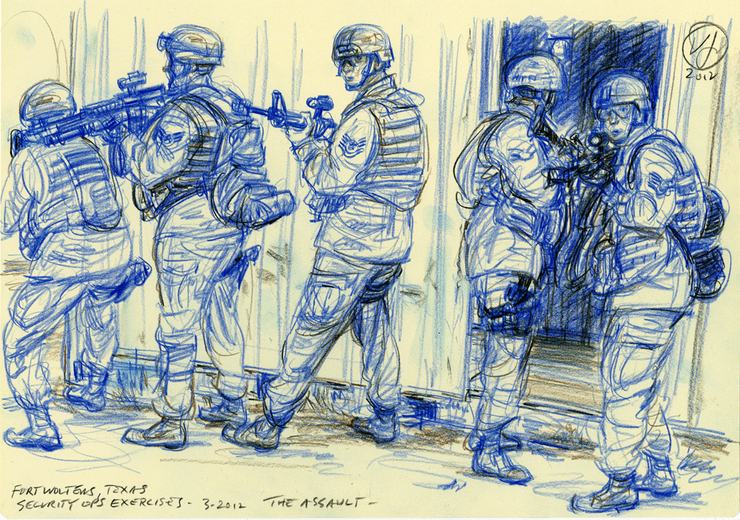 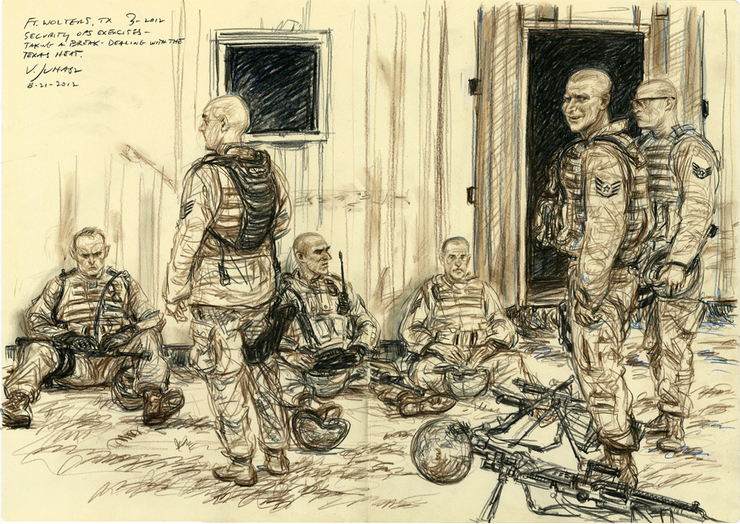 I was hoping to capture the exhaustion following an assault. It may be a mock village and a mock enemy, but the gear and armaments are still the same heavy and you are running around like your life depends on it.
Latest
The Girl Who Would Be Free by Ryan Holiday THE BOY WHO WOULD BE KING by Ryan Holiday In the Company of Marines continues Invested in Portraits Three for John Bolton The Bigly Rolling Stone Cover The Prodigal Son Returns- In the Company of Marines- Part 1 The Prodigal Son Returns- Part 2- On the Bataan with the 24MEU Keeping Busy- Part 9 Good News and Bad News Goin' Down, Moses- Keeping Busy Part 8
Topics
Topics
AT YOUR STANDS NOW
Archive
© 2022 Victor Juhasz