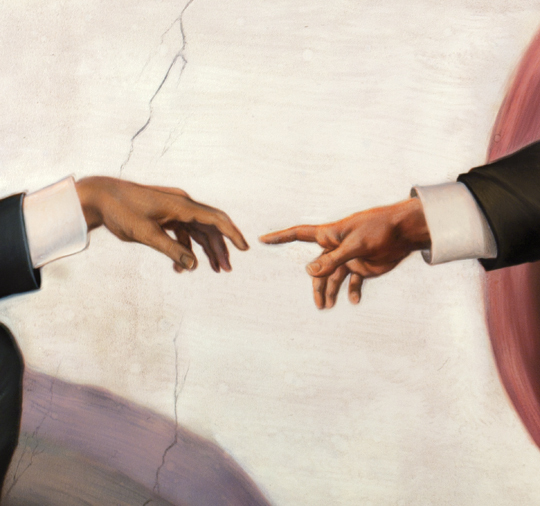 The elegant ballet of hands.
This week I was asked to paint the 'Creation' section of Michelagelo's Sistine Chapel masterpiece.
Because I spent so much time on it and because it's an alternate take on the current Time cover, I thought I'd post it here.
The idea is that Obama has always appreciated Ronald Reagan's ability to communicate and transform the country in a way other presidents had not.  Quite a goal for a young president to aspire to, aiming not just for the presidency but for a position of historic prominence.  On paper he's done just that, having passed sweeping reforms of the financial industry, saving the car industry, stabilizing the financial storm he was handed and reforming health care.  Missing in his first two years was the thing we assumed Obama would excel in, talking to the American people.  In recent weeks, from the lame duck until now, he's done a better job shaping the debate.
Back to the artwork.  Time went with a powerful photo manipulation of Reagan and Obama side by side.  I can't argue the choice (I hope others also refrain from saying which is better; it's all good).
My assignment was this touch of the fingertips.  In retrospect, it conceptually put Reagan in a god status and had him anointing or creating Obama in his own image.  It's too lofty a comparison and leaves out how much Obama disagrees with WHERE Reagan took the country.  In almost every way, from deregulation to trickle-down economics, Obama is a complete opposite.
Still, the idea is a clever one and I enjoyed working it out. 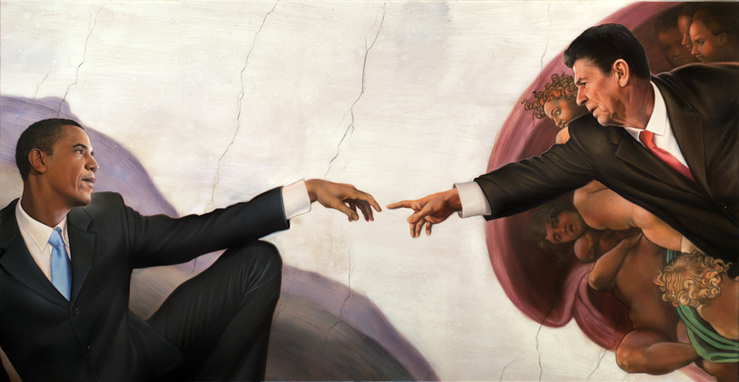 My final art. The width makes viewing it here on Drawger difficult. Now I know how Burckhardt feels with his horizontal paintings.
I thought I'd offer some insight as to how I can crank out a quick sketch of an idea by drawing with the selection tool in photoshop.  Using the original art as my starting point, I need to draw a suit over the pose.  I draw the outline of the figure, including folds where they would occur and then fill the area with a middle dark grey.  I then paint the lights and darks in until it starts to have shape and form.  Usually it works as this point and is enough to get a sketch approved, as it had in this case.
To go from this to a final file to work from I shot myself in the pose and then stretched and pulled the reference in DISTORT or WARP.  This makes my reference match the drawing I made and assures that my final will come closer to the free drawing I made of Obama in recline, long gangly legs and all.
I've embraced the power and effectiveness Photoshop can provide and can now work much more quickly.  In fact, it's only last year that I learned of the warp  tool in TRANSFORM.  This was a revelation and makes it so much easier to make things fit and work my original intent offered in sketches.  By building my reference this way my illustrations look less cobbled together like your average head-swap-out.  With so much of that going on out there, I need to assure that the paintings look natural. 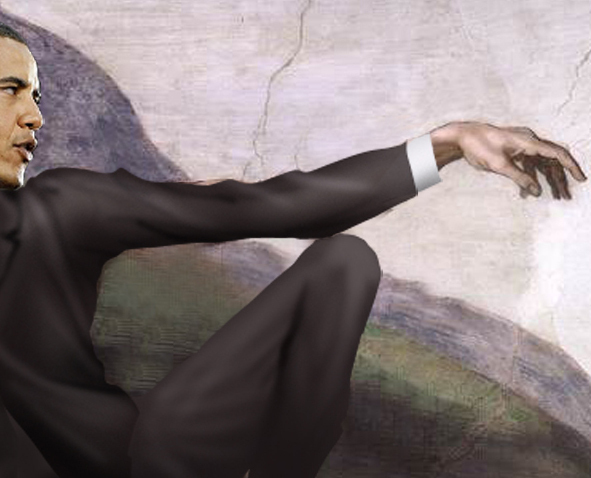 Here is the section of the sketch that is drawn and painted with the LASSO tool. Nothing fussy, just enough to indicate where it will go and how it will look. 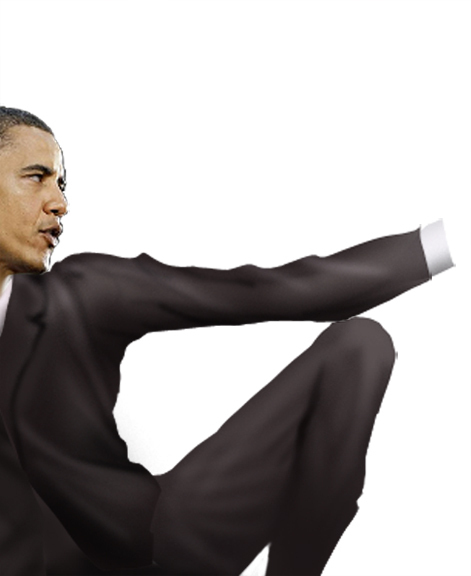 Alone with the background knocked out, it looks crazy, but sketches are supposed to look that way. They show the intention of what you imagine and then you have to make it work. 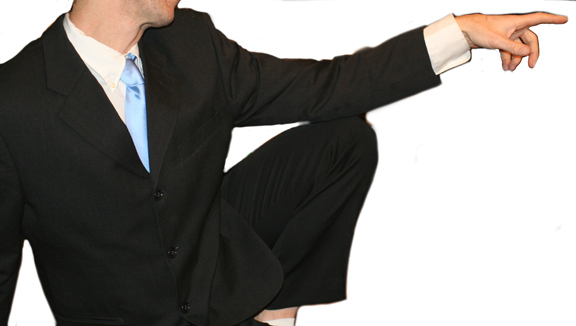 Knowing how my pals love to find embarrassing shots to mess with, I knocked out my head in this reference shot. I also took out the messy chords and bookshelf that is my studio. Here you can see how I look in the pose. By distorting this reference I get a final reference that is perfect. A huge time saver and it takes the mystery and the anxiety out of a marathon painting session.
I still have to do the paintings though and as I wrote about it earlier, a master copy is sometimes a freeing exercise.  With this painting, having never been to the Sistine Chapel OR have I actually seen a great shot of this  section, I'm left to look at images on the web.  Man, there are so many different exposures and versions of the iconic painting out there.  Some appear to be shot before a recent fix up and look darker and more romantic in my view.  The fixed versions look a bit too bright and clean.  I mean, why not put the arms back on Venus de Milo?  Victor Juhasz saved me late in the game with a helpful scan that allowed me to kind of figure out the angels behind God.  I still fudged it a bit.
I didn't try to outline the paintings as Michelangelo did.  The underdrawing appears to rise up to the surface in many places.  I wanted the likenesses to hit and left that part out.  What I struggled with was something I wondered about quite a bit; why all the tangents?  God and Adam's heads almost touch the items behind their heads;  Adam and the landscape and God and the fabric.  I have a particular annoyance with unintentional tangents that tend to freeze figures or object in paintings.  things skimming the edge of and object tend to visually attach themselves to the objects.  What nerve I have to suggest that Michelangelo made an mistake!  I would never suggest or imagine such a thing.  So, I then have to wonder if my hard line aversion to tangents needs an amendment.  I think so.
In Michelangelo's Creation, God is 'IN" heaven and reaches out of the heavens to touch an earthbound Adam.  His head below the mountain line that curves over and down to his arm  Adam reaches up from earth to the heavens to meet god's touch.    So, tangents can work to further highlight the area of a work that is free.  With heads and curls all breaking the lines of background elements one wonders if the touch would look like such a focused and monumental event?

As I stated earlier in this blog, I love these master copy assignments because of what I learn in the process.  Learning never ends. 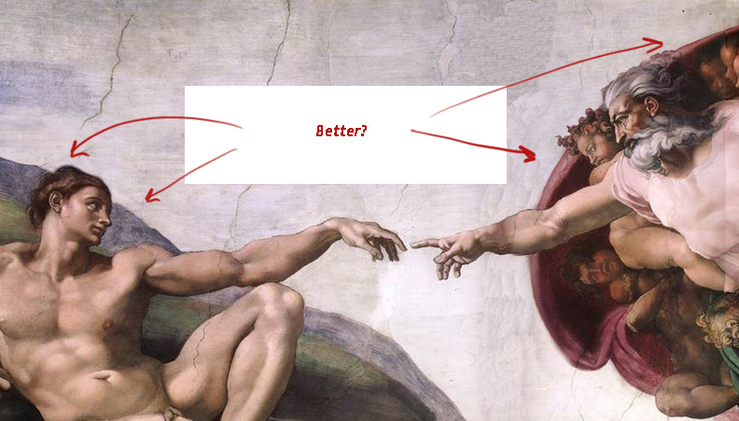 Doing this felt like recording over Imagine by John Lennon to add hand claps or tambourine. 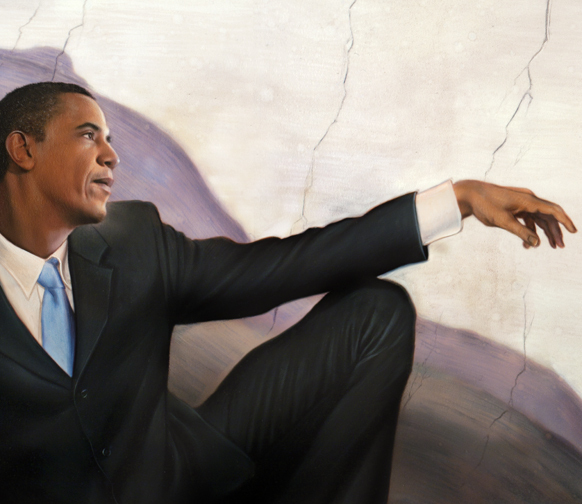 I went with the tangent. If it's good enough for Michelangelo... 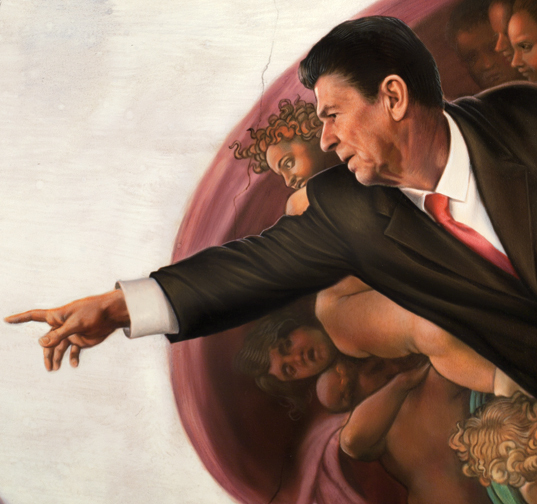 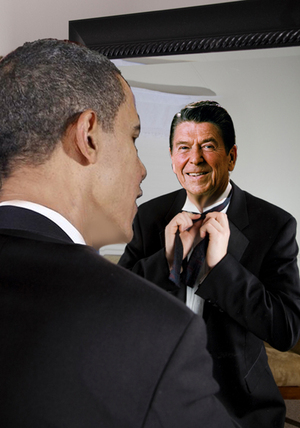 Here is a sketch that was not chosen.  Obama in the mirror.  Who does he see?  What does he hope to be?  IN the end it's not quick enough of a read and the expression on Reagan's face is EVERYTHING in this potential painting. 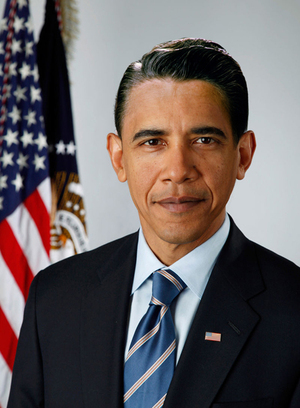 Of course this would have worked best as a digital cover.