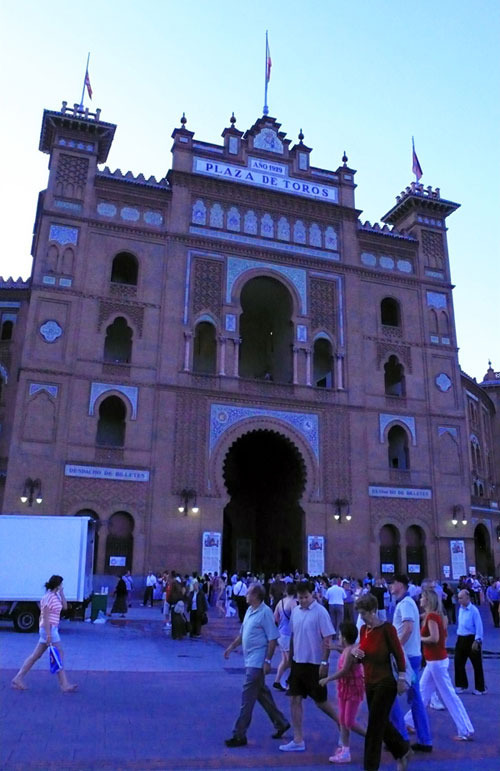 
Plaza De Toros felt a little strange.  The idea of attending a bullfight was daunting.  After all, I am not accustomed to watching a man singlehandedly confront and kill a massive bull.  The idea of nakedly confronting an animal that fierce is beyond me. I am not that courageous or that cruel. I pretended I was watching a dance.  A decadent dance.
Years ago, as an art student, I painted a portrait of the great Manolete. I also executed several charcoal drawings of bullfighters.  These drawings represented a crossroads in the evolution of a personal style.  But the selection of the subject matter also revealed a cultural influence that was genuine.
My father was of Spanish, and Mexican descent.  He grew up in Taos County, New Mexico, in a little mountain town called Penasco.  He was, by all accounts, a hell-raiser, and rode freight trains to Colorado and Utah in his youth. His favorite sports were boxing and bullfighting, and he loved to fire his .45 caliber revolver. My mother was of Italian, and Mexican descent. She was a lover of animals. Had they found themselves at Las Ventas, she would have stayed outside and prayed for the bull while my old man would have venerated the Matador while he sent the bull straight to hell. They listened to a lot of Mariachi music when I was young, and there was a strong Latin underbelly beneath our overtly American skin.
The bullfights, six in all, went according to the same sequence of actions.  The bull is released into the ring, and there he is distracted and exhausted by several assistant Matadors with capes.  They yell, “hey, hey, toro” as they wave their capes in front of the bull and then duck behind a wooden wall that the bull cannot penetrate. This causes the bull to run around the ring. Pretty soon after that, the Picadors, two of them, ride out on their horses. And they are impressive!  The horse is powerfully built, and his eyes are wrapped with a cloth covering that allows no eyesight.  He is completely protected with pads under his belly, and around his neck and legs.  The Picador himself has his feet is metal stirrups, and it looks as if he is protected from the waist down. He carries a long pole with a pointed end. The men with the capes artfully maneuver the bull to the Picador. Then the bull charges the Picador, lifting the horse off the ground.  The Picador stabs the bull two or three times, causing the animal to bleed from his hump. Two sets of decorated darts, or Banderillas, are then stuck into the bull.  The Matadors work as a team and they are extremely professional.  The head Matador stands aside during the preliminary stages (Tercio) of the fight, observing the bull carefully as the assistants, the Picadors, and the Banderilleros do their work.
It is here that the Head Matador goes to work, displaying tremendous skill and courage.  Through a series of passes (Faena) he exhausts, confuses, and dominates the bull while trying his best to entertain the boisterous crowd.  Finally, the Matador administers the kill (Estocada) with his sword. All of this seems to give the Matador extreme advantage over the bull, but I wouldn’t say it too loudly if you happen to be rooting for the Toro.  During one of the fights, it took the Matador three tries to get the sword into the bulls hump. The sword bounced harmlessly out of the animals back, much to the Matadors embarrassment. On the last fight, the Matador damn near bought the farm.  The bull caught his right side, and the young Matador was flung high into the air, and then onto the ground underneath the head and horns of the massive animal.  The Matador instinctively covered his head and curled his body into a fetal position as his assistants rushed the animal, furiously waving their capes and yelling to distract the bull.  Afterwards, the Matador dusted himself off and executed a series of passes while he courageously dominated the animal.  And when he killed the bull, he seemed to take particular pleasure in doing it.  He drove his sword flawlessly into it’s massive back for the “Suerte de Matar.”  Then he taunted the bull, as it stood motionless, dying.  Usually, after the matador drives the sword into the bulls hump, the bull will want to fight for a short period of time.  Death is not instantaneous. Then the bull suddenly weakens, standing still, paralyzed, while the assistant bullfighters stand on either side of him, waving their capes in a manner that causes the bull to move his head from side to side. The bull collapses onto his front legs and rolls or pitches onto the ground in seconds. This particular bull, unlike any before him on this night, rose up in the face of the Matador after falling to his knees from the fatal wound.  He was the only bull that did this.  It surprised everyone. It was as if he was saying, “Fuck you!’ to the Matador. ‘Your nothing little miss matador!! You bastard!’ ‘You and your fucking suit of lights.”
The crowd let out a collective “ooooohhhh!” when this happened.  The Matador seemed a bit undone, and had to come back and taunt the dying animal for a second time.  Finally, the bull collapsed and an assistant administered the fatal blow with his dagger. That was one hell of a bull! 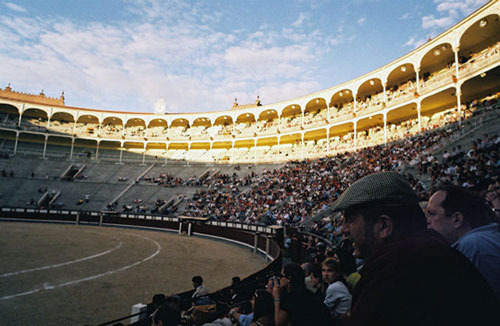 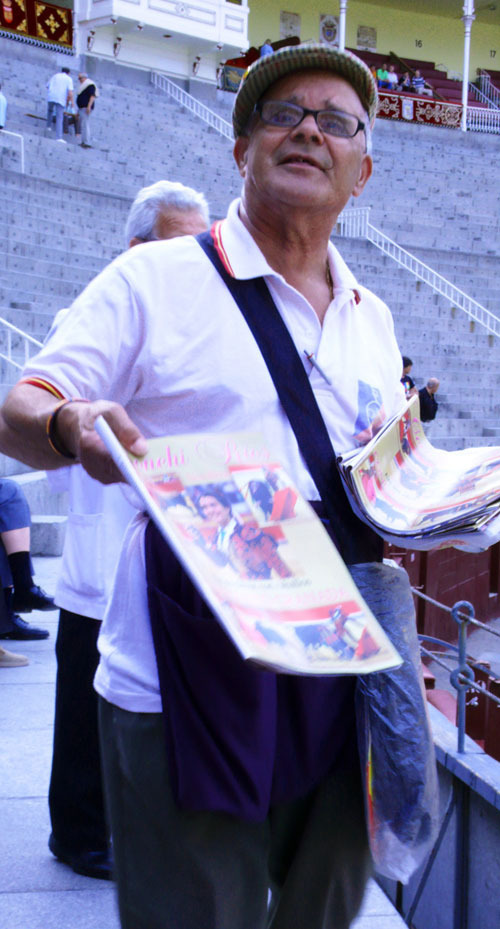 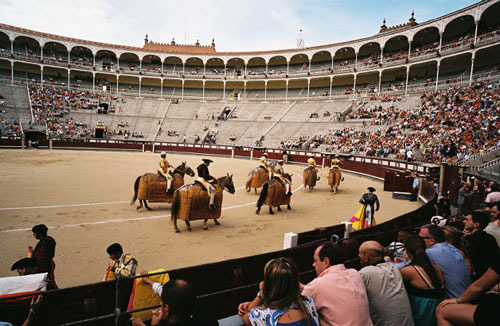 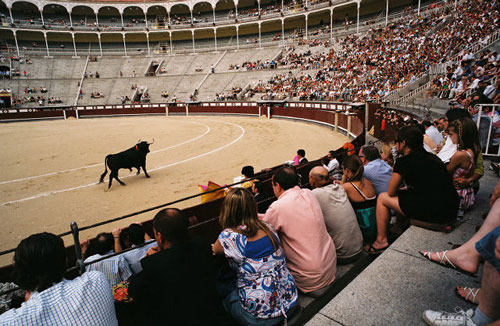 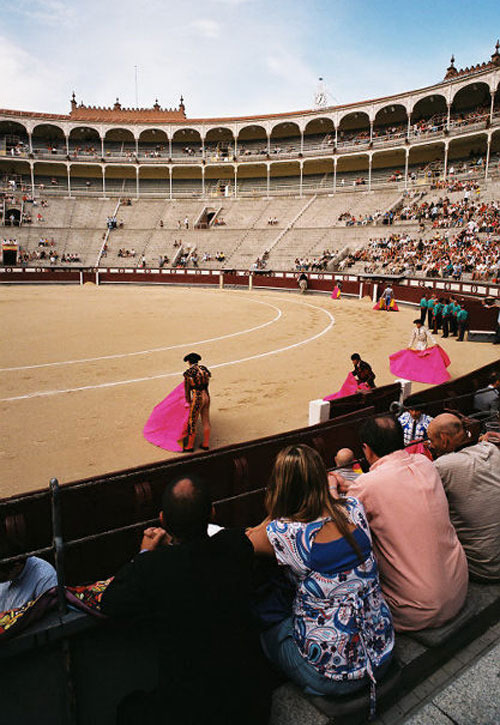 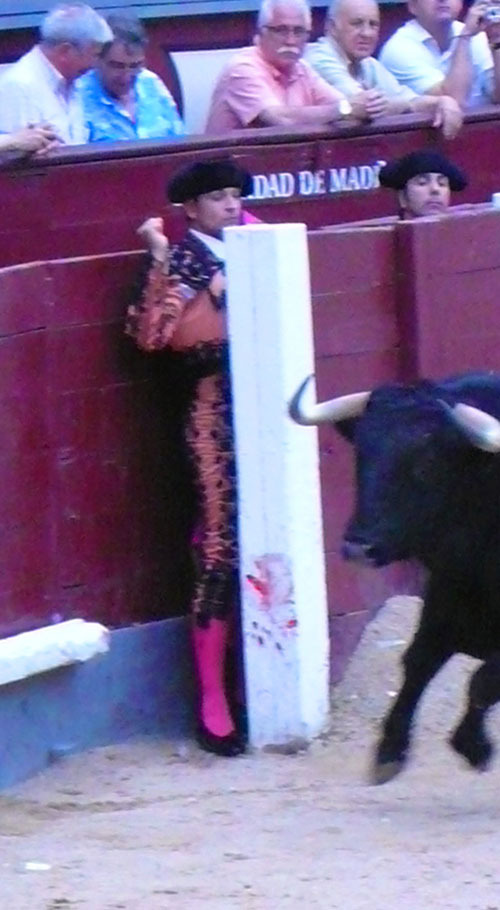 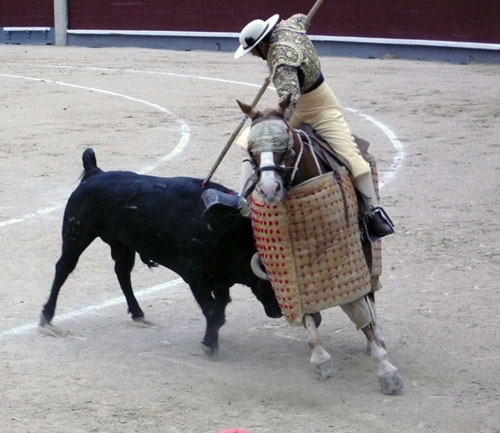 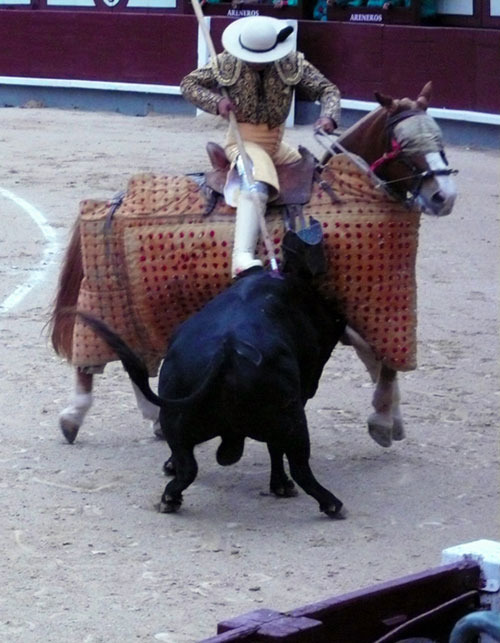 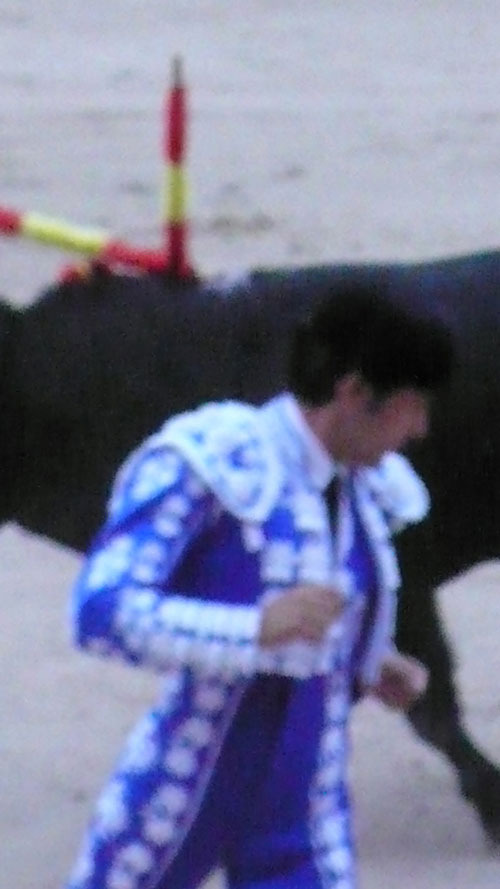 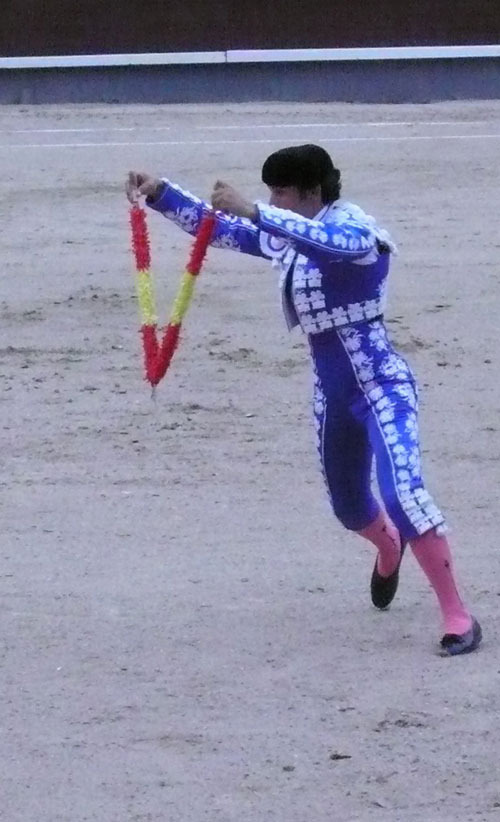 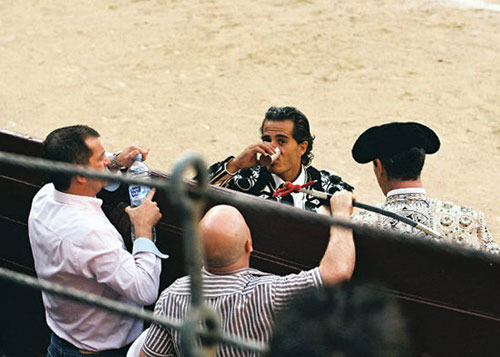 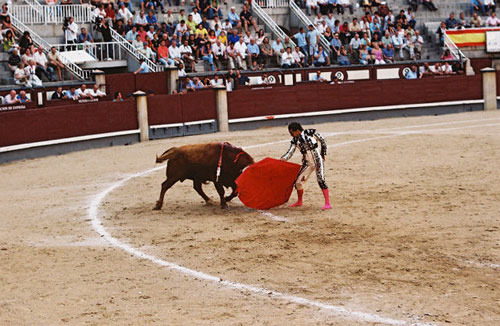 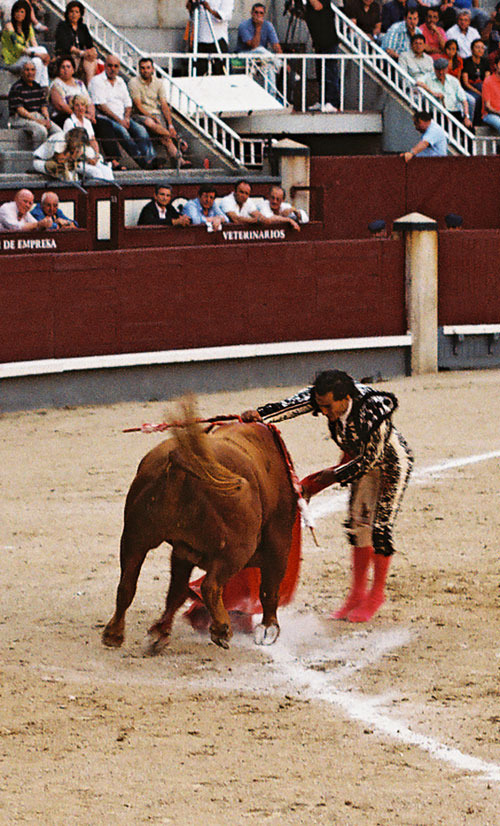 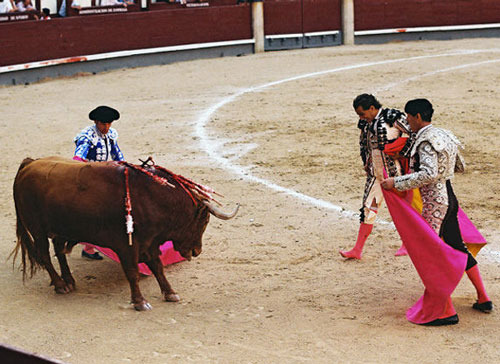 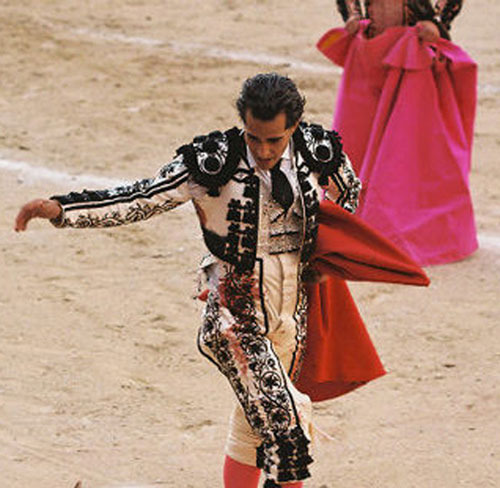 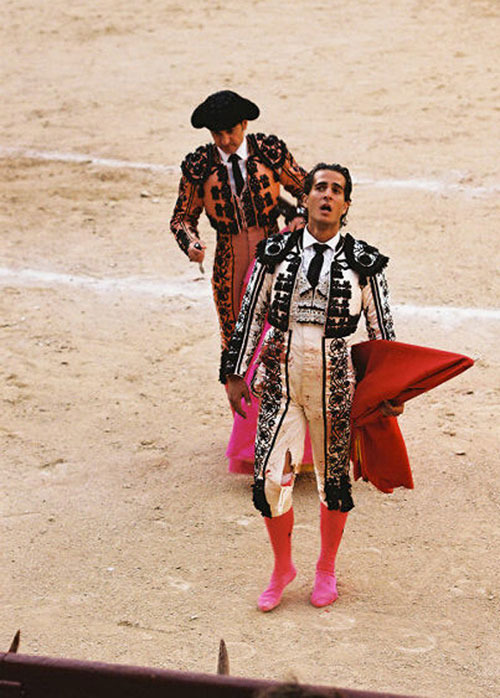 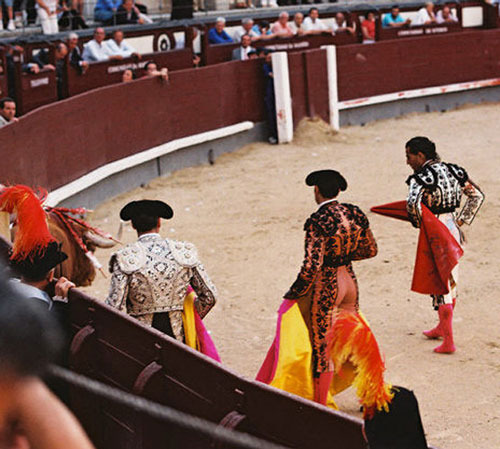 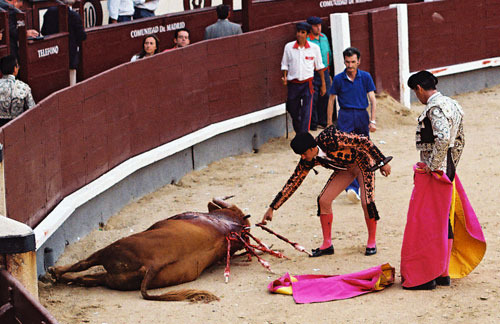 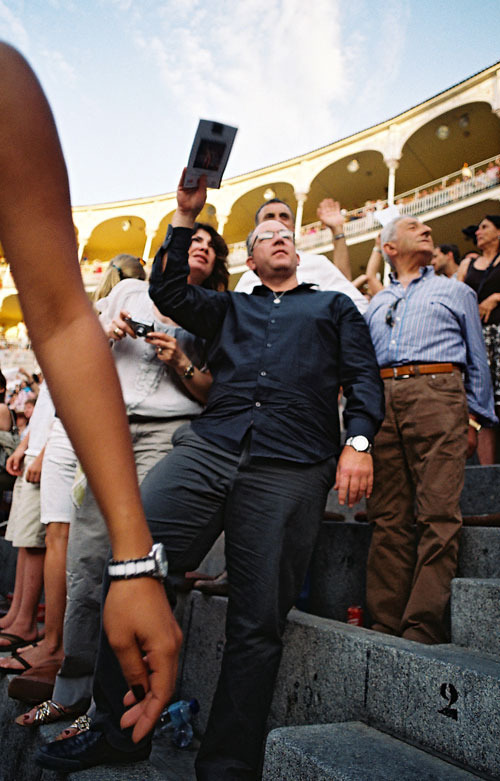 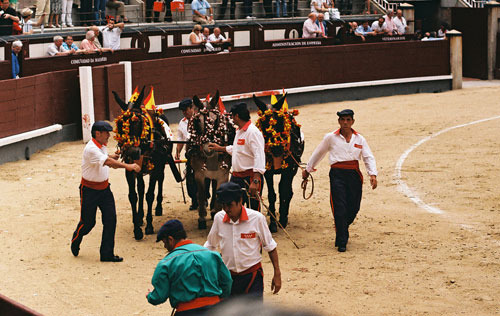 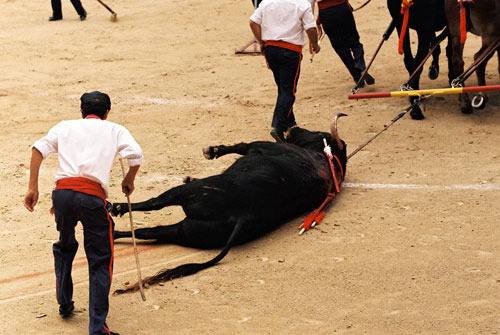 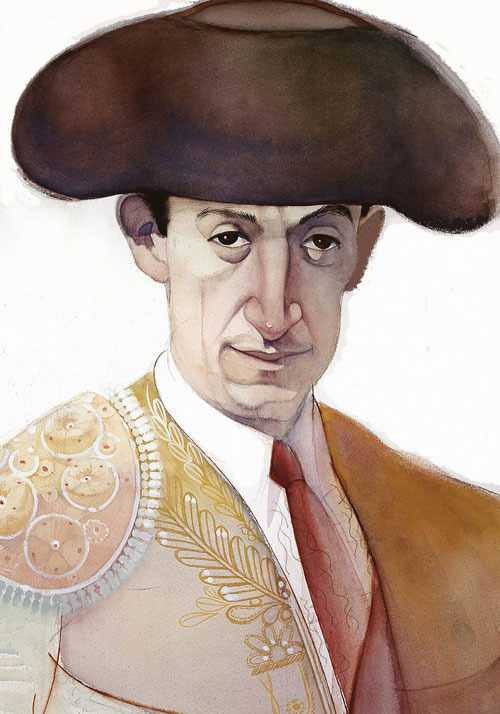 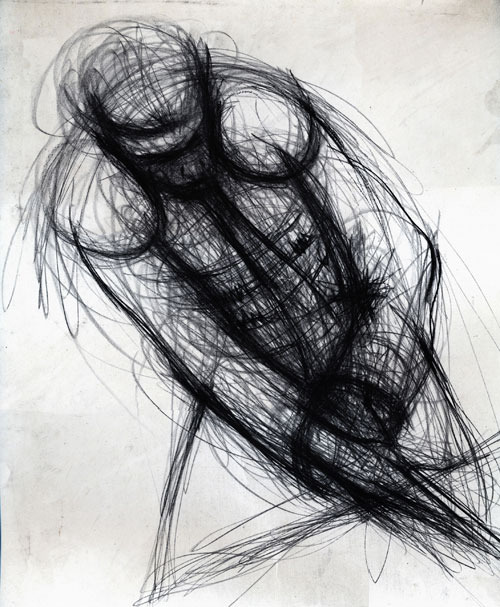 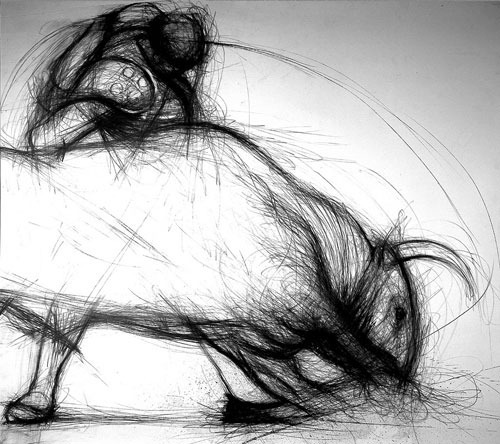