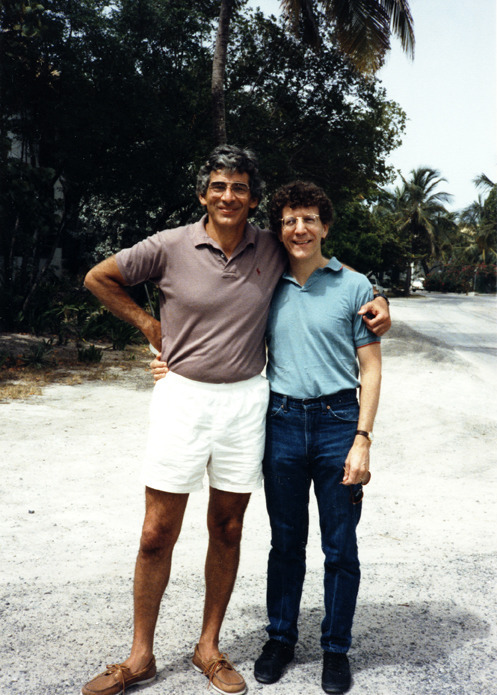 In early May, 1986, Alan E. Cober called me to ask me if I'd participate in an Illustrator's Workshop. It was to have taken place in Paris, but due to a series of terrorist bombings there, the group decided to move the event to the isle of St. Martin. I am generally loathe to travel, but it was an honor to get to spend some time with Alan, Bernie Fuchs, Fred Otnes, Mark English, Robert Heindel and Bob Peak. Did I mention that Maggie loves to travel and loves the sun and sandy beaches?

When I was in art school in Chicago in the early 60s--and a few years before I stumbled upon Seymour Chwast and Milton Glaser at Pushpin Studios--Fuchs, Peak, English and company were the heros of illustration. I loved their work, but they intimidated me with their ability to draw with ease all those handsome men and beautiful women. I was relieved when I discovered R.O. Blechman and Chwast. Funny looking people inhabited their illustrations. No handsome men, no curvaceous women. No stylish Ford Fairlanes.

But Alan was an anomaly. Obviously, he drew beautifully, but his illustrations weren't filled with sleek women and urbane men standing around sexy automobiles. He produced drawings of quirky, real life characters with baggy eyes and lumpy bodies. He drew hard-core prison inmates and filled sketchbooks with the intense faces of the mentally ill. Along with Chwast and cartoon-influenced illustrators like Bob Blechman, Alan became one of my chief inspirations.

The Night I Met Alan.

A year or two after I'd arrived in New York City in 1976, Dagmar Frinta invited me to attend a gallery opening. I can't recall much about that night, but I do remember Dagmar asking me if I'd like to meet Alan Cober. He was engaged in conversation with some friends, but Dagmar tapped him on the shoulder. He turned, delighted to see her. Introductions were made. It was one of those uncomfortable moments when the fan gushes and the star listens politely. I could see he was anxious to return to his friends, so I gushed a final time and began to move away. Alan hadn't caught my name, so he asked me to repeat it. I did and he clasped me in a huge bear hug. "It's Elwood Smith!" he roared and yelled to his wife to come over and meet one of his favorite illustrators. An excellent night.

Back to Illustrator's Workshop, July 1-4, 1986, Saint Martin, a tropical island in the Caribbean. Aside from the high cost of food (an ear of corn was going for five bucks) we had a great time. (Everything was imported from the mainland except sunshine, rum and sugar.) I got to hang out with famous illustrators--when they weren't golfing--and I was treated by the participants like a celebrity. But the moments I recall most vividly were the hours spent with Cober.

Maggie loved to swim and so did Alan, so they hit it off. I was content to sit with Ellen, Alan's lovely wife, in the shade of a palm tree reading books while Maggie and Alan dolphined in the clear, blue-green waters. It didn't surprise me at all when, in 1998, an illustrator friend called to tell me that Alan died of a heart attack while swimming in Florida.

We bonded, Alan and I, but I didn't get to know him well. We would connect up from time to time over the years at illustration shows. Every time we'd promise to hook up for dinner, but you know how that goes. Didn't happen He was a visiting professor and Distinguished Visiting Artist at the University at Buffalo and he asked if I'd do a seminar for his class. We agreed to trade original art and that also became one of our unfulfilled good intentions. I considered him to be my friend and he is, without question, one of America's great illustrators. A true original.

As I was digging around the web one day not long ago, looking for information about Alan, I ran upon this short, moving remembrance by one of his former students, Sandra Guzdek. It was written a couple of days after Alan died. She gave me permission to post it here on Drawger.

Today I found out that my former illustration instructor, and more importantly, mentor and friend, Alan E. Cober, passed away on the 18th from a heart attack while on vacation in Florida. He was 62. His passing leaves me with such an incredible sense of loss, particularly since I have not seen him since his show at Buffalo State College in 1993.

I have neglected finishing this page because I did not know what to write. Every day there's something that makes me think of him; some piece of advice, a memory from class, a funny anecdote. I guess I didn't know what to say before now.

He was hands down the best instructor I've ever had. He was, if you'll pardon the language, a ball-breaker. Class schedules ran like so: assignment given out on Thursday, sketches due on Friday, finished piece for the following Thursday. (The classes were only held on Thursday and Friday because he actually flew up on Thursday from downstate New York to teach the class, then back home on Friday.) That's the way it goes in the professional world of illustration, he told us, and sometimes not even that. On top of that he expected at least a drawing a day in our sketchbooks. I remember falling behind and the fear in my heart of being caught without the requisite number of drawings was like none I had never known before.

The assignments were usually 'live', meaning that the whole class' final pieces were submitted to a publication, and they chose one to print. I actually got picked once, printed in Governing magazine out of Washington, DC. What an honour. The illustration class of '92 was a bumper crop. I am so proud and glad to have been a part of it, shaped largely in part by Cober. (Even in death, calling him "Alan" just seems weird. We always called him Cober.)

Our class took field trips to Toronto to see Henrik Drescher, a visit to Philip Burke's studio, to the Buffalo Museum to draw, to the Anthropology Lab on Campus to draw (dead creatures, including a dead person). Everything centered around drawing. In the field of art, it should. His life drawing classes were amazing — he was never interested in having the figure look exactly the way it should in nature. An interesting drawing was a hundred times more important, and it was my opposite-hand drawings that turned out to be the most interesting.

After hearing of his cancer and subsequent amputation, I wrote to him in 1996 to tell him that he was in my thoughts and how much I valued what he had taught me. He wrote back to me and his spirit was so vibrant in that letter... it's a letter I shall always treasure. I am so very glad that I got the chance to tell him what I did before his passing. I am sorry, though, that the last time I visited the university I didn't get the chance to see him because he was in a meeting.

I feel so privileged to have known him, and more importantly, to have learned so much from him. I know as long as I have the knowledge he taught me, he will remain alive in some small way.