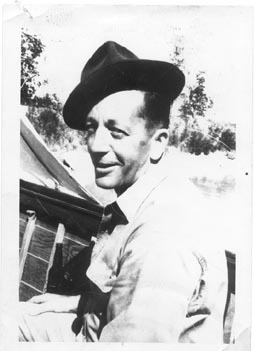 Elwood Elmer Smith
INDIVIDUAL autobiographical memory is unreliable. Time passes and our recollections distort and the gaps in our memory are filled with altered stories. Over the years, we tell these stories over and over and we believe them to be true. We are certain they are true. Close friends and relatives remember the same story differently and they are also certain their version is true.

Here's my version of a particular story. It is, of course, the truth.

This tale takes place around 1958. Maybe '59. I played guitar in a band I'd started with my pals, Bill Wright and Al Zdan, which had fallen apart for reasons lost to the decades. My father knew a man named Bussy who was looking for a guitarist to replace a talented, but unreliable alcoholic who'd missed too many gigs. I auditioned and was invited to join Bussy's String Band and played my first gig with them at the notorious Jack's Bar. My skills as a guitarist were very limited, but I could manage the polkas and and simple country music popular at the time. Bussy sang with a high, reedy voice in what would today be labeled "Bluegrass". As I recall, his wife and two daughters were in the band on accordion, bass and maybe fiddle.

The second gig fell on Halloween, way out in the sticks at a small bar. My parents, who loved to dance, said they'd stop by to kick up their heels. I loaded my new Supro guitar and amp into my washed-out blue '52 Ford. Look out Duane Eddy!

Midway into the first set, a burly guy walked past the stage, stopping in front of the band. He glared up at me for a moment and continued on to the restroom. On his way back, he aimed his hateful face at me again and headed out the back door. Turns out, he was the guitarist who'd been fired.

My parents arrived and, during the first break, I joined them at their table. Someone slammed into my chair and there he was again, the angry mug of the former Bussy String Band guitarist. He moved along drunkenly to the bathroom. When the band reached our final set, my parents waved goodbye and my heart sank. As I was unplugging my amp, one of the band members told me to be careful; the bully guitarist and a gang of his friends were gathered in the parking lot with trouble on their mind. Not knowing what else to do, I headed toward the back door, hoping for the best. Halfway from the stage to the door, my father appeared at my side. Came back to carry my amp he said. I nearly wept. Together we exited the bar.

Gathered there in the parking lot, off to our right, were several parked cars with teenagers clustered around them. The roughneck guitarist, walked up to me as my father continued on to my car with my amp. He jammed his face close to mine, looming over me like Bluto in a Popeye cartoon. Bluto, flush with booze.

"So, you think you play guitar better than me, huh?"

Me, weakly: "No, I never said that. I haven't even heard you play."

He turned and found he had nowhere to go. His pals had moved in closer to watch the beating. He slammed his finger into my chest and called me a lying little prick. The skinny replacement guitar player had to go down.

"Get him out of here or I'll break his Goddamned skull!"

My father was slightly to my left, crouched over and pulling something out of his back pocket.

"Stay out of this, mister! That a knife?"

"It's a blackjack and I swear to God, I'll break his Goddamned skull!"

Dad had been brawler in his youth, hanging out with some rough customers at the local bars. He was not bullshitting these kids. One of the bigger boys grabbed the drunken guitarist, pinning his arms to his sides and yelled for us to go. Oh, yeah.

My father told me later that he'd heard the bar was a hangout for tough customers. Reason enough, he figured, in addition to it being Halloween, to bring his blackjack. Many years earlier, he built the blackjack from a lead weight, a leather strap and electrician's tape. A coworker had been beaten by strikers at the plant where my father worked, so dad began carrying a little protection with him as he crossed the picket line.

My father was a terribly flawed man, but that night he was a perfect hero. Happy Father's Day. 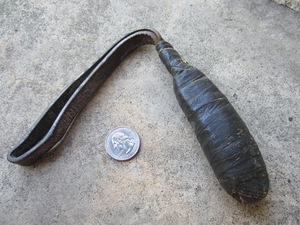 My brother, Rich, who's a police chief, said in a recent letter that it might be that an incident that involved me and my dad in the late 50s, might have influenced his decision to become a police officer. In 2006, I wrote an article for my Drawger Blog, describing my memory of that powerful moment in my life as a young man and budding musician. That prompted me to add this photo instead of the scan I'd placed here 6 years ago. The quarter gives a sense of scale. The electrician's tape must have been really good shit back then, because it hasn't budged from the lead weight and leather strap it's covering.