The Art of Grief 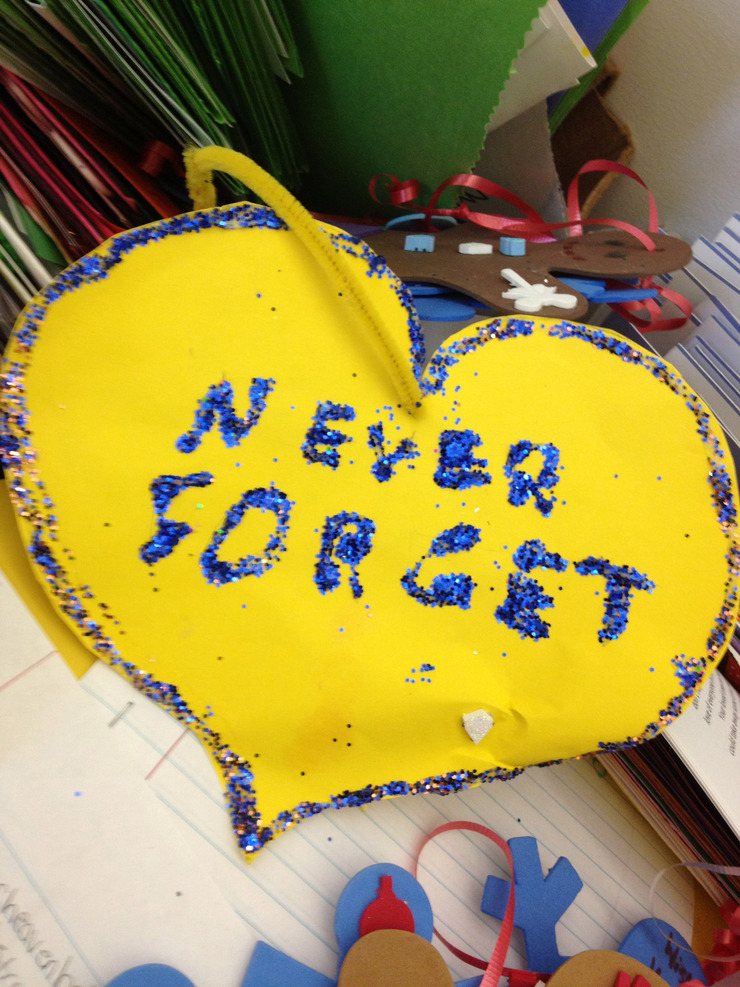 Within minutes after the shootings at Sandy Hook Elementary, memorials started springing up all over Newtown. People seemed to have a strong visceral need to give visual expression to their shock, horror and grief. People spray painted messages on sheets and plywood and mounted them in yards and on roadsides. Balloons and teddy bears festooned the Sandy Hook School sign. More elaborate memorials quickly followed. The plywood angels, banners, christmas trees and other displays appeared over and over in the media, and became rallying points for the people who poured in to Newtown to pay their respects, to mourn and to offer help and condolences. As they added their own messages, flags, banners, stuffed animals and other tributes, the shrines grew.

At the same time, people all over the world mailed in messages and gifts. The many packages and letters threatened to overwhelm the local post office. Local volunteers worked in shifts opening and sorting, and the town warehouse was soon filled to the rafters. There were donations of  tens of thousands of stuffed animals, school supplies, checks, even cash. The sorters have been very careful to take inventory, and to honor the wishes of the person making the donation. Funds have been set up, and arrangements have been made to distribute the toys and supplies.

After a couple of weeks, the town cleared away most of the outdoor public memorials. They have been carefully stored, and will be incorporated into a future permanent memorial site. There are still many private tributes all over town, everything from signs and posters to lights and snowmen.

The donations that were sent to Newtown are currently in 2 locations. The 'stuff' is in the town warehouse, and the many letters and cards are in the town hall, stored in bins stacked in tables lining 2 sides of the long front hall. My wife and I spent the afternoon there today. Along with thousands of cards and letters, there are many drawings, posters, books, cutouts, and handmade memorials of all kinds. Again, it seems like there was a universal urge to express grief and condolences with images. I saw beautiful expressions from all over the world. From a Forward Operating Base in Afghanistan, from town mayors, from groups of school children, church groups, and individual kids and families. There was a very moving letter from a prisoner in a state prison, and another from an inmate in a mental institution.

I found myself wondering what would happen to these tributes. They might eventually be ground up with the outdoor memorials. I wanted to keep a record of one that was particularly moving, so I took a snapshot of it with my phone. Before I knew it, I had spent hours there and taken over a hundred photos. I want to go back tomorrow with a better camera and get permission to take more photos, so there is a permanent record of these demonstrations of the worlds' love and grief.

People were moved to write and draw, and to send it to a town they'd probably never heard of before. They may not have known if it would even get here, or if it did, if someone would read it. I don't know if anyone who sent a card or letter will see this, but I hope so. I'd like you to know that we did get it, that your letter is appreciated, that it's in good company, and that the people of Newtown stop by constantly all day to read it and the many others, and that we are taking the comfort from it that you offered. Thank you. 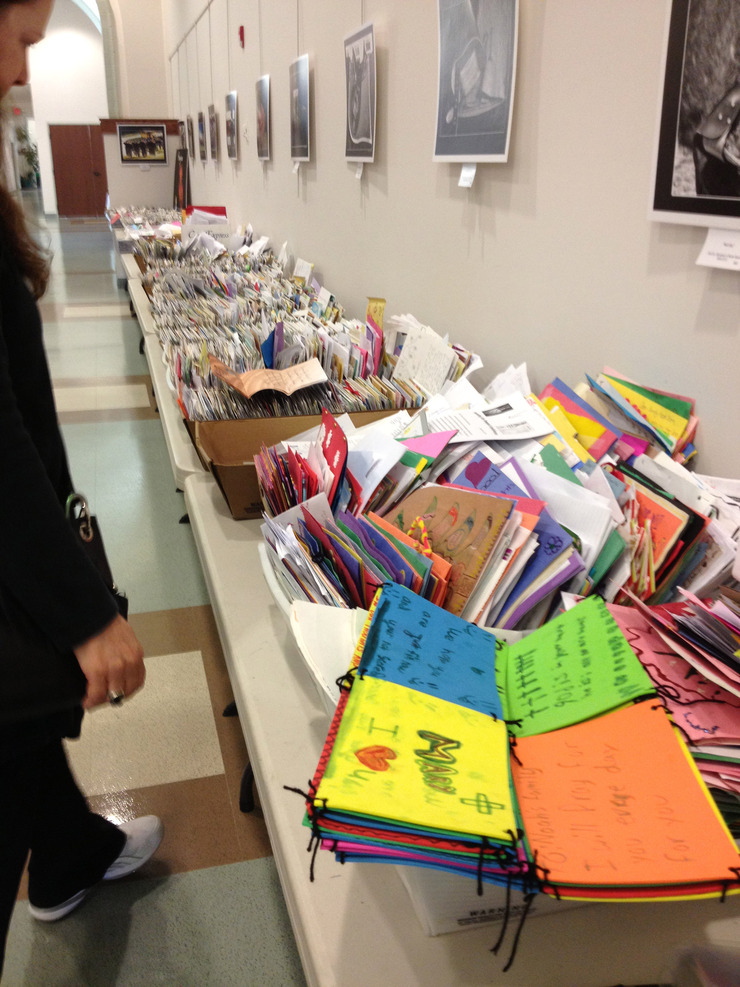 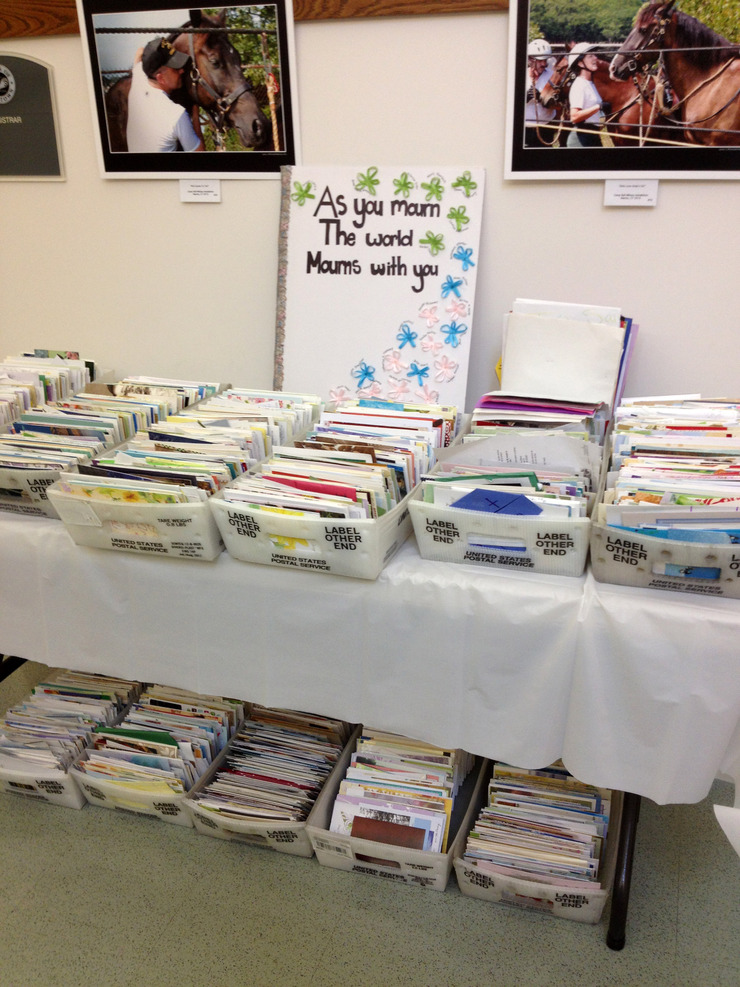 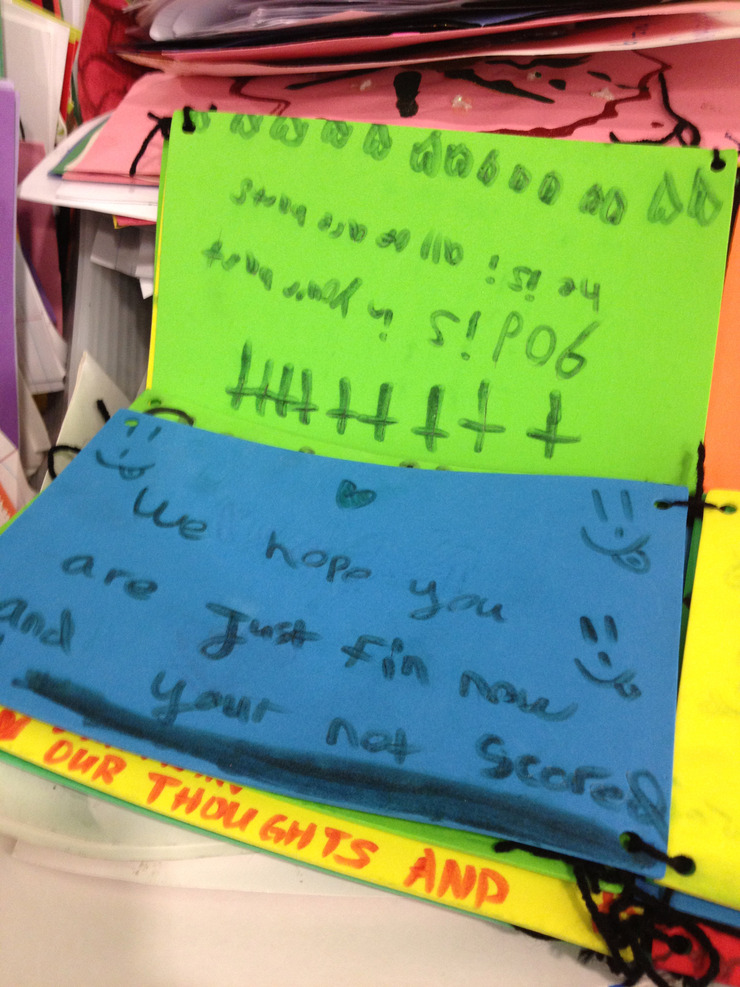 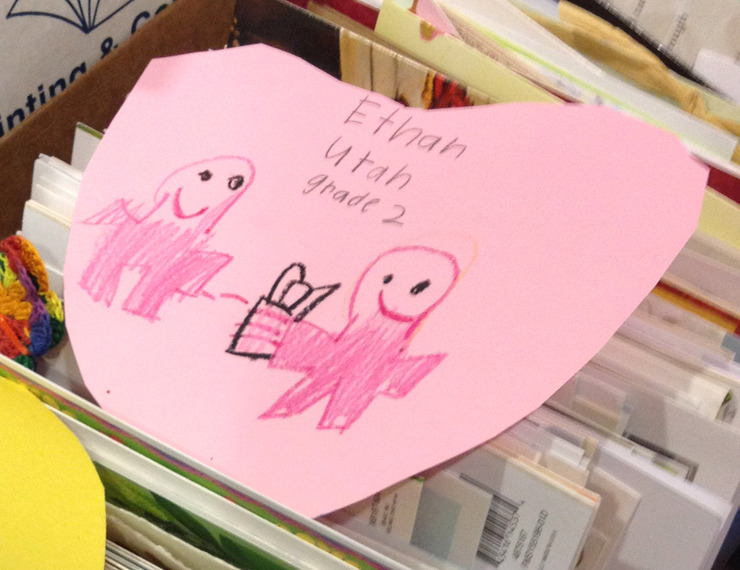 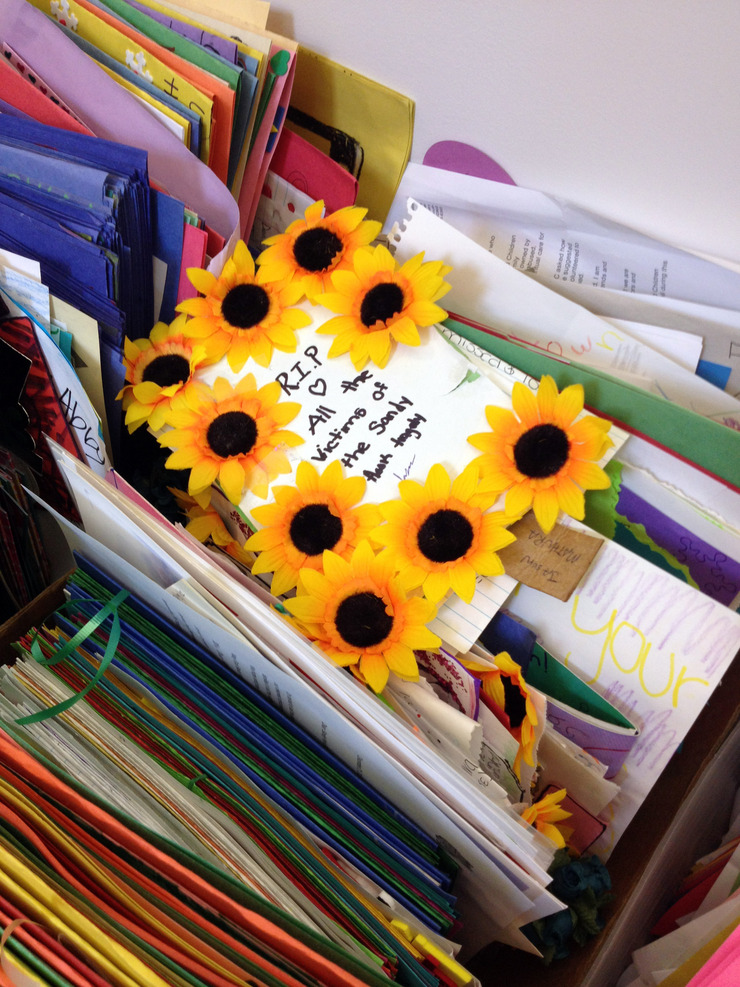 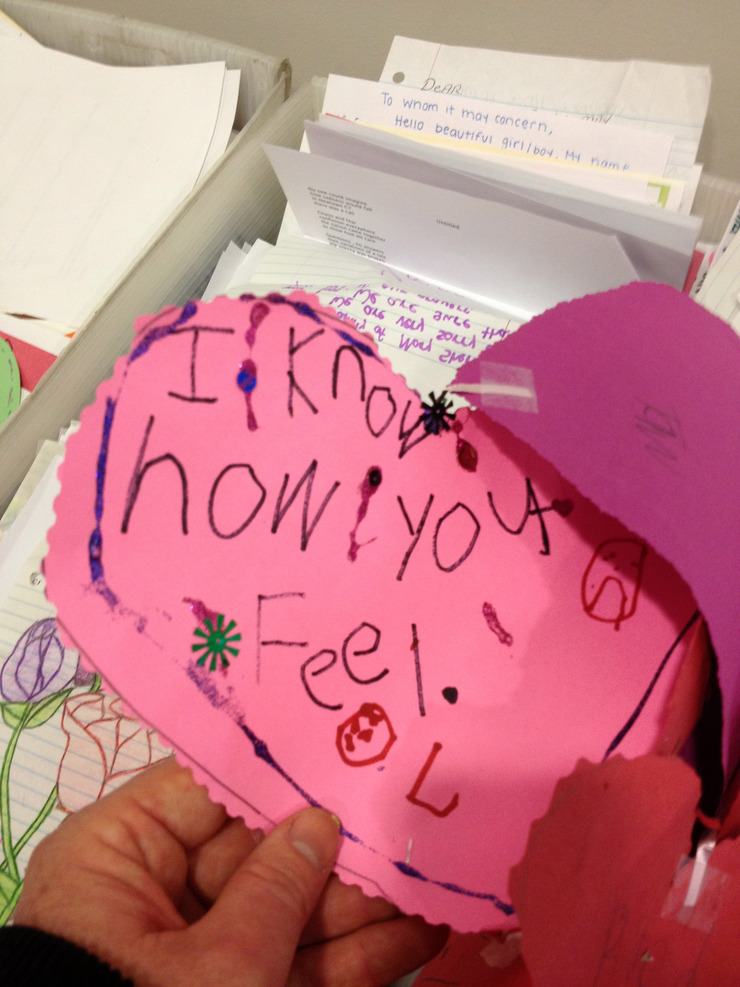 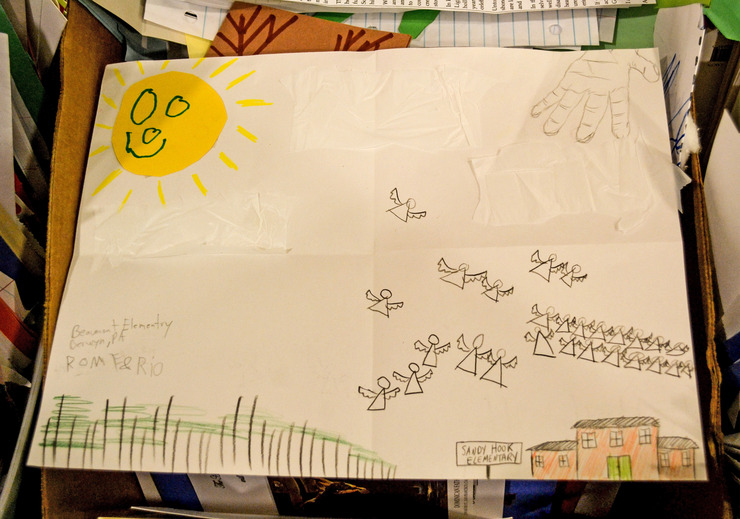 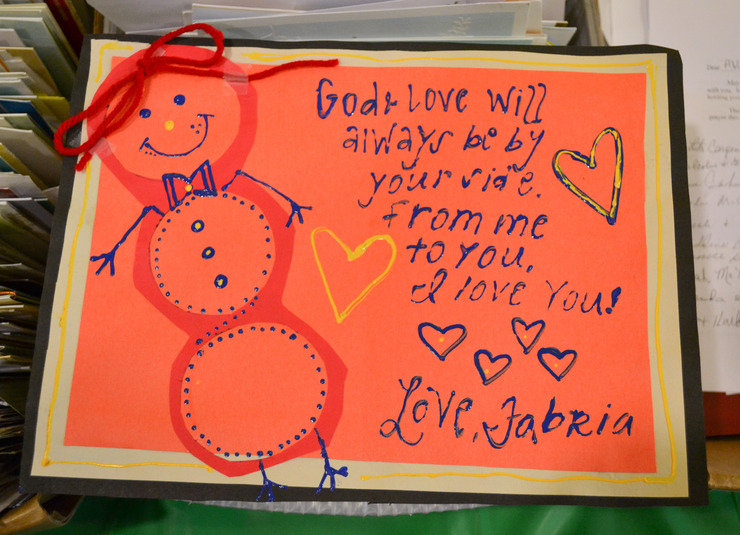 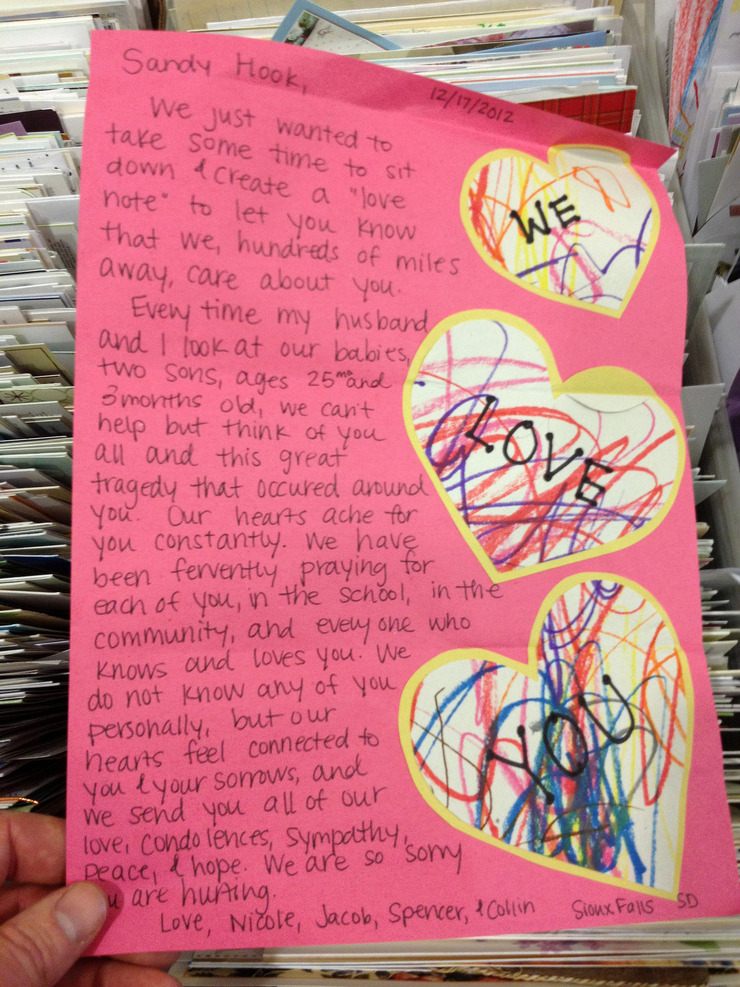 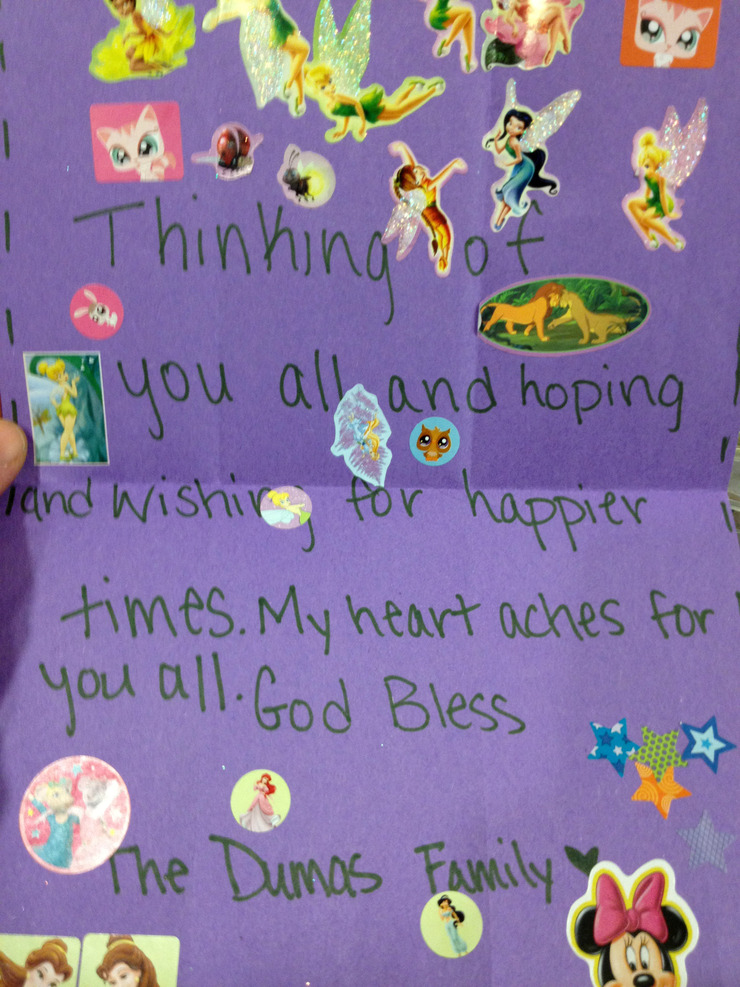 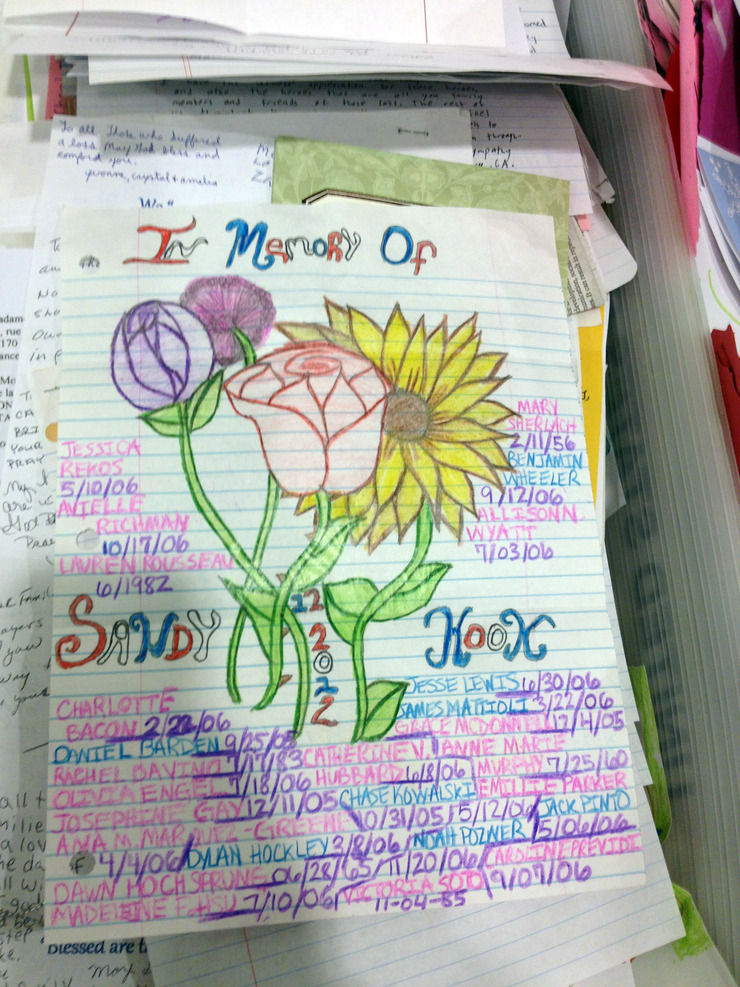 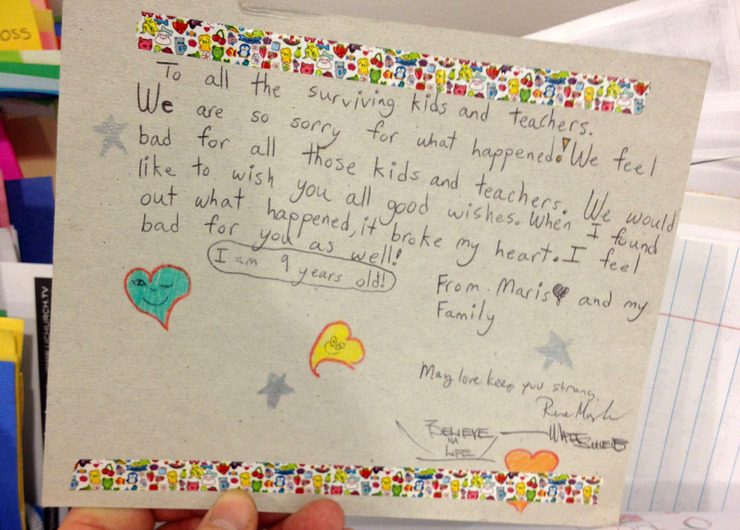 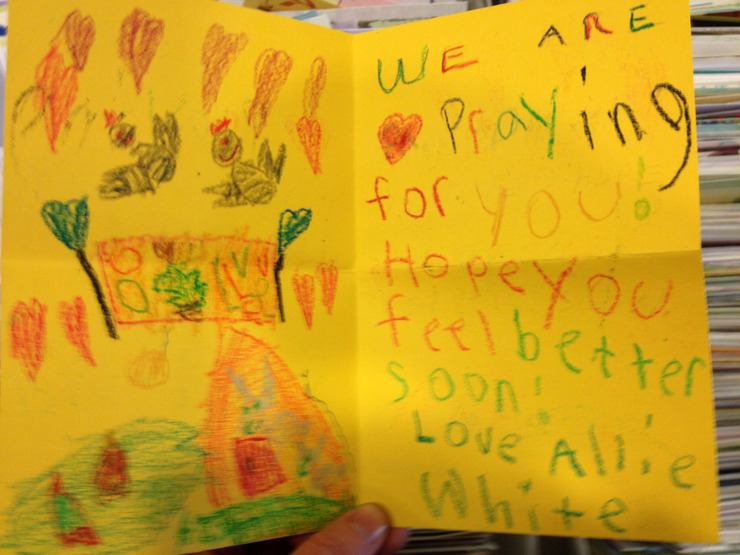 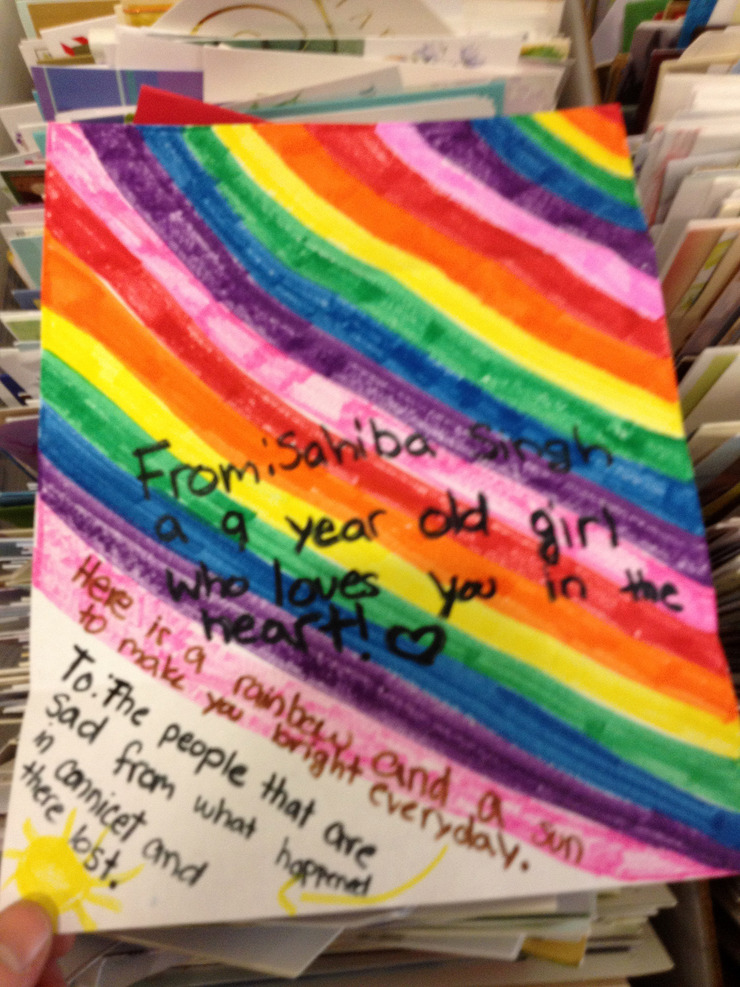 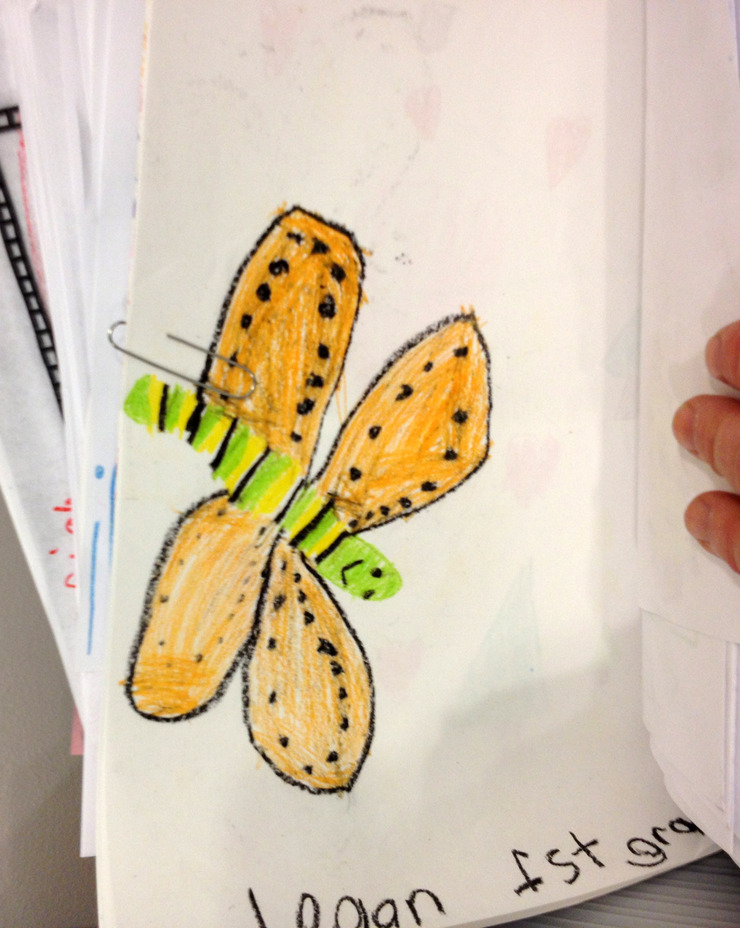 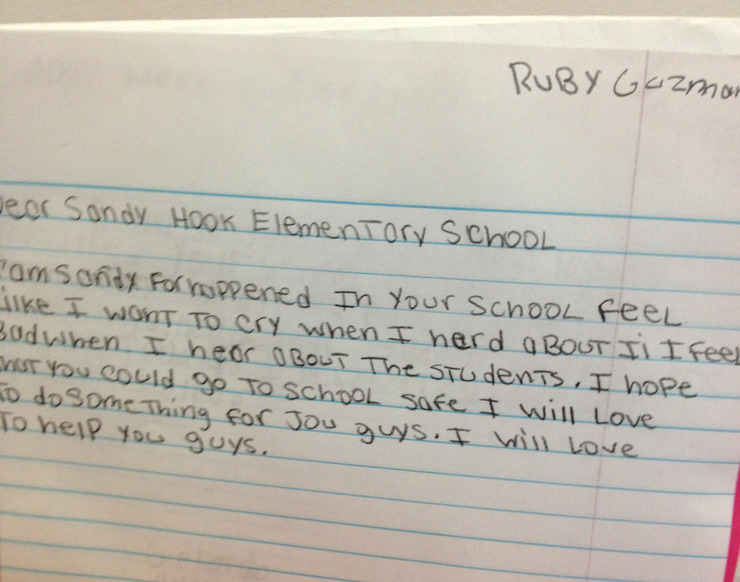 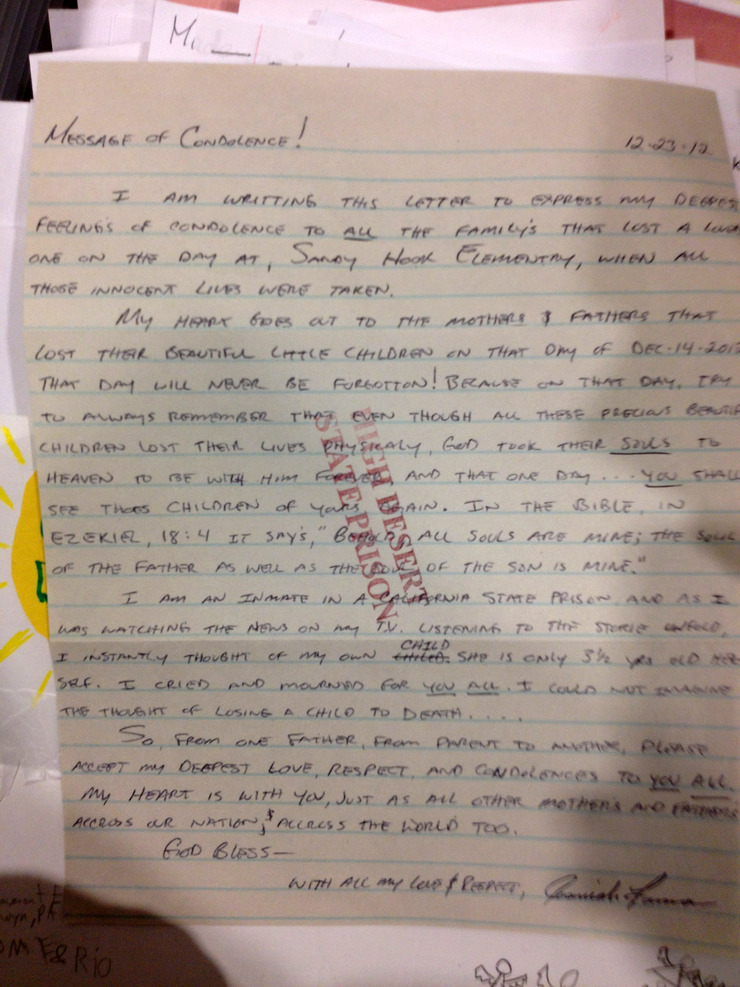 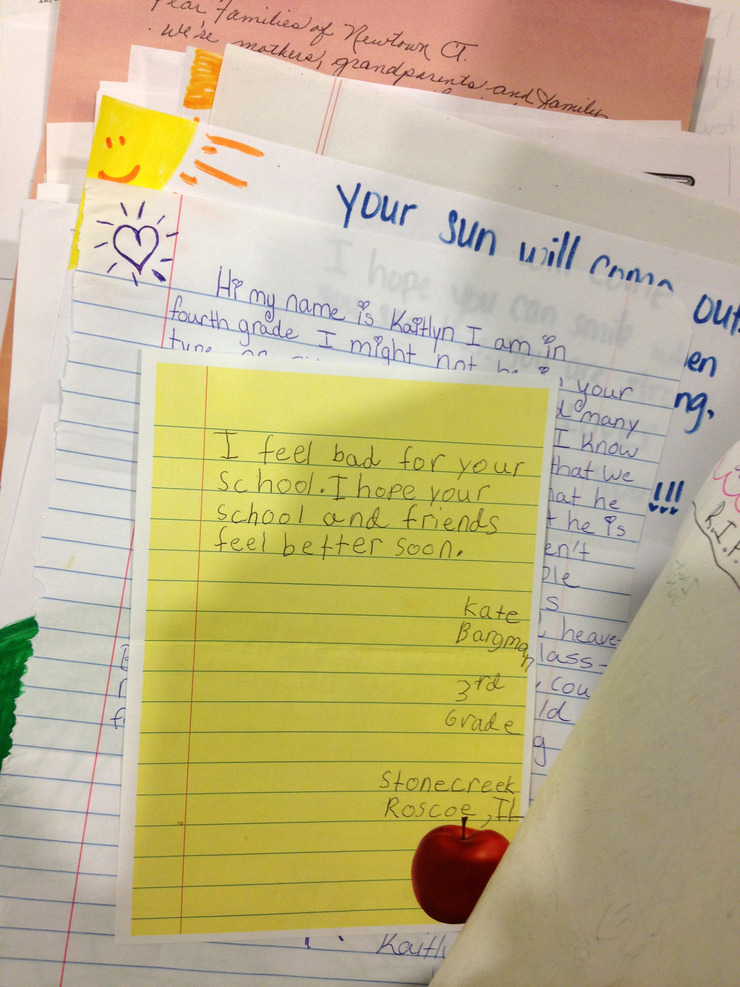