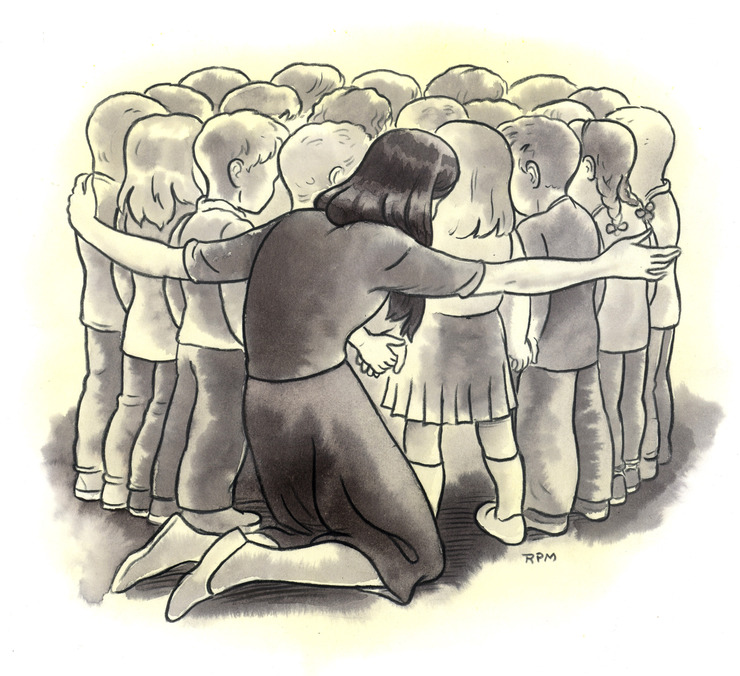 A first grade teacher sheltered her students in a closet, listening to gunshots in the hallway outside. Fearing the worst, she said she wanted these tiny 6 and 7 year olds to know that somebody loved them, and for that to be the last thing they heard, not the gunshots. Other teachers and staff risked their lives and died trying to protect children. They literally ran out without hesitation to warn others, to pull students to safety, and to put themselves between the bullets and the children.

Their incredible selflessness and bravery saved many childrens' lives. Thinking about that is helping to hold up the crushing weight of the rest of that horrible, tragic day. Because we can't stop thinking about it. I wanted to do something to help somehow, but feel pretty helpless. The only thing I can do right now is draw. It's not going to help, but I wanted to be doing something.

I'd like to dedicate this image to the teachers and students of Sandy Hook Elementary School.

We live in Newtown. Our daughter Daisy goes to Newtown Middle School, and our son Jamie is a senior at Newtown High School.  A lot of friends, relatives and colleagues have texted and called and emailed over the last day to find out if we're okay, to express their grief and horror, and to send love and support. We are very grateful for all the thoughts and wishes. A lot of people have also wanted to know more information. I think everyone is desperately trying to find something to help give this all some kind of meaning.

So I hope you'll forgive me for describing our day here for all of the people who have been asking.

We got Daisy ready in the morning and got her on the school bus at 6:25 as usual. Jamie had the first few classes free and didn't have to leave until 10 am. Some time before that we were notified by phone and email of a school lockdown. It's not all that unusual here. The schools have drills, and they also lock down the schools as a precaution if there is a robbery or anything unusual in the town, so we weren't worried. But we wanted to know if it would be over soon so my son could get into the school. So I turned on the police scanner to see if anything was going on. Usually it's silent - not a lot goes on here in Newtown. This time it wasn't silent. It was immediately clear that something serious was going on. I felt a sick feeling in the pit of my stomach when I heard an EMT say they were setting up triage units in the parking lot. Then a dispatcher said that 3 MCI units - mass casualty incident units - were en route. It was obviously a large-scale emergency. We heard ambulances inbound from towns all around us. We heard only three ambulances leaving for nearby hospitals.

Details started coming out on the local news feeds. A school shooting. Our relief at eventually seeing that it wasn't Daisy's school was immediately overwhelmed by the horror of finding out it was Sandy Hook Elementary. On the police scanner we heard cops clearing the school - they did it a total of four times. The news was talking about one or more gunmen fleeing into the woods, and we heard the cops searching. They were also searching for a vehicle - pulling vans over on the surrounding roads. We heard the dispatcher sending units to investigate suspicious people in the parking lots of other schools near us. I tried to reassure my son that other gunmen weren't coming to us. We turned on CNN for more news but it was useless - they didn't know how to pronounce Newtown, much less where it was.

We were desperate to go get Daisy, but knew we couldn't. The minute they lifted the lockdown we rushed over to get her. The roads and school parking lot were filled with grim parents picking up their kids. Daisy was relieved to get out, and a little stunned. The announcement "Lockdown!" had come over the intercom very quickly, and the teachers had jumped into action. They locked the door and covered the window with paper, while the children all crowded into the corner, like they had practiced many times. They sat on the floor in silence for 3 hours. Many had to pee, but they weren't allowed to move or make noise. For the first hour they didn't know what was happening, but then one of the teachers told the kids that there had been a shooting. One of the teachers showed the other her phone, and she began crying and left.

We originally had a plan for that afternoon - we had tickets for the Rockettes. A Christmas present for Daisy. It was the last thing we felt like doing at that moment, but we realized That it wouldn't be doing her any good to sit at home and listen to the horrible news reports coming in. So - shaking and shell-shocked, we drove into the city, making it to Radio City Music Hall just in time. Daisy loved the show, and clapped in all the right places, but every time I looked over at her, sitting beside me in the dark, I saw her sad little face. The show was amazing, but felt surreal to say the least. I clutched my phone in a death grip, willing myself to not check the local news feeds.

And then the show was over, and we were walking through the streets of midtown. It felt so odd to be in the middle of all these people - none of them seemed to know that a horrible tragedy had taken place. My wife Lucy said "there's no one here from Newtown." So we got in our car and drove right home. Even the air in Newtown seemed sadder somehow.

That evening I overheard my kids downstairs, talking quietly to each other about the day. My son said "I'm so glad you're safe Daisy."

Today, the day after, it's quiet here in Newtown. As I drove Daisy to a friend's house, we saw flagpoles in front of houses here and there, with flags at half mast. At every one, the cars passing slowed.

So - that was our day. It was a hard day for everyone, no more hard for us by virtue of our proximity.

There is a way you can help. The United Way has set up a Sandy Hook Support Fund. You can get a link to that and information about other ways to help here: