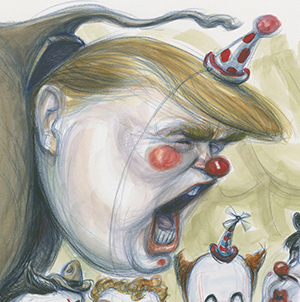 That was my first thought when I received an email from Mark Maltais, AD for ROLLING STONE and he put me on alert that a Matt Taibbi piece was being written about the GOP candidates running to be their party’s nominee for President. First response was, “Oh, sort of a clown car scenario.”  Why did I write that? The clown car image was already suffering from overuse. Any quick Google search would clearly confirm that.

Matt was in the Midwest following the candidates in Iowa. His rough, unedited piece finally arrived on Monday evening and RS needed a finish by Thursday. Matt never disappoints whether he’s writing about politics, financial wrongdoings, or even sports (there were times when he was writing a sports column for Men’s Journal that I would illustrate that I felt his eviscerations of athletes were even funnier than politicians). He’s on point but with an acid, near macabre sense of humor. The GOP piece in which Donald Trump plays a key role, almost a leitmotif, throughout the article, was great fun to read, and even though Matt made use of the clown car reference, I felt there was enough within the piece to avoid becoming but just another repetitious image maker. I had no problem using the clown theme, just not all in the car.

It was just my good fortune that the day I received the copy was also the day that the 10 candidates to appear on the FOX debate were announced. That narrowed and focused whom I had to concern myself with in the image. I emailed Mark and let him know I’d use clowns but wanted very much to avoid the car. He seemed fine with that.

A beautiful book on circuses and another one on clowns were pulled from the shelves and I went to work on ideas. My initial sketches referred to circus posters, circus freak acts, and in a right before bedtime flash, a pooping reference. Yes, poop jokes are old reliables and not to be dismissed, especially when your GOP elephant is forcing out a gigantic, snarling head of one Donald Trump, like a large wad of bubble gum stuck in a rectum.
Any of the ideas would work for me. The decision was up to editorial at RS. The responses to all the ideas were very positive but the elephant rectal image got the nod.

Once again, because of the deadline involved and the number of personalities to draw, I followed my gut and started working out the finish in pencil instead of the unforgiving pen. For any number of reasons my confidence in my crow quill skills has diminished some over the years and in crush circumstances I will trust my gut and go with pencil- not because I can erase- which I really don’t- but because I can feel the paper and the sensitivities of drawing better now with pencil.  We’re a tactile bunch, us old schoolers.

Concentration was very good and I was in the zone for almost the entire time, and time I pretty much forgot about. If I’m chuckling while working and looking at the faces I draw, then that’s a good sign. Ultimately, getting The Donald right first was paramount as he is the punchline and the line connecting all the dots. Once I was satisfied with his characterization the rest flowed along nicely. A redesign of the layout by Mark allowed me a little more breathing space with the multiple characters and even gave Chris Christie a little stretch out for a nice body scan.

The gang at RS was very pleased with the finish as was Matt. It was great fun tackling a piece by Mr. Taibbi. His writing always pushes me to, at the very least, match his contribution and hopefully bring the image up a couple notches higher than I would have anticipated. Thanks all for the assignment. 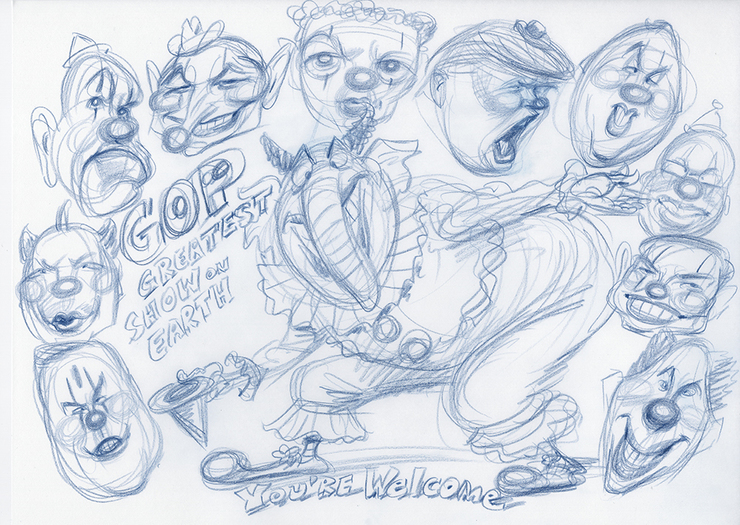 Some of the candidates are simply more fun to visualize as clowns. Mike Huckabee is one. Scott Walker, Jeb Bush and Rand Paul also seemed very adaptable. Ben Carson and John Kasich not so. Carson is remarkably bland. 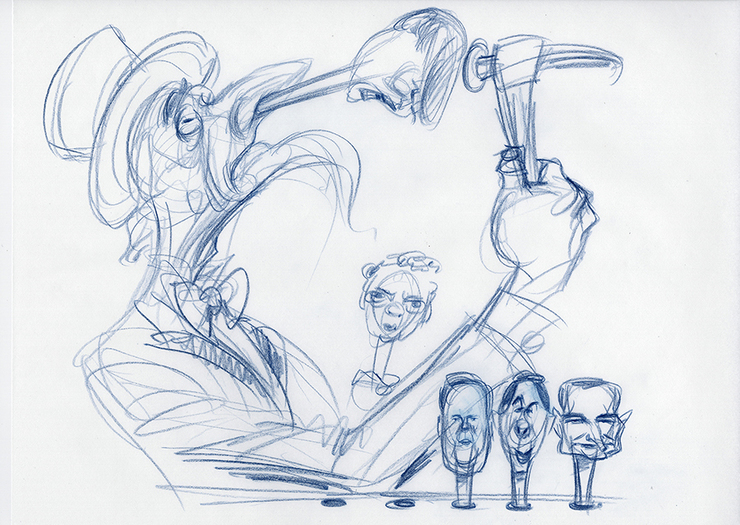 I love the iconic photo of the carnival performer who drove nails into his head through his nostrils. I saw Uncle Sam in a similar predicament. 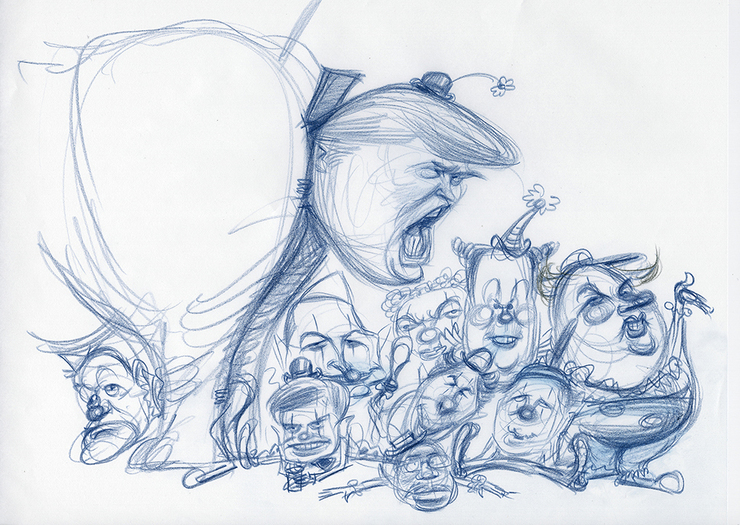 Nothing to add here except maybe I thought I could do better with Christie and redraw based on his poor decision baseball uniform photos. 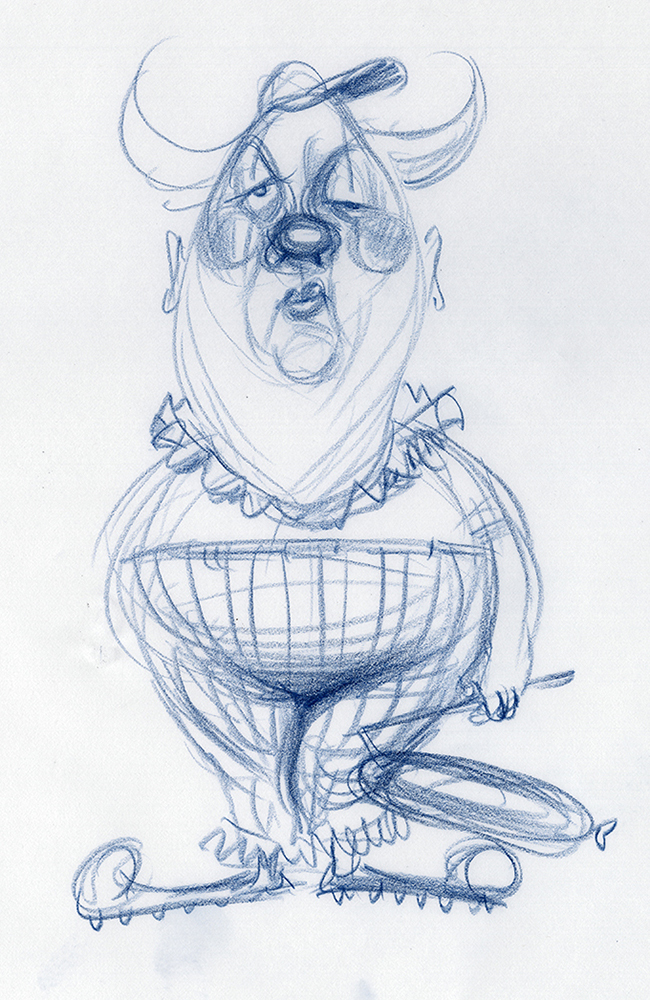 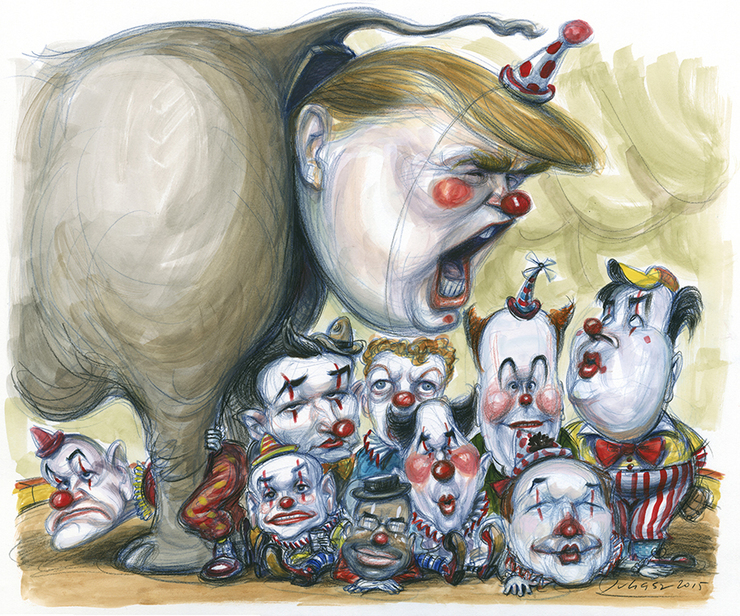