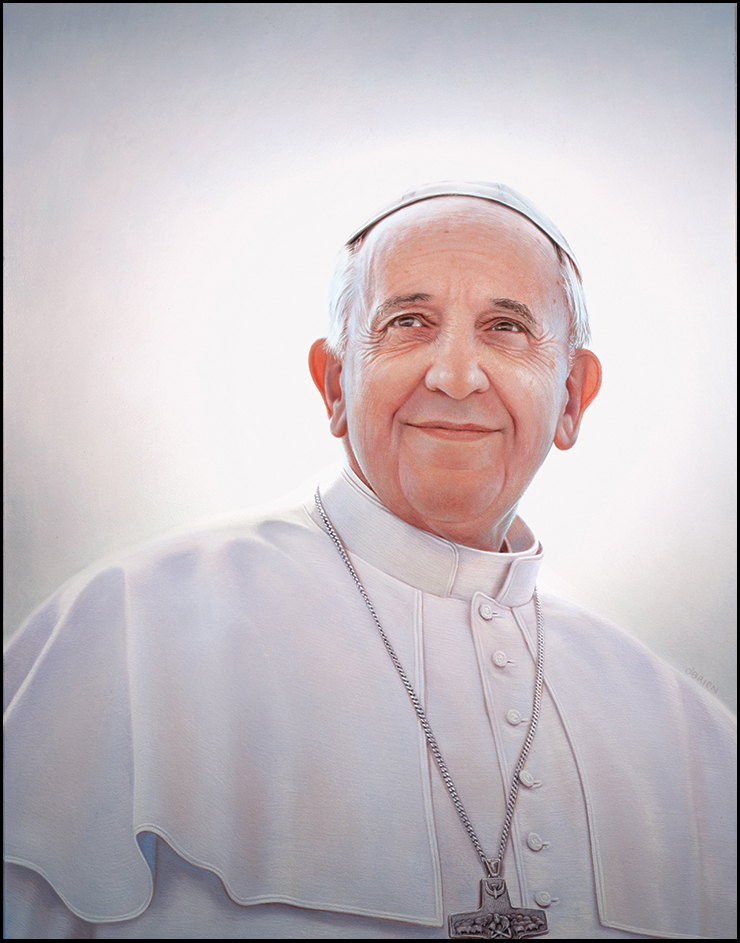 At the end of 2013, a tumultuous year for me, I received a call from my good friends at Time Magazine asking if I would take on a portrait of Pope Francis for a possible Person of the Year cover.  In the 20+ years I’ve worked for Time, I have done many Person of the Year covers.  Just being asked is confirmation enough that I am appreciated and that I can end my year on a high.

Any assignment that is just a portrait is not as easy as it seems.  You’re competing with excellent photography, other illustrators and with the reference you’re provided.  I’ve done enough covers for Time to know that as long as I am proud of what I painted, whether or not it runs matters a bit less.

I was raised a Catholic and like so many, have become a former Catholic.  The church adhered to a strict conservative trajectory and in recent years has had to navigate the terrible waters of priest misconduct.  What the church desperately needed was a new Pope who reminded his flock what true charity and Christianity should mean.  With Pope Francis, gone was the Pope-mobile, gone were the golden slippers, the sequin capes and tall hats.  This pope would wear simple shoes, garments just white and maintain his close connection to the people, especially those less fortunate.  He has asked Catholics to worry less about gay marriage, abortion and other hot button issues and instead focus on people, to open their hearts to their fellow man.  This pope is almost universally praised as a man of the people, going out at night to comfort the afflicted and lead by example.
This is what I had in mind when doing my painting.  I wanted to show his warmth and humanity.

Reference gets you VERY close, so for me to go on and on about what I brought to the table is only a part of the story.  But the reference is/was clinical, meaning, it was vital but was not the kind of image you would put in the cover.
This pope is NOT George Clooney, but he does have a beautiful, warm smile and sensitive eyes.   I wanted to bring a vibrancy to his face and skin and place it him in a majestic setting; in essence, a mere mortal with a heart.
In the end Time went with another cover.  I so respect Time that I do not want to agree to any comments about them making the right or wrong decision unless my mother chimes in.
Was I disappointed?  Well yes, but I moved past that quickly.  I've been lucky enough in the past.  The portrait of Pope Francis was my last of 2013 and the silver lining in getting the job and yes, not having it run, was that I was able to fulfill my hopes for the piece and set myself up for a great 2014. 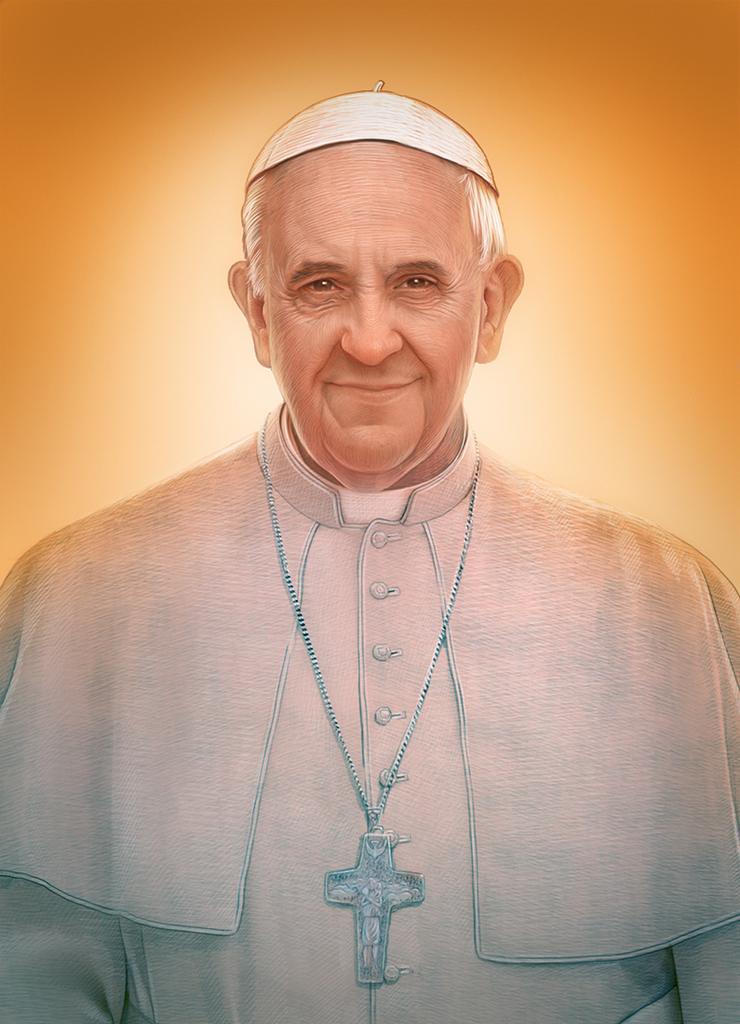 I did many sketches of many poses. OF the ones I care to share is this one, which is golden in hue. The initial conversation about what I would do was centered around me doing a golden painting. I knew this one was a contender. 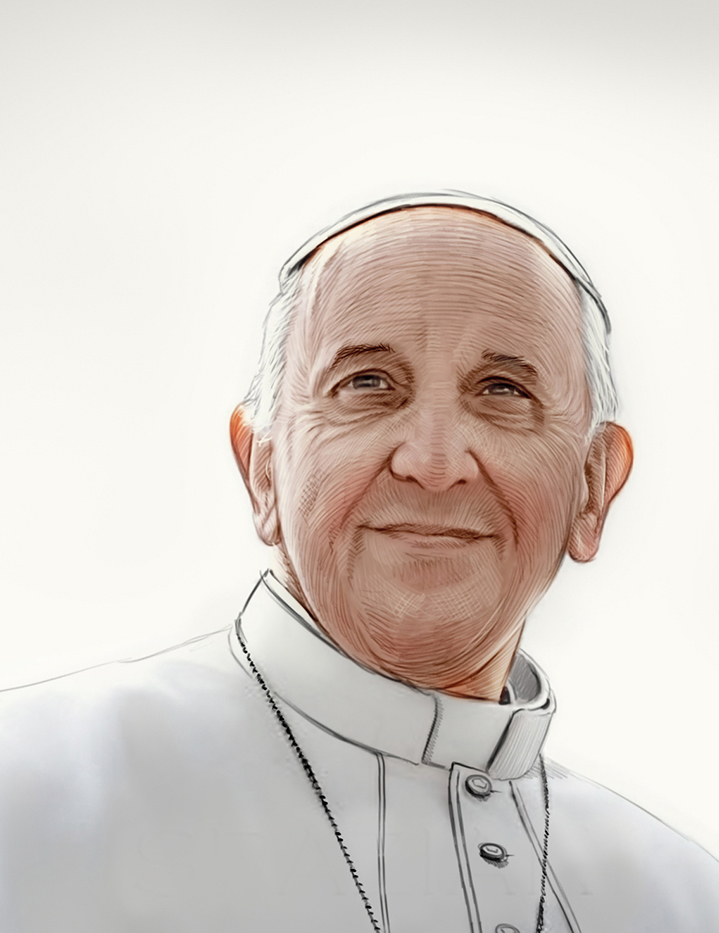 After I was finished with the sketches that D.W. Pine requested, I wanted to try something else. The calulation was that they probably were going to have something with a lighter background and how would one of these poses look on white. One of my secondary choices served as a good basis for a white sketch. I added this one and felt really good about it. When it was chosen I wasn't surprised. I pulled back more for more options in the end, something you have to consider when attempting one of these. 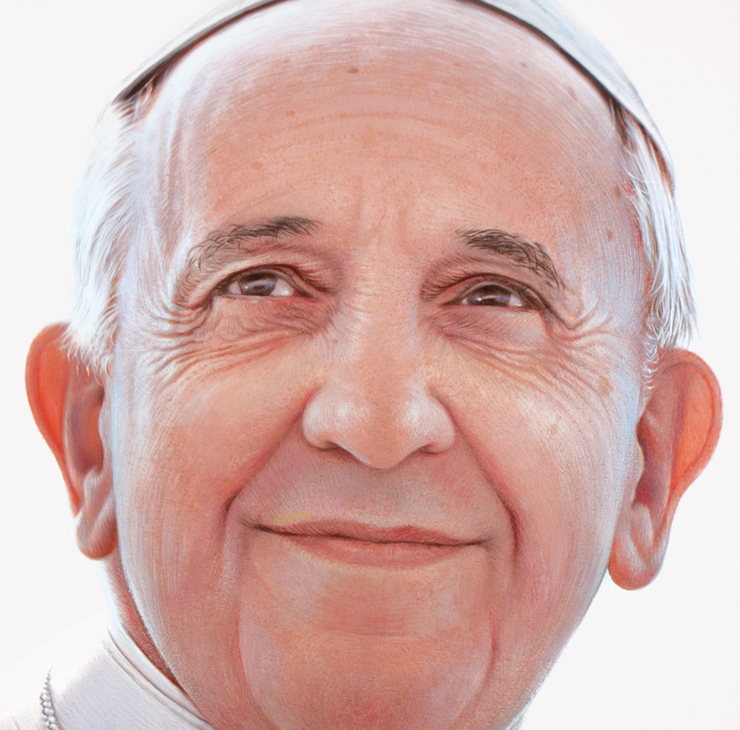 Close up of the painting. I tried to make the skin seem fresh and human. He tends to have dark areas around his eyes and small eyes at times. By adjusting the value and color, all the information is still there but not as dark and sallow.
Latest
Napoleon for Smithsonian If Animals were like Humans Michael Brown for Esquire Je Suis Charlie The Boat Duck/Rabbit Illusion for Nautilus Arcadia Contemporary Soho Putin for the Wall Street Journal Adam Silver for Sports Illustrated The God Project for Stanford Magazine
Topics
Topics
Procrastinations
Archive
Image Galleries
Stuff I Do Photographs and Nonsense
© 2022 Tim O'Brien