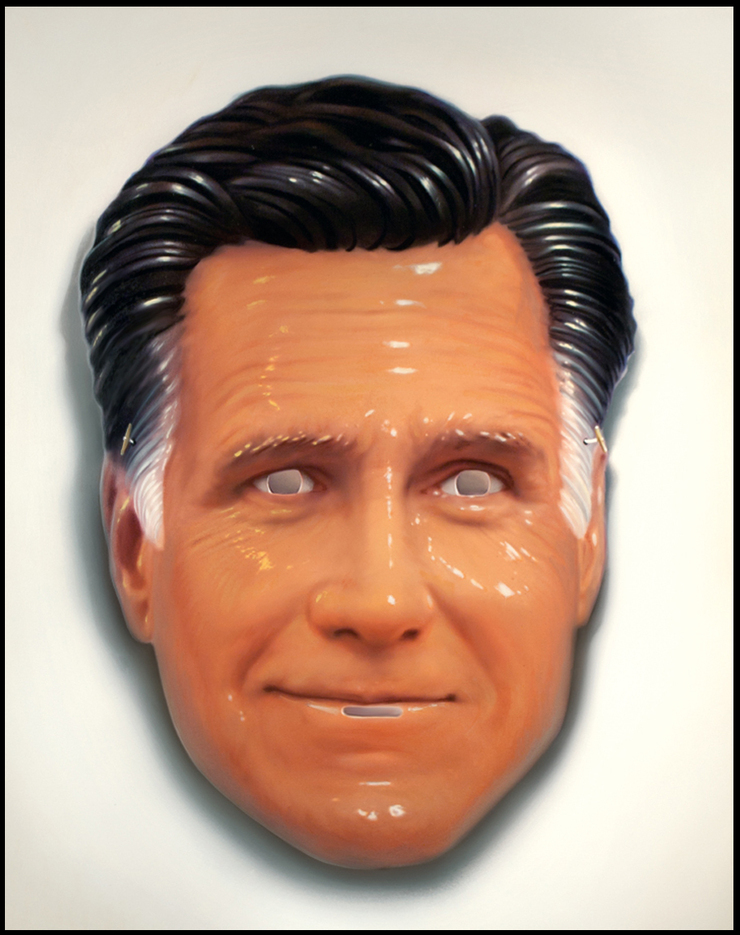 Who is Mitt Romney?   The answer to that question depends when you asked it.  If you ask that when Romney was running for the senate against Senator Ted Kennedy, you might believe one thing.  If you listened during the primaries while Romney move WAY over to the right you would believe another thing.  The truth is really hard to know.  People are all afforded the right to be private and hard to pin down, but not someone wanting to be the president of the United States.
Recently I was asked by Chelsey Cardinal of GQ to paint Mitt Romney as a plastic mask.  On one side would be his plastic face, the other side or the page would be a second painting of the inside of the mask.
Perfect idea and I love the creative use of the physical magazine.  Playboy magazine in the 60's and 70's used illustration in really brave ways.  The paper was often specialized, die cut and fold out.  Varied styles and bold ideas.  If magazine illustration is to stand out, perhaps a similar use of the physical space should be considered more often.  GQ was smart with this one.
When I was called, I first did the sketch and contacted them with a 'yes' and that I already have a sketch.  If they liked it perfect, if not, I would have to think if I was going to be able to pull it off.  Sometimes I need to do a sketch before saying I'll do a job to see if the idea would work.  This one did.
After doing the front cover, I had to tackle the interior.  That proved much more difficult.  When you look and a convex mask  interior, your eye perceives it going IN.  When you close one eye you lose that sense of depth and your eye is fooled to believe the nose pops OUT at  you.  Photographing this is the same.  So, to pull off the interior trick I had to put some hard edges at the bottom of the nose and light it the right way plus use the string to make the viewer believe they are seeing the inside of a mask.

Is there anything behind the mask?  If he and his campaign have their way, you won't know.  Release those tax returns Mitt, your father did. 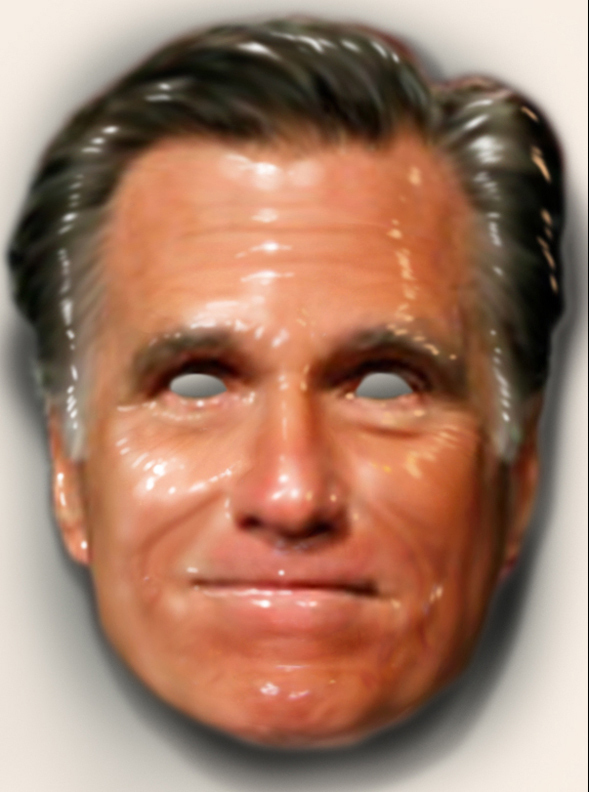 My sketch to show me if I could do this piece. IT was approved. 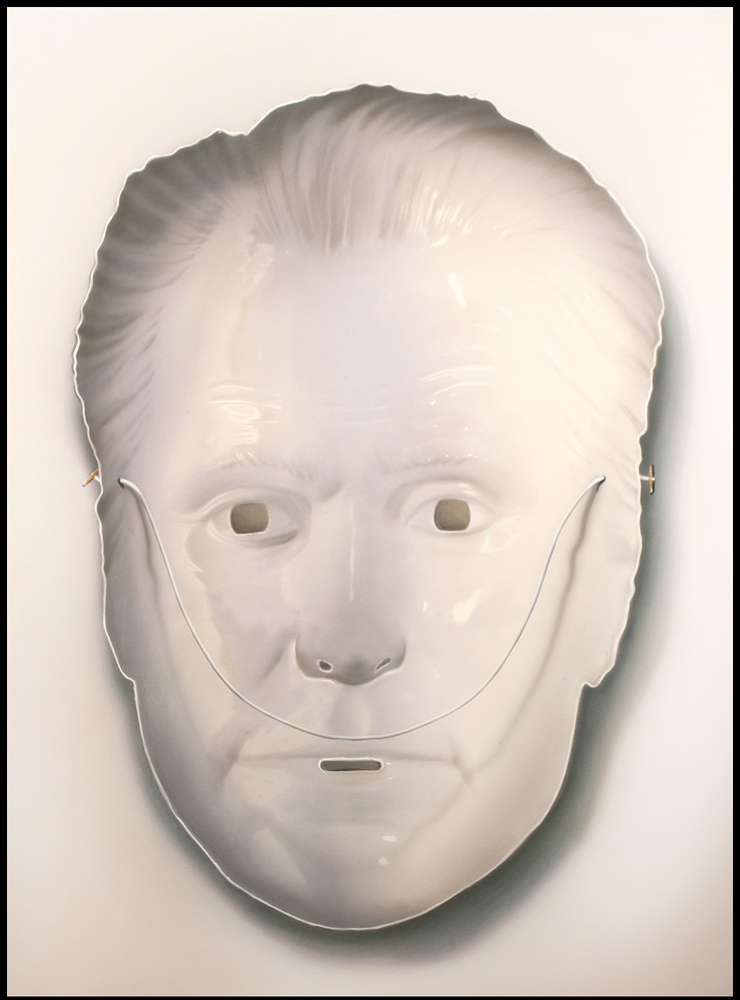 The inside of the mask. To show it went IN and not out, I added a highlight to the bottom of his nose and used the shadow on the string to go IN. 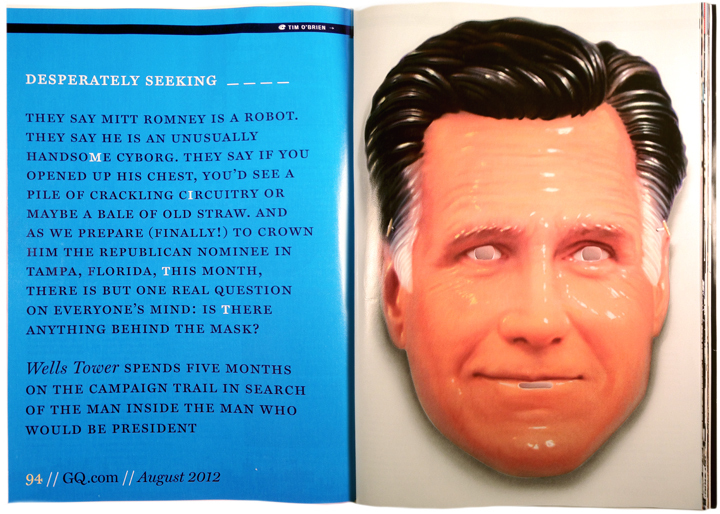 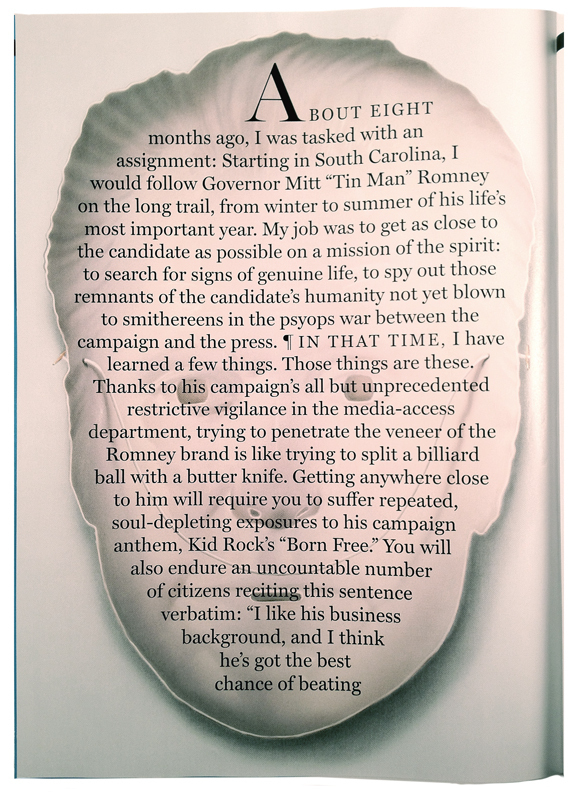 The flip side of the Romney mask. If I knew type would cover all my work I would have had trouble working so hard to make it work out so well. Thank goodness for my Drawger blog when I can show my mask without the type. Still, I like the type in that space...it works well.


I thought I would add a thought to this article about the use of illustration in 2008's presidential campaign versus 2012.  There was an amazing dynamic in 2008, with Hillary Clinton going head to head with Barack Obama.  Add in John Edwards and then all of the Republican presidential candidates and then toss in Sarah Palin?  It begs for illustration.
Illustration is great for digging in deeper to finding who candidates are.  When they start to stake out positions and get covered in depth, the analysis allows for the use of illustration.  We will see if we start to see more Romney illustrations coming soon.  Obama is always a great photo op and it's not easy to find an angle on him to illustrate.  Romney seems perfect for some in depth illustration work.