OCTOBER 28, 2013
With Tosca opening this past weekend, I am honored and privileged to present, after nearly a year under wraps, my paintings for the Vancouver Opera. The operas are Tosca, Albert Herring, Don Giovanni and Don Carlo. I would like to thank Doug Tuck and especially designer Annie Mack for making this experience exciting and wonderful.

I didn't know much about the opera so I had to take a crash course on it as well as study the performances that I was going to work on. After hours of watching DVD's they sent me and getting schooled on the history from Doug, I dove into the project with a newfound respect and excitement for the artform.

To create a single image from seeing such intense operas is quite daunting. Trying to encapsulate the mood and the subject matter in one image from operas that provide unlimited visuals isn't very easy. I am grateful that Doug and Annie were there to talk out the possibilities of each image and pare it down to one solid piece of art that hits the heart of the piece. It was a wonderfully collaborative effort. 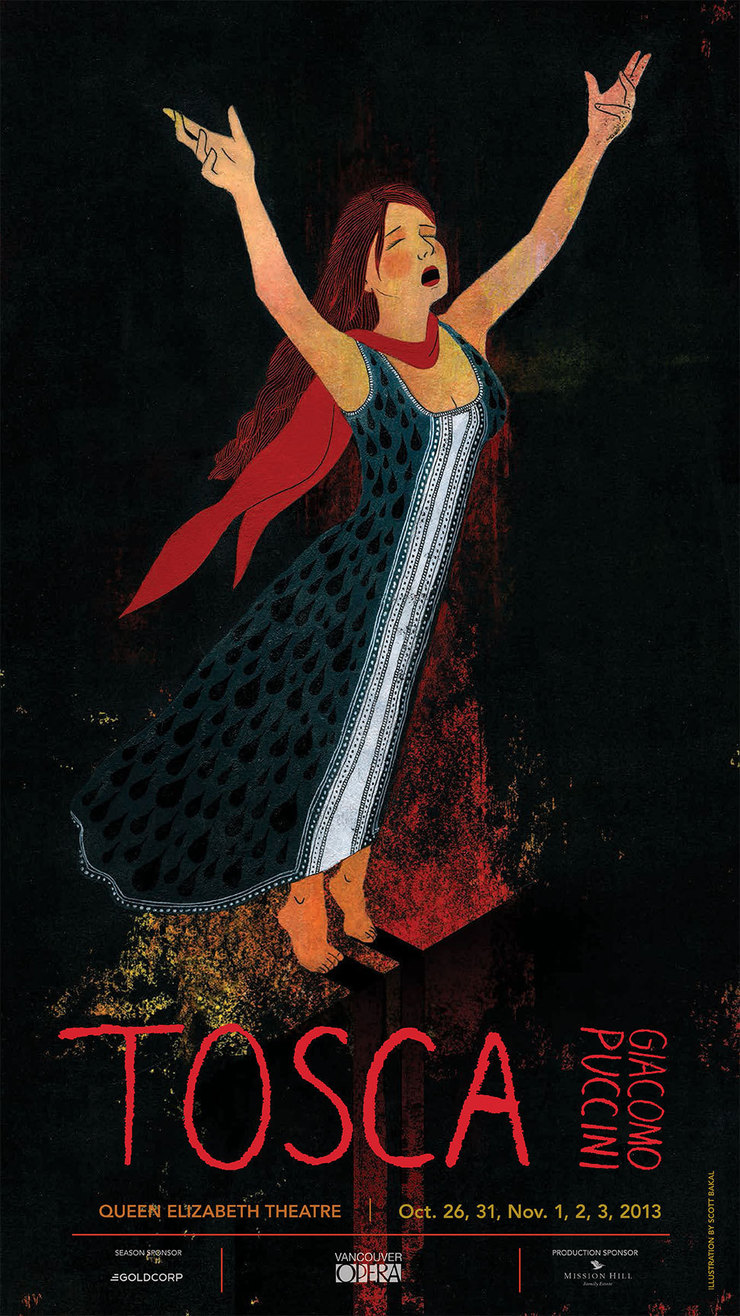 A couple of months ago, there was an added angle to this project when the Vancouver Opera decided to create TV spots for Tosca and Don Giovanni. An animation studio in Vancouver, Giant Ant, did an absolutely stellar job taking my original painting for Tosca from the files I provided them to create a powerful 15 second spot that blew my mind. Don Giovanni will begin production in a few months. 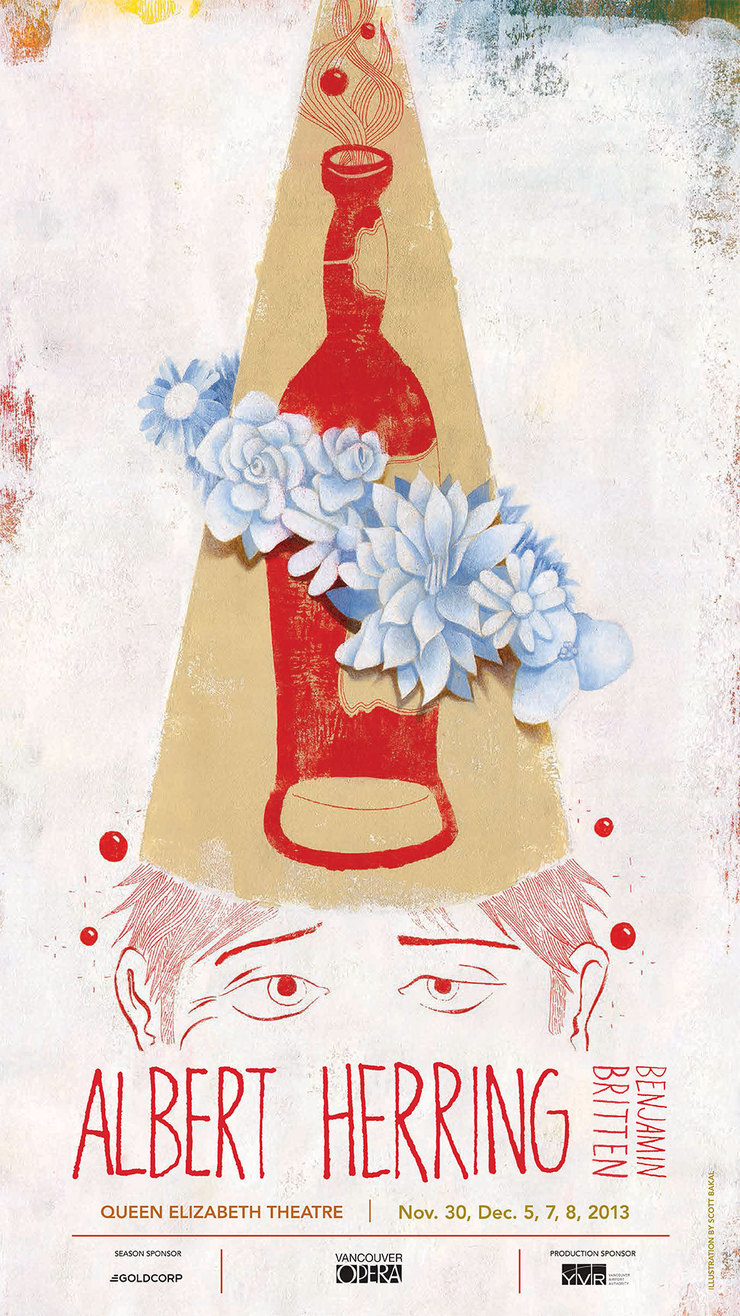 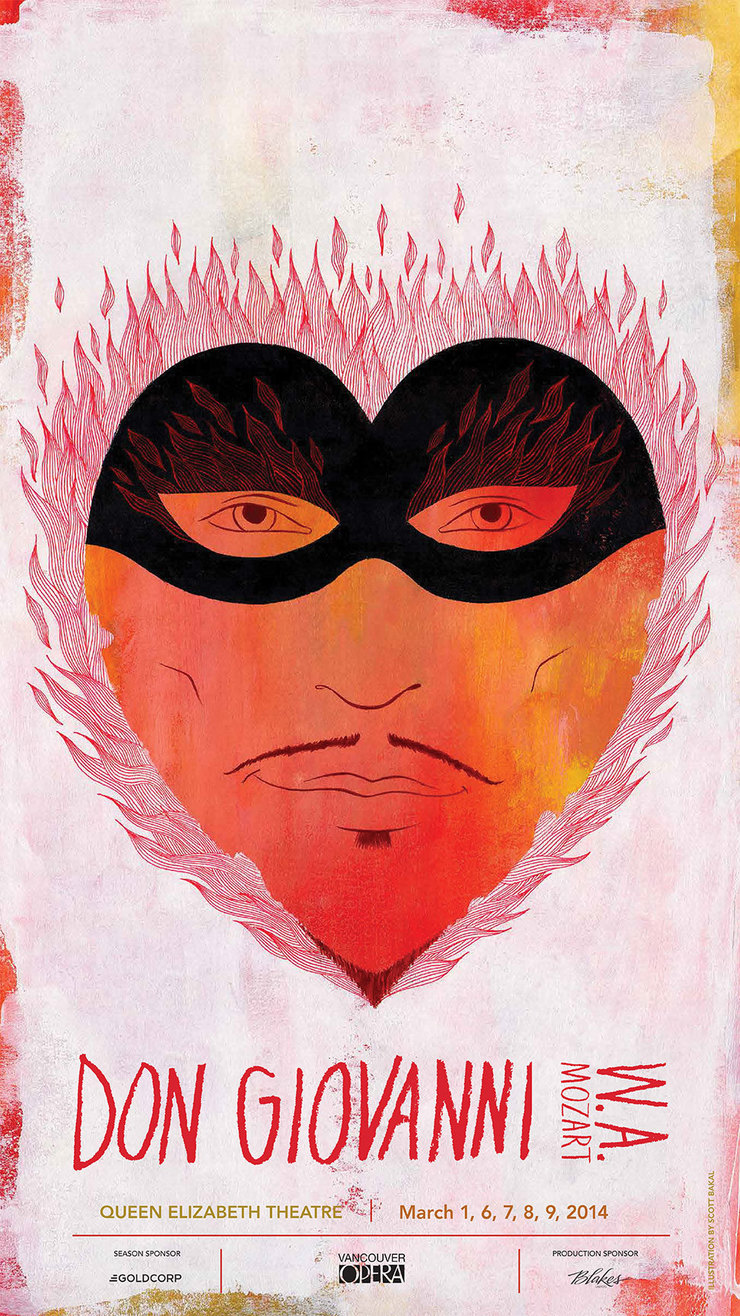 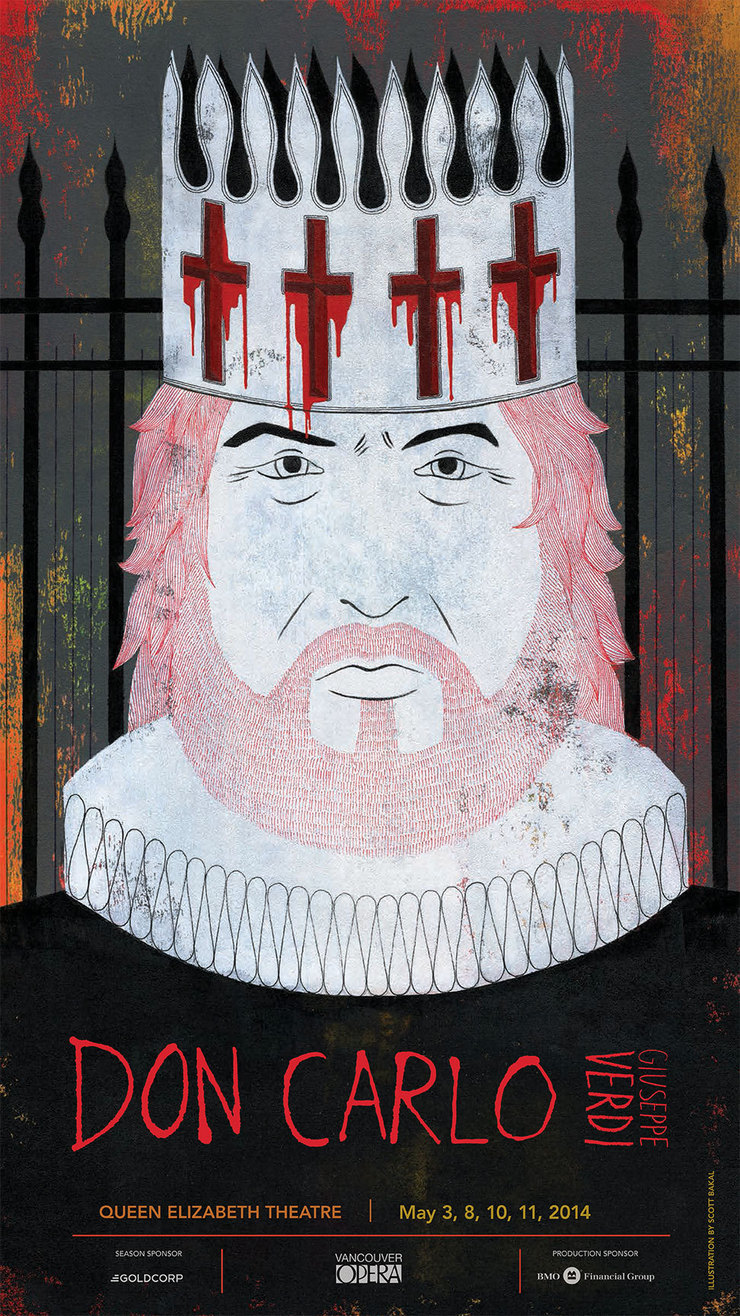 Below are a fraction of the sketches I did for the project. These were the one's that I sent the client.

As you can see, Tosca and Don Carlo were the pieces that we went back and forth a couple of times discussing exactly what they were looking for. I think they felt those two performances were the most important because Tosca is a powerful opera that opens the season and Don Carlo is an elaborate production that the Vancouver Opera hasn't put on in 30+ years. The Albert Herring and Don Giovanni work, they felt I got it right in the first round and selected from these initial sketches.

One of things Annie wanted to do which is different than past posters is include the text right on the art with the art being a separate entity. In the past, the art was either completely separate from the text or composed with the text as part of the art. I initially didn't feel too good about that as I want to compose the art in its proper space and let the designer work out how to deal with text. In this case, there needed to be monstrous space in the art to accommodate the type.

I decided that if this was the case, then I wanted to do the lettering along with it. Annie was excited about that and let me have free reign with the type and listened to some suggestions. You can see in these sketches that I was thinking about the text as I was composing some of the ideas. I was getting a feel for the type of lettering I wanted to do.

Originally, I wanted the text to be a sort of script. Annie and I deduced that we needed to make sure it was legible and we were worried that script would be too problematic so I went with a print-style version. I do wish some of these layouts came to fruition though. The center sketch wth the two eyes in the top row I thought could have been interesting.

Here is a selection of finished drawings that I used for the paintings and a sort of color treatment and layout option for Don Carlo that ended up being a direction that the rest of the posters ended up being designed.

All pretty much stayed the same except for Albert Herring. About a week ago when Annie was finishing up the layouts for the posters which were only just finalized (nearly a year after these sketches), Annie realized that Herring wasn't going to work. So I did some of my digital magic to pull the head and hat off the art and recreate the background to make room for the lettering and information. 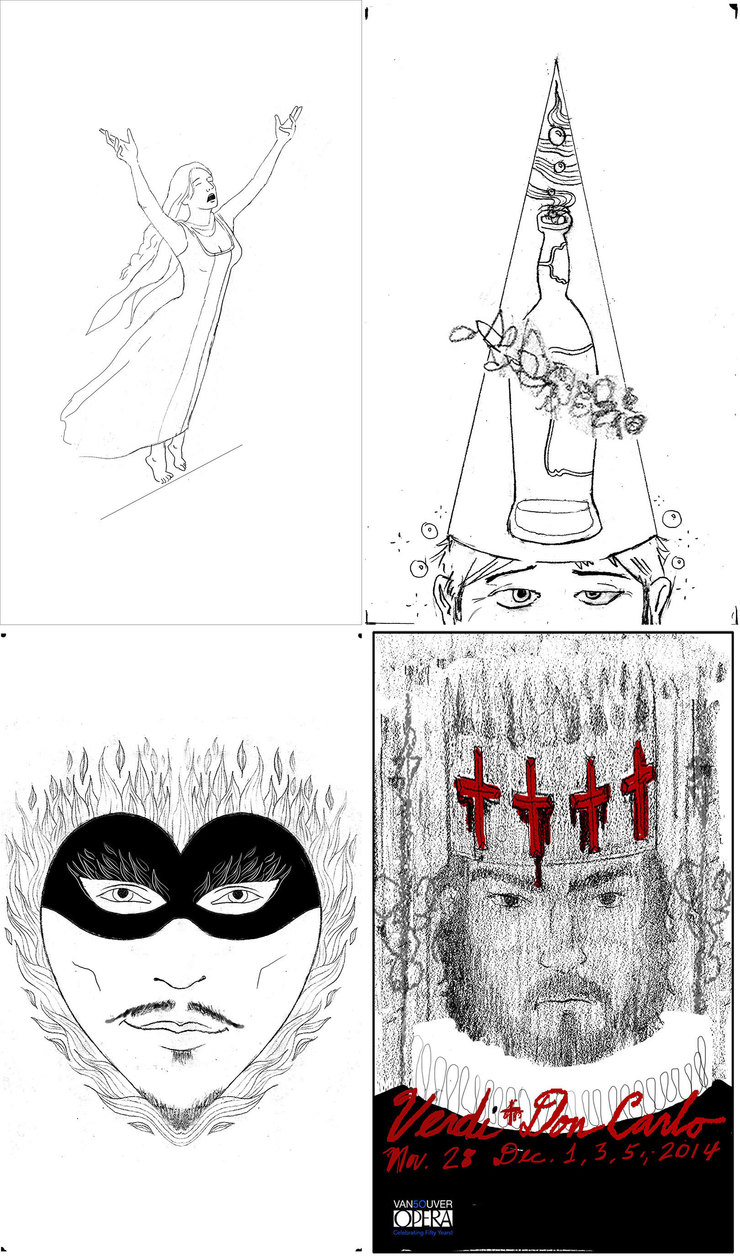 Here is the collection of final posters with the final type. I don't think there is too much of a need to show all the lettering studies. In a nutshell, I used pencil, charcoal, ink, ink stopper, chopstick and other 'pens' to write the titles over and over...and over again. When I found two or three for each opera that I felt best convey the opera but that could work collectively together as part of a series, I sent selections to Annie to choose from.

I am extremely pleased with this series and speechless of the honor to be able to create work for the Vancouver Opera. I've already been getting nice notes from folks up in Vancouver who have seen the Tosca posters and advertisements. Good luck to the opera and the new season and thank you again Doug Tuck and Annie Mack for your trust, wisdom and the wonderful experience. 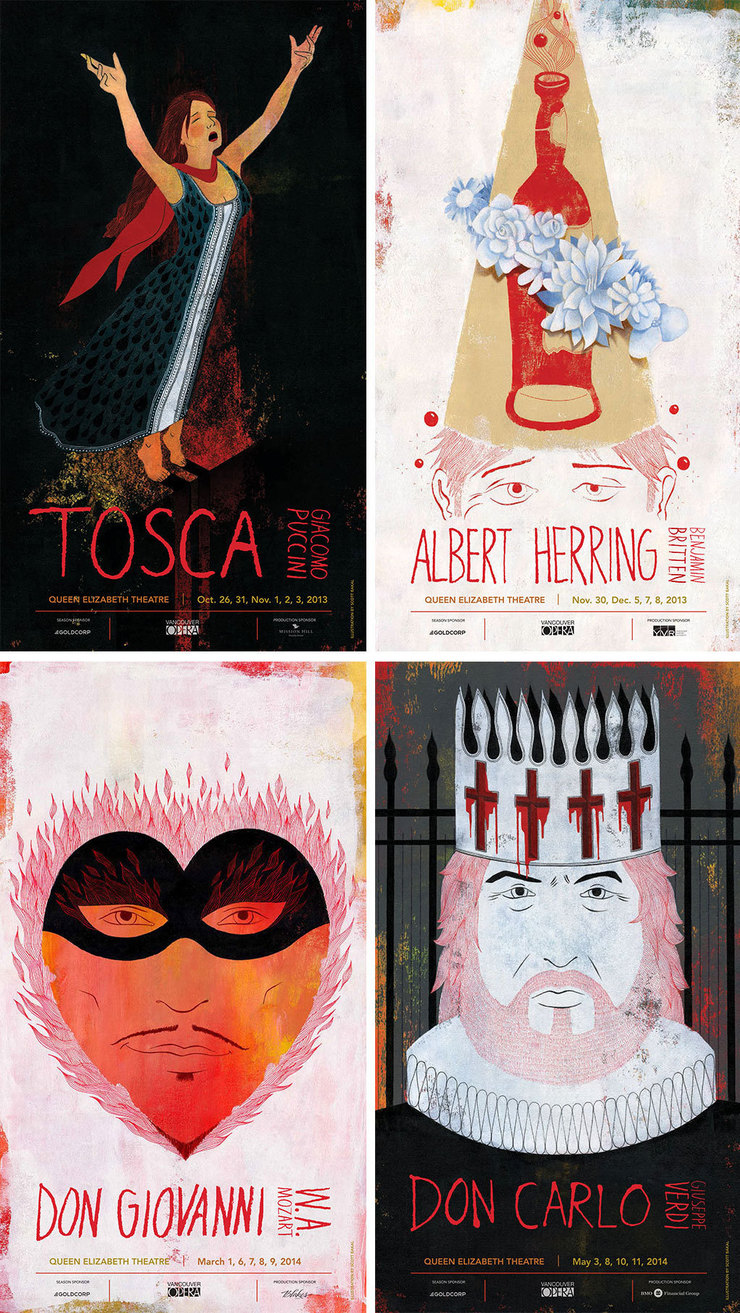