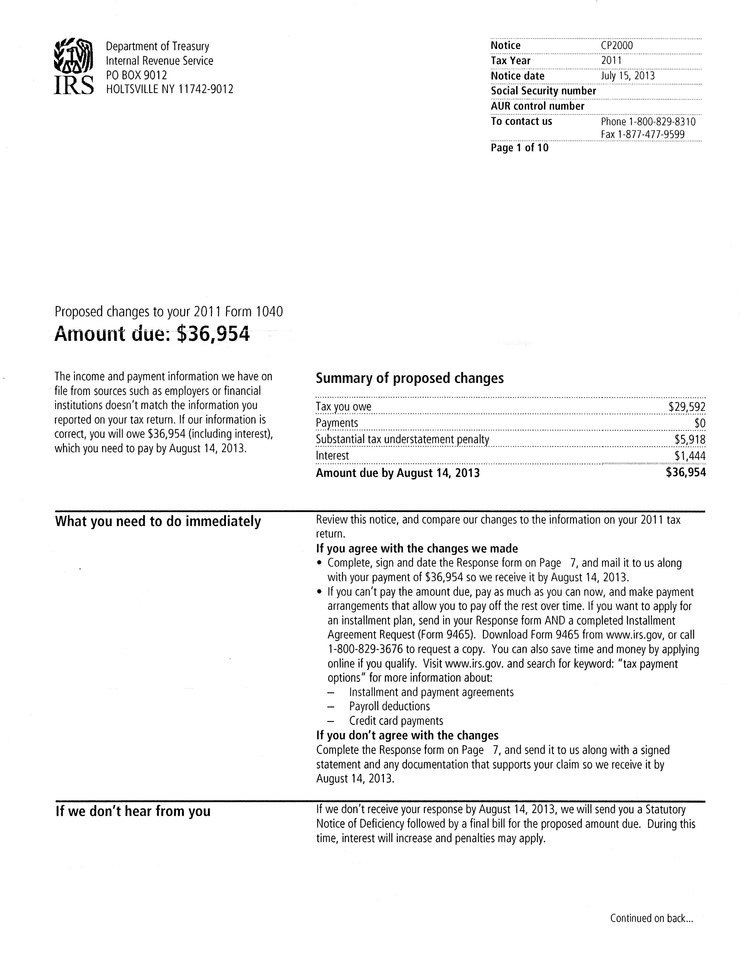 I received this letter a few weeks ago. Having a minor heart event and scraping myself up off the pavement after blacking out, I tried to wrap my head around what went wrong. I owe the IRS $36K? Holy shit.

Fortunately, I am happy to report that this particular issue ended up being the IRS forgetting to put a decimal point in a number from one of the 1099's that was reported. A DECIMAL POINT caused this!

Once I discovered what the issue actually was and got the documentation, including having to bug the client to write a letter stating that they correctly reported the income, things were a bit easier in my mind - and my heart-rate dropped back to normal.

A backstory - about 6-7 years ago, I was audited by the IRS. It was a nightmare for a while and all the worst case senarios flew through my mind but in the end, I learned a lot from the experience.

Why I was audited was through a series of financial reporting and new tax write-off's that were fairly high at the time and the 'red flag' was that I wrote off transportation expenses on two different parts of the tax return for two different types of write-offs. They wanted to make sure that I wasn't double dipping. Of course, in their letter, while they were auditing me, they also included a laundry list of specific write-off's that I needed to justify while I was in the office including things like advertising and promotional expenses among others.

I've always been pretty organized but as it turned out, the audit was for two years earlier - just like the recent letter I just got. Expect that, by the way. If you're going to get audited, it'll most likely be for about two years earlier. My issue was that it happened to be the year that my receipts were sort of disheveled and essentially unorganized in a shoebox. Usually, I properly file everything but I started using new software but screwed it up and some life events at the time put organizing this stuff on the back-burner. More like, behind the stove.

What calmed me down was when my tax guy asked me a simple question:

"The numbers you give me...they're real, right?"
"Yes."
"Then you have nothing to worry about. Just find those numbers and give them what they are looking for...and that'll be that."

Of course, again, that year I was hoping to find every receipt I claimed. I wasn't so sure I had them because I trusted the print out. The search for paper over a period of a month began.

Skipping ahead a bit and to give you an idea of what the meeting was like: The IRS woman was very stern and professional - and very intimidating. Everything was 'Mr. Bakal' and 'Hello, I am Mrs. So-And-So" - she made me feel guilty for the simple fact I was called in. I wonder if they are trained to do that?

She asked about - and we discussed at great length - what I did as a business so she had an idea of why things are being written off. Questions like "Why do you buy paint?" were the sort of thing that was questioned.

After about a half hour, she became very relaxed and more pleasant. Most likely realizing that I wasn't trying to 'put one over' or invent expenses. I guess the fear tactic is her M.O. In the end, according to her, she was surprised I was even called in. Most people 'leave her office owing $40,000 or more'. Jaw dropped.

There was a bit of irregularity in my tax return because of where my write-off for the rent of my studio was and I ended up owing only a couple of hundred dollars. Darn.

I asked if my tax guy did anything wrong with that - she said 'no'. She reassured 'he actually did a great job and there is nothing really wrong, it's just he knows the loopholes and in this case, the studio rent number and where it was filled in doesn't work for your taxes  for THIS particular year.

With the audit and the recent letter from the IRS, I thought it would be helpful, especially to students and new rising illustrators starting up, to have a short list of things that may be able to help keep yourself organized with bookkeeping. It would be pretty difficult to have all the details listed here but having some common sense items can get people started with good habits. I will skip over LLC's and the more involved parts of running a business and I hope that my buds here at Drawger and from the outside can help add to the information and discussion that may come up.

Since we are sole-proprietors and have interesting write-offs, we are very ripe to be audited. I was audited because I went back to school for my Master's Degree and the new numbers and papers raised the red flag. So it is imperative that you get into the habit of staying organized and understanding your finances.

1. Get a good accountant

I've had my accountant before I graduated from the School of Visual Arts - probably around '91 or '92. It was from a family recommendation. He was not an 'artist accountant' as some folks have. We both grew together learning the business. He knew how to deal with sole-proprietors but I had to help him understand the business of an illustrator as I gained more experience. And now after 20 years, we have a great symbiotic relationship dealing with taxes or related issues.

This is a must. Be sure you are separating business and personal income and expenses. You can simply start with two separate checking and savings accounts and go from there. Do this with credit cards also. This makes paperwork and tracking information much easier and doesn't cloud where money is coming or going.

I started in the era of paper and it took a while for me to switch to digital/paper which was 2003. Up until a few months ago, I was using Microsoft Money 2003. I've recently switched to a Mac system so I bought iBank to replace Money. It generally works the same. With this software, you can create categories for your income and expenses which really helps with understanding where your money is coming and going and helps with budgeting.

Many people have started using Mint.com to help organize their income and expenditures. It's done online and it seems like an interesting alternative. I might have tried it out if I knew about it before I bought iBank. if anyone using Mint.com out there would like to comment on it pro and/or con in the 'comments' section, please do.

Receipts, online purchases, credit card purchases and statements, internet costs, etc. If you are going to put a number down on your tax form, you should have a real number on a piece of paper backing it up.

This is where your organization and bookkeeping system will come in handy and help build up a habit of weekly 'bookkeeping' work. Admittedly, sometimes it's monthly for me. Mostly because I have my system so down to a science. I can usually get through filing bills, receipts and verifying my checking accounts in about an hour or so.

I also recommend keeping a paper-trail along side digital rather than just all digital. It might be a little extra work, but in the experiences I've had, it really has helped having paper files to show the IRS. Don't throw out those 1099's, receipts or bank statements.

With those basics, here is a simple flow of paperwork and activities that I do here to keep my financials organized in a way that makes sense to me and that if I ever have to go throught an audit or receive a letter like the one above again, I can quickly and easily find exactly what I need.

This system might not work for you but hopefully get you thinking about how you can create a system for yourself. 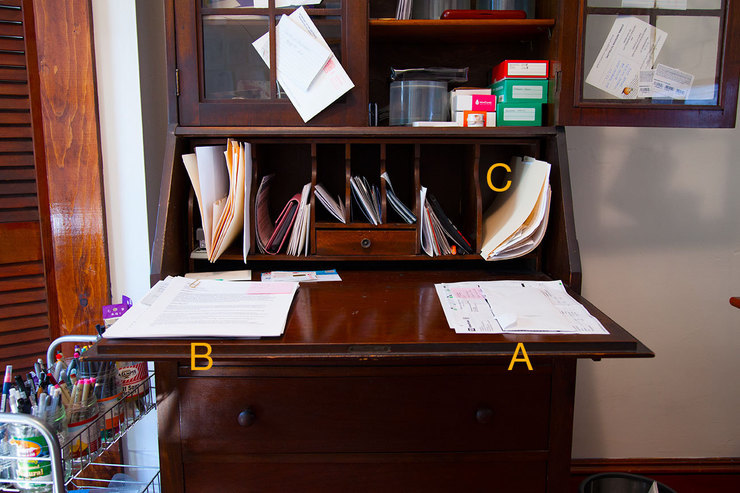 I have it organized in a way that I know where everything is and I know at what step each transaction is at. What I want at the end of the week is a clear desk.

'A' - These are the checks and bills that accumulate during the week that have to be entered into the Business or Personal folders 'C' and into the computer - or if its a utility or personal file like car insurance, it goes on the 'B' pile into another file box (not pictured).

The image below are the two 'C' receipt folders. One contains personal receipts and the other is all the business related stuff - receipts, print outs, check stubs, etc.

Below the picture of the file folders are what the inside of the folders look like. You can see how the receipts and papers are paper clipped and are organized by category writen on the top right. 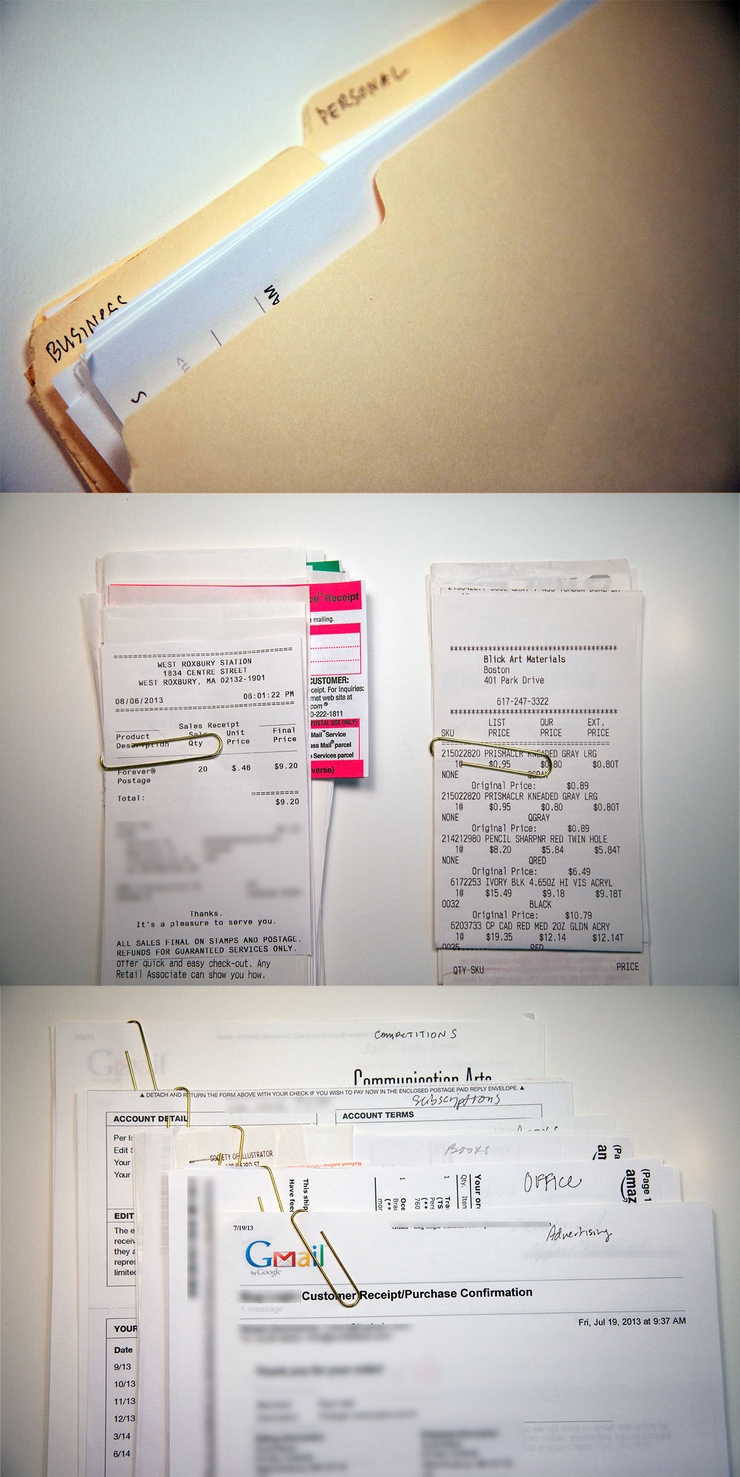 I swear, I keep paperclip companies in business.

I had created a category and subcategory list years ago that define where each piece of paper goes. I created these categories in the software as well.

For example: I created a SHIPPING category. The subcategories are FEDEX, UPS and USPS. With this, I know how much is spent on each service and then know my total for anything shipped. I do this with all major categories and create sub-categories depending upon the services within it.

During the year, I organize these papers so when tax-time comes, all I need to do is print out my bank and credit card statements and start adding up the totals. It looks like a mess in the photo below - but really, it is very organized. 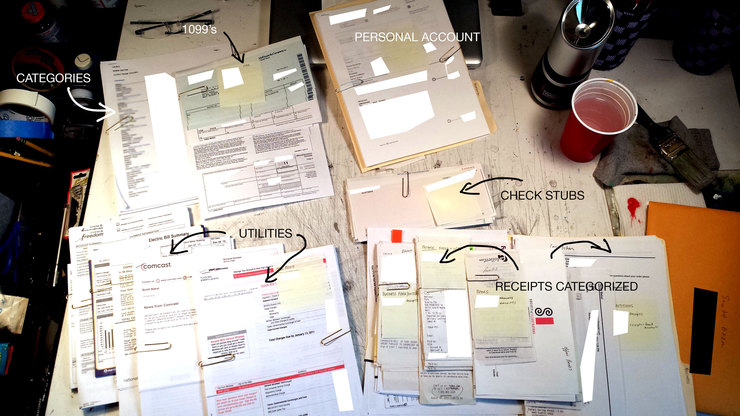 Using the Post-It notes you can see in the picture, I put the totals on each of the paperclipped categories and match them to my categorized print out from my accounting software (upper left marked Categories). This sheet, with all the final numbers is given to my tax accountant. 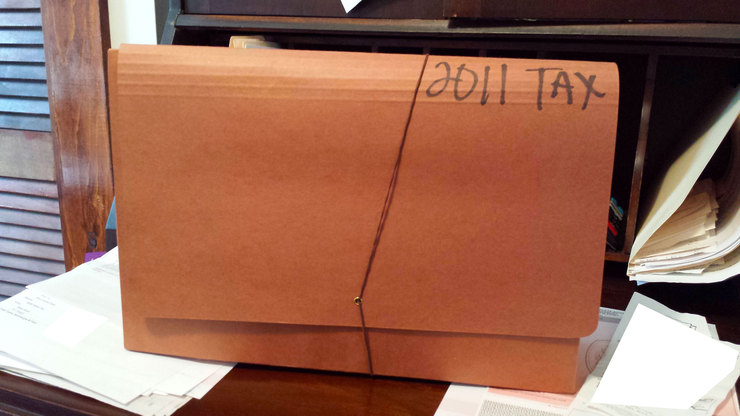 Then it all finds its way into one of these folders. They are in storage and I keep about 10 years worth. At the 6-7 year mark, I generally shred all the receipts and documentation and just keep the tax forms themselves up to the 10 year mark. There is no reason to keep anything longer than that.

That is the basic bookkeeping system that I've been doing for the last 20 years. The audit really helped and taught me to get tighter with my paperwork and reporting. When I got the $36,954 bill, it took less than an hour to locate every bit of information for the error. This included the original 1099, the pay stub, the deposit amount to my bank, my original invoice and even the original email from 2 years ago for the job stating the fee structure and agreement. Within a week, I had a letter from the client stating that our reporting was correct and the IRS made the error. (That felt good to say!)

It's all a little extra work during the process but it'll save you a lot of unneeded stress.

I hope this helps some folks out.