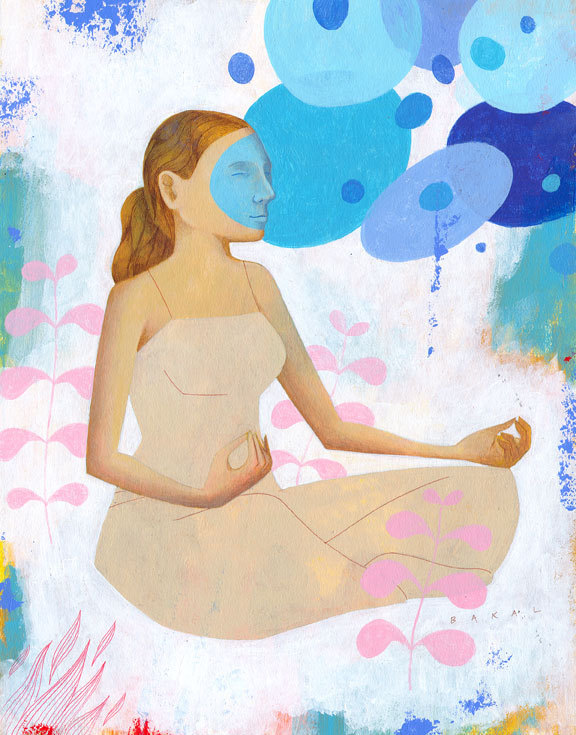 Full page opener.
In the beginning of March, one of my illustration dreams came true:  To do a project with Yoga Journal.  I've always respected the magazine because of how much illustration they use and the artists they choose.  I respect the magazine a lot more now that I've worked with Ali Zeigler because working with her was a dream.  I felt we were a team trying to get the best work done for this project.  It is also nice to work with an art director that is able to use some white space in their designs!  (See tearsheets below). 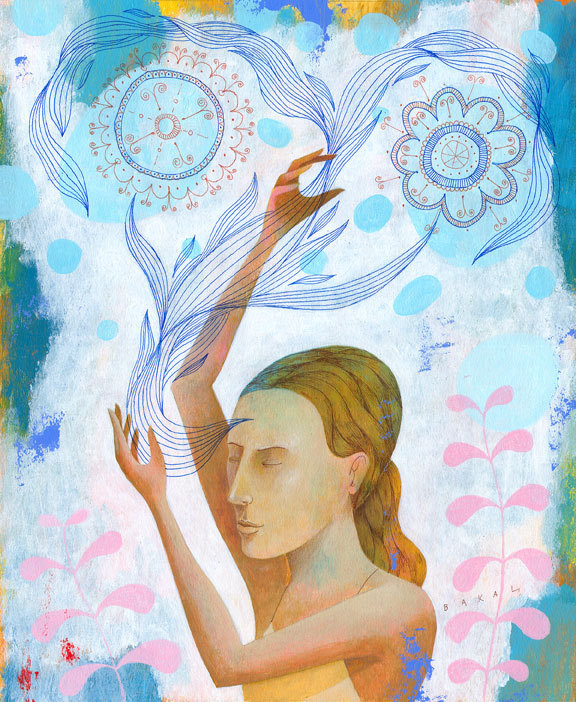 The topic was about meditation and how to control those outside thoughts from creeping in your brain and distracting yourself.  It takes a while to train yourself to push away all those day-to-day thoughts, lists and worries and just meditate in a calm state.

During the project, I thought about my experiences with mediating.  Years ago, I was taking martial arts classes, specifically Ju Jitsu.  I actually made Brown Belt 2nd degree but because of financial burdens on the family, I had to drop it so I never had attained Black Belt which was probably 6 months to a year away.  I still retain a lot of what I learned from it today...except maybe for the physical parts!  Under this Brie and Cracker/Guiness belly is a washboard stomach!  One of the things we used to do was meditate at some point every class and the techniques we learned still is with me today.

Not to get too deep into medication techniques, one way I've learned to ease myself into calmness is to visualize a white field...of paper if you will.  In the middle of the paper is a small dot.  I take long, deep breaths in and as I do so, I visualize the dot getting larger and larger until it fills the 'paper'.  As I exhale, the dot slowly returns to its original size.  So, I find myself able to just 'be' and not be surrounded by thoughts of things that distract me from calmness.  It's a simple technique but it gets the body (breathing) and the mind (visualizing) to do something very simple and lead your thoughts away from everything else. 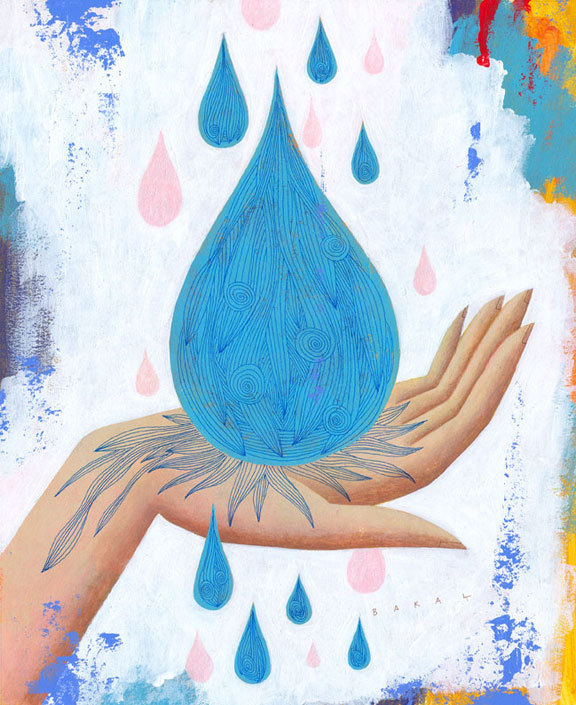 In April, a couple of weeks after I was done with the paintings, I was scheduled to do a couple of lectures at San Jose State University and the Academy of Art and made plans to hang with the West Coast Iller Set...Adam McCauley, Robert Hunt, Scary Joey and a couple of up and comers who were under the tutalege of Mr. Hunt.  I figured, while I was out there and Yoga Journal is headquartered out there, I'd make an appointment to have lunch/dinner/drinks or whatever else.  We made a lunch appointment and I got to hang with Ali and the other two art directors Ron Escobar and Charli Omett.

Before we went to some sweet little lunch/sandwich place around the corner, I went up to their offices and got to see the magazine all laid out on the wall.  They were all wonderfully nice and cool.

While we were out to lunch I had mentioned that I was going to hang out with a bunch of illustrators in the area.  All of them looked at me funny.  I said there is a pretty high concentration of illustrators in San Francisco and they were surprised to hear that.  They said that no one ever calls to have lunch.  I couldn't believe my ears!

The lesson here is, if there is a major magazine nearby, you may well want to try to contact them old school and not hope they stumble on your website.  I think asking art directors out to lunch/drinks whatever, especially after you've worked with them is a classy thing to do and help continue work coming in.  There's nothing wrong with the 'ole 3 martini lunch! 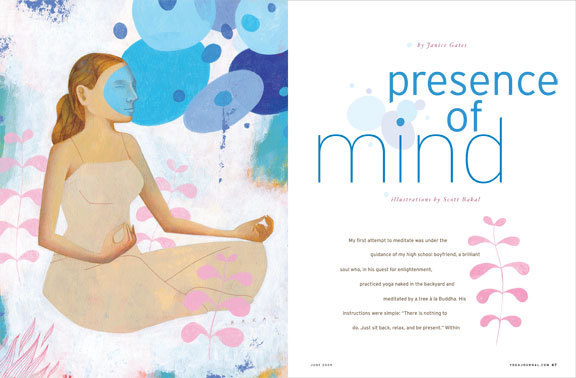 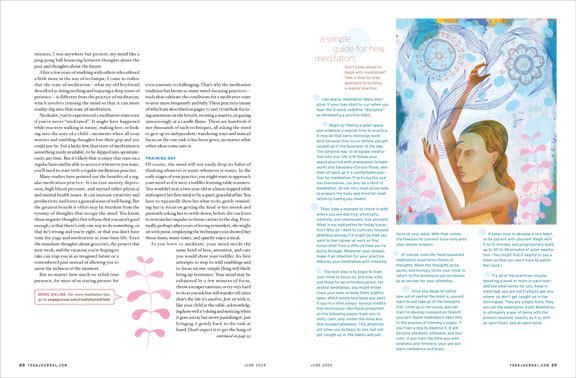 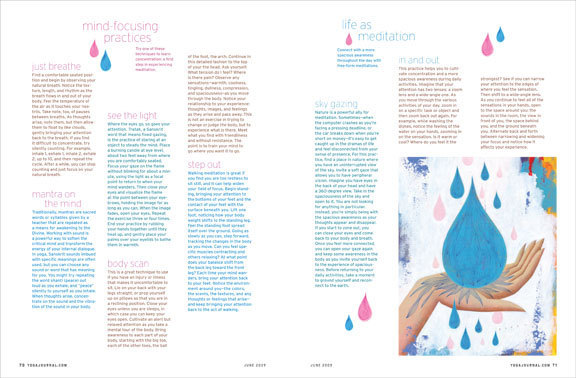 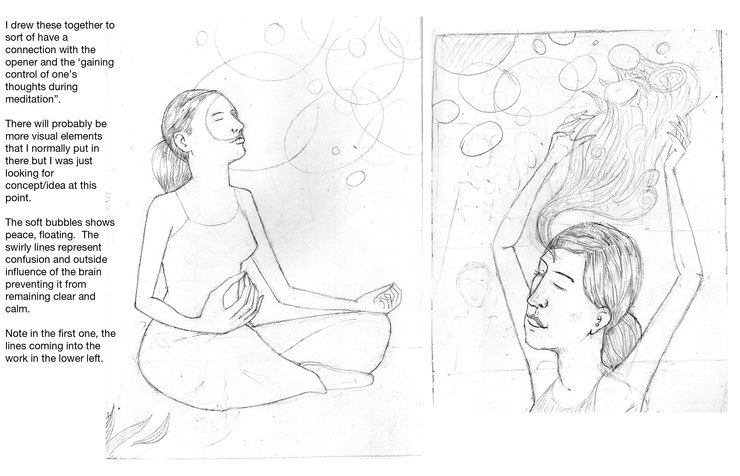 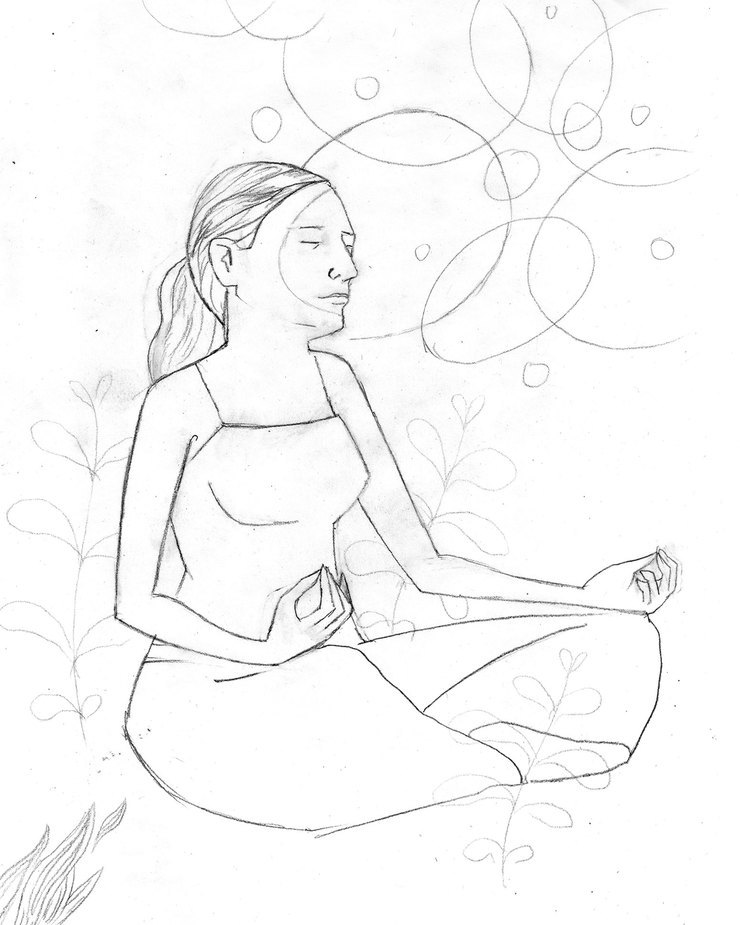 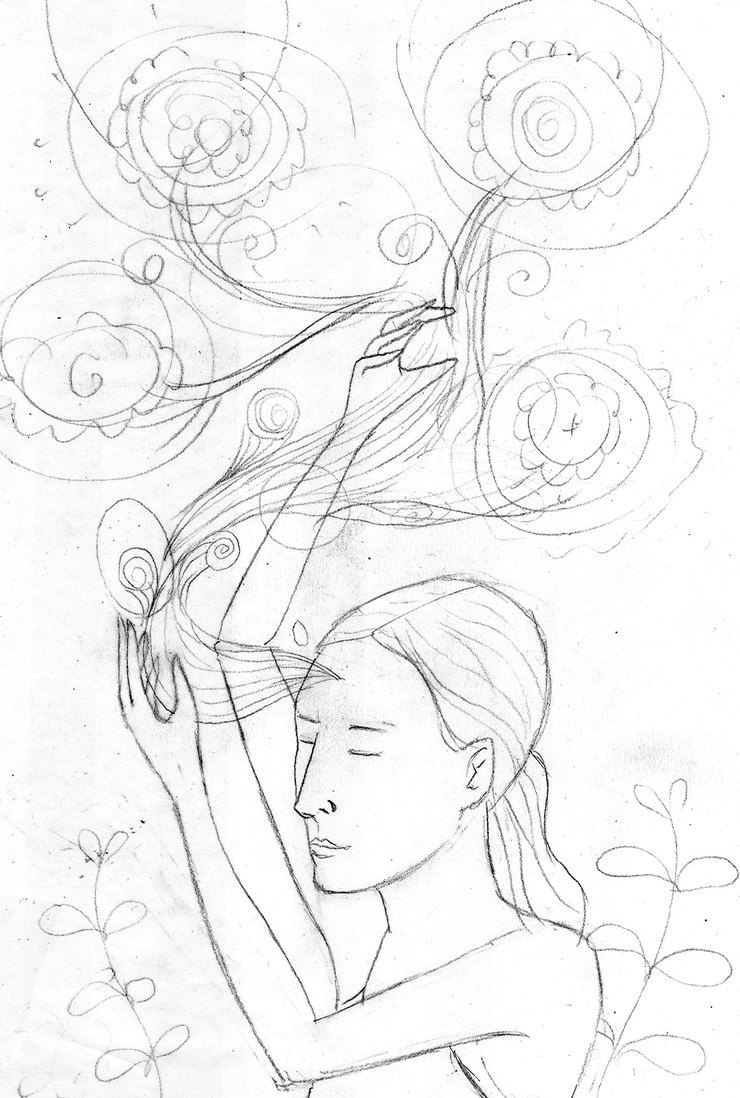 Final sketch.
Late one night about a week ago in Penn Station I was rummaging through the Newsstand Museum looking at my pals work and came across the new issue of Yoga Journal.  It immediately took me back to that wonderful time doing the job and the experiences I had out there in San Francisco.

The project also inspired me to get back in touch with the inner spirit.  I haven't been exactly centered lately with 1000 things all going on at once.  Not that anything specifically horrible is happening other than concerns about my mother's health. I just think I'd like to find that 'center' again and get a little more control over what's going on around me, in my mind and in my personal life.  This was a good job to do.  Thanks Ali! 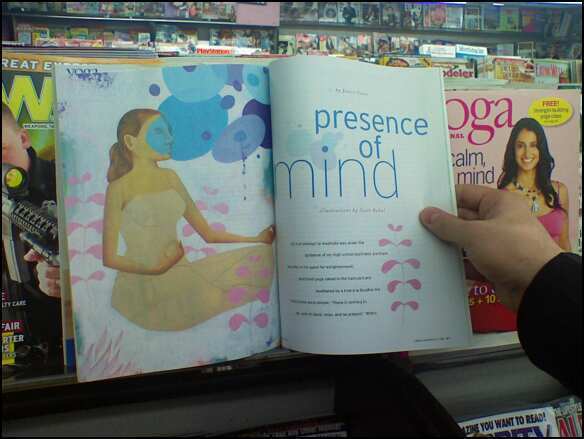