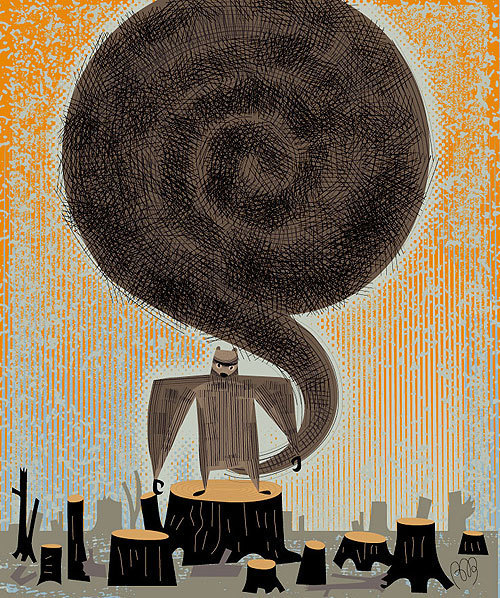 The final illustration for the LA Times Sunday Magazine
Last week I worked on a full page illustration for Liz Hale at the Los Angeles Times. I thought I'd share a bit of the process with you because I thought it turned out well.
It was for a humorous editorial article about obnoxious squirrels invading the fruit and nut groves and other, more domestic, suburban environs. What's a homeowner to do when squirrels begin chewing into his cable, telephone and electrical connections? 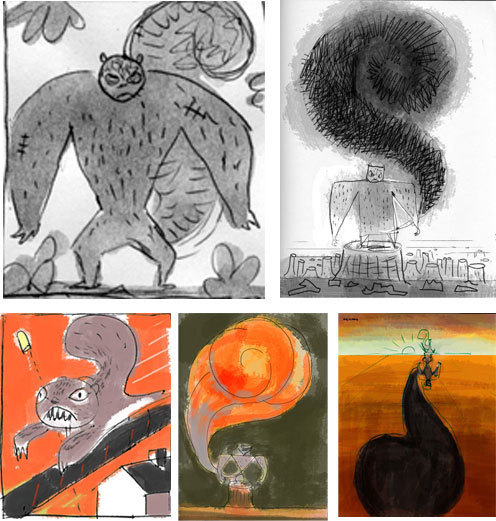 a variety of sketches. Lately, I've been doing sketches for jobs in my sketchbook so the pressure is on. 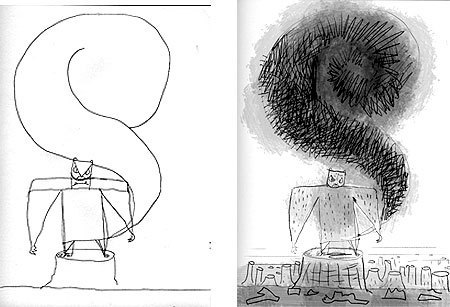 The approved sketch (right) started out a bit simpler (left). 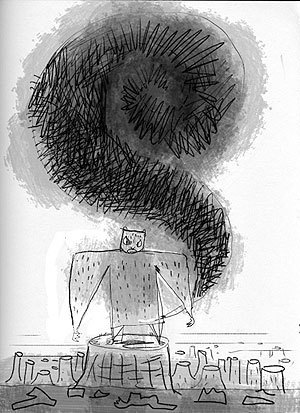 The approved sketch. I adjusted it a lot in Photoshop and added value and more details. 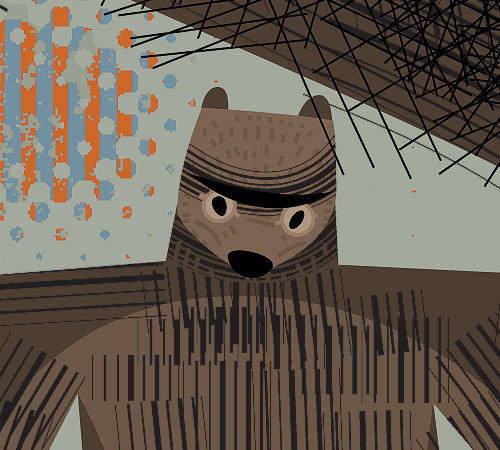 When seeing my final draft, Liz Hale, the art director wrote "LOve that BadAsssSquiRrel. don't change a thing!"
I began tracing the basic shapes in Freehand and started adding color and texture. The cross hatching in the tail are strokes sprayed in with nozzle. The actual lines are thousands of separate vector objects.
The drawing on the body and face was done with a custom brush made up of parallel lines of varying thickness.. 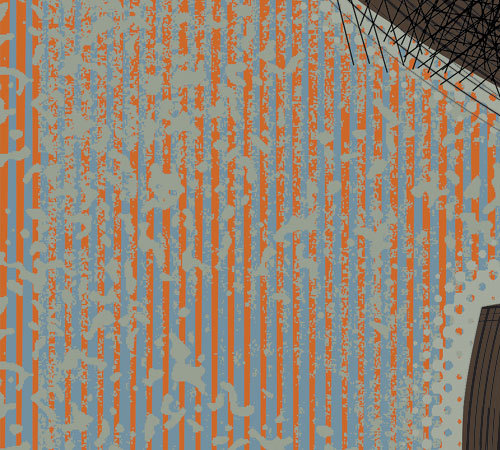 Layers of blends and colored 1-bit files bound up in an EPS wrapper! Bon gusto!
Lately, I've gotten on the texture bandwagon (it'll run its course I'm sure!). I have created and scanned decalcomania and inked brayer textures and converted them to 1-bit tiffs that I can drop into Freehand and assign colors to. I also create original textures in Painter and Photoshop and use those as well. The half-tone textures are the same basic process: create the gradiant in Photoshop or Freehand,  convert to grayscale and then convert it again as a 1-bit bitmap with a dot pattern. It's fun to layer it all up and mess around. I'm trying to replicate my painting process (or lack thereof!) with a set of digital tools. Not to recreate the paint look but rather to be truthful to the digital tools I'm using. Just use them in a "painterly" way.
Topical: work
Latest
trees Some recent pictures Free Fallin' On the Wing A miscellany: Merry Christmas and Happy New Year Because Uncommissioned Work miscellaneous sketchbookery Harvard Art Museums Observations 2015
Topics
Topics
Just thinking artist birthdays Children's Books Editorial Papercraft Recommended sketchbooks work
Archive
Image Galleries
2014 2015-2016 2013 Observations 2012 2011 2010: Jan - July 2010: Aug-Dec. 2009: Feb - June 2009: July - Dec. 10/2008 - 01/2009 2008: Feb - May 2008: June - Sept. 11/2007 - 01/2008 2007: May - Oct. 2007: March-April 2007: Jan - Feb 2006: Nov - Dec 2006: June - Sept. 08/2005 - 06/2006 random sketches: 01 Collage Sketches Iceland sketches Paintings Fictitious Faces & Erratic Events The Red Tie Homerun Heroes Envelope paintings Geometric People My Little Monkey Computer Games Little People Jerome Snyder (CREATION #12) The Dandelion's Tale 2017
© 2022 Rob Dunlavey