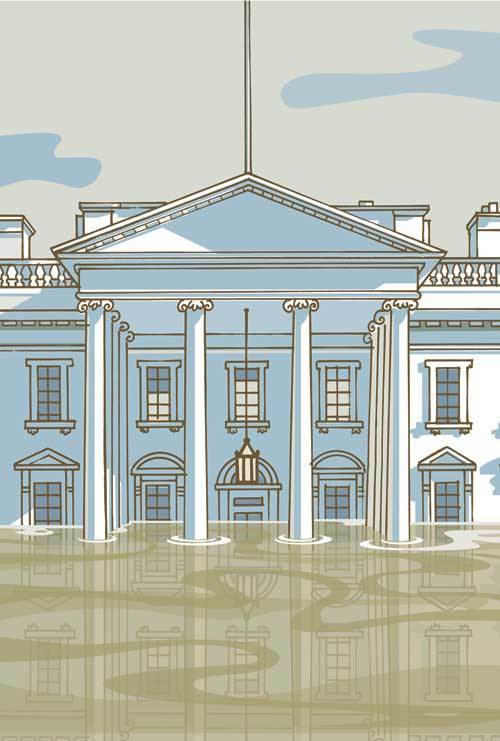 Summer White House 2005
I did this drawing for The Progressive in the days following Katrina as  the country watched  an entire city be lost.  New Orleans was under water and I was wishing it was Washington that was flooded.

Almost three years later,  we’re looking at presidential candidates and New Orleans seems to be the city that care forgot again. Much of the city still looks like the flood that followed the collapse of the levees happened a few weeks ago.  Entire neighborhoods are abandoned and the people who once lived there are scattered and still trying to put their lives back together. This is not the way America is supposed to treat its citizens. It remains the biggest failure of the Bush Administration, yet I don’t hear any of today’s candidates  seriously discussing how they would bring about change in Louisiana. 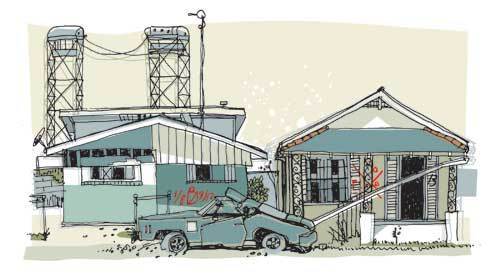 Tupelo Street
I was down in New Orleans the summer after Katrina and I rented a car, drove around the Ninth Ward, took some pictures and did some drawings in my sketchbook. I sent them to Brian Rea at the New York Times and he ran them on the Op-Ed page on the one year anniversary.

The devastation was impossible to understand without being there. Blocks and blocks of empty houses, upside down cars and broken trees lie in a neighborhood that once was full of life. People had lived on the same blocks as their parents and grandparents for generations in the  Lower Ninth Ward.
The morning I was there it was silent, I didn’t even hear any birds. 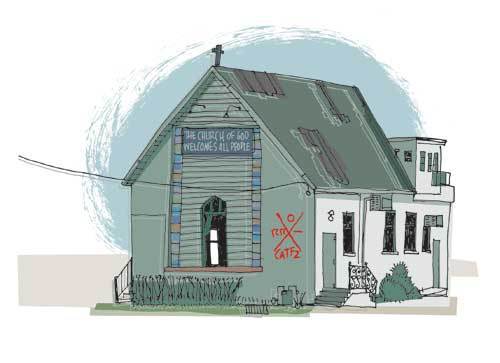 I had WWOZ on in the car.  It was Sunday morning and the regular gospel show was playing on the radio as I drove around. 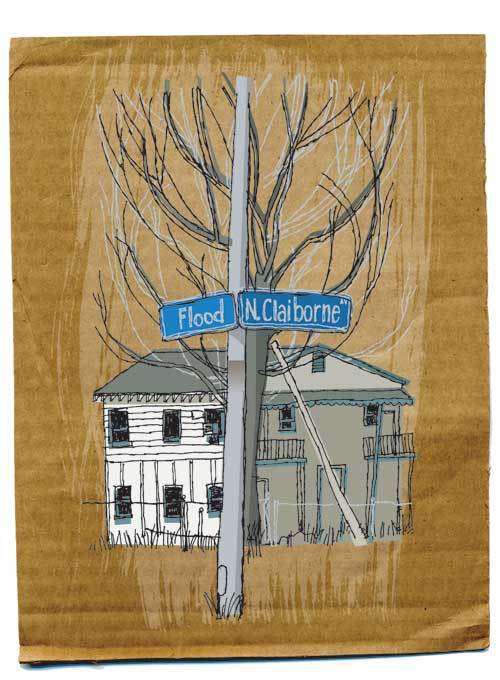 The street signs had a dark line about eight feet off the ground that marked the spot where the water sat for days. I read that the water was full of snakes that grouped together in knots and drifted about. Doors and other floating debris were covered with cockroaches. The water was mixed with garbage and sewage. I stood under the sign and thought about how long I would have lasted out here. 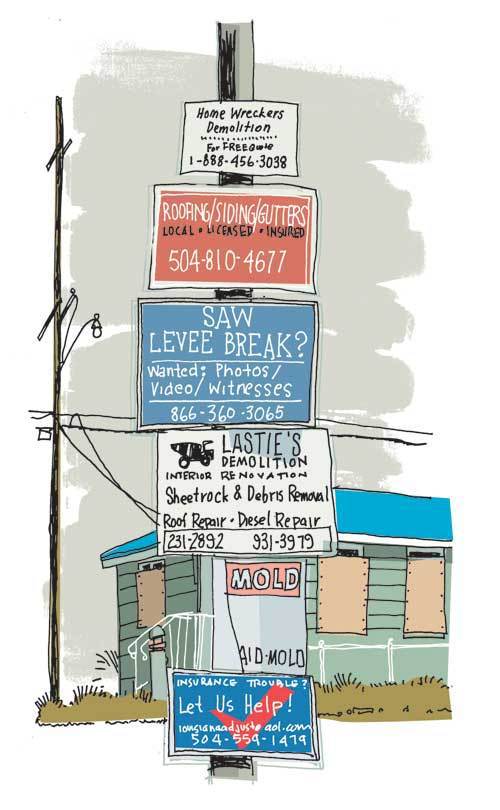 There was a do-it-yourself vibe to the little bit of cleanup and salvage going on when I was there. A few local groups were trying their best to lend each other a hand, Habitat for Humanity had a project going, building some new homes for musicians. But there was no evidence of any government projects anywhere. This was a total failure of leadership on all levels, and it continues today. 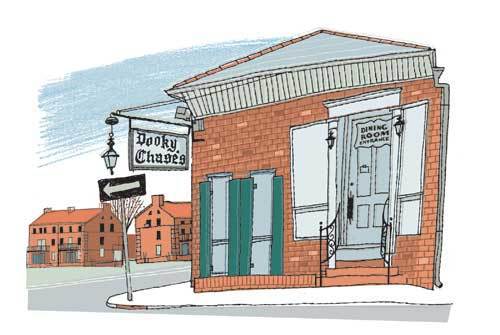 Dooky Chase's is a legendary restaurant and center for the African American community. Its history dates back to the era when blacks were not served in the restaurants in the South, and this was a spot where they could enjoy a meal. Celebrities,entertainers, and civil rights workers always found a warm place here. Mrs. Chase is 83 years old and one of the most beloved chefs in the city; each time I’ve been in her restaurant I feel a special blessing when she comes out from her kitchen to sit down and chat for a few minutes.

Across the street the housing projects remain boarded up and there is talk of
demolishing them for a mixed use development that will make  somebody rich at the expense of the families that used to live there. 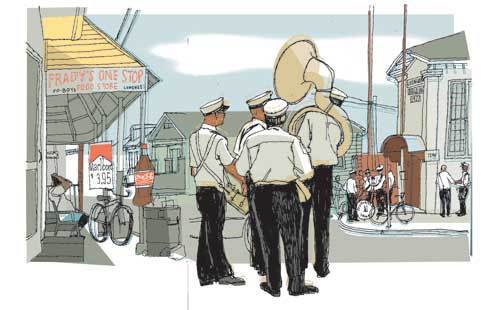 New Orleans will rebuild itself, because the spirit and the soul of its people won’t let it die.The week I was there I joined a second line parade for a drummer who had just died. The tradition of funerals with music is a strong one here.  The idea is that you’re sad for your friend and the loss of his company,  but you’re happy to still be on the right side of the dirt and you should enjoy every day. The whole neighborhood joins the parade and everyone seems to be saying, "we know it’s a sad world, but let’s make the best of it." 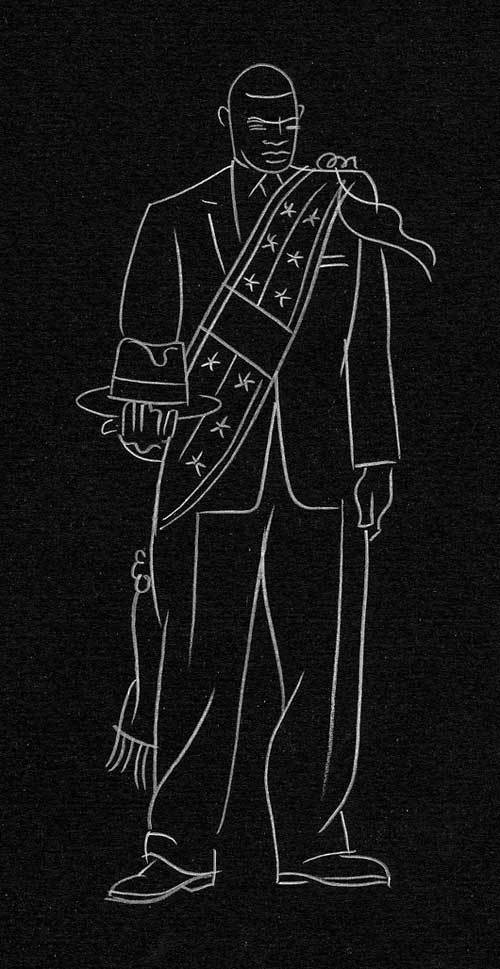 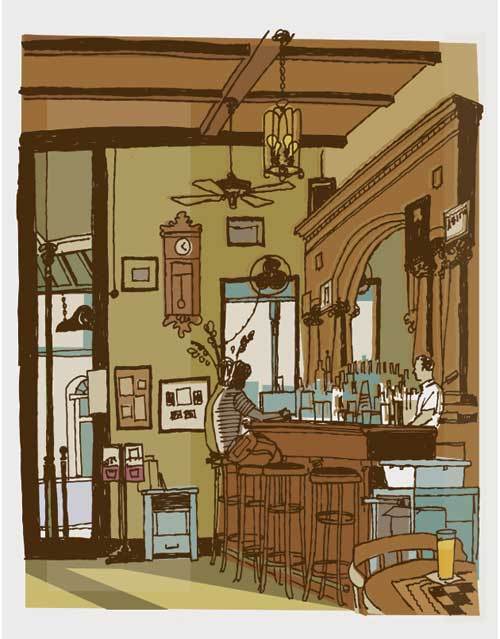