Jean Baptiste Oudry at the Getty 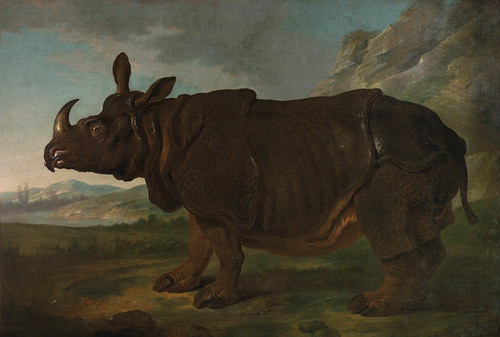 On May 1st, the Getty Museum in Los Angeles will open a exhibit of works by Jean Baptiste Oudry (1686–1755), one of the most celebrated animal painters of his day. Among the pieces in the show are two works, Rhinoceros and Lion, that underwent a massive 5 year restoration and conservation at the Getty. These pieces will be included along with nine other paintings by Oudry, as well as many of his drawings.

The immediate artistic ancestor to George Stubbs, Oudry took conventional animal painting and elevated it to the level of portraiture. These pieces were part of a series commissioned to document the exotic animals of French King Louis XV, who kept these creatures at Versailles and occasionally toured them around capitol cities. The Rhino above is Clara, and she was something of a celebrity in eighteenth-century Europe, where the rise of Empiricism and an interest in natural history created a thirst for knowledge of the animal world. Oudry created the most accurate representations of the rhino to date - an animal that had until then been depicted in Western prints and paintings as something closer to a dragon or dinosaur than the creature we know today. He also was a master at capturing the sense of aggrandizement and nobility that was a significant reason to own - and have portraits made of - exotic and pure bred animals.
Topical: Art History
Latest
Dante's Inferno AI-AP PROFILES Interview Neil Young: The Monsanto Years Mmm, Crickets The Age of the Unicorn Je Suis Charlie NYT Book Review Cover Horse Power Courage (Liquid and Otherwise) LA Shows: BLAB! and La Luz
Topics
Topics
Art History Events Music Projects Travel & Fun
Archive
Image Galleries
Commissions Portraits Gallery Work Drawings Sketchbooks, etc. Beer Coasters Southern Exposure Architectural Faces Gravestones
© 2022 Marc Burckhardt