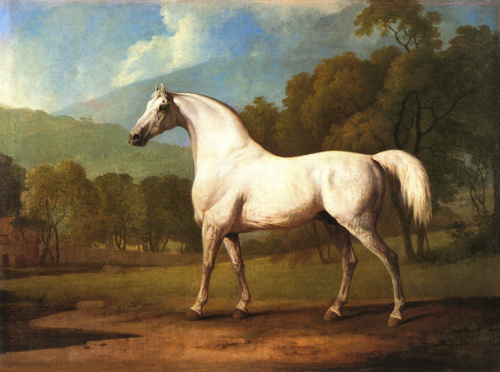 On February 14th, the Frick will open a show of work by George Stubbs (1724 –1806) one of the most underappreciated 18th century British painting masters. His lack of reknown is primarily due to his subject matter: he created portraits of horses.

Stubbs also did many very powerful portraits of humans and exotic creatures from around the world, but was primarily a painter of domestic animals, which were commissioned for their "status" as objects of wealth and power. What makes his work so unique was that he portrayed these animals with an attention to detail and personality that raised the bar of the artform.  If you find the genre of English sporting paintings at all interesting, Stubbs' work is without a doubt the pinnacle of it.  And then there's the Frick itself, which is always a treat to visit.
Topical: Art History
Latest
Dante's Inferno AI-AP PROFILES Interview Neil Young: The Monsanto Years Mmm, Crickets The Age of the Unicorn Je Suis Charlie NYT Book Review Cover Horse Power Courage (Liquid and Otherwise) LA Shows: BLAB! and La Luz
Topics
Topics
Art History Events Music Projects Travel & Fun
Archive
Image Galleries
Commissions Portraits Gallery Work Drawings Sketchbooks, etc. Beer Coasters Southern Exposure Architectural Faces Gravestones
© 2022 Marc Burckhardt