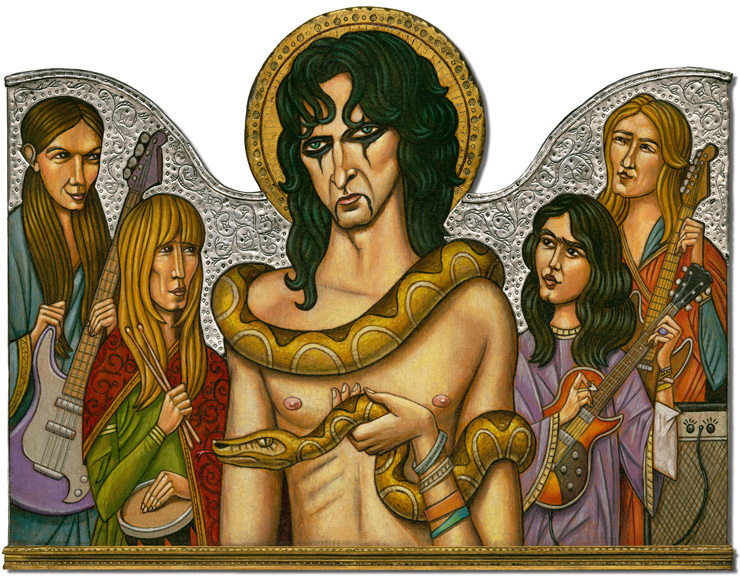 Alice Cooper Band | Acrylic & oil on wood with tooled metal
...or the longest post in Drawger history.
The last month has been a whirlwind of activity--one that's been filled with art, music and fun. At the top of the list was the completion of a project I've been working on for a while, the 26th Annual Rock and Roll Hall of Fame Induction Ceremonies, for which I was commissioned to create the official portraits. There were eight inductees this year: the Alice Cooper Band, Tom Waits, Dr John, Darlene Love, Neil Diamond, Leon Russell, Art Rupe of Specialty Records fame, and Jac Holzman, the founder of Elektra/Nonesuch Records. It was a dream job for a guy like me, and the best part was attending the formal ceremony/dinner/concert at the Waldorf Astoria in NYC on March 14th. 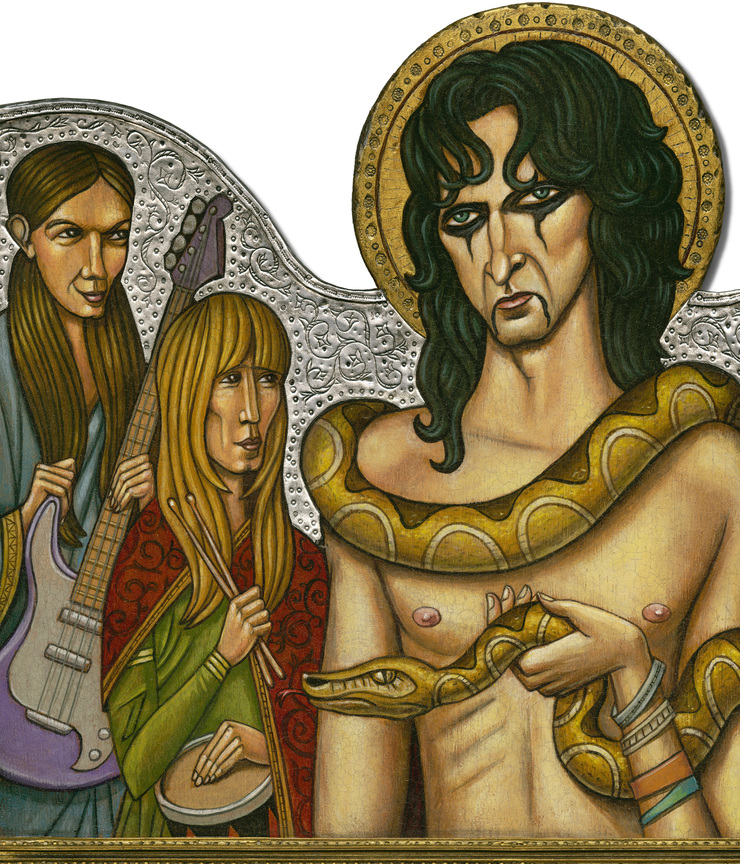 detail
We got to meet Alice, Michael Bruce, Dennis Dunaway, Neil Smith, and of course the python, as well as Dr John, Darlene Love and a host of others, including Rob Zombie, who did the introduction for the Alice Cooper Band. The room was filled with legends: Elton John, Bruce Springsteen, Paul Simon, Judy Collins, John Mayer, Neil Young, Bob Geldof, Paul Shafer, Bette Midler, Michael Douglas and Catherine Zeta-Jones, and of course Jann Wenner, who was the host for the evening. We finished the evening at a private party downstairs where we also got to meet Jac Holzman, a legend in the business who signed the Doors, Iggy and the Stooges, and Queen, to name just a few. We rolled in to our hotel room around 4am, glowing from a great night.

Top to bottom, left to right: Alice's python; Alice and the band; Me & Dr John; Janice and Paul Shafer;Tom Waits performing; Elton John and Leon Russell
We returned home to Austin just in time for the kickoff of South by Southwest's (SXSW) Music Festival, one of the biggest music industry events in the world, and one that just happens to go on in our backyard. Over 2000 bands from all over the world converge on downtown Austin for 4 days of nonstop music on practically every corner. In fact, Jack White set up on the street outside Frank's Hot Dogs for an impromptu performance:


The Strokes also played a free show on Auditorium Shores, just across the river, and literally steps away from our house we caught the Meat Puppets at the Waterloo Records stage, tearing through an amazing version of "Lake of Fire":


For a few days, the city becomes a giant festival, with interactive, film, and music freaks mingling and partying together--sort of a Mardi Gras meets Burning Man meets the TED Conference, with beer & BBQ thrown in the mix.

And this year we were able to catch Drawger's own Josh Carpenter (Zimm's computer wiz & man behind the curtain) who was here playing with Floating Action. We put the band up for a night at our place and caught their showcase on Friday night. They were off early the next morning for the next destination on their tour, but we got a little bit of hang-out time while they were here and it was great to see them play again. 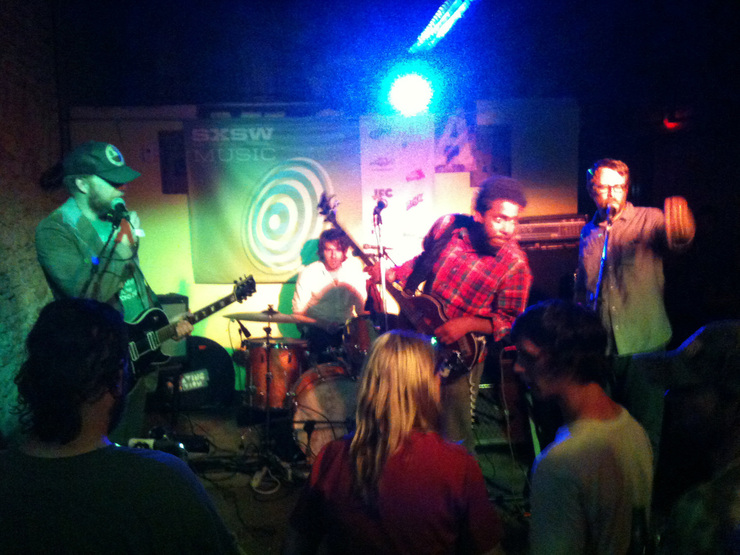 Floating Action: Seth Kauffman, Josh Carpenter, Brian Landrum, and Mark Capon
On the heels of all this, I was off to be a featured speaker at the Creative Summit, along with designer Dana Arnett of VSA Partners, industrial designer Nick Cronan of Fuse Project, John Sabel, creative director at Disney, branding creative Karin Hibma of Cronan, photographer Michael O'Brien, and the amazing collage artist Lance Letscher. The Summit is the brainchild of the wonderful Chris Hill, a legend in the design field (and a AIGA Fellow Award winner), and his wife & partner Heidi Hanna. This was the 25th year they've made this event possible, which combines a national student competition with talks and Q&As by professionals that over the years have included the top names in the field of communication design. The students that attend this event are energetic and talented, and it was great fun hanging out with them all.

Top to bottom, left to right: Chris Hill & Karin Hibma; John Sabel & Chris; Michael O'Brien; Bay area painter James Warren Perry;the amazing Cronan family; Michael, the patriarch; and me yammering. Photo credits: ÃÂ© Tichaporn Namwong
Now I'm back in the studio, easing into the quiet, solitary life of an illustrator again. It's been a entertaining month, but I'm ready for my regular routine. Big thanks to Tim & Elizabeth O'Brien for the hospitality while we were in the city, and to Chris & Heidi for treating us like royalty at the Summit.