I've been off the board and traveling this summer, taking in some great art and getting inspired. One of the amazing things i came across was in Salzburg, where the "Panorama Museum" houses the collected works of Johann Michael Sattler, one of the most prolific landscape artists of the 19th century. The main focus of the museum is his colossal mural of Salzburg, 16 feet high and 85 feet long, completing a perfect 360 degree view of the city as it appeared in his time, 1825. 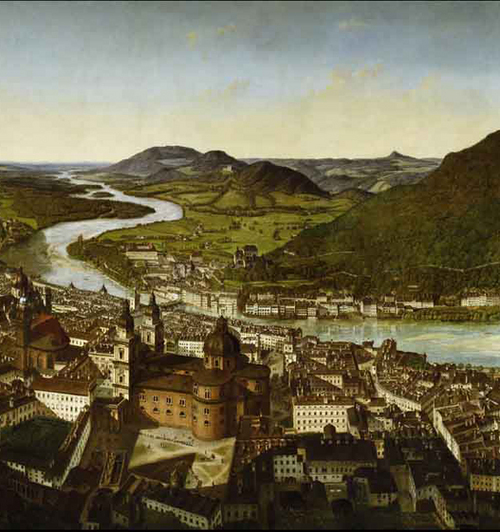 To say Sattler was detail-oriented is an understatement; imagine Tim O'Brien on steroids, and you get the picture. Even more impressive than the Salzburg panorama are the host of depictions of cities throughout the world, which he painted with a degree of finish that makes you want to put your little brushes down and take up house painting. And the genre of panorma itself is fascinating, done in the spirit of giving an accurate and even scientific depiction of the world most folks would never see otherwise, with just a hint of the sideshow spectacle. Apparently these "cosmoramas" were all the rage in the 18th and 19th century, and there were a number of artists who specialized in these works, though very few of the paintings remain and even fewer compare with the Salzburg work.
Inspiring and humbling stuff!
Topical: Art History
Latest
Dante's Inferno AI-AP PROFILES Interview Neil Young: The Monsanto Years Mmm, Crickets The Age of the Unicorn Je Suis Charlie NYT Book Review Cover Horse Power Courage (Liquid and Otherwise) LA Shows: BLAB! and La Luz
Topics
Topics
Art History Events Music Projects Travel & Fun
Archive
Image Galleries
Commissions Portraits Gallery Work Drawings Sketchbooks, etc. Beer Coasters Southern Exposure Architectural Faces Gravestones
© 2022 Marc Burckhardt