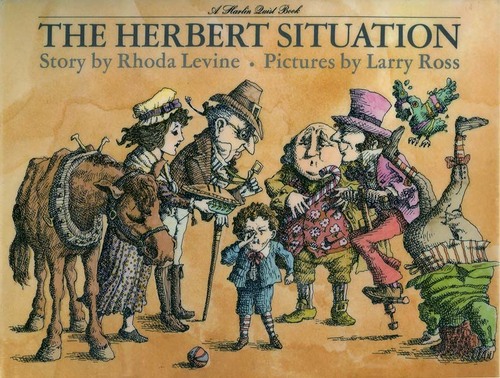 Thanks again, Randy, for mentioning the great, long forgotten Harlin Quist Publishing house.  And for inspiring me to post this story that I’ve been thinking about putting up for a while.  Harlin was a unique, rebellious, quintessentially 1960’s individual who published the kind of books that were ground-breaking.  He introduced European illustrators like Etienne Dellesert to an American audience and his books appealed to adults as well as children.  They were sophisticated at a time when most children’s books were in the Dick and Jane mode.  It wasn’t until I had seen some of them that I ever even considered illustrating children’s books.  I didn’t know it until later but this distinguished publisher ran his business on a shoestring.  He had taste and principles that were more important to him than making money.  He would spend extra money to get quality printing when it might mean he wouldn’t make a profit.
I hopped on my motorcycle sometime in late 1968, strapped on my portfolio and took it over to the Quist apartment/office in lower Manhattan where I showed it to Harlin’s assistant.  He liked it and said he would recommend me to Harlin.  A few month’s later Harlin called me back, looked at my stuff and handed me my first children’s book to illustrate.  It turned out well and Harlin wanted to do another book based on some drawings of mine that he had seen earlier.  I went over to the “office”, I spread out some of the drawings on a coffee table that was between two opposing couches.  As we were looking at them and discussing some possibilities, something happened that pre-stages the story Randy told here earlier. The doorbell rang.  Harlin glanced at me, put his finger to his mouth in a “quiet” gesture and got up and quietly walked over to the window, pulled back the drape and very carefully peeked out the window down at the doorway.   The doorbell rang several times again and this famous publisher just stood there.  Finally, it stopped ringing and he straightened himself up and came back to the couch opposite me, sat back down and calmly said, “Bill collector.”  At that point I was glad that I had been paid for my first book.  I went on to illustrate over 30 children’s books after that but that one is still my favorite.  There’s a warm place in my heart for that book and for the very special publisher with the unique name of Harlin Quist who had a vision and hid from bill collectors.
Harlin moved his headquarters to Europe several months after that.  Probably right around the time Randy dropped off his portfolio.   He continued to do great books from there.  Those were the days.
Latest
Back to the beach! Wheelies! Turbulent Times Is There A Chance? Humble art for a "Humble Beginnings" show. Dogger Day Driving without destination? FaceBook...or not? Grin and bear it Tanglewood...
Topics
Topics
introduction
Archive
Image Galleries
portfolio Early Work Sailing experi Italy sketchbook Go Figure Baseball Italy photographs
© 2021 Larry Ross