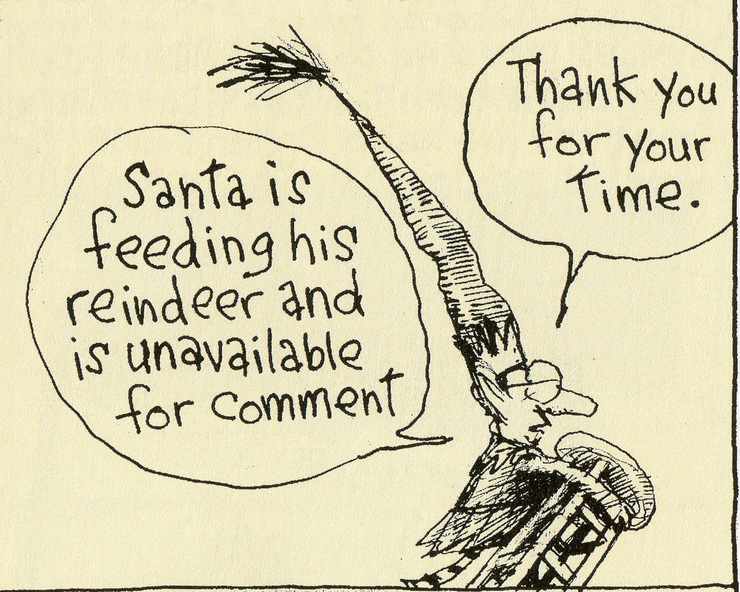 Look at this little Christmas elf. I didn't draw it. I wish I had, I love it so. I love the briskly officious attitude of this guy and how I just know he's a humorless, but efficient, workshop employee who is simply doing his job, and how he really can't be bothered at the moment. I love how the artist, Richard Thompson, can draw a tiny single panel in a newspaper cartoon and  provide an entire little character study by drawing a funny little character.
And see how the elf heads out of the bottom of the frame with that determined posture, and how the tilt of the oversize stool emphasizes that determination while also providing the funny contrast in scale?
Look how that ridiculous hat, with it's violently decorative sprig, so expertly cleaves the panel and  provides the reader the perfect percussive beat between the talk bubbles. In addition to the aforementioned hat, there's just the right amount of  information in that outfit - a bit of pointed collar, striped leggings and some kind of belted holiday frock- to convince us of "elfishness", but not so much frippery that we get visually bogged down in the details. And then that face, a half dozen short spiky lines going in different directions and applied with various and subtle degrees of energy and pen pressure. Some lines just barely intersect one another, and there's what might be a bit of ink spatter under a wobbly drawn nose that supports oversize office drone glasses. Should the back edge of those glasses be slightly obscured by a cheekbone at this angle? Should the pleats on the elf's outfit be rendered more"roundly", or that cross hatching under the stool, should it be cleaner so as not to clog into solid black?
Thompson, of course, could have "fixed" those things. Or drawn them more correctly - he's one of the great comic draftsmen of his generation- but  he chooses not to. An expertly rendered elf hand grabbing the stool leg serves no purpose here. Whether instinctive or deliberate, these are choices and decisions that Thompson makes. There are a hundred decisions like this made in the drawing above.
This intersection of ferocious artistic discipline and instinctively capricious mark making is where an artist like Richard Thompson lives. It's a place most of us rarely get to visit- this guy LIVES there - a twilight zone sweet spot where Control and Spontaneity meet, shake hands, and sit down for a couple of beers.

Richard is a friend of mine but he's also one of my art heroes, and whenever I talk about him or his work I revert to the gushing fan boy who's enthusiasm will simply not be contained. Please forgive me for that, and for the paucity of examples of RT's work that I'm posting here.  In this regard I've chosen to go micro istead of macro .
As you may be aware, Richard's talent is Whitman-esqe. I could never begin to describe or display the range of his work in illustration, comics, caricature and cartoons in this forum. Luckily, there's a book for that. It too, is large and contains multitudes. 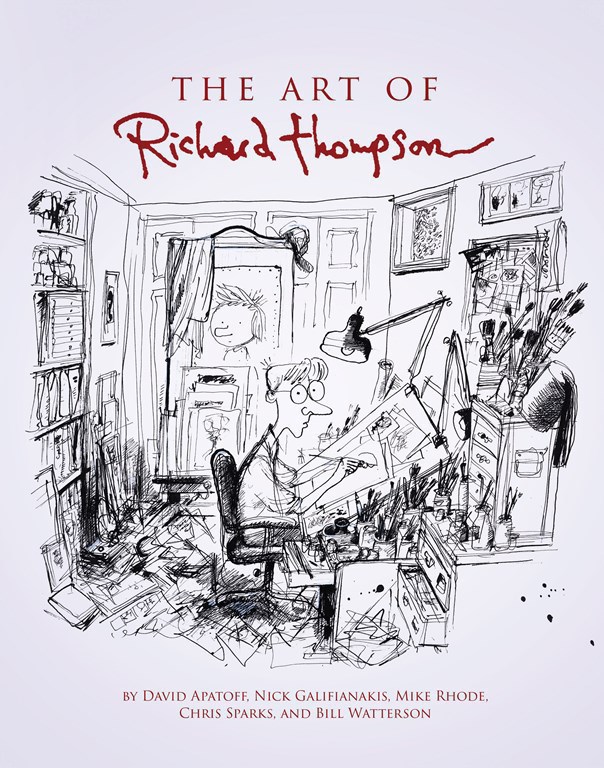 This cover drawing is scarily accurate. 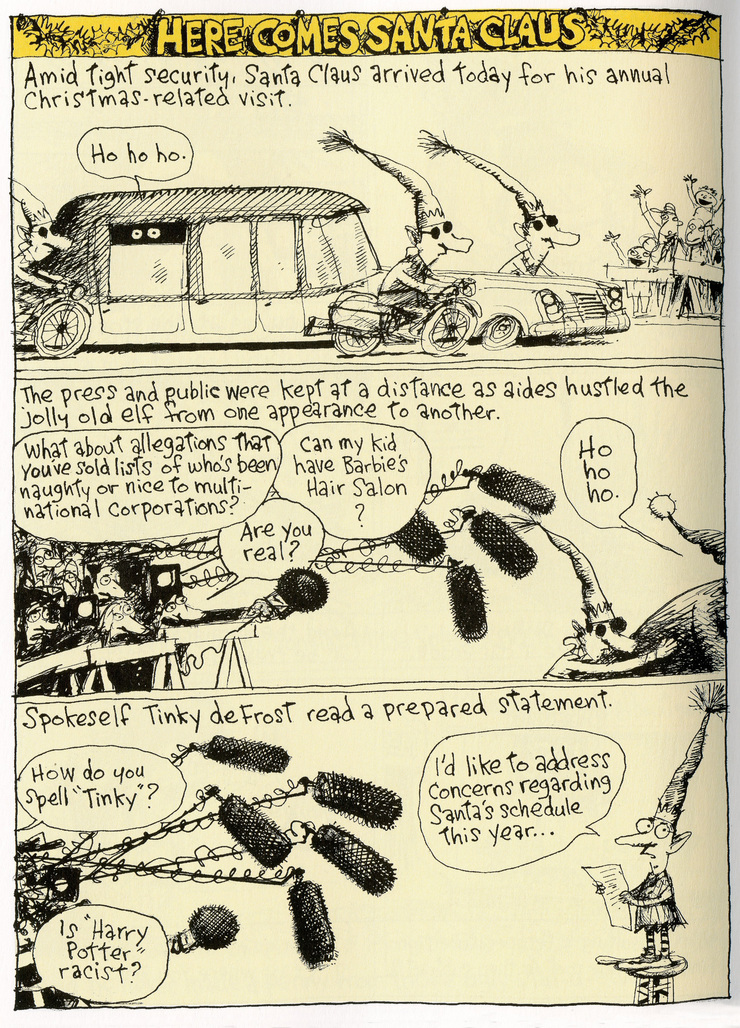 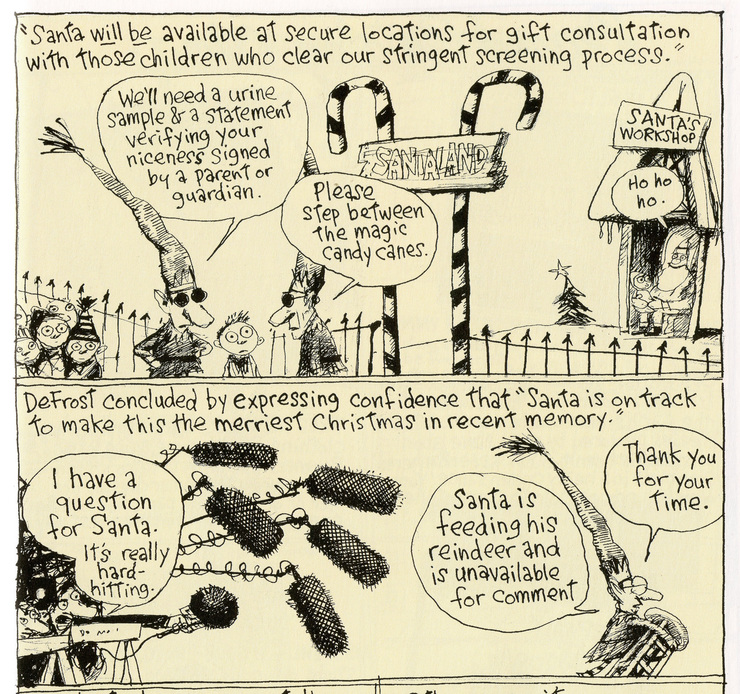 The last time I saw Richard we were crowded into his studio, along with a couple other friends who were busy archiving and organizing his work. Richard was next to me, fumbling through a drawer of supplies looking for a certain pen nib he wanted me to try, and promising grand results. (Think of Michael Jordan giving you a pair of sneakers, and telling you to go ahead and dunk). Meanwhile, I was reverently paging through a box of originals somebody had passed down to me from a towering stack. Probably a hundred drawings in my lap, each one a scratchy little gem of comic brilliance, and each exhibiting the same sublime evidence of drawing and decisions I expounded on above. Perhaps my mouth went slack or my eyes betrayed a gobsmacked stupor of mystified reverence, but at that moment, somebody on a stepladder against a bookshelf looked down at me over his shoulder and said, "It's too bad you can't see the work that made the cut for the book, the best stuff is all at the Designer's place."
It took a crowd of famous Cartoonists, Scholars and Illustrators to put this volume together. Among the contributors (and fans) are luminaries including as Bill Watterson, Peter deSeve , caricaturist John Kascht and Pulitzer Prize winning writer Gene Weingarten. Here's a short film about  Richard, and the making of the book. In it, Richard's colleague and great friend Nick Galifanakis eloquently describes the collective effort involved, and David Apatoff, the art blogger and historian, shares observations and wears a tie.


The Art of Richard Thompson from GVI on Vimeo.
ps. Things may not read perfectly in this post but it would be a good deal worse were it not for the generous technical help of Mr. David Flaherty.