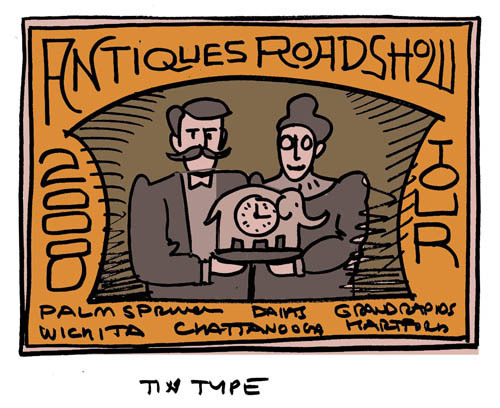 T shirt sketch
Another season of Antiques Roadshow is about to begin
and for the fourth year in a row I have done a poster for them.

Last spring when I was designing the t shirt image for the
production team they were drawn to one of my sketch ideas
as a possible concept for the 2 ft x 3 ft poster that gets
produced in the fall for their winter/spring promotion.
The sketch was of an old tintype photograph with a couple
holding their new proud possession.  The idea being that this
object will in later years be the proud possession of someone
else who would appear on Antiques Roadshow.  The decorative
cardboard frame often holding old photos would provide
space for the show name, cities and other information. 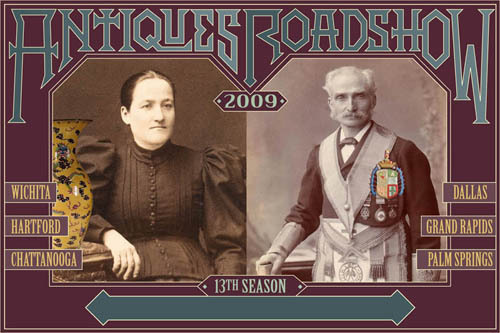 Poster idea
Over the summer while they were filming the shows, I developed
the sketch idea using a few old photos pulled from the web and
really got into designing the Antiques Roadshow type. 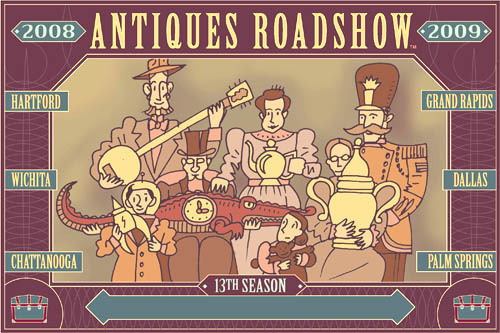 Poster sketch with a group
The branding people don’t want me to screw around with the
logo too much, and my type treatment went way too far.
Oh well, I really love the lettering. They now wanted to see a
grouping of people rather than just a couple.
The next sketch was of an assortment of off-beat characters
all proudly holding their future antiques. The people would all
look like they were from a hundred + years ago but the
possessions would run the gamut from then to the 1950’s.
I saw the people as a collection of slightly oddball characters,
an Adams Familyesque type group that were not to bizarre
as to offend people.  The client liked the group and the direction. 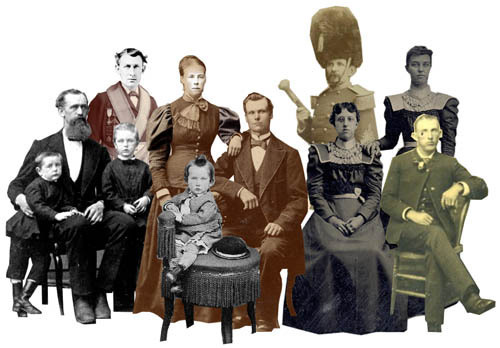 Web image collage
I was excited about coming up with a cast of characters, which
I was planning to render in a duotone palette, playing off the
tintype look. I collaged some tintype images pulled from the
web to get an interesting grouping. 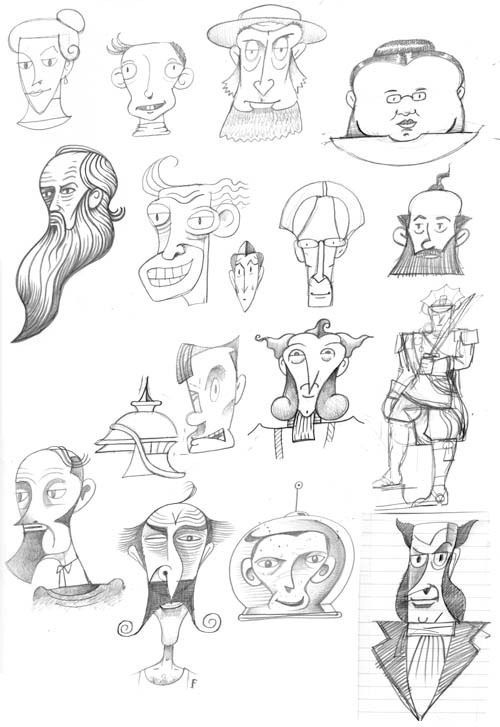 Pencil sketches
Pencil sketches of the people started to fill my sketchbook.
I was envisioning a blended cartoon/realistic look to the cast
Here comes the curve ball! 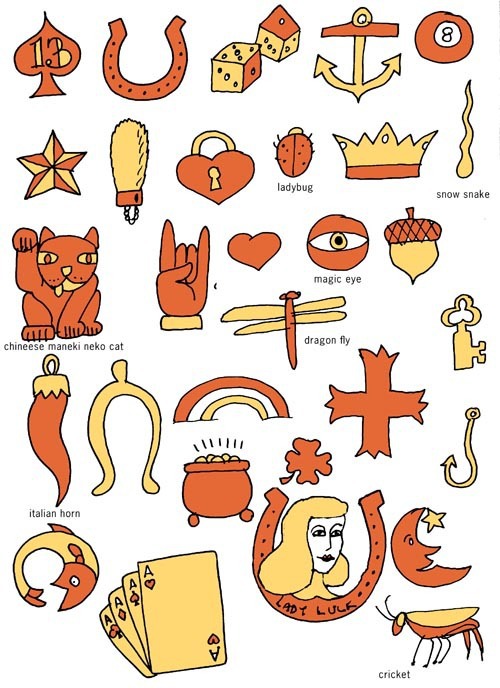 Some lucky object sketches
After a couple days the client felt this direction wasn’t right
and wanted to pursue a new direction. It will be the 13th season
of the US show and they wanted to play up the concept of
‘Lucky Season 13’.
Big disappointment,  but that’s sometimes how it goes and
it’s their dime. I started to investigate the theme of Luck and
came up with a number of  objects. 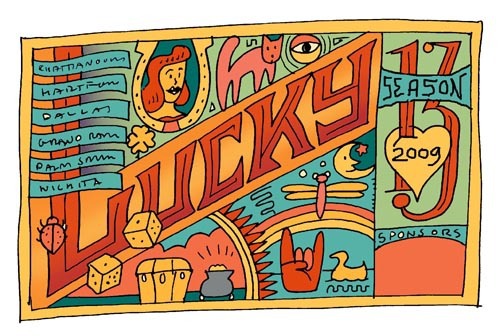 Lucky sketch 1
I worked up 4 quick ideas based on the lucky objects, added
color and sent them off for presentation. 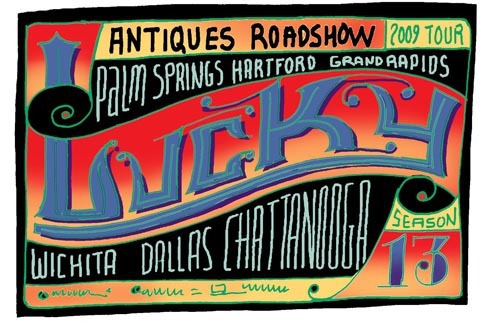 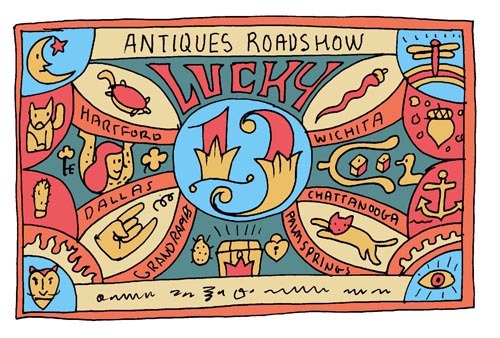 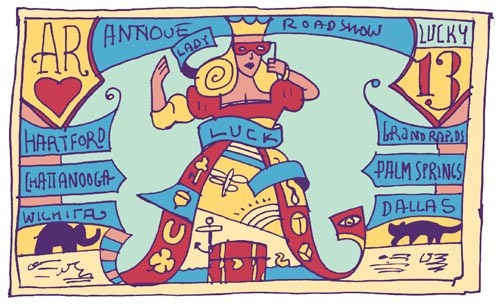 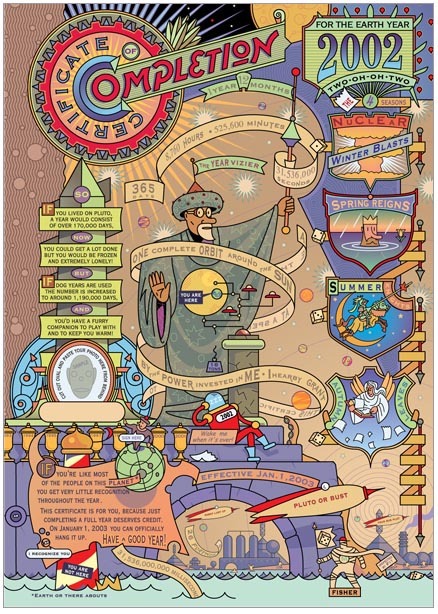 Possible direction
The producers really liked the Lady Luck idea but wanted to
see it as a vertical poster. They included an image from my
web site that they liked as a possible feel.  a central figure with
a lot of elements around it. 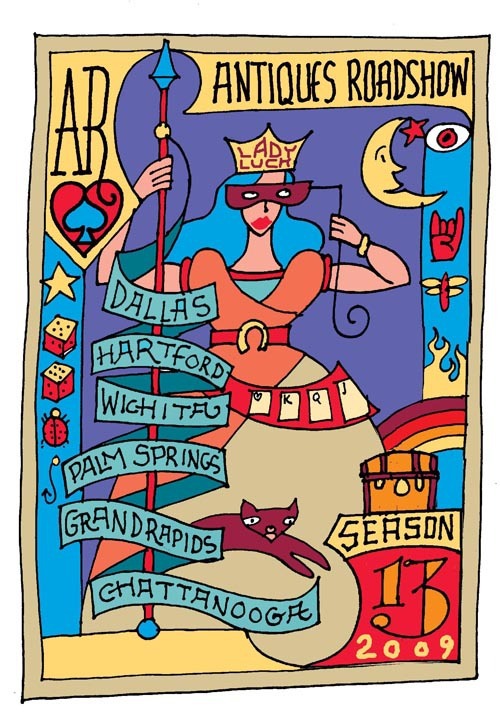 Laady Luck sketch
Originally saw her as one of the queens from a deck of playing
cards and now with the vertical shape I could play off the card
theme a bit more. I sometimes fall into the trap of developing
a sketch too far in Illustrator as I did in the original poster idea
with the hand drawn type, so this round I sent a quick reworked
idea off. 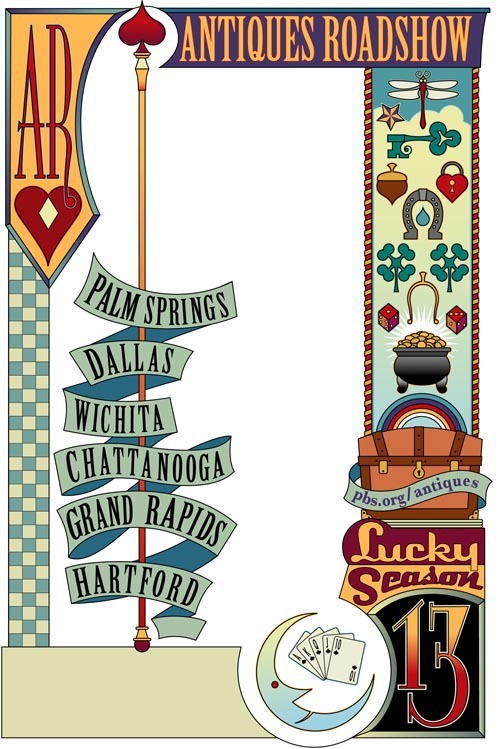 Work on the lucky symbols
They loved it but wanted a sexier lady luck rather than the one
my sketch was looking like.  I knew that would take some time
so I forged ahead with some of the lucky symbols, logo and type.
There were certain images of luck they said no to,  which was
too bad because some of them are interesting animals or
somewhat sinister symbols all of which could add a little drama. 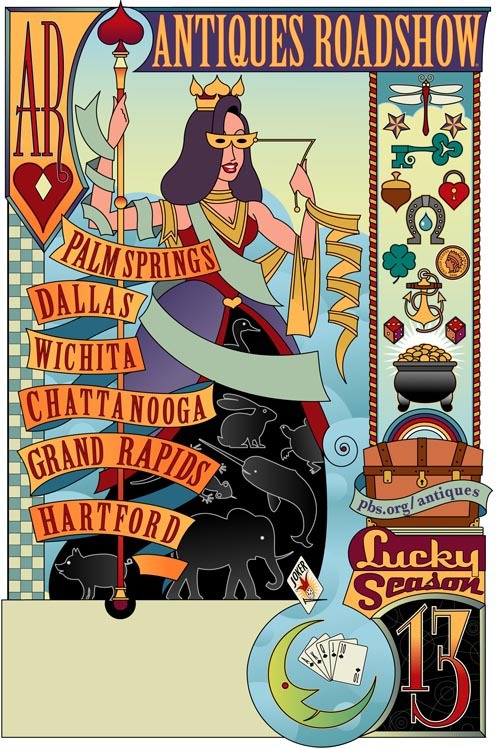 Developed Lady Luck
When I came back with this stage of the poster they liked her
but the skirt with the lucky animals was too much and they felt
the whole poster was looking cluttered and unfocused.
I had to agree with the lack of focus so proceeded to make
some changes based on feedback and suggestions. One big
suggested change was to drop a few of the elements that up
to now they had liked.  The right hand icon band and the
Lucky Season 13 badge in the lower right hand corner
should go.  I would try having the Lucky Season 13 on one of
her sashes. I was real attached to the badge and the hand
lettering, it will eventually find a use down the road.
If your still with me, by now your probably wondering
“What the heck is this guy some art slave, shackled to the
drawing board  in some PBS dungeon?”  Sort of.  Projects like
this one can be frustrating at times because of the number of
individuals involved in the decision making process.  When you
have numerous decision makers with crazy schedules, getting
consensus let alone feedback can be very hard. Endless
suggestions and nit picking can bog the process down.
Getting all the gears to mesh can be quite a challenge and
presents the opportunity to arrive at an image that all can feel
great about.  In many of my projects over the years, be it
software packages, corporate logos or TV promotions there are
always at least a handful of people whose input is crucial
to getting the art right. Flexability and patience helps. It also
helps when the client is one you respect and the art director
and you are in sync. I am usually never there to present the work
at WGBH and Dennis O’Reilly the ad/ designer is great at focusing
the critical eyes and addressing my concerns.  With certain clients
I often find suggested changes valuable in helping me
fine tune my own aesthetics and layout logic. 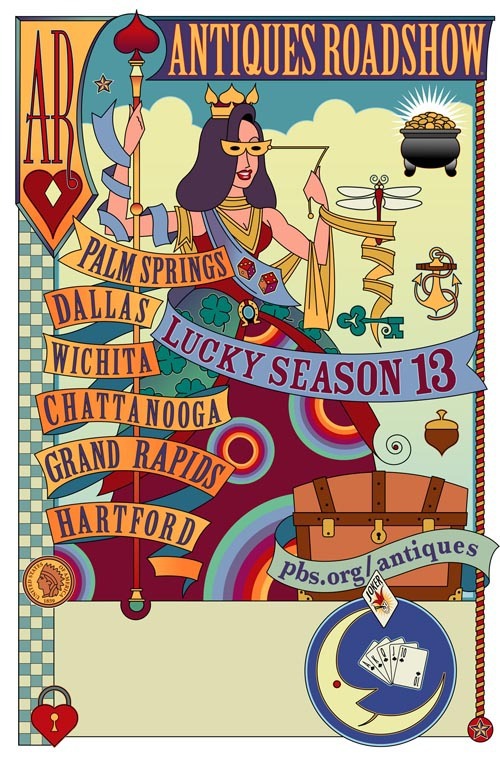 Next stage
So I moved the elements and presented this new layout which
was still not working in all of our opinions. 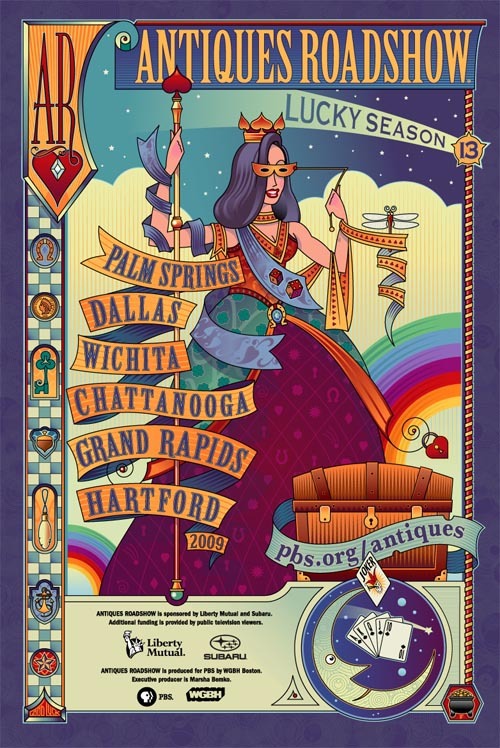 Finished poster
Someone suggested the Lucky Season13 in the trail of a
shooting star, which was a great idea. At this point all the
elements were there and it was just a matter of cooking the mix
a bit longer, juggling items, fine tuning shapes, adding textures
and eye candy.