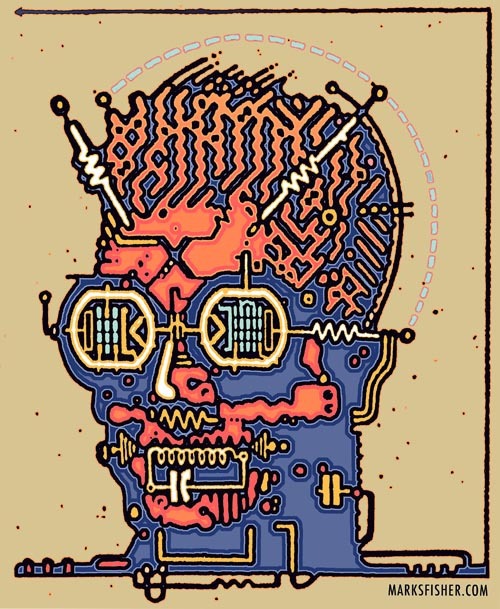 Electromagnetoman
Working in one style and sticking with it has never been something that I have been able to do.  I figure part of it comes from my influence from Push Pin Studio which blew me away by back in the early 70's. So many styles and approaches! They were a group but I was only one guy. Consequently my bag of tricks grew to include a few styles some of which lay dormant a while until they are called for.
I presently find myself working on a couple projects in a style I haven't played with for almost a decade and it is like seeing an old friend after a long absence.
Topical: Workonianisms
Latest
Martian Home My Toys A few more pieces of playing around 2022 Design Farm Calendar I got no title. My Latest Binge Creatures from the Mind Lagoon Creatures from the Dark Gloom Design Farm 2020 calendar PREPARE
Topics
Topics
Comicoids Fisherabelia Oddities & Endities Sketchbookian Stuff Workonianisms
Archive
Image Galleries
METAL MEN Royal Ray Guns Einstein's Shoelace Somnambulistic Sketches WHIZ BANG! LOOPY BAZOOKA Numbers Racket 5 Second Comics MummyTown SPITBALL COMIX AlphaBeasts Random Art from the Past Phavorite Past Post Personal Pictures Gyrocosmic Relativators Particle 17 Jupiter Jak Autotron Art Screed Alpha et Zeta Tables of Idiotic Stuff Season of the Witch Chicago Reader Heavy Metal Monthly Me Gourmet IT'S ME! A-Z
© 2022 Mark Fisher