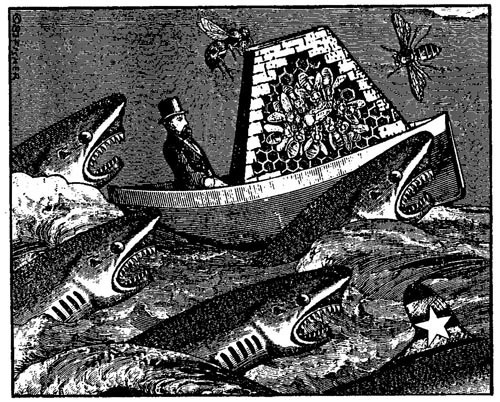 Industrialists
In 1981 I was asked by Bob Roth the managing editor of the Chicago Reader to illustrate a book that they would be serializing in the weekly paper over the next years time.
The name of the book escapes me but it dealt with the social, moral and political life of Chicago in the late 19th and early 20th Century. A time when Industry, the church and politics battled over the lives and souls of the people oftentimes with tragic consequences. Dover had a series of books out at the time with lots of old copyright free engravings which fit the time period so I proposed a series of collages using old engravings.
The project took a little over a year and resulted in around 60 collages.
Go over to my new gallery to see a few of the pieces.
Topical: Workonianisms
Latest
Martian Home My Toys A few more pieces of playing around 2022 Design Farm Calendar I got no title. My Latest Binge Creatures from the Mind Lagoon Creatures from the Dark Gloom Design Farm 2020 calendar PREPARE
Topics
Topics
Comicoids Fisherabelia Oddities & Endities Sketchbookian Stuff Workonianisms
Archive
Image Galleries
METAL MEN Royal Ray Guns Einstein's Shoelace Somnambulistic Sketches WHIZ BANG! LOOPY BAZOOKA Numbers Racket 5 Second Comics MummyTown SPITBALL COMIX AlphaBeasts Random Art from the Past Phavorite Past Post Personal Pictures Gyrocosmic Relativators Particle 17 Jupiter Jak Autotron Art Screed Alpha et Zeta Tables of Idiotic Stuff Season of the Witch Chicago Reader Heavy Metal Monthly Me Gourmet IT'S ME! A-Z
© 2022 Mark Fisher