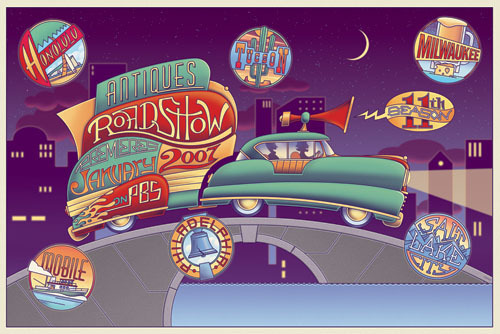 Finished poster
The poster I did for 11th season promotion of Antiques Roadshow is printed and out so I am posting it as well as some of the sketches preceding it.

It was done for WGBH in Boston who produces the PBS program.
The design team there at GBH are a great bunch to work with.
This project was done under the fine design direction of Dennis O'Reilly. A big part of a designers job on a project like this is to keep the ball rolling on their end - what with all the eyes and hands in the approval pot. This was important since there was a month to do the art which may sound like a lifetime but with my limited schedule it isn't. Since I would not be there to present the sketches and subsequent stages Dennis and I had to be on the same wavelength as far as answers to questions and concerns.
All went quite smoothly.

Roadshow wanted to play up the 6 cities they visited this season.
The poster would be 36"x24" and the art would be used on an
8 1/2"x 6" postcard as well. The only requirement was the band of sponsors that had to appear on both pieces. 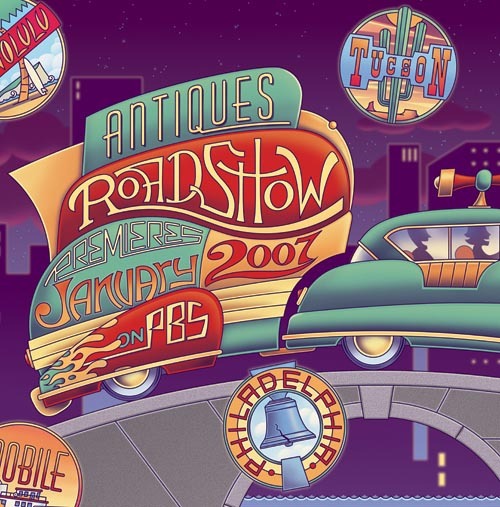 There is a lot of grain and some texture that just gets lost in the translation down to 72dpi.
A close up. 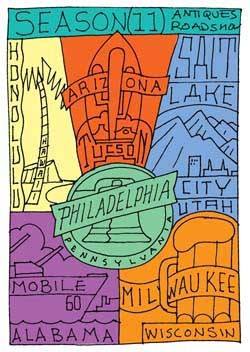 A composition of luggage labels.
Some of the sketches 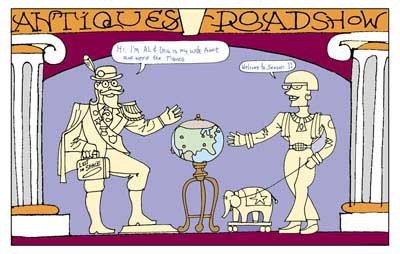 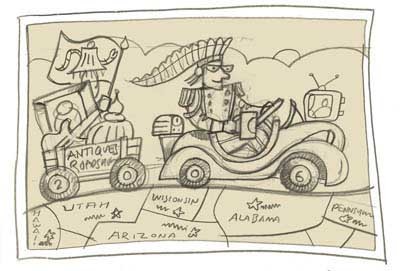 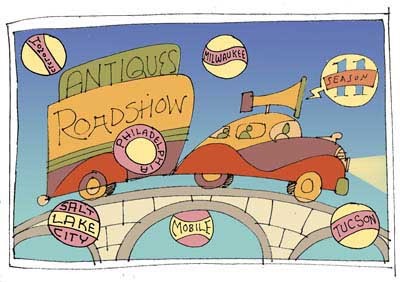 I saw this as a trailer being pulled by the shows team. The circles would be like planets of the cities.
The chosen sketch 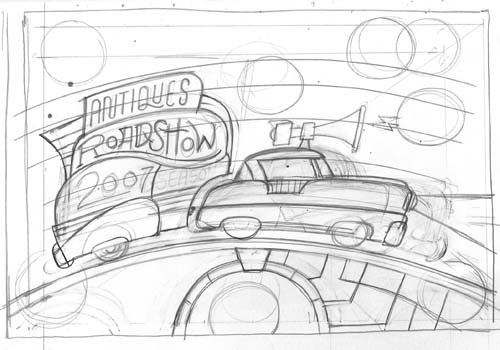 Preliminary drawing to starting the finished piece.
A pencil sketch to work out the forms.
As the art progressed the planet / city orbs became non 3d but more the luggage labels from the first sketch idea.
The auto in the original sketch felt too '30's compared to the feel of the trailer in this drawing which I liked a lot  but was more of a '40's-'50's era feel. So I zoomed ahead to a boxier and bulbous style.
The finished piece starts with a line drawing in vector art based on a pencil scan. All additional lettering is worked out on pencil and paper, scanned and imported then drawn in vector.
Then when I have the ' wire frame' drawing where I want it I import it into a raster program. From there it's like a big coloring book only with multiple layers and fills.
Topical: Workonianisms
Latest
Martian Home My Toys A few more pieces of playing around 2022 Design Farm Calendar I got no title. My Latest Binge Creatures from the Mind Lagoon Creatures from the Dark Gloom Design Farm 2020 calendar PREPARE
Topics
Topics
Comicoids Fisherabelia Oddities & Endities Sketchbookian Stuff Workonianisms
Archive
Image Galleries
METAL MEN Royal Ray Guns Einstein's Shoelace Somnambulistic Sketches WHIZ BANG! LOOPY BAZOOKA Numbers Racket 5 Second Comics MummyTown SPITBALL COMIX AlphaBeasts Random Art from the Past Phavorite Past Post Personal Pictures Gyrocosmic Relativators Particle 17 Jupiter Jak Autotron Art Screed Alpha et Zeta Tables of Idiotic Stuff Season of the Witch Chicago Reader Heavy Metal Monthly Me Gourmet IT'S ME! A-Z
© 2022 Mark Fisher