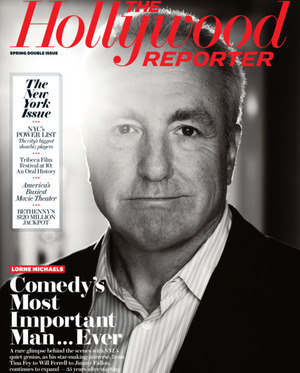 Last week I got a call from the Hollywood Reporter.   They were doing a special issue on Lorne Michaels and wanted a full spread illustration of him at the center of the Last Supper, with famous SNL writers and actors as his disciples.  Sketch Friday, final Monday.   My first reaction was, 'no way'.  I didn't think I could turn it around in that time.   Also, historical riffs are not what I usually do so I wasn't sure if I could pull it off.   The AD at the Hollywood Reporter is Shanti Marlar, a long time friend, and I wanted to try to make this work.   I decided I couldn't do a painting in that time and instead went with the idea of creating a parchment like drawing, or something that would look like a study for the Last Supper.  I've never tried that before but I like the challenge of trying to figure out something new. 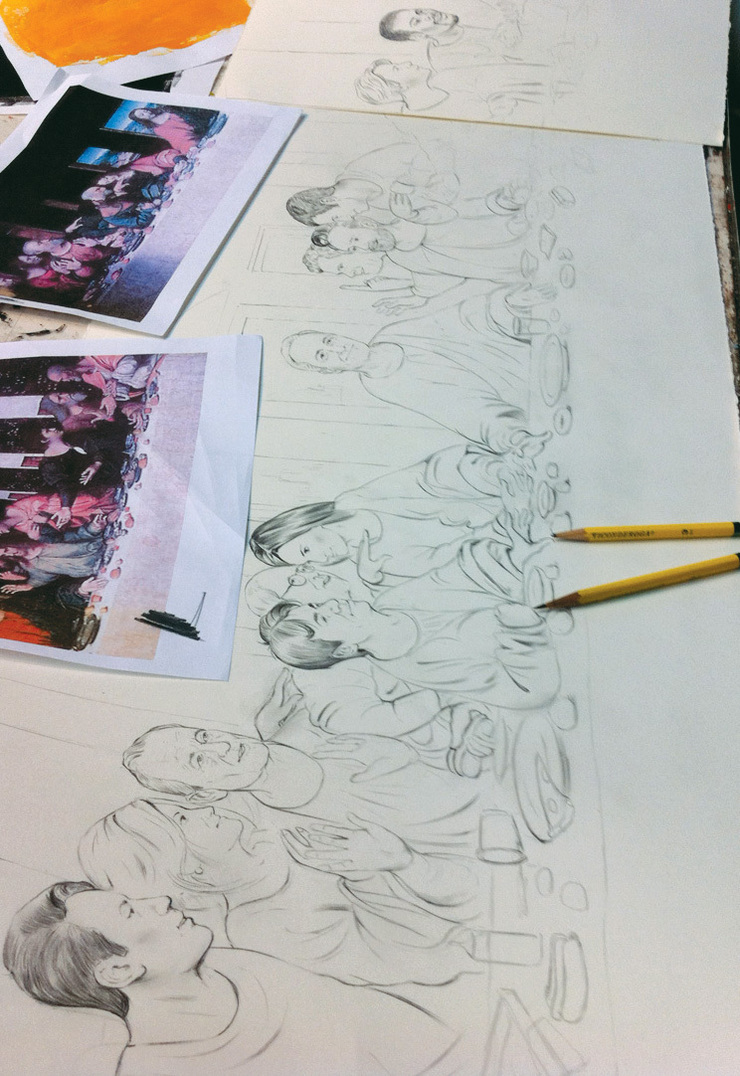 The first step was to draw the entire composition.  I grew up looking at paintings of the Last Supper.  Coming from a Catholic family, it was in most of the houses I went to when I was a kid.   Still, I had to find some good reference!   I had some nice Rives paper and ended up having to do the drawing over two large sheets because I needed the room to work out the likenesses.  The drawing is about three and a half feet wide.  As I was drawing, I thought it would be funny to add typical New York food on the table, hot dogs, pizza, bagels, etc., and a view of NYC out the window, as if they were all at a writer's meeting at Rockefeller Center. 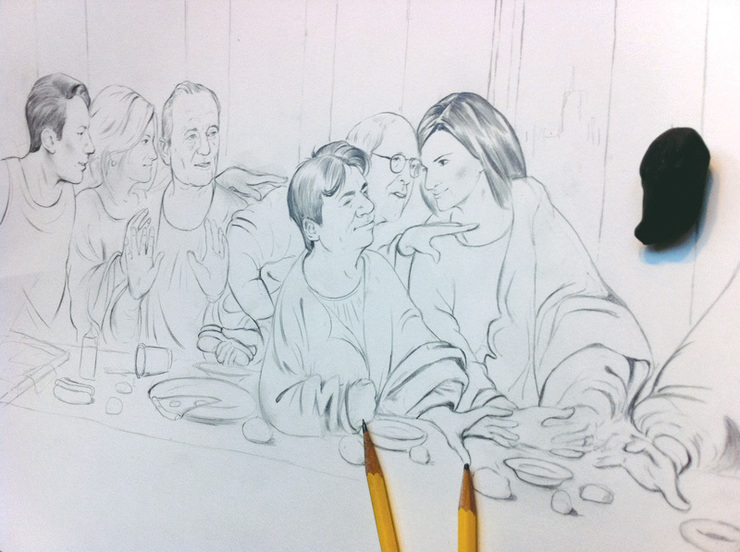 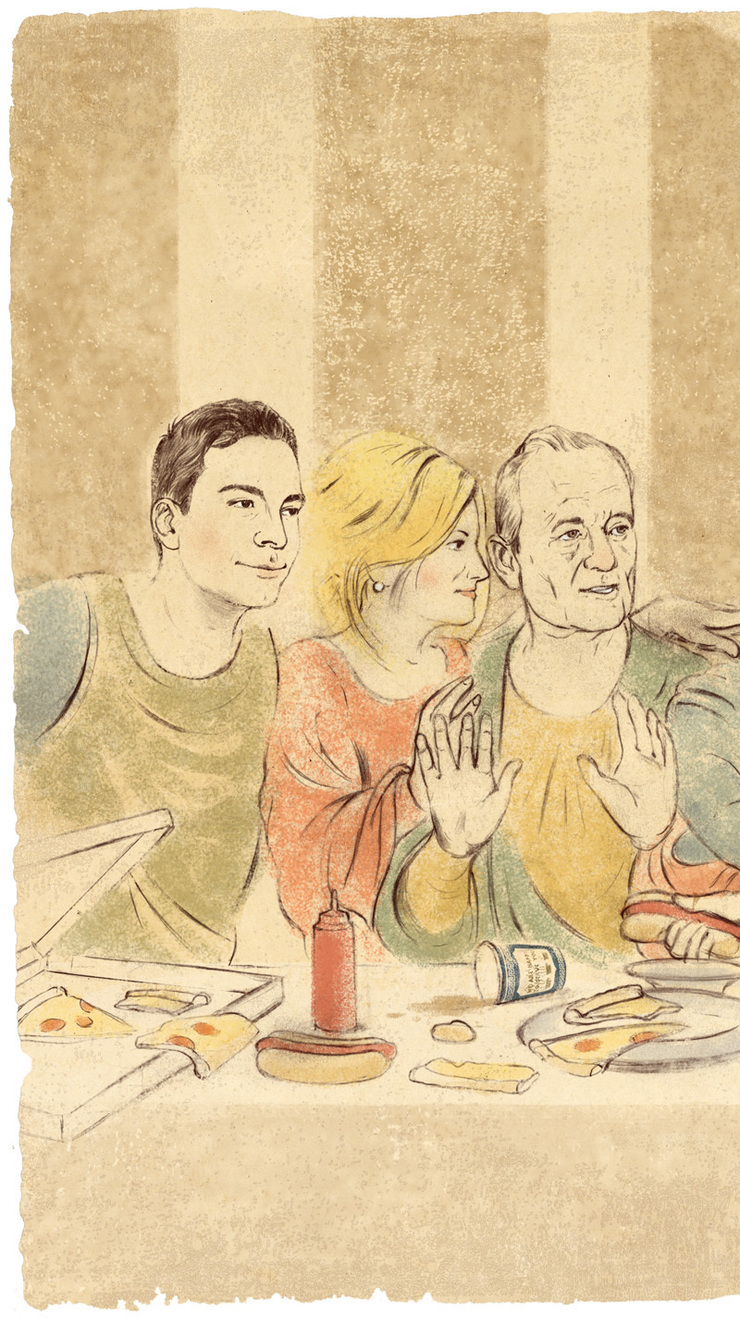 Jimmy Fallon, Amy Poehler, Bill Murray
In order to have a bit more control over all the elements, and considering the short time frame, I decided to color the entire image digitally.   This was a new thing for me.  Whenever I work digitally, I usually use very flat colors.  Creating a parchment background and a pastel color base took some time to figure out, but once I created some brushes it all started falling into place.   I don't like using a wacom tablet, did this whole thing old school with a mouse.    I scanned in some of my textures from printmaking sessions and put all the pieces together.   This was fun to do and I learned a lot of new things along the way.   This issue of the Hollywood Reporter will be out on Thursday, just in time for Easter! 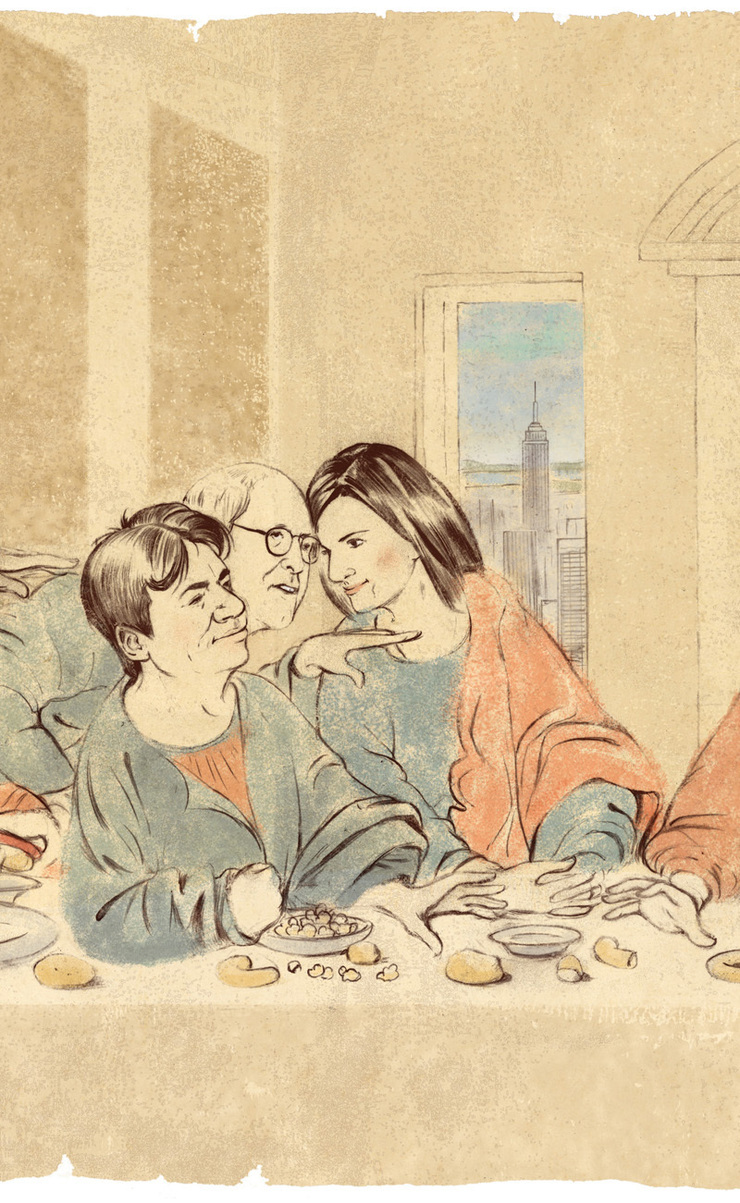 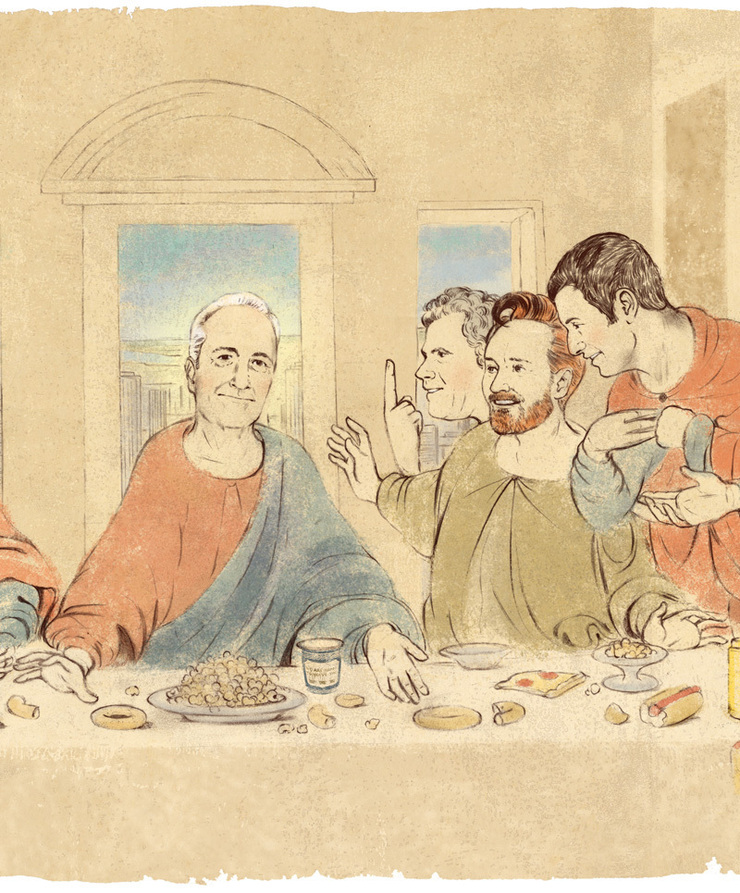 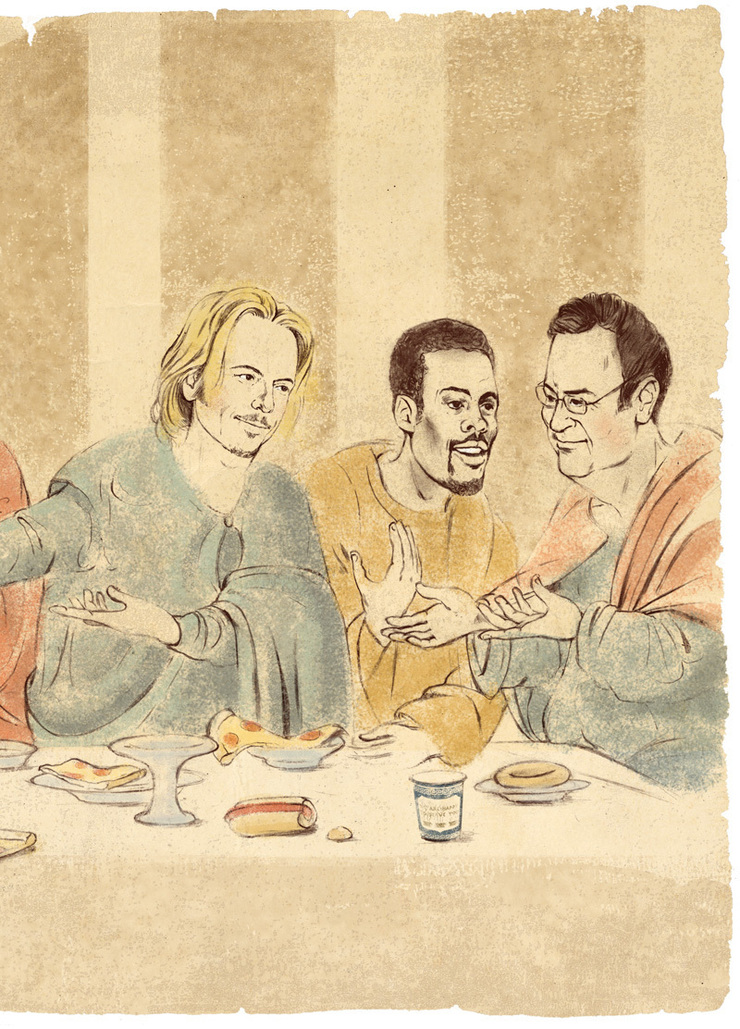 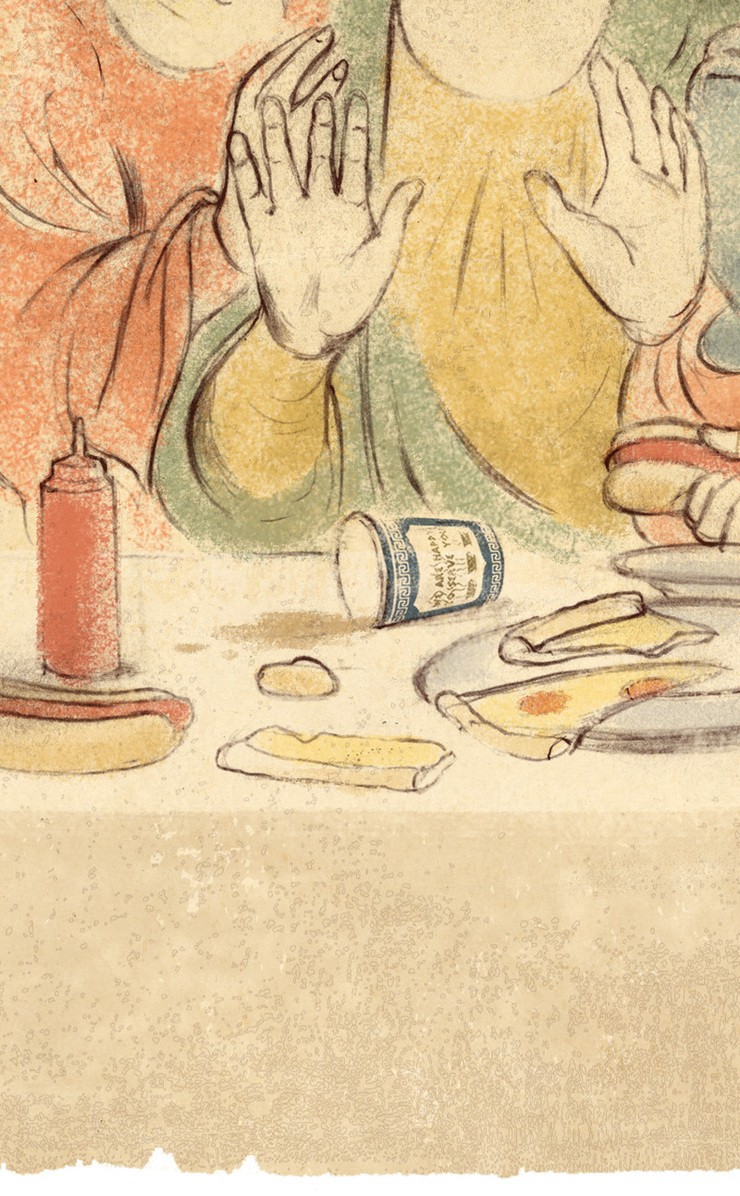 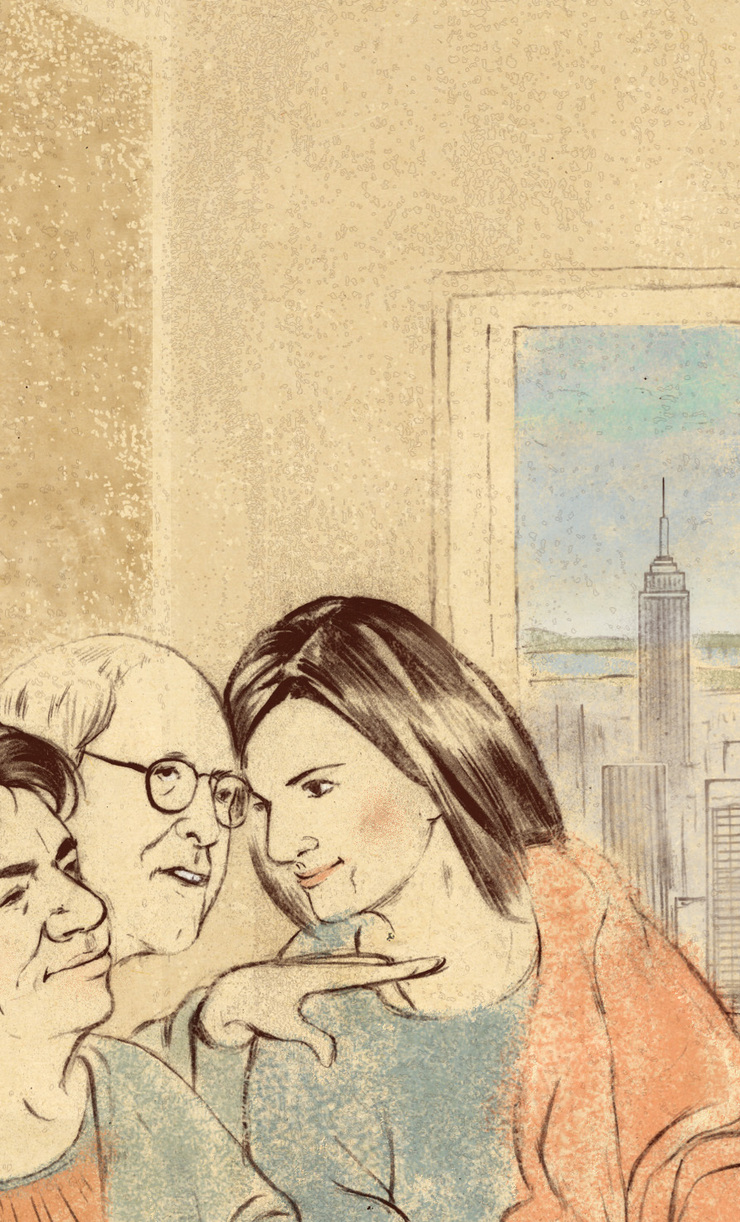