I Need a Web Posse! 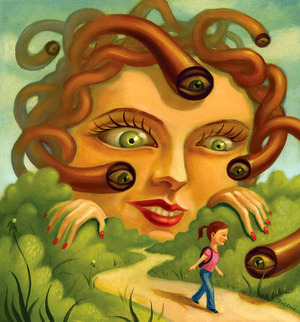 Big Mother/Boston Magazine/May 9, 2006
I find my images used on the web, without my permission, all the time. But this time it really pissed me off. A CBS journalist used one of my old illustrations, originally for Boston Magazine called "Big Mother", to illustrate his rant on health care without my permission. He has since taken it down but his reply made me nuts. His opinion seems to be a growing opinion when it comes to using images on the web. Scary! Especially, with the death of print, and a majority of our images will be for online-usage only. If you get a chance, read his replies in the thread - Big Mother

Also here is one of his recent email replies.

I get paid for what I write, not for the illustrations accompanying them. If I had to get permission for every illustration I used I wouldn't have time to get any illustrations on my articles and would likely not make any money.

So I developed this policy, which usually works. I seek to give credit. When I can find one, I even seek a place where the illustration's being sold, and link to that.

I used to just link to the illustrations, but I was accused then of stealing bandwidth.

No one is going to take a 200 pixel reproduction of a larger piece and call it art. No one is using it as anything but eye candy, and those who like it are going to use links to seek it, and the artist, out.

I don't know how to get this through to you. I didn't steal from you. I didn't rob you. I sought to publicize you. And was called a thief for my troubles.