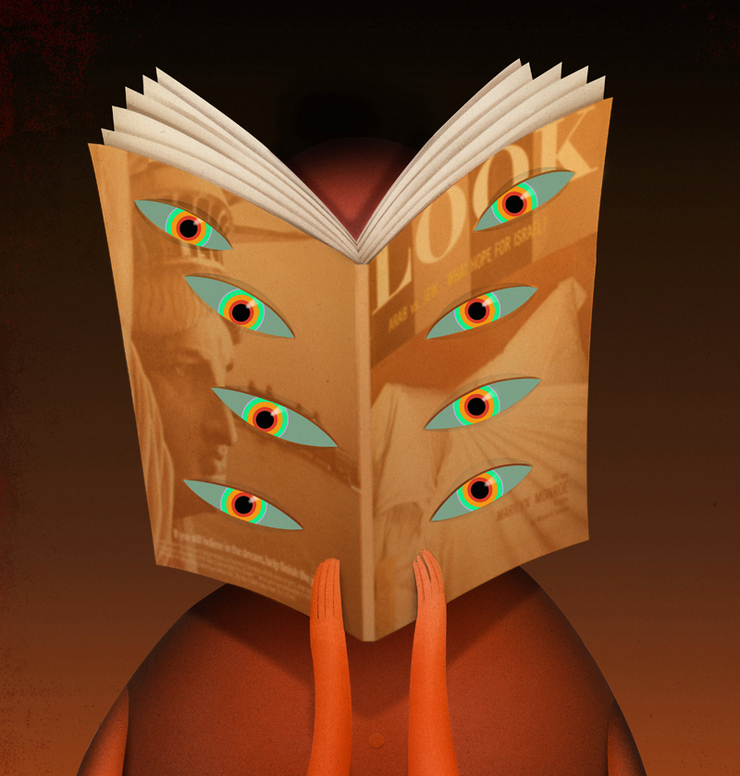 Here's a new little illustration for the New York Times this weekend. A feature article about the data sharing trail.The writer Follows the trail of just how much trading information is going on."If you have ever felt inundated by such solicitations, by e-mail or by snail mail, you may have wondered what you did to deserve it. I did.I wondered how all those campaigns, companies and institutions got my number. And how much money data brokers behind the scenes might make by flipping my name and address."


Minh Uong had called me but the last two times he calledÃÂ  we were out of town. The one LastÃÂ  week on Google...I was kicking myself about, so I was thrilled to get another call from him this week. Thumbnails start our the same way as usualÃÂ  (1-7)I was really thinking more about the digital side of someone being spied on or the invasive side of having everything you're reading scrutinized . Mihn got me on the track of the Magazine, saying he thought it was an important par of the visual story (8-`12 ). 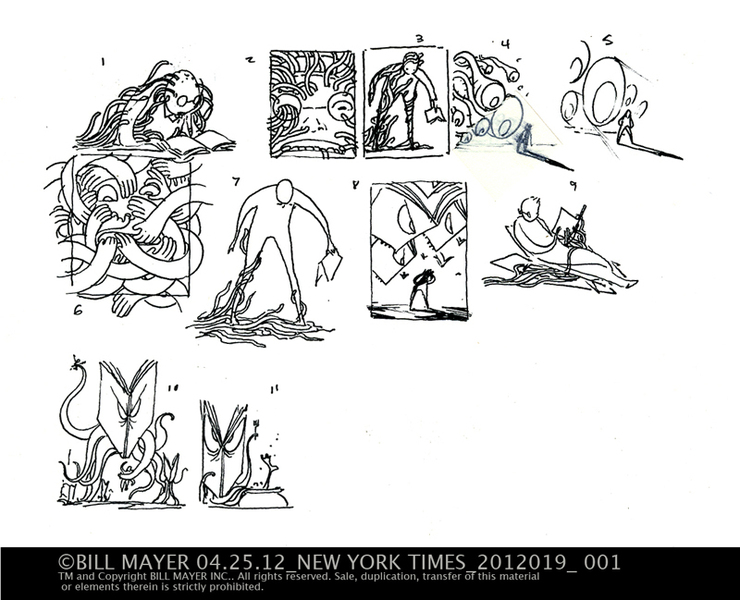 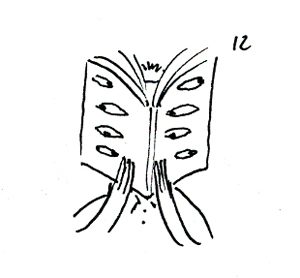 After sending the thumbnails over to Minh, we met some friends for lunch . On the way home I had one more little idea and did a quick thumbnail and shot it off to him to get  some feedback. Minh said he'd get back to me as soon as he could. I knew it would be a bit so .went to the mountain for a nice walk. When I got back he had left a voice mail and an email saying did you get my voice mail.Tthey picked #12 , but could I make it a bit more vertical, really he left the size was up to me, just give him a tighter sketch to work his layout around....I did a couple of new thumbnails trying to get the perorations of the figure a bit better. ended up with this stylized version. and one with a Figure reading standing with a weeny dog on a leash. He thought the latter was a bit too "New Yorker" so we went with the "A" version torso only. 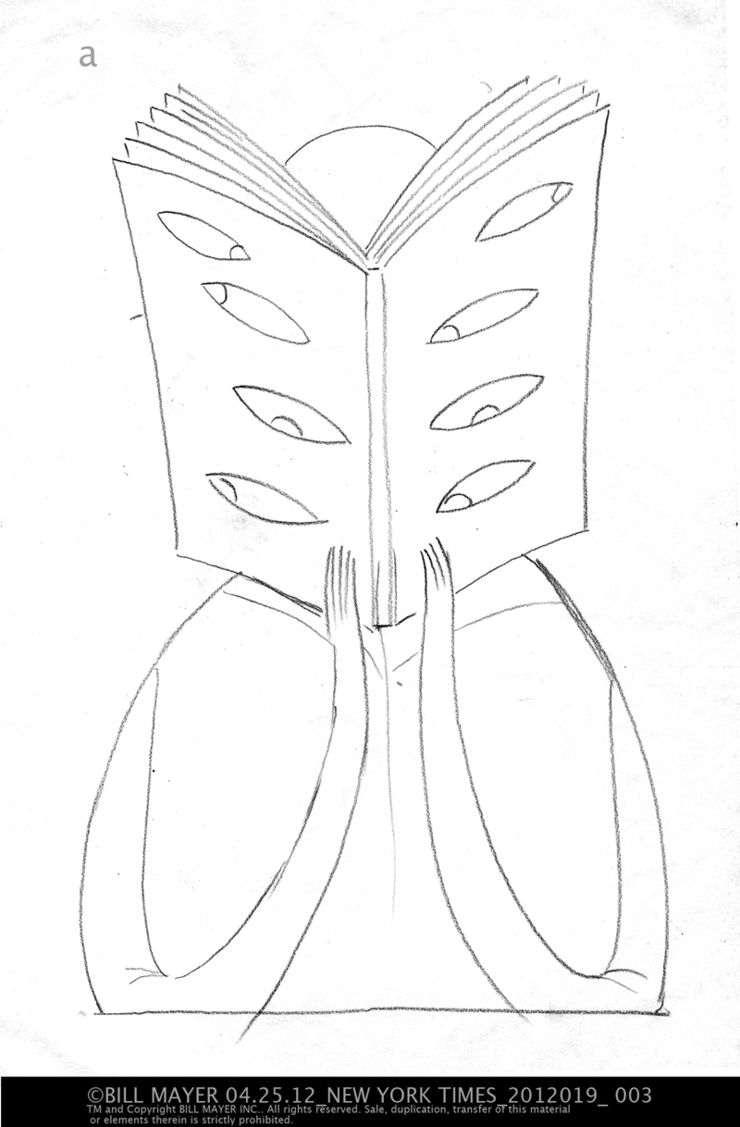 I got in pretty early and started working on the airbrush drawing.Thngs went faily fast and by noon I had that done and scanned and was starting to put some colors together. it was pretty simple so I was trying to make the whole thing colorful...
Minh had said to make sure it looked like a magazine, and with the color pallet moving tward the warm colors I was not sure the shape of the magazine would pull that aff on it;s own. At leats not as quickly as if I added something on the cver. "Look" seemed to be the perfect out of print candidate. Minh says " some thing that's not a playmate..." .Heading to the attic to sort through old magazines can be a quagmire. Finding the cover was pretty easy. Finding the back that was not a cigarette ad proved to be a bit more challenging. But scanned them in did a little editing...and bluring tweaking the colors...and noise so they didn't draw too much attetion...Now that seemed to fit in., 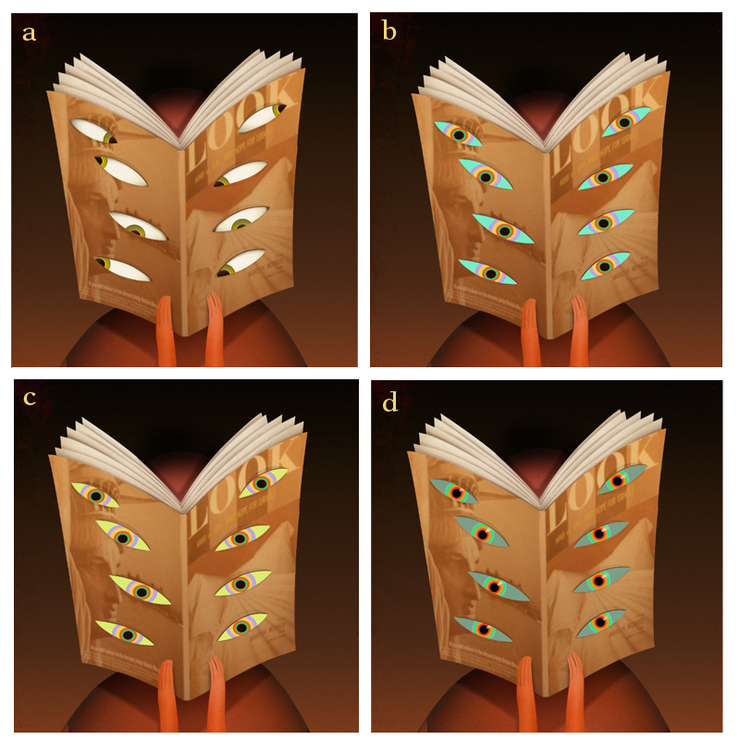 I had most of the  colors worked out and ran into one hiccup. The eyes, the eyes I had drawn in my sketch were looking all in different directions. I tried this several times in different colors. everything I could think of but it just looked odd. I scrapped that and kept the eyes straight ahead looking at the reader. I liked the color they added and I knew it was different than the sketch but to me it still seemed to work conceptually. I thought let's just take a break and get away from it, maybe when I look at it fresh it will come to me how to solve this little problem. Looking back I think any of these options straight forward would have worked. 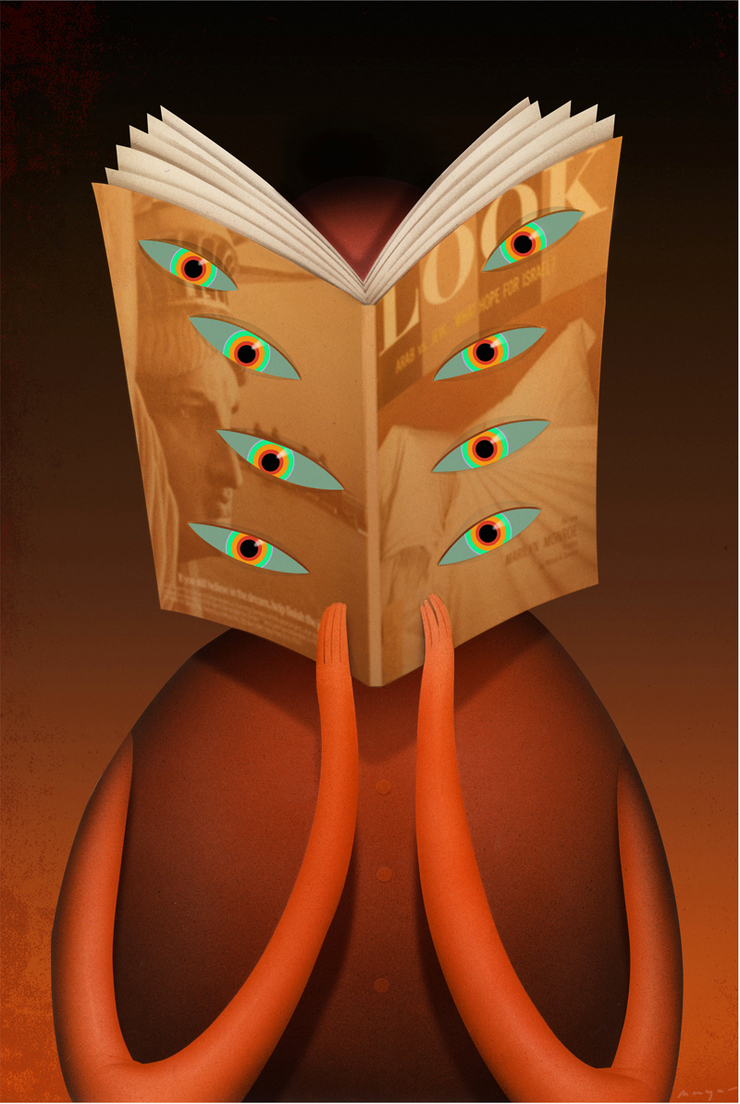 ÃÂ© Bill Mayer 2012 for The New York Times
The the plan was just to take a short break and go climbing with some friends but one thing lead to another and it was closing in on midnight and obvious I was not going to make it in tonight.
The art was due at noon and I was supposed to be in court in Lawrenceville,a forty minute drive at 10:00. I hit the studio early  6:am, tweaked the drawing played around with the eyes but still couldn't get it to work, I liked the eyes straight forward. I sent the art to Minh and hoped he would agree.... I went ahead and uploaded the High rez file and sent a link to him...8:50... I left a voice mail and hit the road...I called Minh after court and He agreed the eye thing worked better staight forward... Much thanks Minh

After thoughts
Never stop wondering what things would tweak the little drawing to be a little better ?So i thought I would do a little dialing in the hues and see what it would generate. 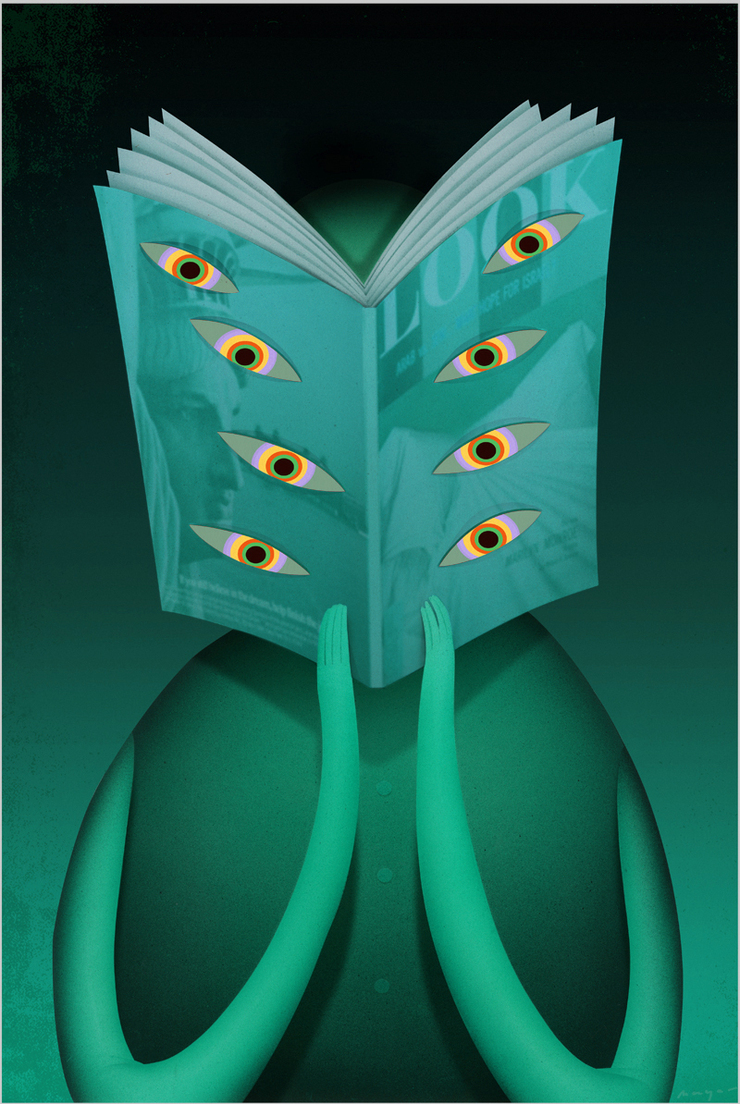 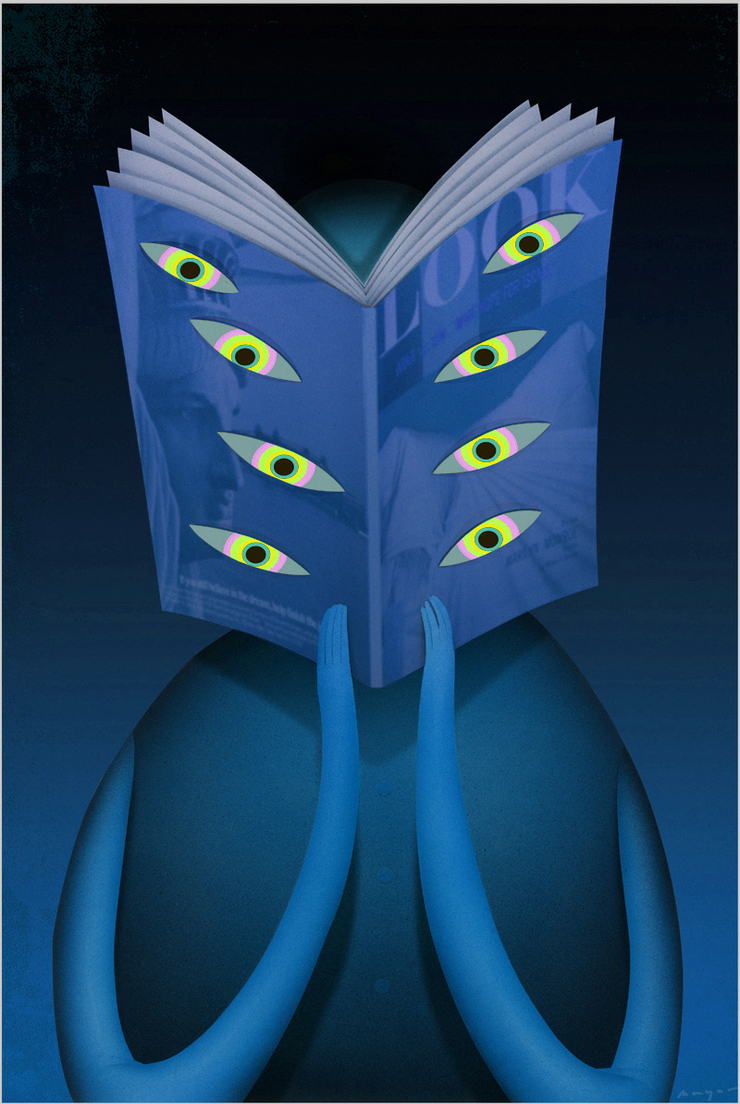 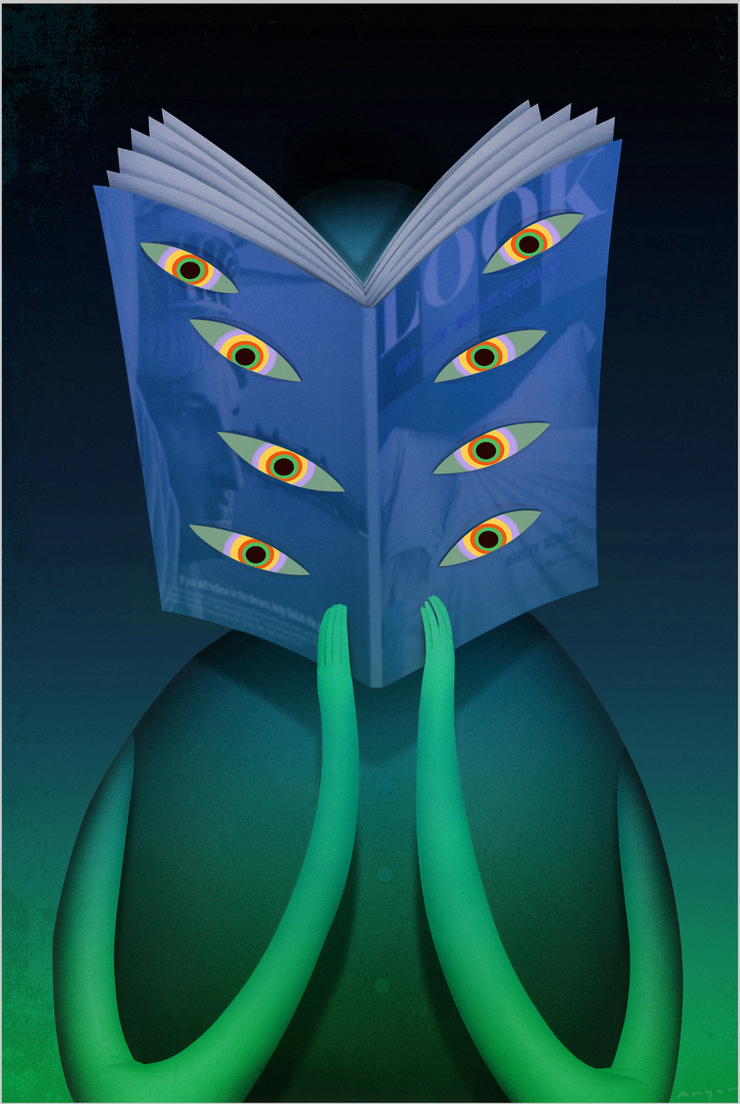 Maybe somewhere in between,,,,
Strange , it gives it a totally different feeling...I never use cool pallet. but it gives it a dreamy quallity... 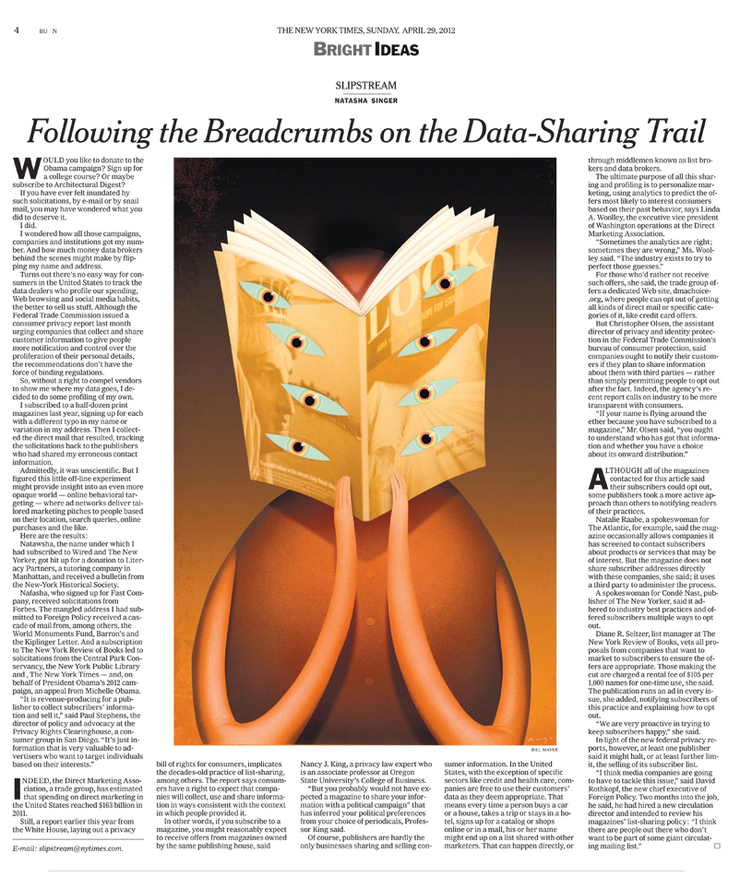